What to do in Krakow is a question that is both difficult and easy to answer. Until 1609 it was the capital of Poland and today it is the second largest city in the country. Located on the Vistula, this city has developed into one of the nicest destinations in Europe. It's no wonder that Krakow has quite some amazing tourist attractions, and that immediately makes it difficult to choose the best out of those. It's one of the only cities in Poland that wasn't destroyed during the Second World War and in 2000 it even was the European cultural capital. After visiting this beautiful city, these are the ten nicest things to do in Krakow in my opinion.

Do you want to book tours and excursions in Krakow?

Check out the options with these tour operators.

Although this list is written in random order, you should absolutely visit Auschwitz when you’re visiting Krakow. It’s in fact a bit outside Krakow (about 70 km or 43 miles), but you can easily reach this creepy place by public transport. It doesn’t matter how many movies you have seen or how many books you have read about the Holocaust, it only really gets through when you walk around here. When you see the glasses, suitcases, hair and even ashes of the Jewish victims, you’ll body get chills spontaneously. Everyone should see Auschwitz at least once in their life to get a real picture of the horror that happened here. 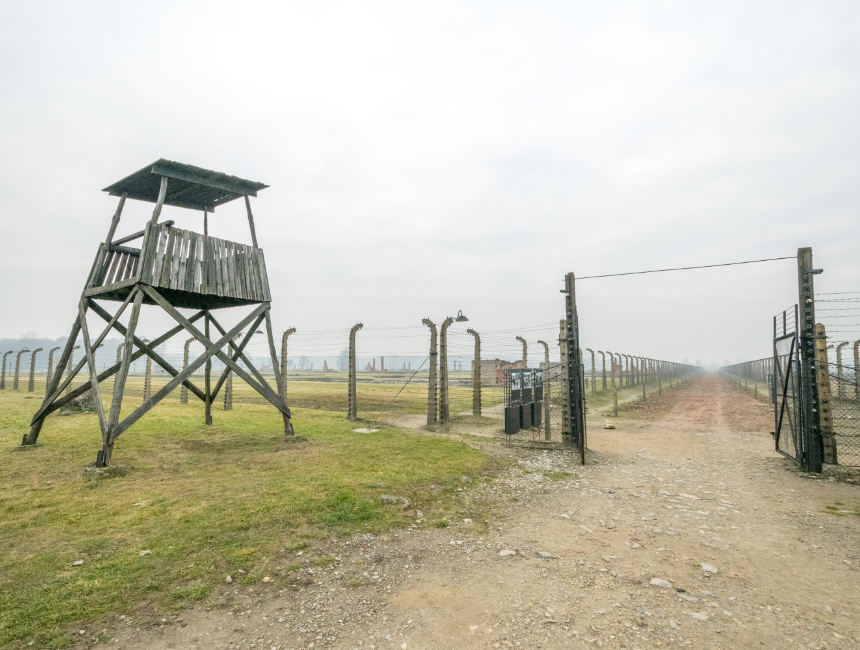 Again, this is not exactly in the center (13 km / 8 m outside), but together with Auschwitz, the Wieliczka Salt Mine is one of the most popular half day or day trips from Krakow. More than 300 kilometers (186 miles)  of tunnels are spread over nine floors, with the deepest one being 327 meters or  almost 1000 feet underground. 22 of these rooms (up to a depth of 135 meters or 442 feet) are open to the public via a guided tour. In addition to genuine underground lakes, there are also a number of impressive chapels, of which the Saint Kinga Chapel is the crown jewel of the collection. Because of the size of these mines, there’s even a huge underground church! This unique attraction is almost impossible to miss.
I advise you to buy your tickets online and in advance, because waiting lines can get long. Tickets are sold for €21. 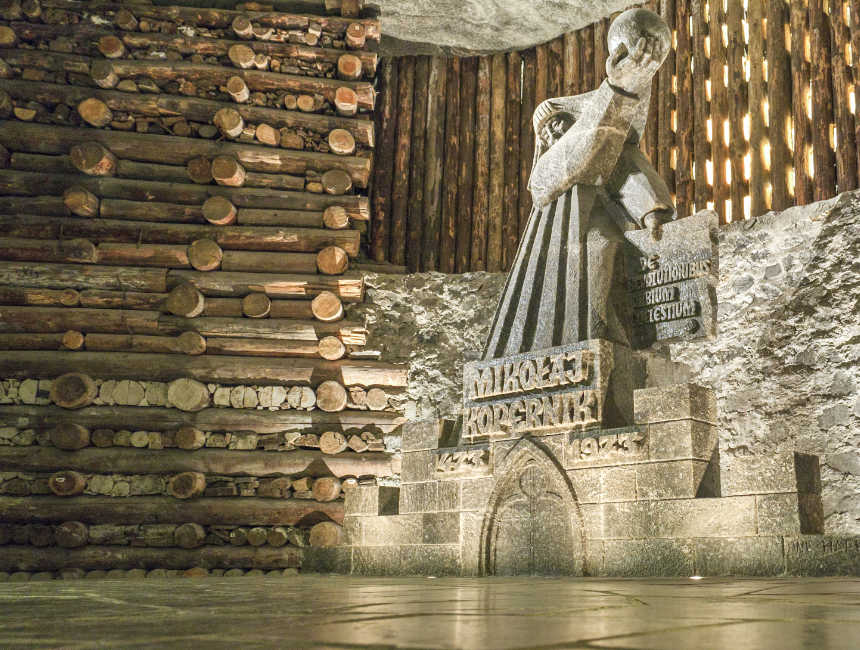 The Wieliczka Salt Mine is located close to Krakow and is anything but boring! There is even an underground church!

This fairytale castle was the political and cultural heart of Poland during the sixteenth century and is thus a symbol of their national identity. Today it’s a beautiful museum with five different departments: The Royal Treasure and Arms Room, Oriental Art, Lost Wawel, State Rooms and the Royal Private Departments. Of these five, the last two are the most impressive. You pay a separate ticket for each department or one ticket for all of the different parts. Such a ticket costs €28 and includes a live guide. 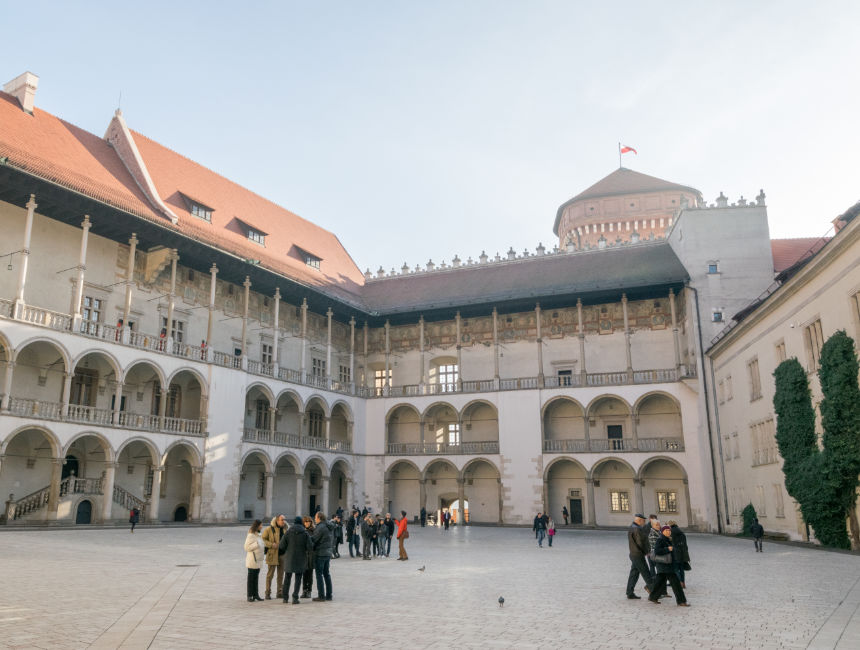 There is so much to do in the castle of Wawel! You can easily spend a whole day in all the beautiful museums.

Anyone who has not yet seen Schindler’s List should do so immediately. And after you’ve watched this movie, you should go to Krakow to see his factory with your own eyes. This building now serves as an interactive museum that tells the wonderful story of this remarkable man. On top of that, it gives a nice picture of what the city looked like during the German occupation during the Second World War. This is one of the best places to visit in Krakow if you’re interested in World War Two and the impression it left on the city.
Tickets for this interesting factory only cost €7,50. If you want to have a guided tour as well, you pay €18 per person. 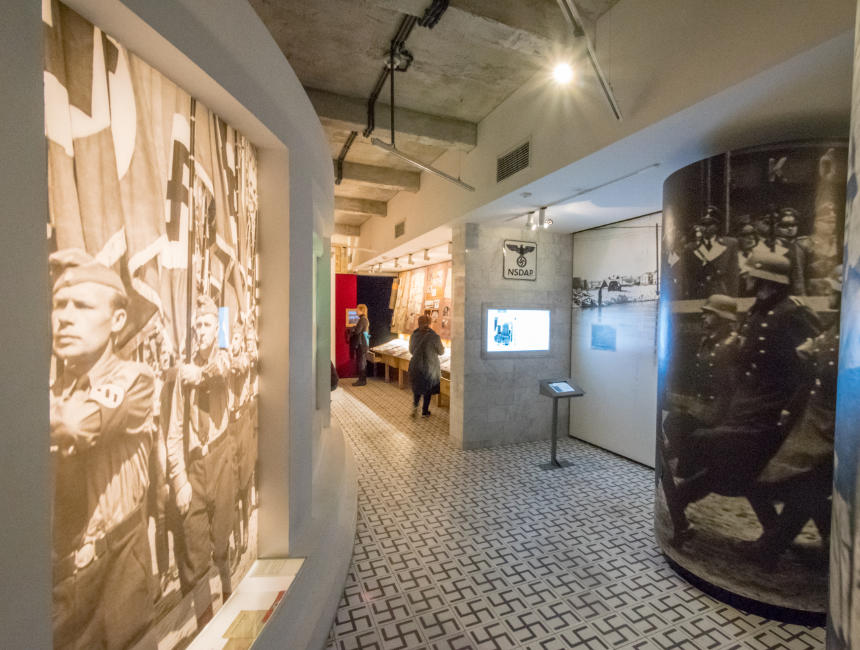 In the Factiry of Oskar Schindler you’ll not only find the desk of Schindler, but also a gigantic museum about the World War!

The St. Mary’s Church in Krakow is very striking because it’s made out of bricsk, which makes it look very different than most other European churches. In addition, the two towers are different in length. According to a popular legend, they were built by two brothers who both wanted to build the highest tower. To definitely come out as the winner, one brother decided to kill the other. The knife that was used for this, is exhibited in the church. The St. Mary’s Church is located on the biggest square of the city and was built on the foundations of a church from the early thirteenth century. This building had to make way in 1355 for the construction of a new Gothic church, which has been called a basilica since 1962. Don’t forget to go inside as well, because there are some beautiful artworks that you can see. 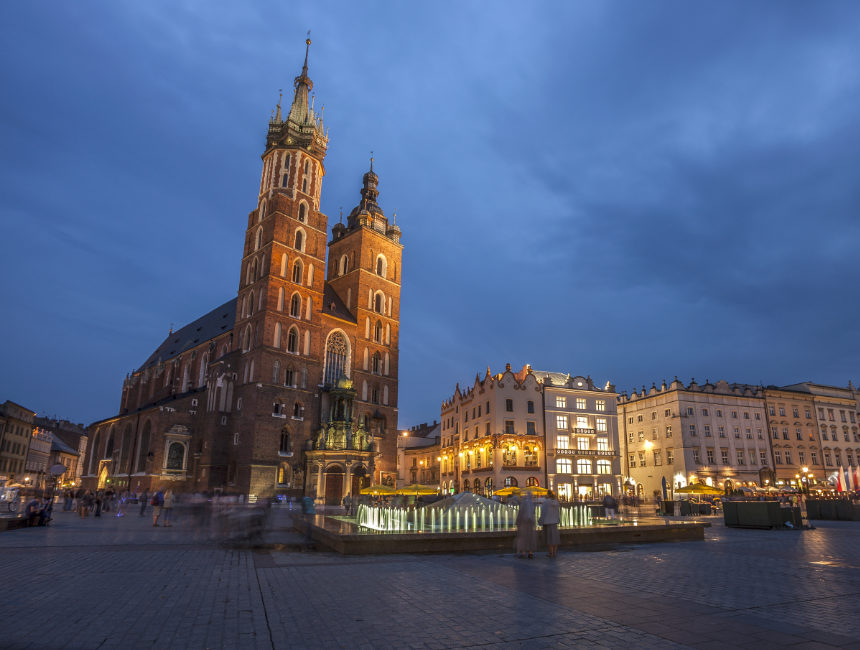 The St. Mary’s church of Krakow. Without a doubt the eye-catcher of the Stare Miasto or the old city.

Just like the Wawel castle that I’ve mentioned before, this cathedral is located on the Wawel Hill. Since this impressive structure emerged from nowhere in the fourteenth century, many kings were crowned and buried here. Chapels and royal crypts, including sarcophagi, are among the attractions. In addition, you’ll also find the largest historic bell in Poland, which is proudly hanging in the clock tower. From up here you also have an excellent view of the city. It’s not allowed to take pictures inside, but I promise you: your eyes will love every single thing here!
Tickets cost €5 if you buy them there and €4,50 if you buy them online. 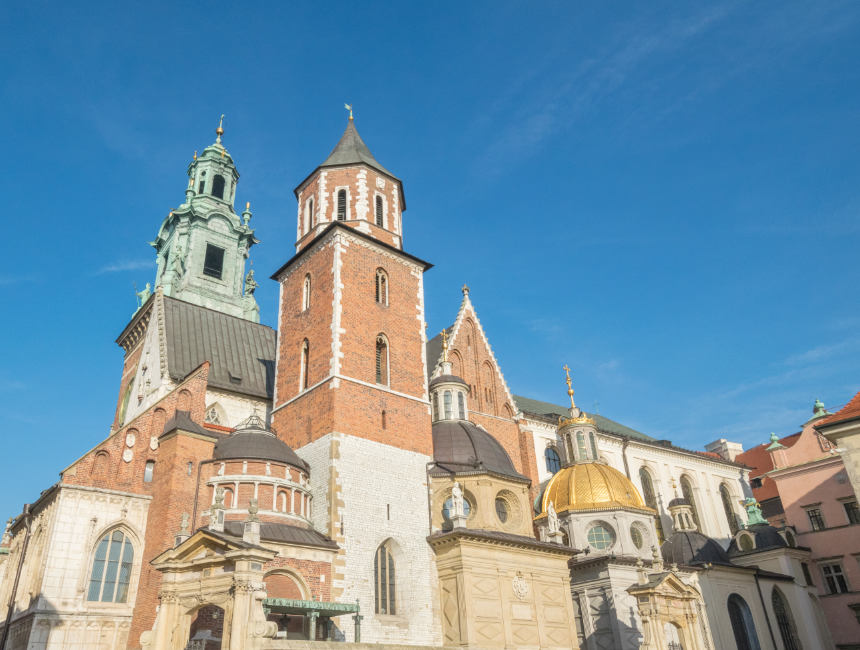 The exterior looks like a hotchpotch of all kinds of styles, but the interior… Wow!

On the main square (Rynek Główny), you’ll find the legendary restaurant ‘Wierzynek’. In 1364 Mikołaj Wierzynek organized a party for the wedding of the granddaughter of the Polish king Casimir The Great. 653 years later, royal dishes are still served here at an extremely affordable price. Here both “normal” and exclusive dishes are served as slow food. Famous guests that already have visited this place include Kate Moss, Wentworth Miller, several Polish presidents, Jim Carrey, Fidel Castro and Charles de Gaulle. If you want to enjoy the best that Polish cuisine has to offer, you should definitely reserve a table on their website. Is everything booked already? No problem! The Polish cuisine is surprisingly tasty, and there are in fact a lot of great restaurants in this cozy town. 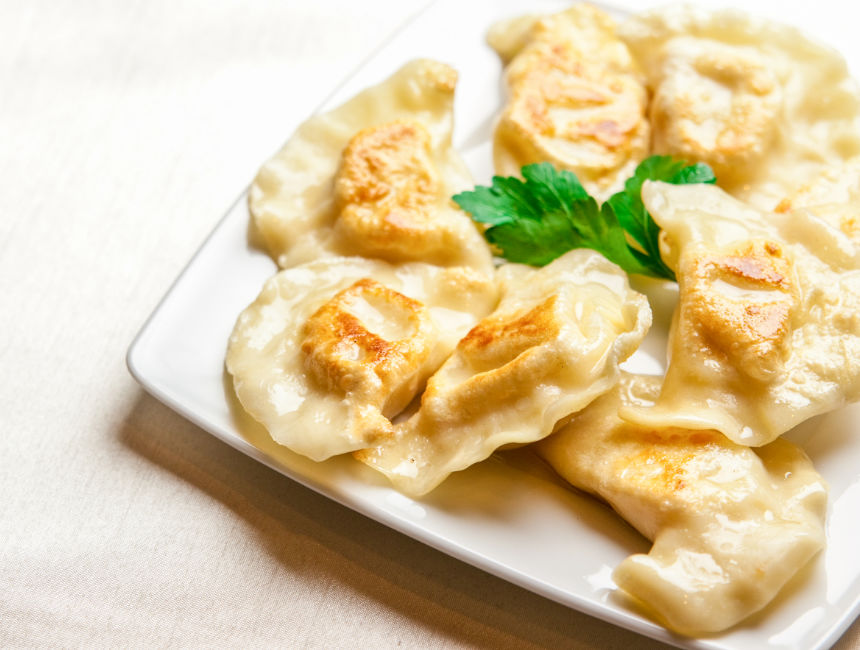 When you first admire Rynek Główny, one of the first questions you’ll ask yourself is the following: “What’s that building in the middle of the market?” Now you finally know the answer because it is the Sukiennice, Krakow’s Cloth Hall. This used to be a flourishing trade center where salt from the Wieliczka salt mine was sold. Nowadays, salt has had to make way for souvenirs and artisan products. The first floor is decorated as a museum with an impressive collection of Polish paintings and sculptures from the nineteenth century. If this does’t interest you a lot, you should walk around the building in the evening, when it is beautifully lit. 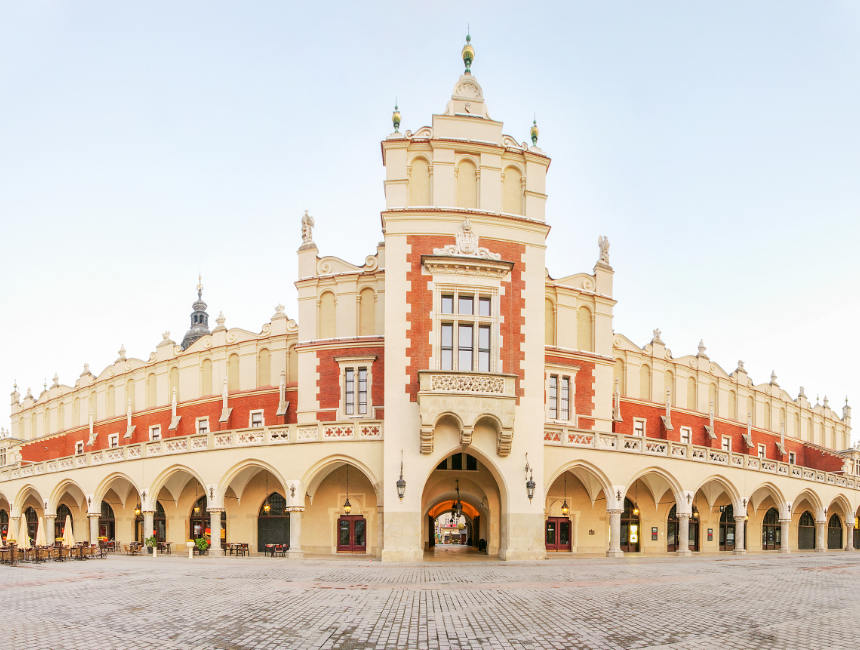 This burial mound is dedicated to the Polish (and American) war hero Tadeusz Kościuszko. The monument was founded shortly after his death. This brave man fought both for American and Polish independence and that eventually gave him this 34 meter (111 ft) high memorial. In his honor, they have also placed land of the Polish and American battlefields where he fought. Furthermore, you have a sublime view of the city from this location. 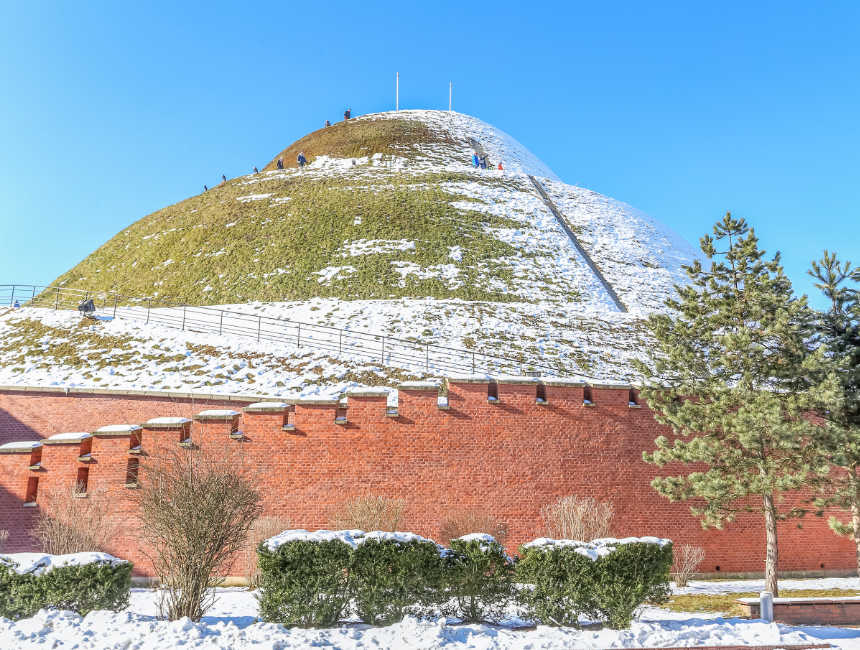 From the Kościuszko Mound you get a nice view over Krakow, but the monument itself is also… Interesting!

Even if the churches or other buildings tell you little to nothing, you still have to stroll around the Stare Miaso, or the Old City. This UNESCO World Heritage Site is one of the finest and most extensive market squares of Europe. On top of that, it’s the perfect place for delicious dining (or lunch) in one of the many restaurants. Or perhaps it’s the perfect place to taste the delicious Polish vodka (Żubrówka)?! 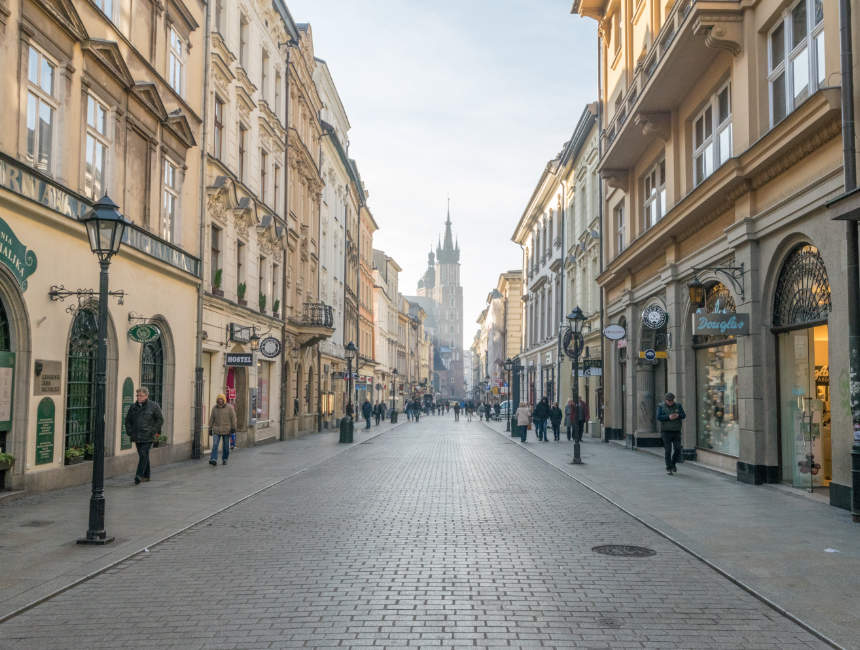 Cozy streets, great restaurants, beautiful historic buildings, … You will fall in love with the old city of Krakow!

Krakow is without a doubt one of the nicest cities in Eastern Europe. You have plenty of cool, unique and even haunting attractions, making the city perfect for a city trip. Because of the many cozy bars and discotheques it’s also an excellent destination for a bachelor weekend. Either way, there are so many places to visit in Krakow that you can hardly get bored.

Tours and excursions in Krakow

Let yourself be taken to the most beautiful attractions in and around Krakow! Poland is not an expensive country, so tours and excursions aren’t very expensive. Curious about what you can book? Get inspired, or book your tickets online.

» All tours and excursions in Krakow

Visit Poland in one week

Getting from Krakow to the salt mines of Wieliczka + what to do and see?