Meknes is one of the four Imperial cities of Morocco. The most centrally located of these cities is also the smallest, and therefore has a lot less sights in comparison to its royal brothers and sisters. Yet, a city isn't called the "Versailles of Morocco" for nothing!
The walled city boasts with its beautiful squares, hidden treasures and exceptional sights. I would even dare say that the Souk of Meknes is the most beautiful one that I encountered in Morocco! 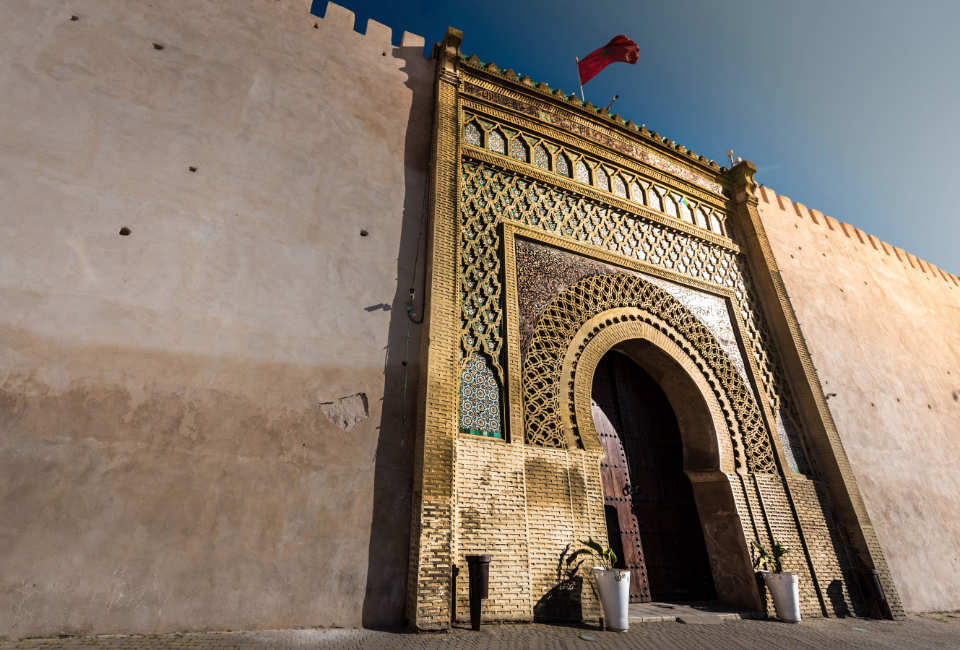 1. The Souk of Meknes

Next to the main square of Mèknes, you’ll find a huge building with several restaurants and market stalls in front of it. Don’t be put off by all these pushy sellers and just make your way to the beautiful interior of the Souk of Meknes.
Inside the building you’ll find a gorgeous color palette, an impressive mix of scents and perfumes and a small overdose for your senses.
In one hallway you’ll see giant amounts of herbs and dried fruit. Right next to this, a few fresh cadavers and chopped animal heads dangle. Slowly coloring the floors red.
A Moroccan Souk is a bit like a museum of the local habits and delights. You can’t leave Morocco without having strolled into a Souk. And believe me: there’s no better one to explore than the one in Meknes! 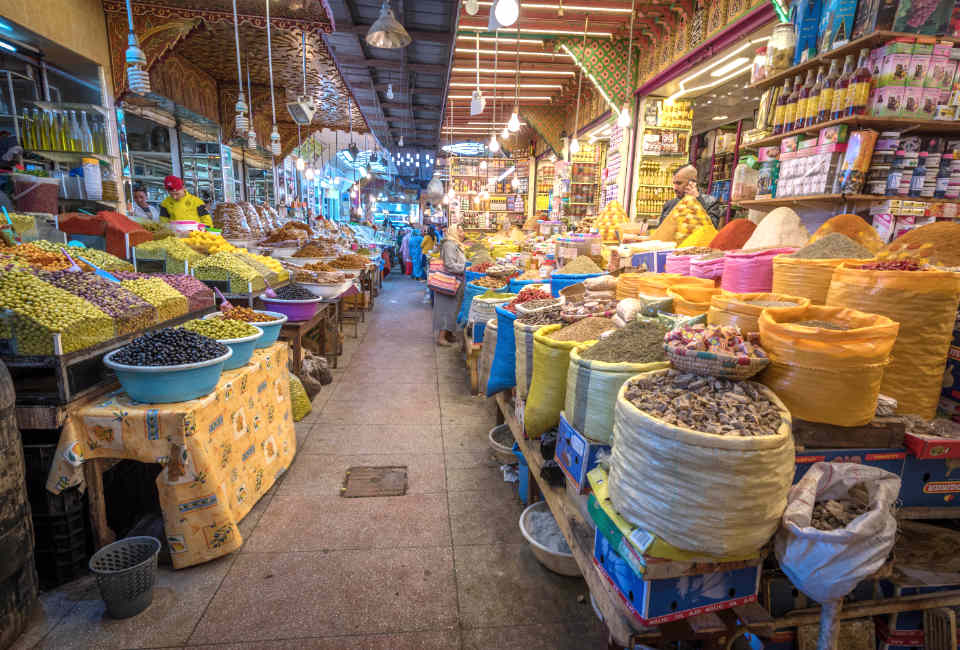 The Souk of Meknes offers spices, dried fruits, incredibly fresh meat and all kinds of junk. But most of all… it makes all of your senses work in overdrive!

2. Sahrij Swani or the Norias Basin

To reach the Norias Bassin, you need to walk a little bit from the medina of Meknes, but if you want to escape the hustle and bustle of this city, it’s well worth it!
Just next to the royal stables you’ll see a giant water basin. Unfortunately, swimming or other water sports can not be enjoyed here. But that might actually be a good thing. The peaceful and quiet vibe that hangs here should not be disrupted!

The Sahrij Swani attracts mostly locals, who come here to relax with their families. Children walk and cycle until they are exhausted and then get treated to some yummy popcorn, while the elderly wait on the benches, hiding themselves from the hot temperatures. 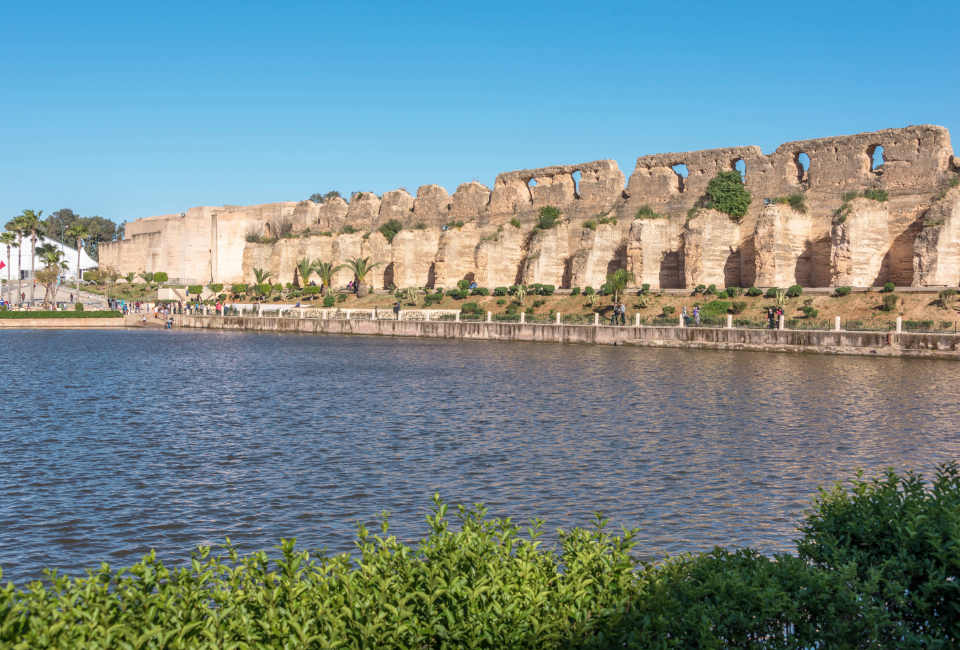 The Sahrij Swani or the Norias Basin is very popular among locals who are in search of a little piece and quiet.

3. Bab Mansour and other entrance gates

From the central El Hedim square, there is no way that you can miss the Bab Mansour. This gigantic gateway is beautifully decorated in the most beautiful Islamic architecture.
The other gates that you find in Meknes are surprisingly sober compared to the Bab Mansour, but this used to be the central gateway to the walled city, so I guess they stepped up their game especially for this one! 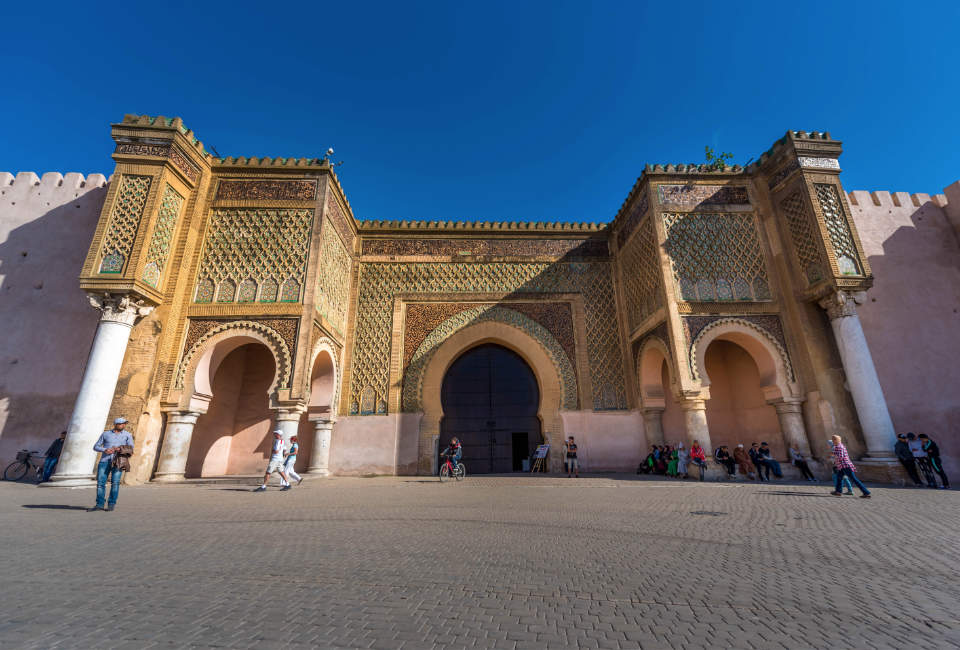 The Bab Mansour is considered to be one of North-Africa’s most beautiful city gates!

A visit to Meknes is not complete if you’re not visiting the mythical Volubilis and the beautiful Moulay Idriss.
At about half an hour from Meknes you can head to Volubilis and Moulay Idriss. You can take this trip from Fes and Meknes, but Meknes is the better of the two since it’s located a lot closer. The best way to arrange this trip is by haggling with the owner of a grand taxi (the older Mercedes cars). We paid 300 dirham (+/- €30 – $35) to drive back and forth. In total there can be seated up to six people in the grand taxi.
The taxi driver gives you ample time to discover both sights and then waits for you to drive back along the beautiful route to Meknes.

Volubilis was a settlement of Roman origin and nowadays this archaeological site is still very well preserved. This place was the administrative center for all matters that had to be settled in the North of Africa by the Romans.
From here a lot of wild animals were shipped to Europe to serve as amusement in the Circus Maximus.
Now, all that remains are some beautiful triumphal arches, columns and other remnants. Those who want to discover more about Volubilis can visit the museum.

Moulay Idriss is, in my opinion, even more beautiful than Meknes. This small village was founded long ago by the Berbers. You can see the typical blueish green color in which they have painted the walls of this settlement.
Stroll through the maze of small streets and alleys until you reach the beautiful viewpoint above Moulay Idriss. On the way you will find fellow residents and their donkeys, but also a lot of beautiful minarets and mosques.
You can’t find your way back down? Then ask for help to one of the “helpful” residents. For 30 to 50 dirham, they show you the way back without hesitation. 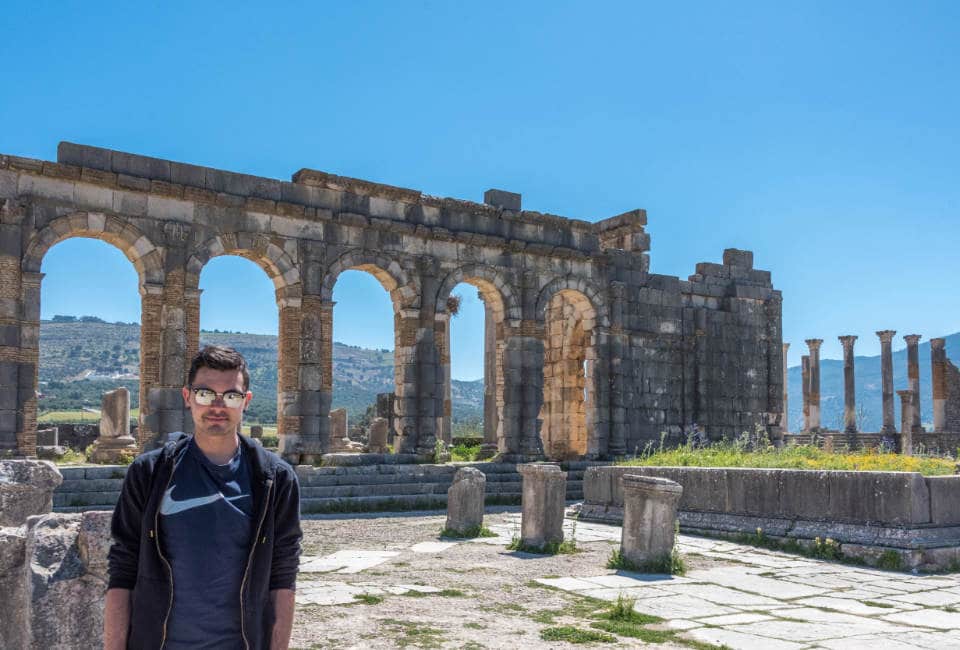 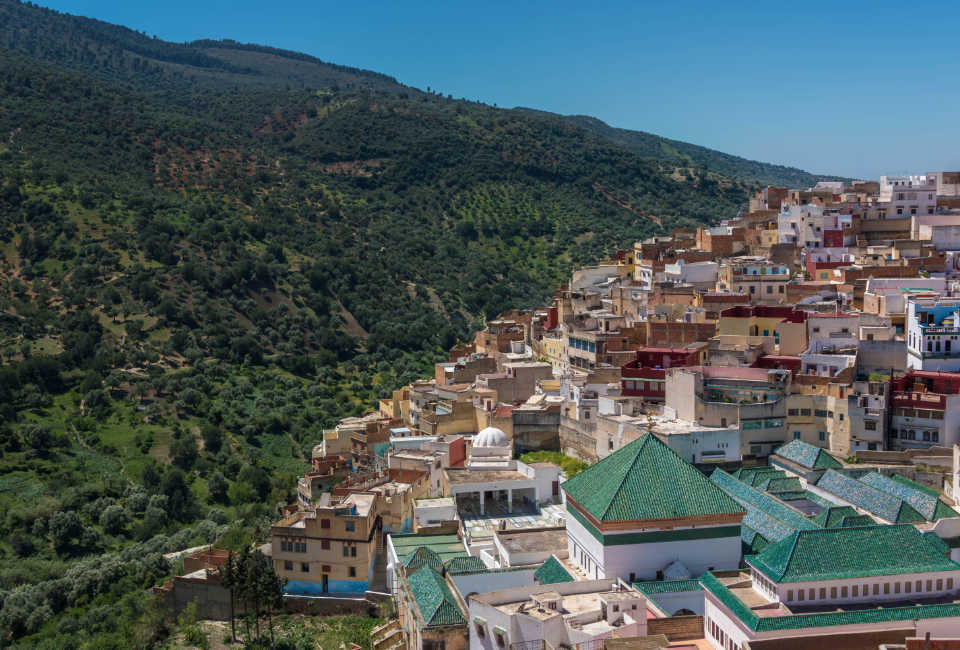 Moulay Idriss is a gem! If I’m honest, I even liked it more than Meknes!

Once you entered the city gates of Meknes, the Prison de Kara may not immediately become visible. But this is in fact completely normal.
This giant prison is located completely underground. The only thing that suggests that there is something going on in the depths of the earth, are the many light holes that were made on the upper square.
Sultan Moulay Ismail ruled with an iron fist! Everyone who opposed his ideas, and especially the Christians, Portuguese and Spaniards, were locked up in this cool and dark underground prison without any hesitation. 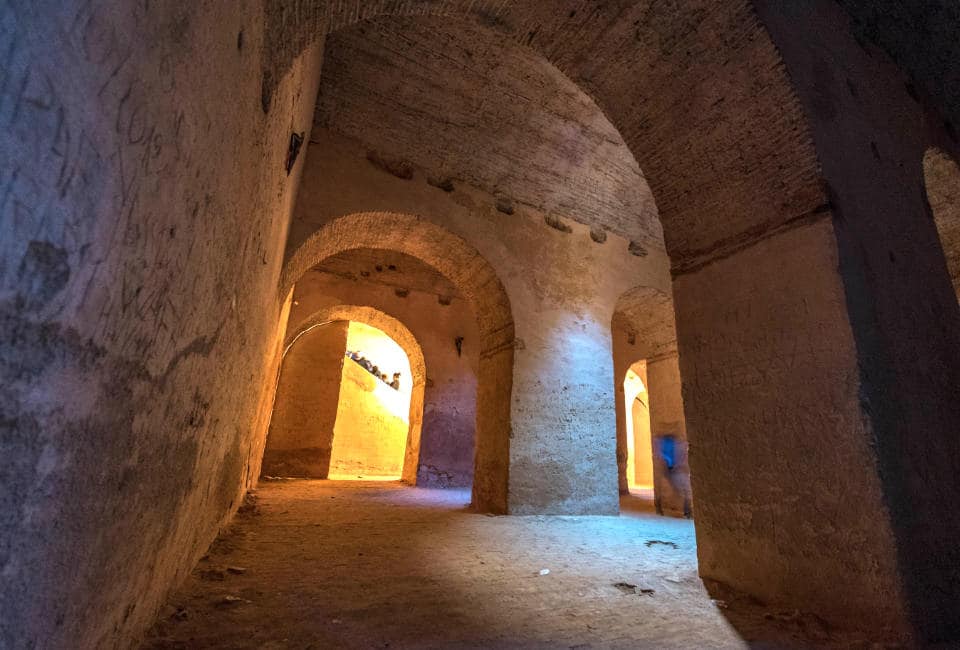 The prison of Kara is a giant underground maze. Don’t get scared! Visitors can now enter and leave as they please!

Extra: The mausoleum of Moulay Ismail

During my trip through Morocco in 2017, the Mausoleum of Moulay Ismail was being renovated and thus I couldn’t visit this stately palace.
However, according to many, the Mausoleum is the most beautiful sight of Meknes, and so I feel obliged to also mention this building.

The mausloleum of Moulay Ismail is one of the few religious buildings in Morocco that is also accessible to non-Muslims. Besides the beautiful interior, you’ll also find the tombs of sultan Moulay Ismail. A sultan that saved Meknes out of the hands of the combative Romans. 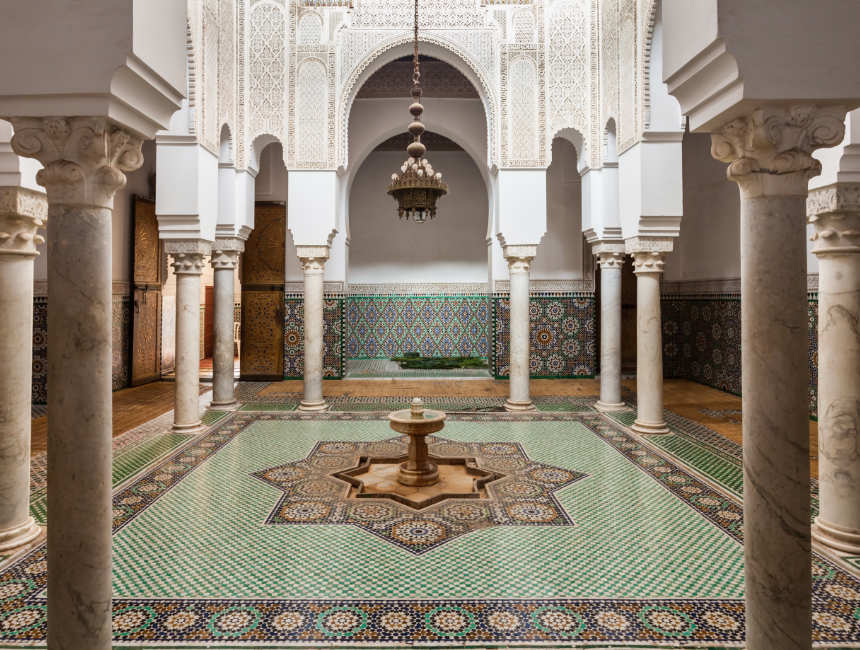 The interior of the Mausoleum of Moulay Idriss looks stunning, doesn’t it?

Car hire in Morocco: bad idea or not?

Marrakech to Essaouira: all options + what to see + 5x hotels