The 'Catacombe dei Cappuccini' or the Capuchin catacombs of Palermo is probably one of the strangest things to do in Palermo. Strange, macabre and, according to some, even lugubrious sight. You don't see a collection of several hundred bodies suspended from a wall every day, of course!
Expect a lot of mumified bodies, bones and skulls, but above all: a very unique experience!

Are you looking for tours and excursions in Palermo?

Once you have taken the stairs to the deepest part of the church, you end up in a dark world full of stuffed corpses. One is better preserved than the other.
Each of the mummies of Palermo has its own facial expression, and that makes this cemetery a lot creepier. On the best-preserved bodies you can even see hair and teeth!
Be sure to also peek at the objects they carry, and the location of the zombies. The coffins, and clothing tell a lot about the social class and time period when these mummies were still alive. 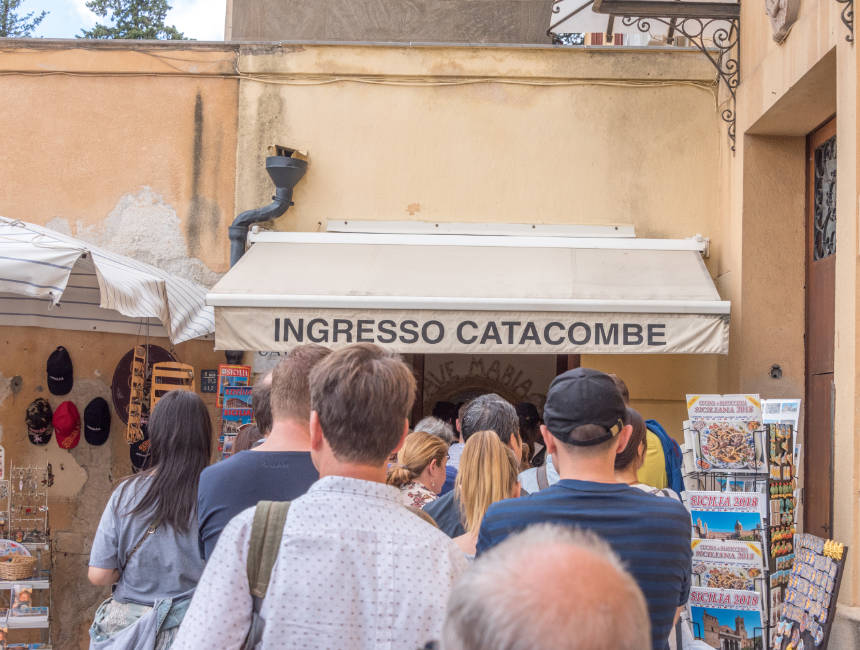 The entrance to the catacombs. It can be very busy at times, because let’s be honest… Who doesn’t want to see such a unique tourist attraction?!

A little bit of history…

As with the Catacombs of Paris, the abbey of the Capuchins had not enough place in the sixteenth century to bury any more people in the adjoining cemetery. Because of the enormous population increase and all the diseases that this caused, this became a real problem.
To solve this dilemma, a crypt was created under the church in which deceased monks were put to rest. As many years passed, a spot between the mummies of Palermo became increasingly popular.

This popularity was of course also noticed by the ordinary mortal. A few decades after the creation of the crypts, non-clergymen were allowed to be placed in this macabre storehouse as well.
The last monk was buried in the Capuchin Catacombs of Palermo in 1871. The last non-clergymen that was added to the collection dates from 1920. 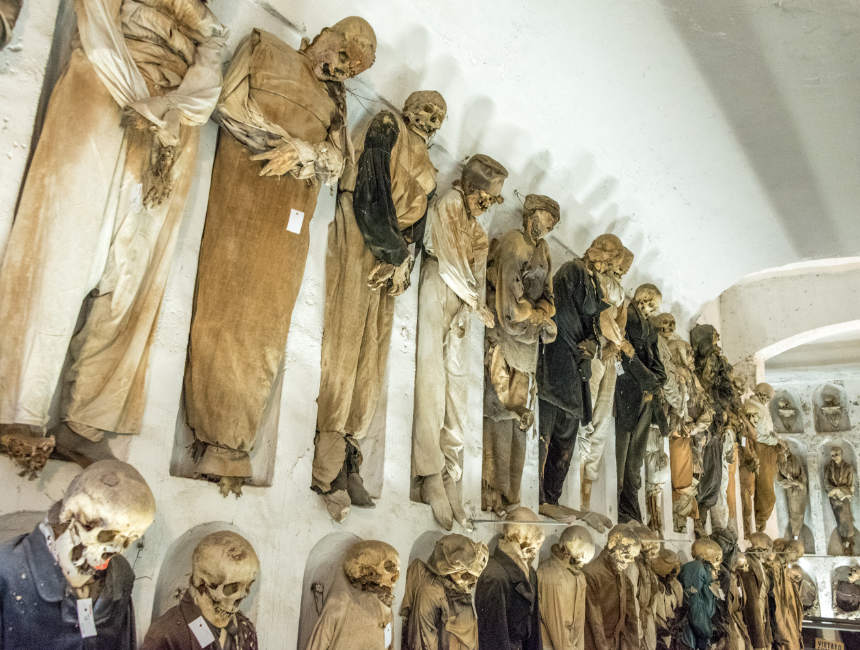 Corridor after corridor you see dozens of mummies! This really is something unique!

To stop the decomposition of the bodies -or at least slow it down- every body was completely dehydrated. This was done by laying the bodies on hot, ceramic pans and then patiently waiting until all the moisture had dripped out of the body. This lengthy process took about eight months. Afterwards they were often washed with vinegar, and sometimes embalmed or placed in glass cabins. Although no new bodies are added anymore, you can still look at the place where this was once done. And if you look closely you can still see some very dehydrated cadavers!

Because a lot of different techniques were used, you may notice that certain bodies look a bit ‘fresher’ than some of their fellow roommates. You can’t see the skin of most mummies anymore, but with a small number you can still detect hairs! A moisturizer would be a luxury for many!

Both the Capuchins and the non-spiritual mortals wear clothes in most cases. Rich families were even allowed to replace the clothes of their deceased ancestors on a regular basis. Fashion-conscious mummies? Why not! 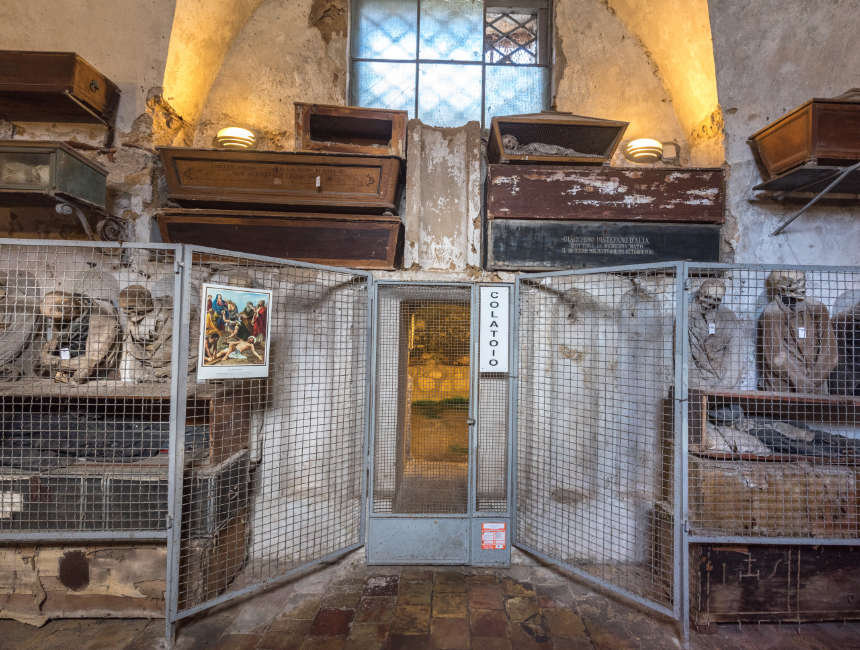 In this space the corpses were completely dried out until all the bad smells were gone, and the bodies didn’t rot any further.

In total you’ll find more than 8000 bodies in this strange warehouse! At the front you’ll find the clergy. Hallways full of praying skeletons in their original clothing.
These mummies of Palermo are best visible, because they aren’t covered with a fence like many of the others.

Elsewhere you’ll also find corridors full of men and women, one in a more strange position than the other. These cadavers are shielded from the public with bars because a lot of fingers and other small bones were taken away by tourists because they wanted some souvenirs…

A certain part of the walls was also reserved for virgins and “bambinis” or children.
These little children’s bodies, decorated in mini-clothes, are in my opinion the strangest part of this collection.

In addition to an aisle for men, women and children, there are also rows of priests, monks and professionals.
Don’t think of the latter as craftsmen, because only the rich people could afford a spot in this crypt! The mortal remains in this aisle are from lawyers, writers, doctors and high-ranking soldiers. 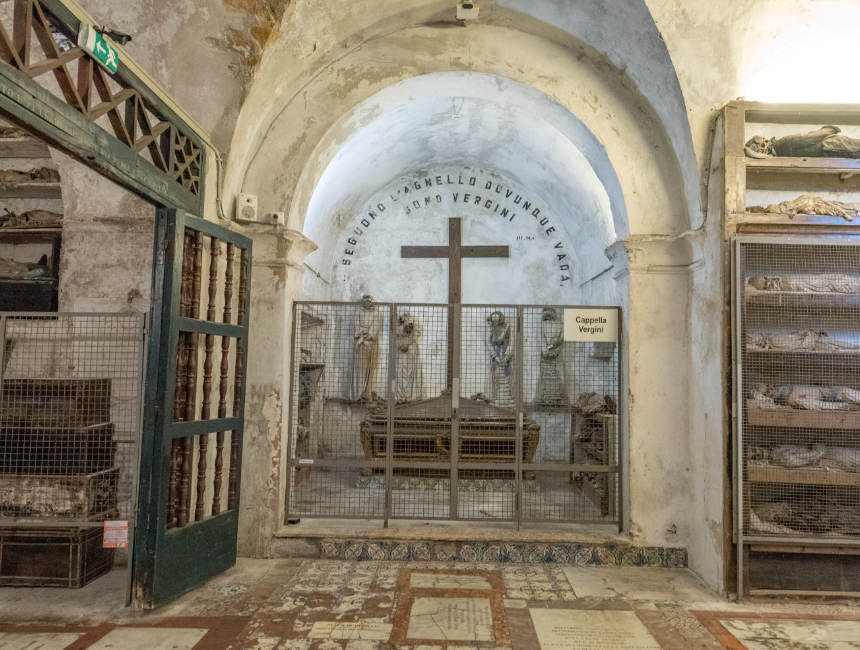 The ‘Cappella Vergini’, or the chapel of the virgins. These pious ladies got a very special place! 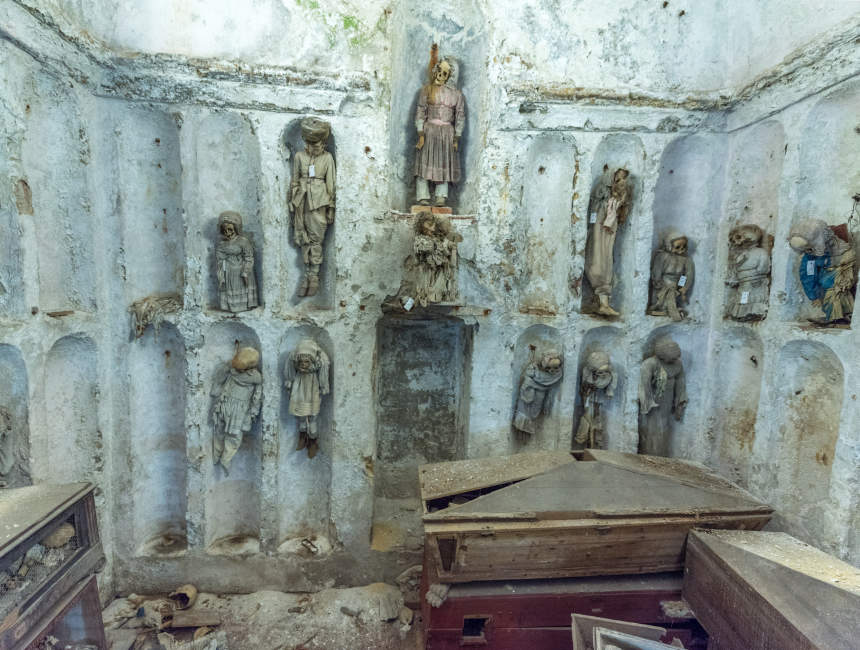 An admission ticket to the Capuchin catacombs of Palermo costs three euros per person. At the entrance you can also buy a booklet with some extra information. Do you want to visit the catacombs with a guide? Then you must book your visit via an excursion.
The catacombs are a bit remote and not immediately located in the center of the city. From the Palazzo dei Normanni it’s about a fifteen minute walk to the Piazza Cappuccini, 1, 90129 Palermo.
The catacombs are open every day from 09:00 AM to 6:00 PM, but don’t forget that there is a siesta between 1:00 PM and 3:00 PM. 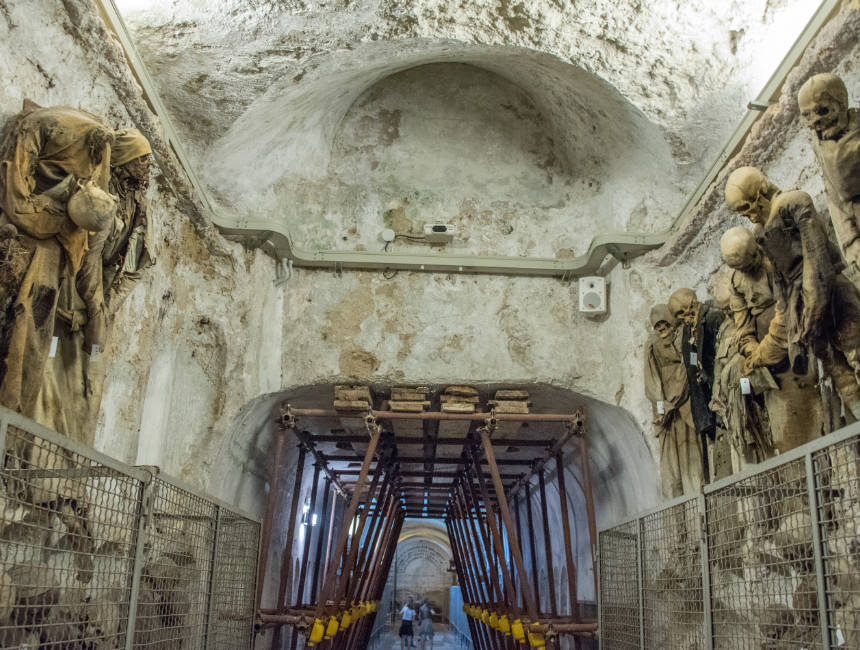 The capuchin crypt of Palermo has a whole convoy of cadavers ready to welcome you! 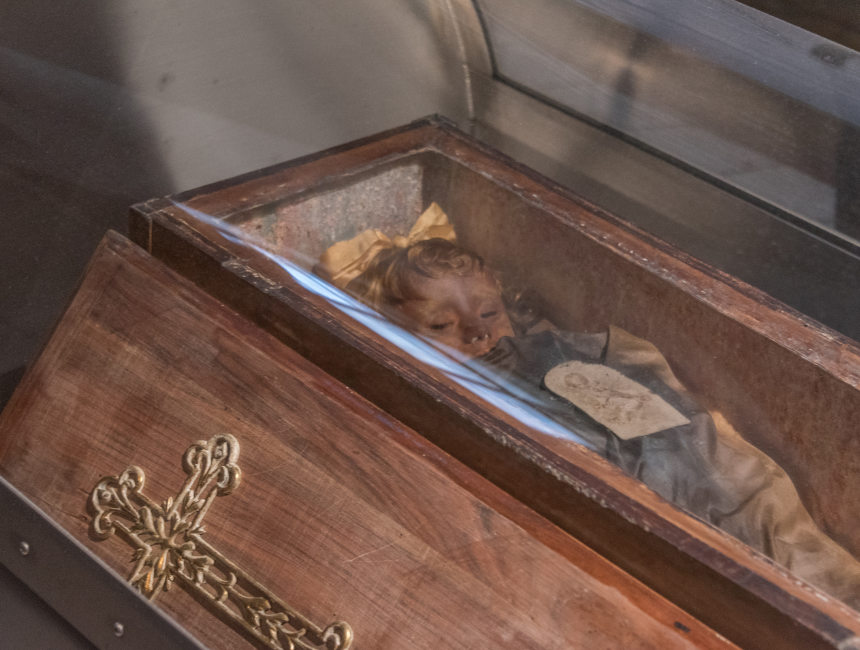 The little Rosalia Lombardo has been preserved with very modern techniques, so she still looks quite good. 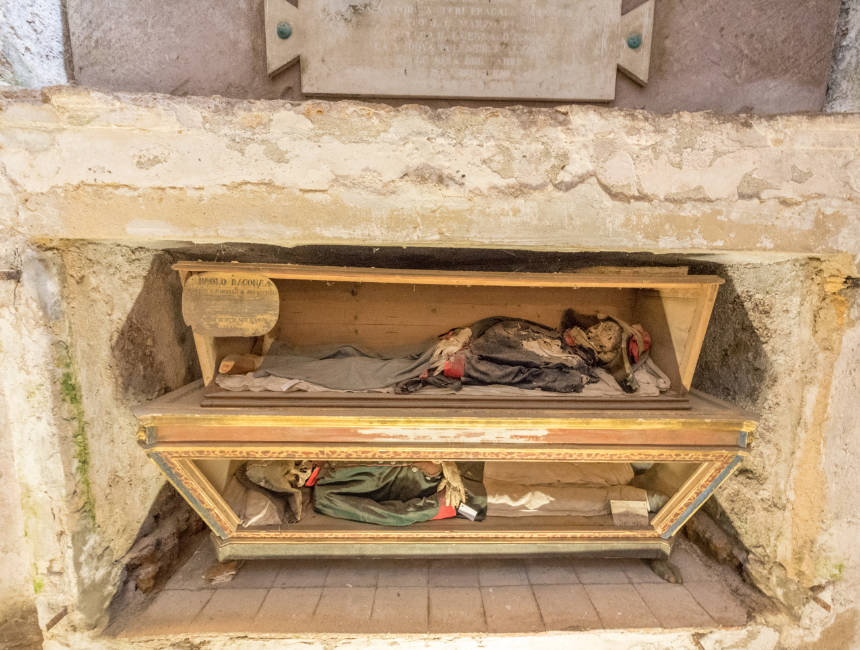 Colonel Enea DiGuiliano and his companion!

Alternatives for the catacombs

The Catacombs of the Capuchins in Palermo are macabre, but there are many more of these creepy places to visit in the world! 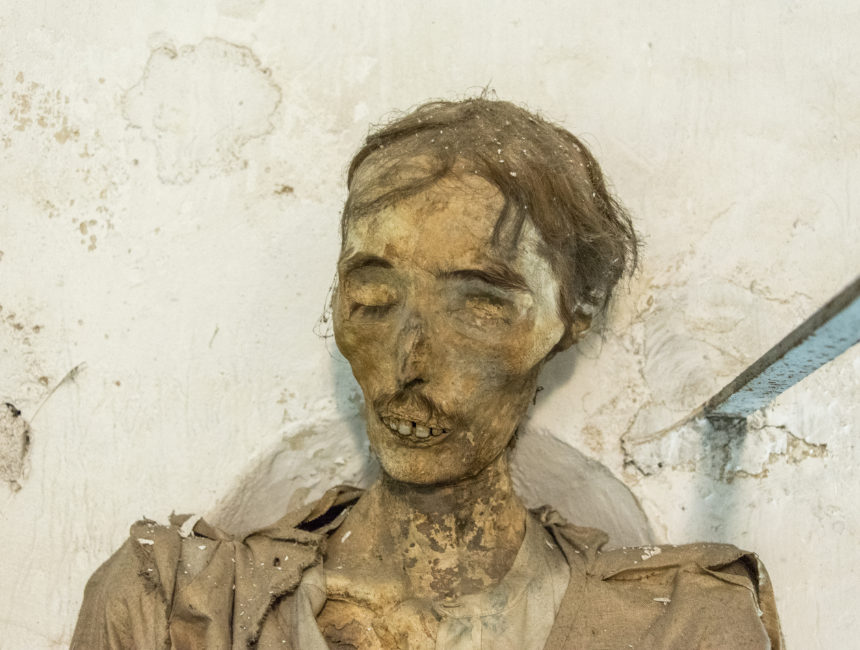 These bodies in Palermo remind me of mummies, don’t you think?

Guided tours and other excursions in Palermo

Would you like to be shown around these creepy catacombs? Or are you still looking for other trips to fill your days in Palermo?

» All tours and excursions in Palermo

Tip: Arrange your tours or tickets in advance and avoid queues or sold out excursions. You can order tickets online from these recognized tour operators.

» All tours in Palermo

» All hotels in Palermo.