After I had rissen from the salty underground world, I decided to end my last day by just relaxing and not doing anything special anymore… Or well… That was the original plan! Because it was friday night, there were a lot of new backpackers (read: party animals) who had arrived in the hostel. A couple of Polish guys were very ready to party and I of course couldn’t say no when they invited me over to pre-drink with them and then go completely wild at a Kraków party. Two bottles of Vodka (dirt cheap and excellent quality! - no hangover!) and some other drinks later we partied the night away. My intention to get back to the hostel at two or three in the morning of course didn’t make it and only at seven I returned to my bed once again. 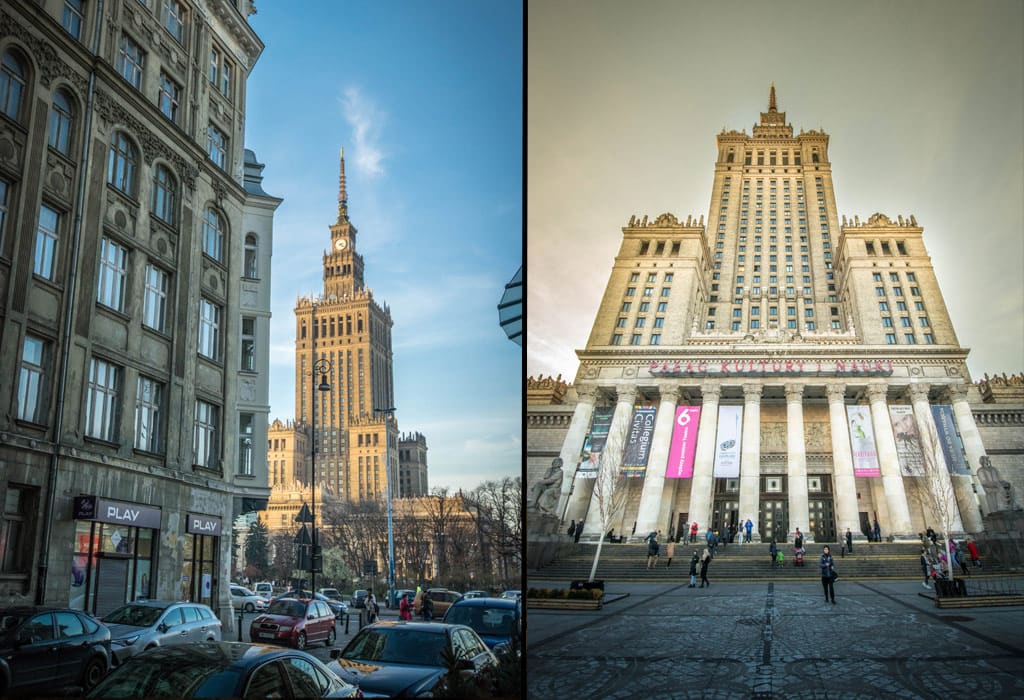 The museum of science and culture is one of the most prominent buildings in Warsaw. It was once given to Poland by Stalin.

I slept for only one hour, but surprisingly I didn’t feel sick or bad at all! I didn’t complain either, because -if I’m honest- this was one of the best times I had while partying abroad! Krakow, you are an amazing city! But now it’s time to get on to my next destination: the capital of the Polish nation: Warsow!

With a comfortable train it took me a little over two hours to get there. If the view from the train was nice, I couldn’t tell, because my eyes were closed shut for the complete train ride so that I at least had a little bit of sleep before I explored Warsawa.

The train ride was 42 Polish zloti. About ten euro or eleven dollars.

It seems like something Polish, because it was exactly the same in Krakow: the central train station is incredibly big! Besides the train tracks and a big bus station there is also e huge mall connected to it. If you don’t want to spend money you better keep moving!

When I finally found the right direction, I resurfaced and I could immediately see the most famous building of Warsaw: the palace of culture and science. This tall building was built when Poland was still governed by communist leaders en this communist architecture is clearly visible!

Stalin decided to give Poland a little gift and they could choose between two possibilities: a monumental building or an underground metro system.

The Polish people seemed to be a little vain and chose to give their bombed city a new start by adding this building to their skyline. The Josef Stalin palace.

The hostel wasn’t particularly close, but it’s good that you don’t sweat with these icy temperatures! After walking for about fifteen minutes, I ringed the bell of the Chillout hostel in Warsaw.
Three storeys high –if you didn’t sleep, walking steps are absolutely killing your legs!- and I could finally throw off my way too heavy backpack.

I looked around and immediately noticed that this was a great and cosy hostel. The communal room looked incredibly comfortable, was decorated very modern, had amazingly soft sofa’s and a super clean kitchen with everything needed to cook whatever you wanted.

For less than ten euro’s a night I didn’t understand how they could keep a place like this, but hey… I was definitely happy!

The rooms were a little less modern, but as long as the beds are comfy I don’t mind that much. In this room you only need to close your eyes anyway! 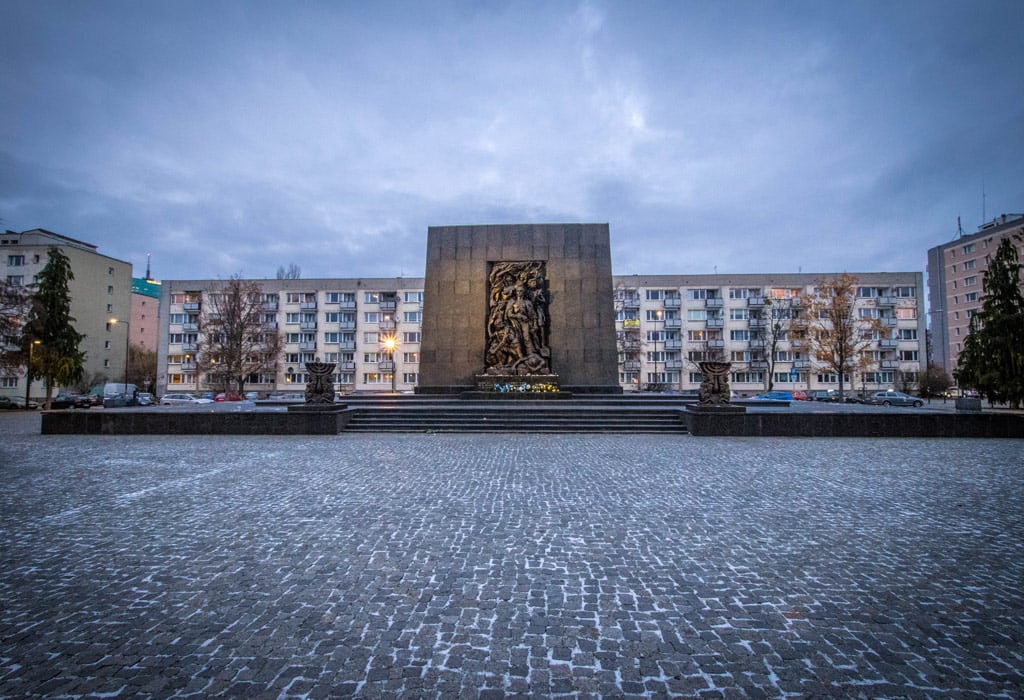 The monument for the heroes of the Warsaw ghetto. Right in front of the POLIN museum.

What to do in Warsaw?

My last evening in Krakow –even before I had slightly intoxicated myself- I did a little bit of research already, for I wanted to start sightseeing right away once I got to Warsaw.
I had already seen the palace of science and culture from afar, but of course I needed to inspect it from a little closer as well.

In this Stalinistic building there is -of course- a museum that you can visit. On top of that, you’ll get an amazing 360° lookout if you buy a ticket to the viewpoint on the top floor. It’s always fun to see a city from above!

You won’t find that many beautiful, historical and cultural buildings in Warsaw. That’s mainly because the city was completely destroyed by the Germans because of their actions during the uprising of Warsaw.

Museums and memorials, on the other hand, you’ll see everywhere! You can almost say that there is one on every corner of the street.

There is also one spot where you can see a small remainder of the wall that was built around the Jewish ghetto (Zlota 60).

To visit all museums I didn’t have the time (and honestly, I also didn’t want to) but the palace of science and culture, the copernicus science museum, the Chopin museum (Frederyka Chopina), the POLIN (Jewish museum of Warsaw), the Gestapo headquarters, the NEON museum (Cool! A museum about neon lights!), Warsaw uprising and the PRL museum are definitely worth a visit.

I visited the Chopin museum, the PRL museum (a tiny museum where you see how communist households functioned and decorated their homes in the PRL -Polish communist republic-) and the Warsaw uprising museum. 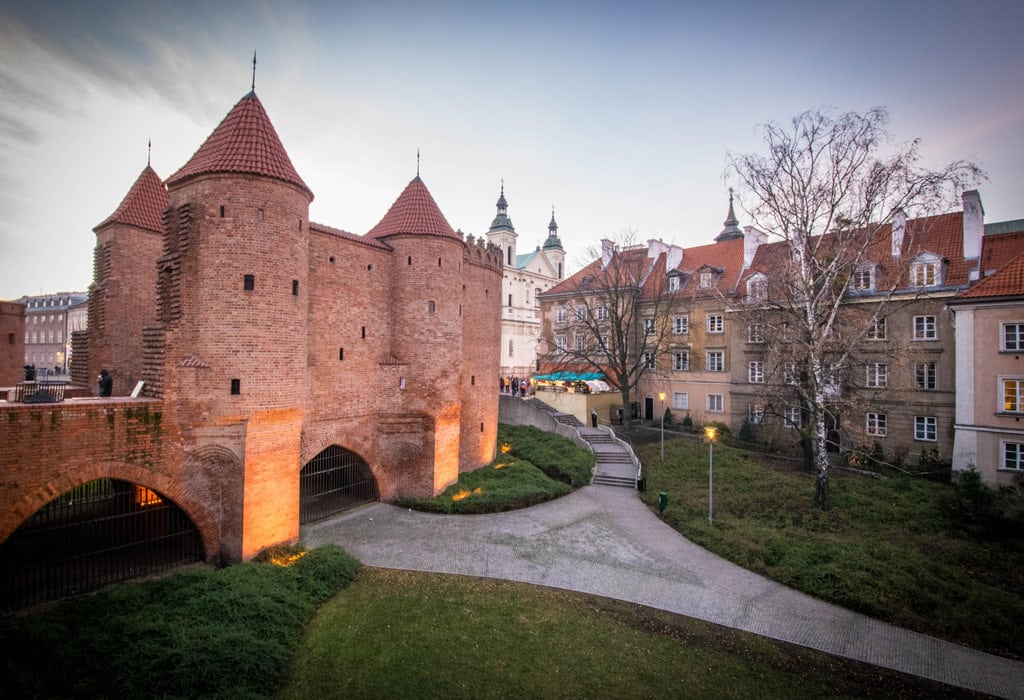 Barbakan Warszawski or the former entrance gate to the city of Warsaw.

Building or remnants from before world war two are scarce in Warsaw. Even the old city center (Stare Miasto) isn’t as old as it appears to be!

Because the Germans completely destroyed the city, they also bombed the old city until nothing was left.

Luckily, there were a lot of paintings that showed the grandeur of the cute little city center. This and the memories of the survivors made sure that only few years later the city could be rebuilt to its former glory. Or well, almost I guess.

The majestic buildings have gorgeous facades in light colours, often decorated with beautiful drawings and extra’s. The roofing changes from hanseatic houses to bulbous, copper or tin roofs.

The whole city seems to flow over into each other beautifully and because it’s almost christmas, the many christmas markets and the giant christmas tree of course add to the amazing atmosphere in the city!

Definitely try to visit the observation terrace of the St. Anne church. For only 5 zloti you can climb up a turning and twitching staircase and eventually you’ll get a phenomenal viewpoint over the old city.

Once you returned back down, you are allowed to treat yourself on some Polish delicacies from the nearby market at the square next to the church. I personally really liked the almond cookies and the nut pies the most. Of course you can also always decide to heat yourself up with some glühwein!

If you keep walking through Stare Miasto, you’ll be at the central square in no time. Take note of the detailed additions to the buildings. I think this place must be amazing during summer!

Keep on walking and you’ll see the Barbakan Warszawski within minutes. The former (fake) city wall of Warsaw. 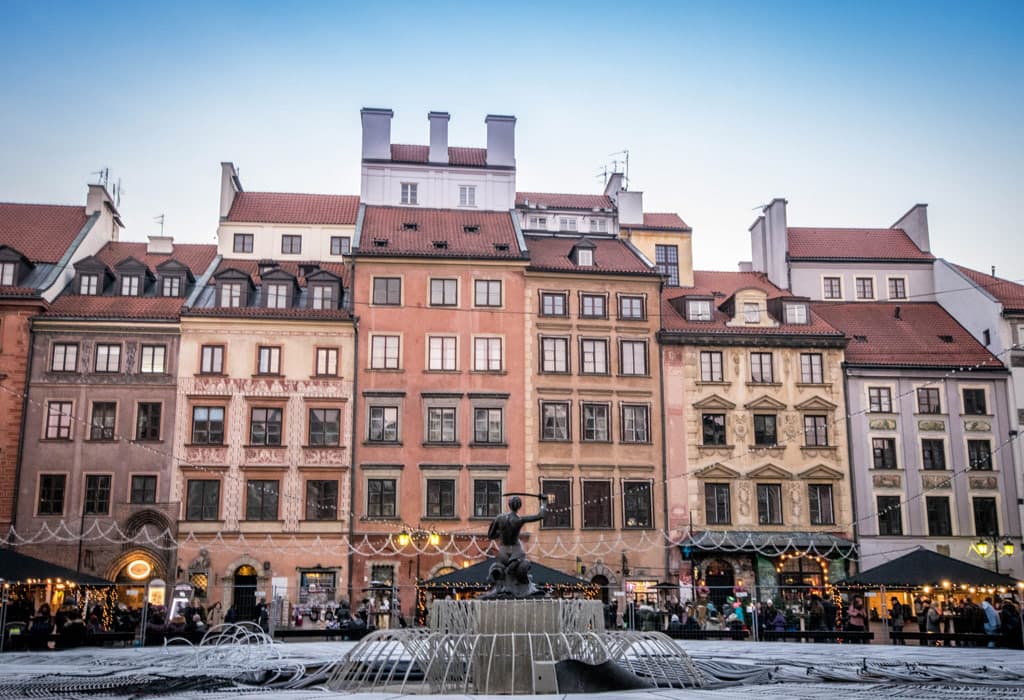 The central square within the Stare Miasto. Look at the gorgeous facades of the houses! 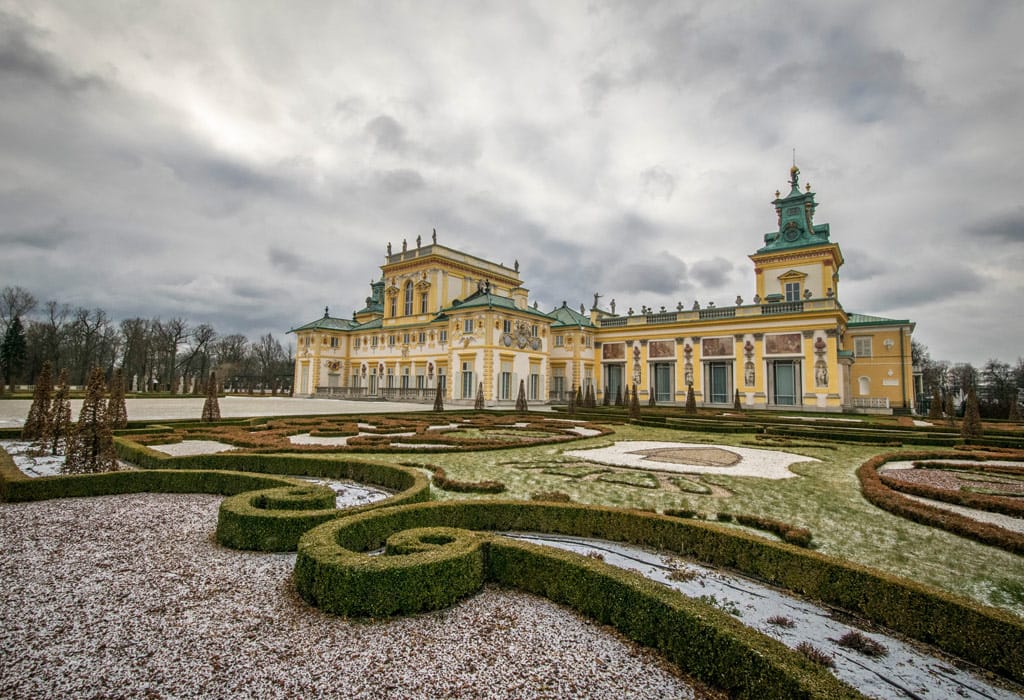 The gardens of the Wilanow Palace. Perfectly manicured and well worth a visit!

A citytrip to Warsaw during winter is fun, but it soon gets dark and museums close early (most of them already shut their doors at 4 pm!) and so it is definitely nice to stay indoors as well.

Because the Wilanow palace lies about twenty kilometers from the capital of Poland, I decided to keep this for my next day of sightseeing. For the gorgeous castle you need enough time to visit it. Definitely no rush!

With my trusted friend, Google Maps, I knew on which bus I had to hop on and for only 3,80 zloti I arrived about fifty minutes later. If you don’t like the public transport that much, you can always use the Uber app for your smartphone. When starting at the Museum of culture and science, a ride to Wilanow would cost between 25 and 30 zloti.

I was in luck, because today I didn’t need to pay to enter the museum and its exhibitions. With my camera ready I already shot quite some pictures of the gorgeous facade outside. Once you get inside, you get to see a lot of different, classical rooms.

In these rooms you can see a lot of antiquities and items that describe the history of the palace. The dozens of rooms are beautifully decorated and you’ll soon get a feeling of being home! As if you can be a king or queen just for a little while…

You can easily spend a couple of hours in this palace, but to read every letter of information wasn’t necessary for me and thus I could leave after about an hour.
Once I got back outside, I also payed a visit to the royal gardens (5 zloti) where I could see the perfectly manicured hedges and gras patches completely snowed under already. 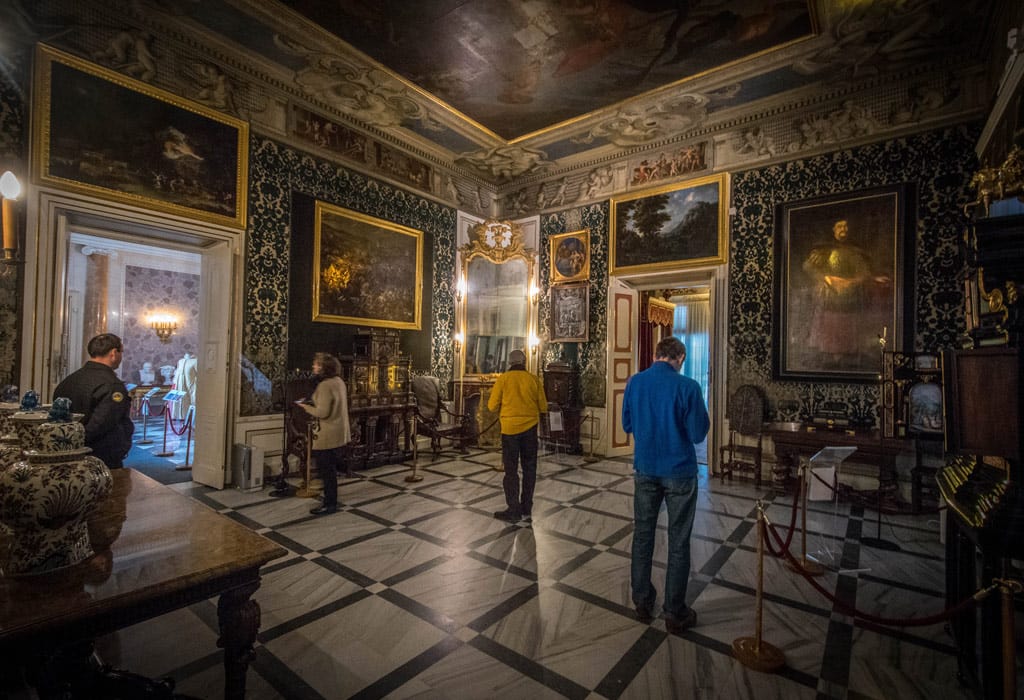 The museum of Wilanow is nice to visit, and besides the exhibits, the rooms are also quite beautiful.

There is a lot to see in Krakow, and investing in the public transportation is definitely a good idea. If you’ve ever been to Berlin you’ll notice quite some similarities between the cities. Because both cities were completely bombed, they know are very modern, and in modern cities there doesn’t seem to be thought of walking or cycling people all that much.

It’s already time to leave Poland and head to the Baltic regions!

Poland, it was very nice to get to know you! We’ll definitely meet again!

The 10 best places to visit in Krakow

Visit Poland in one week

Getting from Krakow to the salt mines of Wieliczka + what to do and see?