The Colosseum or Coliseum of Rome is one of the modern wonders of the world that everyone should visit at least once in their life. Actually, the official name of this beautiful building is the Flavian amphitheater, because it was built in the year 72 by the Flavian emperors. This gigantic theater was completed in only eight years. This building is still standing after more than two thousand years. Even after earthquakes, fires, lootings and wars. No wonder that the Colosseum is considered a wonder of the world!

Don't wait in line for hours!

A visit to the Coliseum can’t be missed during your city trip to Rome. This historic building is incredibly interesting, and I really recommend to book a guide right away. For five euros extra on top of your ticket, you’ll get information that will make your visit a lot more pleasant and interesting. All the information that you find in this article was also told to me by a guide. And this is only a small part of all that you get to hear!

After you have shuffled through the security and scanned your tickets, you can finally enter this mythical building.
After a few flights of stairs (there is also a lift for people who have difficulty walking, or people with strollers) you get a nice view over the Flavian amphitheater. You’ll probably immediately notice how big and deep this building is. 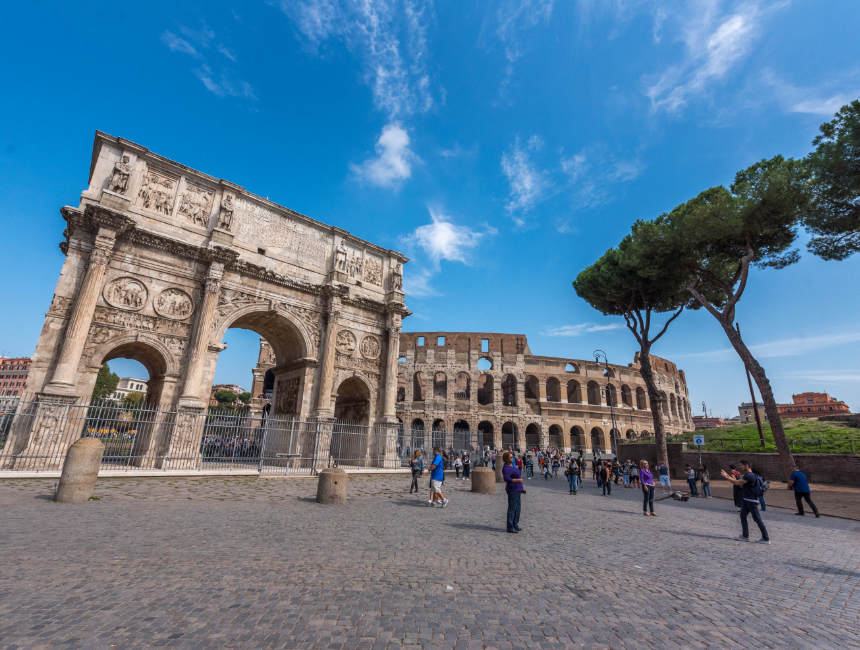 The Colosseum is one of the most visited attractions in Rome. Skip the long lines with the tips I give in this article.

The gladiatorial battles took place in the deepest part of the Colosseum. Here you can now see the semi-covered basements, in which the gladiators, murderous animals and slaves were pumped up and prepped to enter the battlefield. The gladiators, slaves and wild animals were pulled up from these dungeons with an ingenious system (a wooden cage lifted by slaves with the help of gears and pulleys).
Imagine how magical it must’ve been in those days: suddenly a cage appears, out of which men, women or starving animals appeared to battle for their lives.

The arena itself was completely sprinkled with sand, because sand absorbs all the blood and there wouldn’t be too much cleaning once the battles had ended.
These fights were one against one, and not dozens of gladiators fighting each other like in the movies.
Often the gladiators also had to battle against starving, wild animals. Usually these were lions, bears and other predators. But giraffes, zebras, hippos and elephants also regularly appeared on the battle scene. 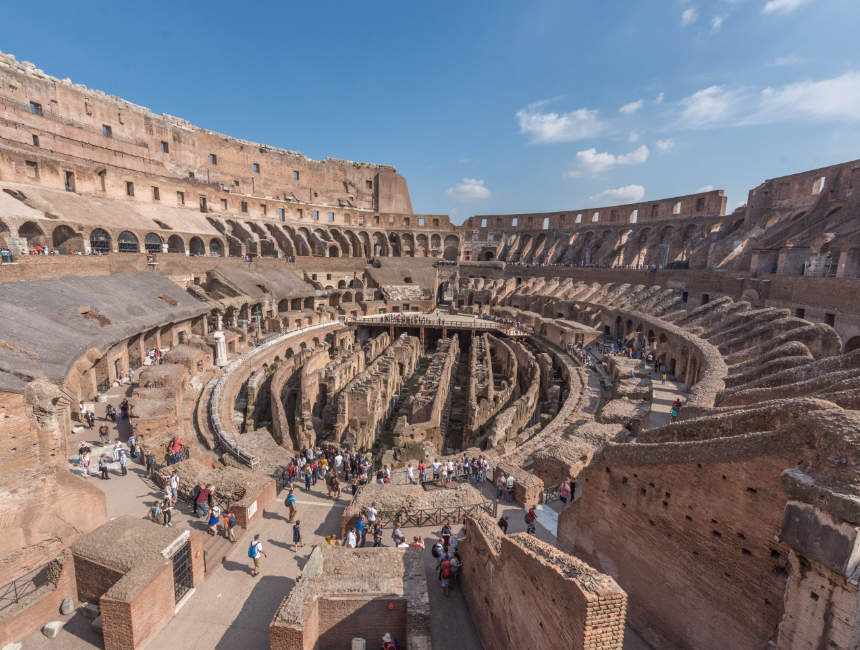 The arena, where the biggest part of all the spectacle took place several hundred years ago.

From the many seats it was decided whether the losing gladiator was killed or whether his life was spared. So it’s in fact a myth that the emperor raised his thumb to decide about the lofe of the warrior.
This was of course heavily manipulated! The owners of the gladiators had people in the amphitheater who incited the other visitors to save the gladiator’s life (usually). As a result, only very few of these soldiers were actually killed in the end.
Of course this was very different when they fought against animals… You can’t oblige beasts to make this choice, and so an injured gladiator was pretty much always killed by their furry friends… 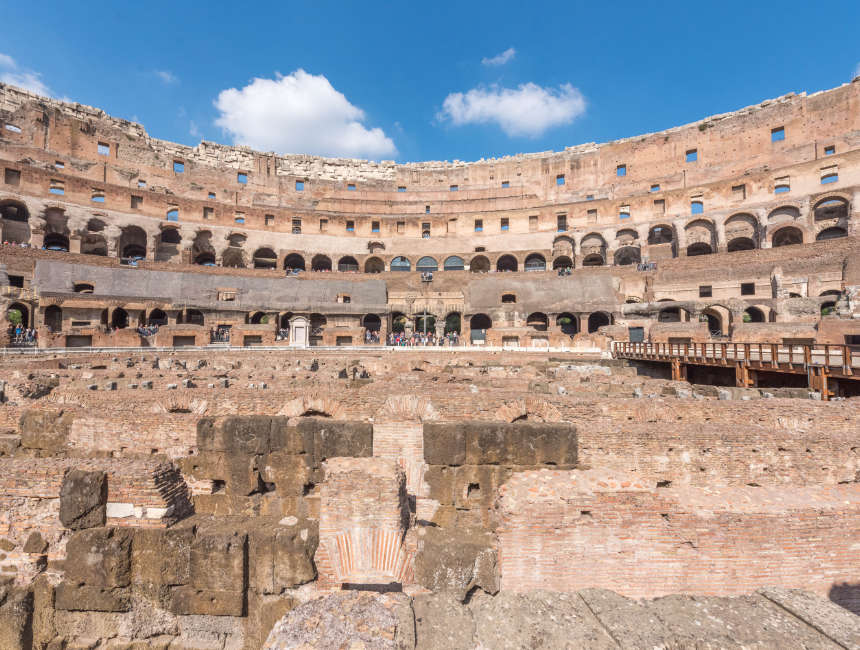 The Flavian Amphitheatre in Rome was the biggest one in its time. And even now it still speaks to the imagination!

The spectators closest to the arena were of course the richer families: the nobility. On the second floor, still close to the battlefield, you found the soldiers; the middle class.
A few seats higher you could find the poorer part of the population.
And the worst views were kept for slaves and… Women! 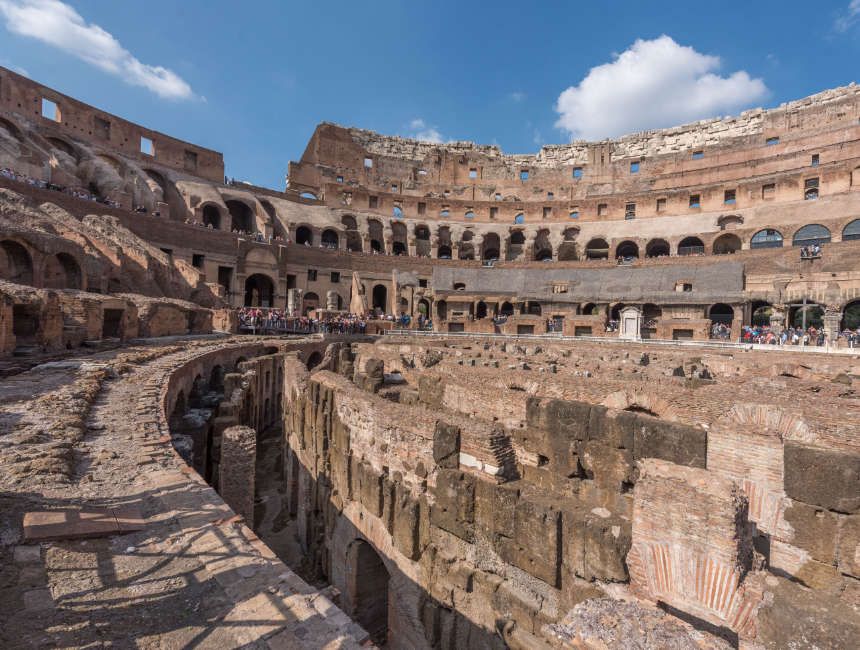 The nobility sat very close to the spectacle, while slaves and women could only sit in the spots furthest away from the arena.

The games in the Colosseum

The famous games in the Coliseum of Rome were held regularly. After all, it was important to keep your people happy during times of hunger and war! And there’s no better way to do that than to organize gruesome free fights, right?

The lucky citizens of Rome didn’t have to buy tickets for the Coliseum like we have to do now. The games were always free. They were completely paid by Rich Romans, mostly with political intentions. Often the games were performed for dozens of days in a row, until the fall of the Roman Empire.

When gladiatorial battles were announced, the entire population of Rome went crazy.
At that time, seeing a gladiator, would now be the equivalent of seeing a Hollywood star. So it was very much looked forward to!
People were also betting on the gladiators. As a result, the population could also see these warriors prepare for battle in a building right next to the Coliseum.
Once the gladiators were ready to start the real battles, they fought only three to five fights a year. Depending on their contract, they would remain in the service of their owner for four to five years and then become a free man. Slaves could never be released. 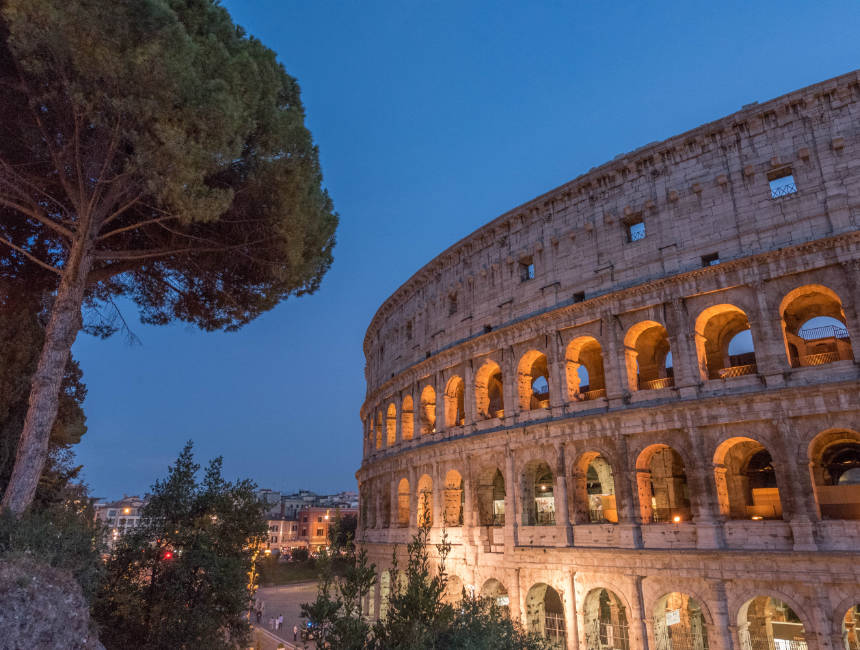 The Colosseum is beautiful from the inside and the outside, but it’s mostly the history from this building that makes it so interesting!

What happened to the Colosseum after the Roman Empire?

As we all know, the Roman empire didn’t last forever. And with the fall of the Roman empire, came the closure of the Flavian amphitheater.
The building fell into disuse, but was soon looted by many people. Valuable materials such as bronze, marble and all kinds of artifacts were stolen and often reused for all kinds of purposes.
When you visit the Colosseum, you may notice that there are a lot of holes in the walls. Here, metal constructions were used to reinforce the building. During several lootings, these parts of the theater were also stolen, and large parts of the building started collapsing because of that.

Only hundreds of years later, there came an end to all the looting. The Pope of that time declared the building as sacred.
From that moment on, this circular structure was mainly used as storage places and stables for horses.

Many centuries later, the Coliseum became a tourist attraction, and so Rome made sure that the amphitheater became safe and accessible for the many interested tourists to visit. Just a few years ago the entire exterior of the building was restored and cleaned up. This work alone had a hefty price tag of 25 million euros! 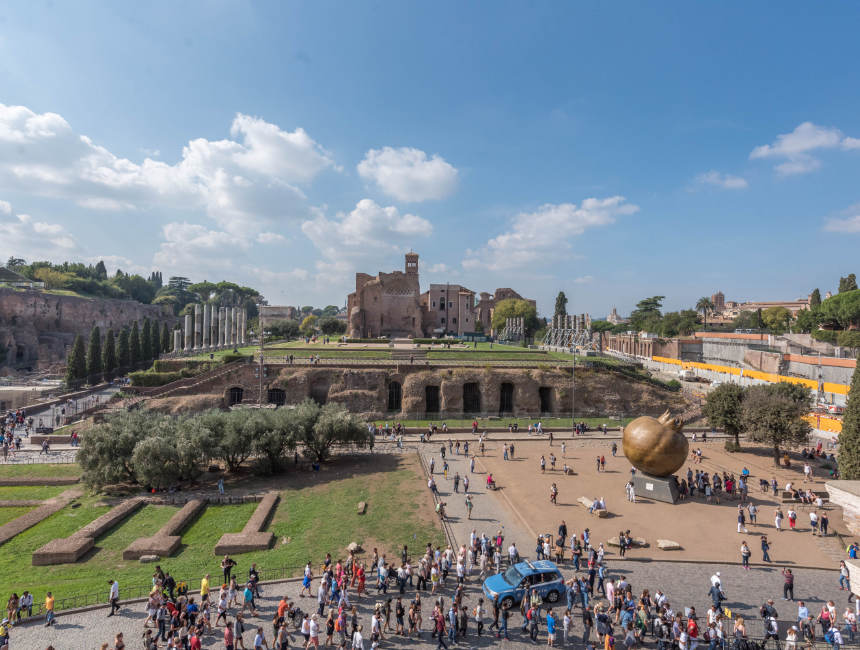 From such a high building, you of course also get a beautiful viewpoint over the rest of Rome.

Coliseum tickets: save time and money

The rows in front of the Colosseum are insanely long… Even in low season you can easily wait in line for an hour or even a few hours. To escape these long queues, you have four very easy and quick alternatives!

» All Coliseum tickets and tours

The Coliseum is open every day except for December 25, January 1 and May 1.
During the year the opening hours are somewhat different: 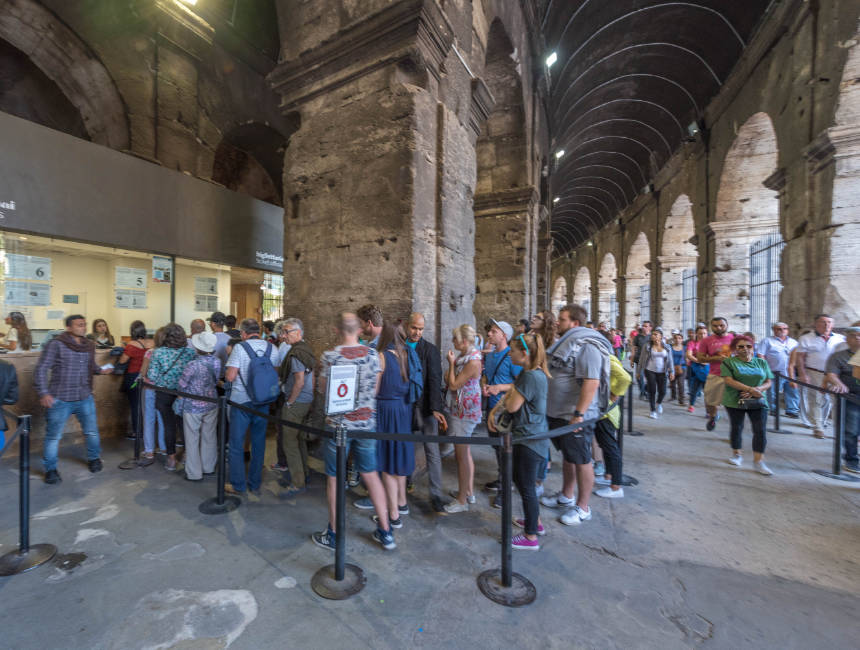 Buying tickets for the Coliseum can take several hours… But if you’re smart, you only need a few minutes! With the tips I mentioned above you should wait the absolute minimum.

Some fun facts about the Colosseum 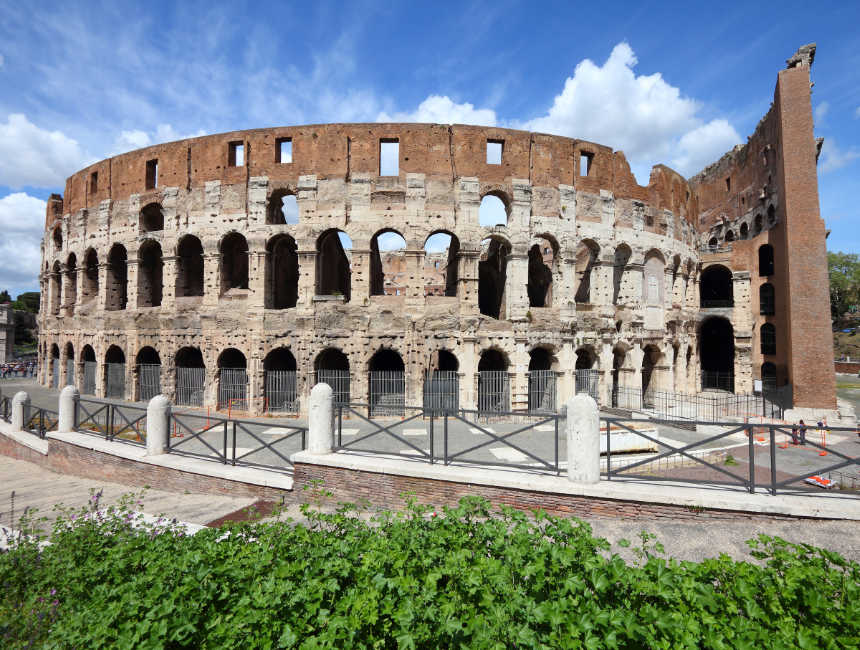 Walk around the Flavian Amphitheatre, because everywhere you look you’ll see something new and beautiful.

Do you want to skip the long queues of the Colosseum? Then buy your tickets online!