From the busiest city in Croatia, you can arrange a lot of fun day trips. One of them is an excursion to the magical Mostar. A city in Bosnia-Herzegovina that got a hard time during the civil war in Yugoslavia.
This city looks very Turkish and lies in the middle of a deep valley, which makes it very hot here. Fortunately, the fast flowing Neretva River provides the necessary cooling off and at the same time quite some spectacle! 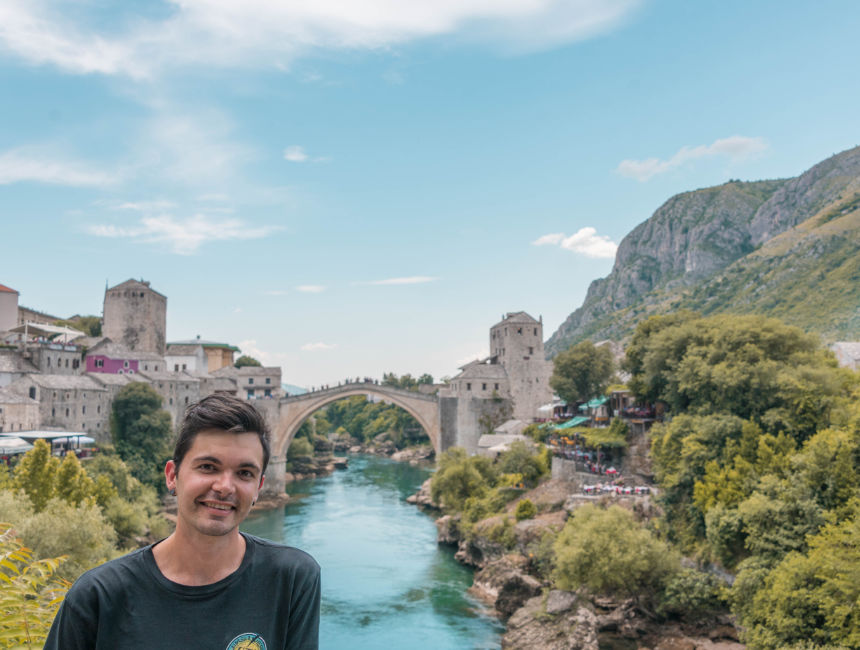 Chances are that you’ve heard about Mostar before. Or at least you must’ve seen pictures of the Bridge of Mostar. This stone giant was built by the Ottomans in 1566 and lasted until the Bosnian war. Unfortunately, this useless war also reached Mostar and besides the many unnecessary casualties, the historic bridge also got destroyed.
After the war, it was decided to divide the city into a Muslim part (east) and a Croatian part (west).

The old city that is so popular with many tourists today is actually the Muslim part. In 2004 Turkey paid for the reconstruction of the Stari Most (the old bridge) and with it, old traditions and customs also returned to the city. The narrow streets of Mostar are amazing to walk through!

How do you get in Mostar?

There are really only two ways to get from Dubrovnik to Mostar.
Either you rent your own car, or you book an excursion.

Renting your own car

Car hire in Croatia is not expensive. Via websites such as Sunnycars you can rent a (small) car for one day for just €30 and complete insurance is already included in that price!

Unfortunately, there are a lot of extra costs when you cross the border from Croatia to Bosnia-Herzegovina… Many car hire companies require you to purchase a ‘green paper’ if you want to cross this border. And that simple piece of paper costs between €100 and €150 extra…
Moreover, some car rental companies also require that you book additional insurance, which of course again costs more money.

Another reason not to cross the border with your rental car: the roads in Bosnia are often in a rather bad condition and the road markings are also a bit disappointing.
Don’t forget that data roaming in Bosnia-Herzegovina isn’t free (for both EU nationals as people living elsewhere). Navigating your way to Mostar with your mobile data will therefore cost you a lot of money. An average of €15 per MB…

Day trip from Dubrovnik to Mostar

The simplest way is of course when everything is arranged for you.
For €44 I was picked up from my hotel, accompanied by a very informative guide and we had more than enough time to explore Mostar. As the icing on the cake we also visited the beautiful Kravice waterfalls and the picturesque Pocitelj.
If you ask me, this (long) day trip is more than worth its money. By booking a day trip from Dubrovnik to Mostar, you are certain that everything is well organized and that you will not face any unexpected costs once you cross the border.

Things you must do in Mostar

The reason for organizing this day trip from Dubrovnik to Mostar is of course your visit to this picturesque town. When you enter the valley where Mostar is located, you notice very little of this historic spot. After all, it’s surrounded by a relatively new city. Once you come closer, however, there is no doubt about it: the cobbled paths and gray and sand colored buildings that stretch in front of you are indeed Mostar. It seems like you suddenly stranded in Turkey. The houses are very similar, but also the many mosques and minarets remind you of this country. If you’re going to have something to eat, you’ll also notice that the local cuisine is reminiscent of Turkey. Certainly try some local specialties: the food here is very tasty and cheap.
There are several sights in Mostar that you should definitely not skip. These were my favorites: 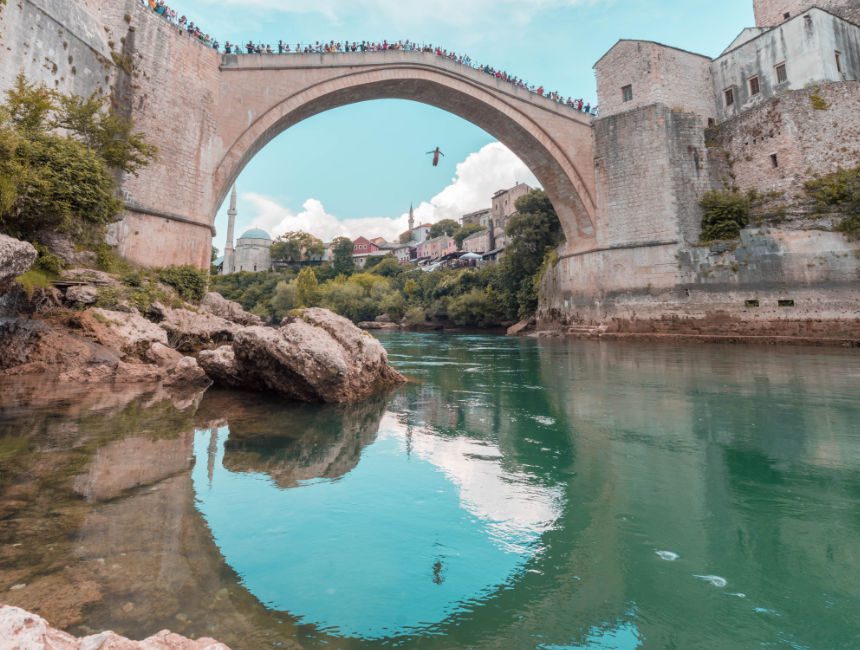 These daredevils jump in the ice-cold water from the bridge of Mostar!

My favorite sights in Mostar:

In the middle of the narrow streets, filled with (smooth) cobblestones, there are many market vendors with nice and dirt-cheap souvenirs, or nice restaurants where you can eat something or refresh yourself. This may perhaps not really be a sight, but I really liked the historic center.
Explore all the side streets, because you never know which hidden treasures you encounter! Also pay attention to the houses slightly further away from the village center. Very often you’ll get to see a souvenir of the war that once reigned here. Bullet holes or collapsed walls, for example.

The most famous monument of this city is of course the bridge of Mostar. This impressive piece of architecture was completely destroyed during the Yugoslav wars, but fortunately you can now find an almost perfect replica as if it never disappeared. From the bridge you get beautiful views over the Neretva river and the beautiful Mostar. But what is perhaps even more striking, are the half-naked men who fearlessly tip-toe around the edges of this high bridge.
They ask for a free contribution to all tourists and once they have collected a total of about €30 to €50, these thrill seekers jump gracefully (and without accidents) of this bridge.
The bridge of Mostar is very high and the river below is ice cold and flowing incredibly fast. Moreover, it’s very shallow in some parts, so … Don’t judge too quickly. This is definitely a life-threatening dive!
For the best view of these daredevils I advise to walk all the way down to the banks of the Neretva River. From on the bridge itself, you’ll notice that a lot of tourists watch the spectacle from there.
Does no-one jump? Then just enjoy the views over the fresh water. It really is quite relaxing to just sit here and check out the city.

Another attraction that you shouldn’t miss is the big mosque of Mostar.
If you walk over the bridge and turn left, you’ll see this mosque in no time. Go take a look inside, but make sure to also have a look around the back for a beautiful view over the bridge of Mostar and the Neretva river.
For the most beautiful panoramic view of the city, you can also climb the minaret of this mosque. The revolving steps make you a bit light in the head, but the view is absolutely phenomenal! 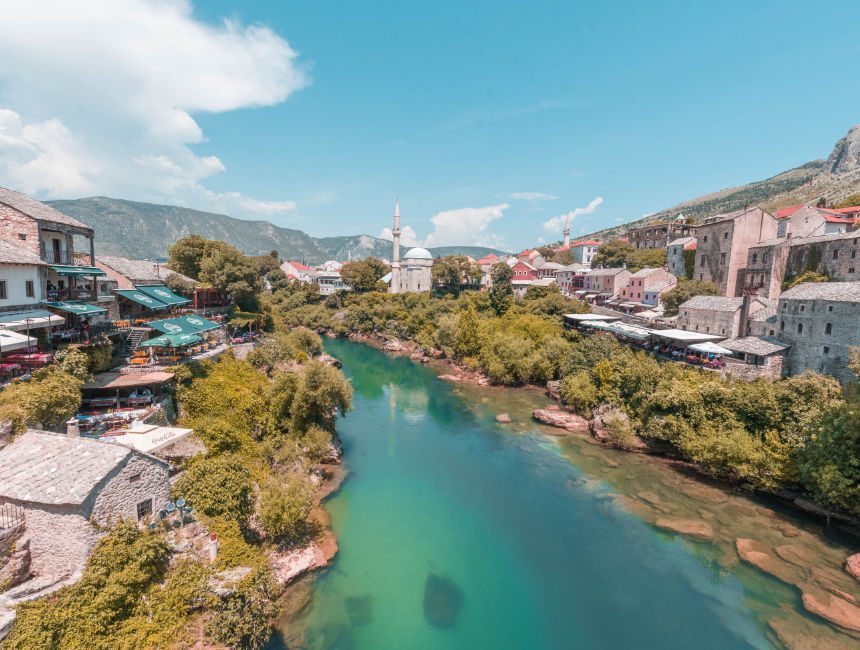 The view from the bridge of Mostar. In the distance you can see the mosque from where you get a beautiful view of the city. 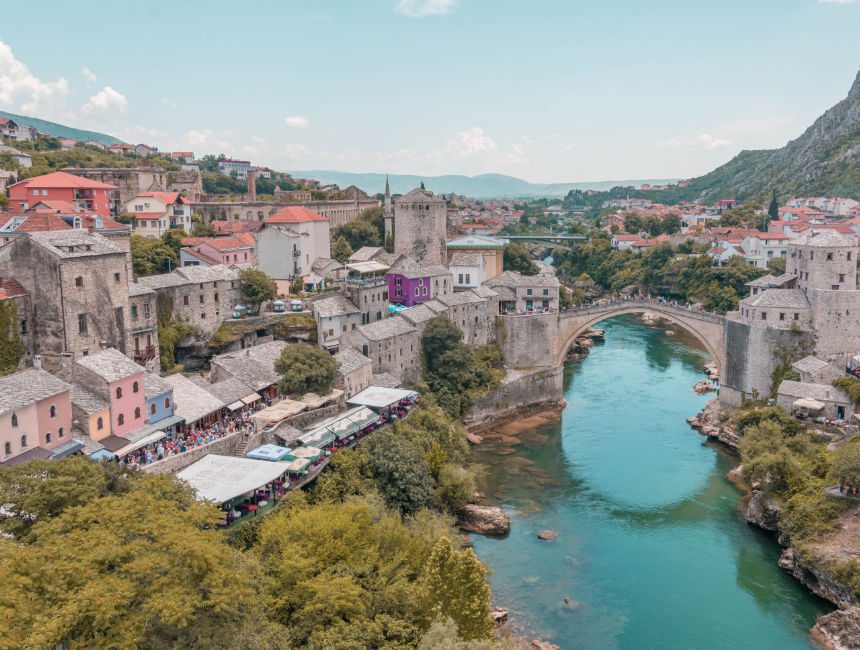 The view from the minaret of the mosque. Enchantingly beautiful!

Other things to see close to Mostar

To reach Mostar from Dubrovnik, you’ll be traveling for at least four hours. However, that time flies by if you also make a few stopovers along the way. Are you going by car, with a day trip or even by public transport? Try to incorporate these sights into your day planning as well:

If you’re interested in beautiful nature, you may not skip the Kravice waterfalls.
This smaller version of Plitvice is only a short detour and is definitely worth the trouble.

After a short descent you get to see a magical piece of nature. Five to ten waterfalls are giving the best of what they’ve got. The water that quickly flows over the moss and clatters loudly in the lake is really worth seeing and experiencing.
From the shore you can also rent a little boat to get even closer to the waterfalls. The view isn’t necessarily better, but it definitely is exciting to get so close to this beautiful nature!
In warm weather you may also swim around the Kravice waterfalls, but remember that the water is often still incredibly cold. So don’t jump in immediately, or else you’ll turn into an ice cube right away!
The climb back up can be a bit tiring, but all in all it’s not so hard. If you really don’t like to climb, then you can also take a small train that will take you back to the top. 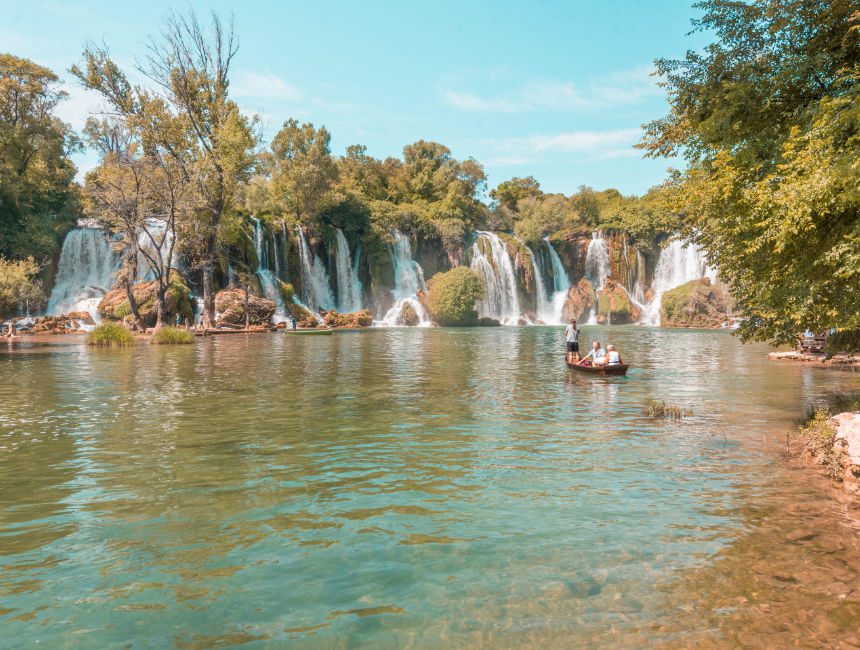 On the way back from Mostar to Dubrovnik, you’ll probably pass the tiny but picturesque Pocitelj. This town doesn’t seem to have changed much since the Middle Ages.
Sand-colored houses are crammed together and the narrow paths between them lead you to the impressive mosque. Slightly higher there is even a real fort from where you get beautiful views of this beautiful village and the Neretva river.
Because there are quite a few tourists stopping here after their visit to Mostar, the locals also sell their fresh fruit at ‘touristy’ price. €0.50 for 500 grams of super fresh strawberries or cherries that also taste great: I didn’t mind paying those whopping prices for these sweet fruits! 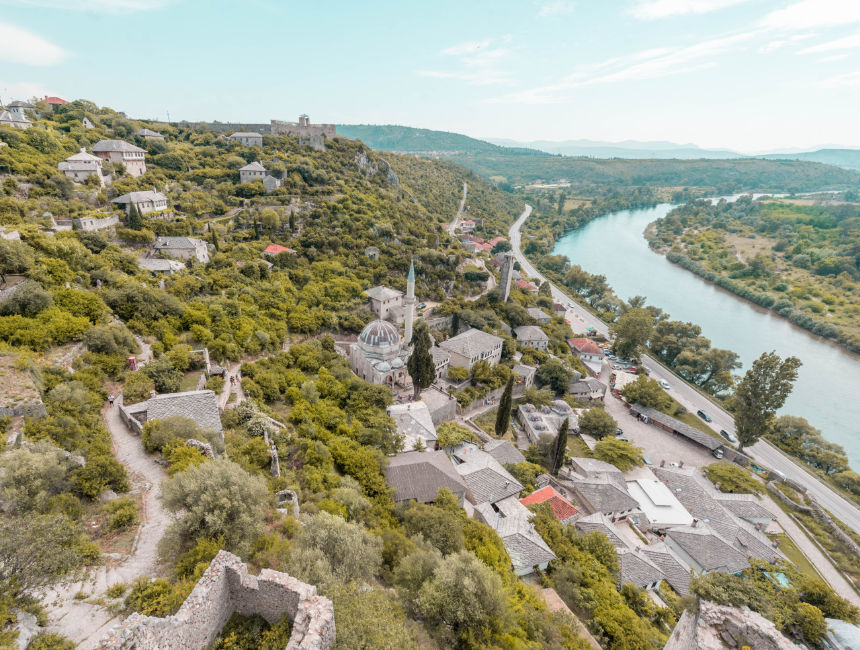 The views of Poticelj aren’t bad, don’t you think?

Some extra tips for your visit to Mostar 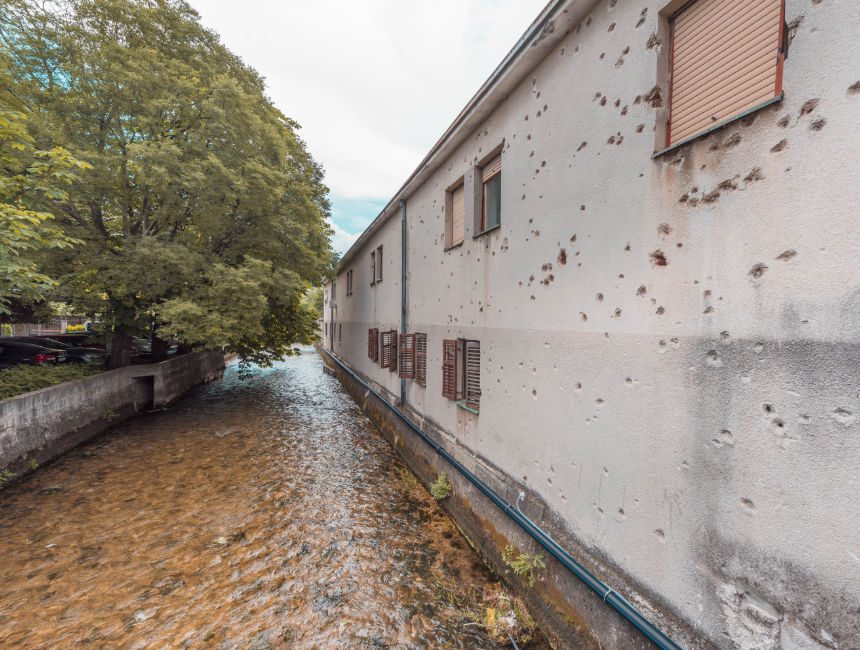 Make sure to take a look at the houses in the area. Some are still full of bullet holes!

Are you going to Croatia and are you still looking for an exceptional day trip? Don’t hesitate any longer, because I assure you that Mostar is worth a visit!
You can rent a car at a bargain price on websites such as Sunnycars, but remember that you also need a ‘green paper’ to cross the border. And that will cost you a lot of money. If you really want your own car, then I recommend to cross the border for a few days at least and explore some more of Bosnia.

If you only want to see Mostar (and Kravice and Pocitelj), then a day trip is still the best idea in my opninion.
You have lots of options via websites such as GetYourGuide and Viator.

On average, a planned day trip costs between €40 and €60 per person.

Car rental in Croatia: tips, my own experiences and how to find cheap car hire

A day trip to the Plitvice waterfalls