White sand beaches, Spanish colonial fortresses and impressive natural landscapes. These are just some of the many trump cards of Puerto Rico. Add to this the great gastronomy and tropical climate and you immediately understand why this paradise archipelago is worth a visit. From my own experiences, I wrote down the six most fun things to do in Puerto Rico. Do you have any more? Feel free to tell us in the comment section!

Do you want to book excursions in Puerto Rico?

Book them online with these tour operators. 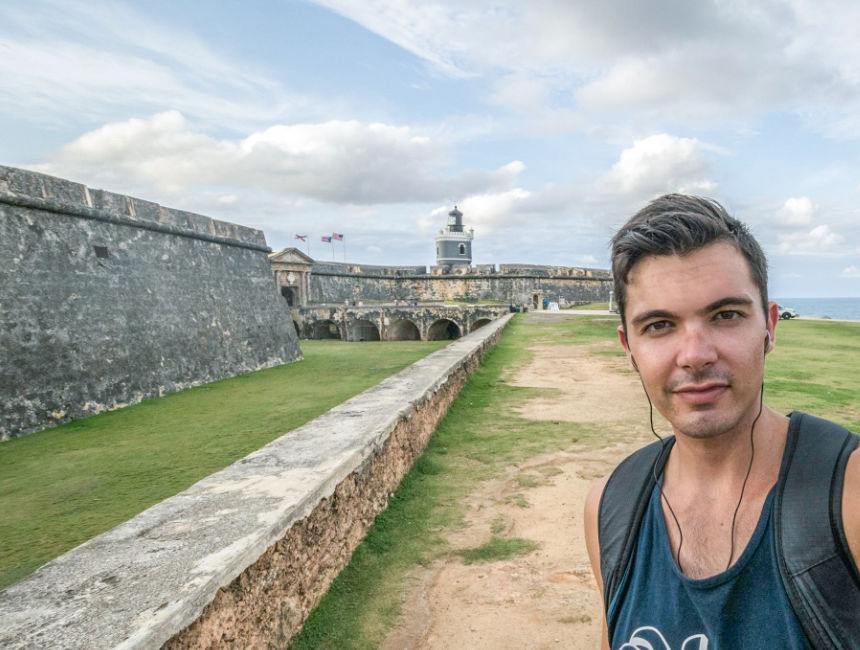 A brief introduction to Puerto Rico

Puerto Rico is an archipelago consisting of the main island of the same name and a number of smaller islands such as Mona, Vieques and Culebra. San Juan is the capital and English and Spanish are the official languages, with the latter dominating. No wonder if you know that Christopher Columbus, in person, claimed the island in 1493 on behalf of the Spanish Crown. Despite frantic efforts by the French, Dutch and British, the Spaniards have reigned here for four centuries and more than just put their mark on the country. In 1898, it was the Americans who finally managed to conquer the country, and as a result, Puerto Ricans are by law residents of the United States. 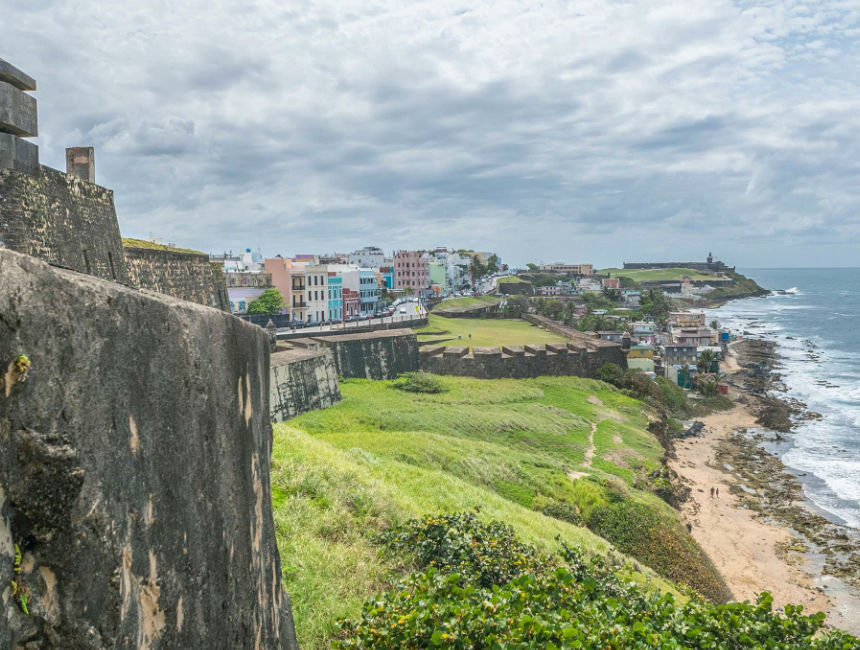 In San Juan you’ll find the most sights, but don’t forget to explore the island. I was surprised about how beautiful Puerto Rico really is!

The six most beautiful places to visit in Puerto Rico

Old San Juan is in a way atypical for Puerto Rico because you won’t find any beaches, no resorts and no wonderful natural beauty. This place is all about history. This settlement was established in 1509, making it the oldest in the country. It’s therefore not surprising that Old San Juan is included in the list of UNESCO World Heritage sites. This walled city combines tropical colors with an almost timeless magic, making this place one of the most enchanting in the Caribbean. You can easily stroll around for hours within the city walls. In terms of history, there are certainly no better sights in Puerto Rico.

What you shouldn’t miss in Old San Juan: 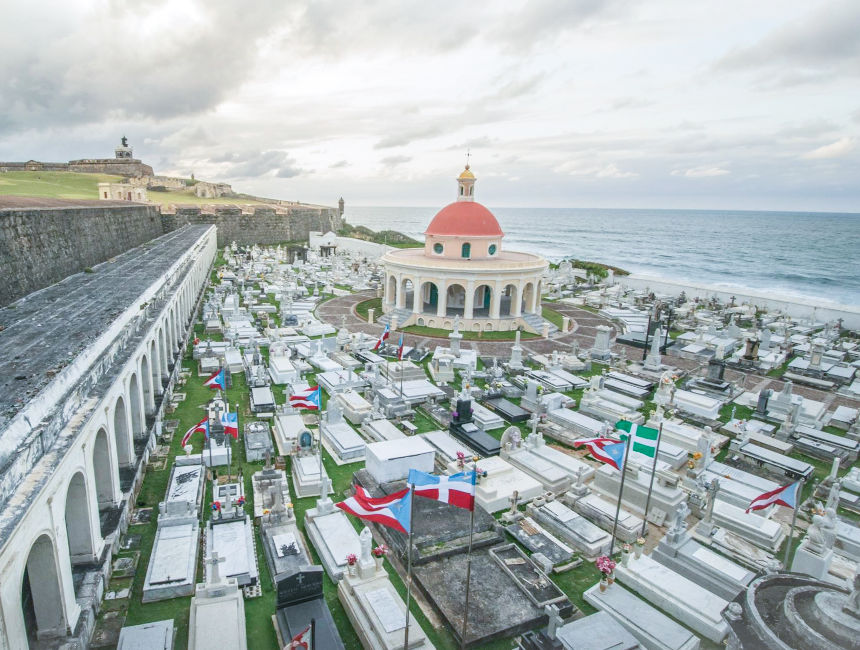 The cemeteries along the steep cliffs are impressive!

Although the foundations for this fort were already laid in 1539, the six-storey fortification was only completed in 1787. El Morro looks down from the promontory at the entrance to San Juan Bay and is one of the largest forts that the Spaniards ever built in the Caribbean. In this gorgeous building you’ll find dungeons, barracks, narrow corridors and sentry houses that have become a symbol of Puerto Rico.
When you walk on the ramparts you’ll discover that the original guns are still focussed on the ocean, ready to send any intruder back home. From here you can also enjoy an overwhelming panoramic view of the coast from Old San Juan to Condado and even further. It’s no wonder that the castle San Felipe del Morro is also on the list of UNESCO World Heritage. 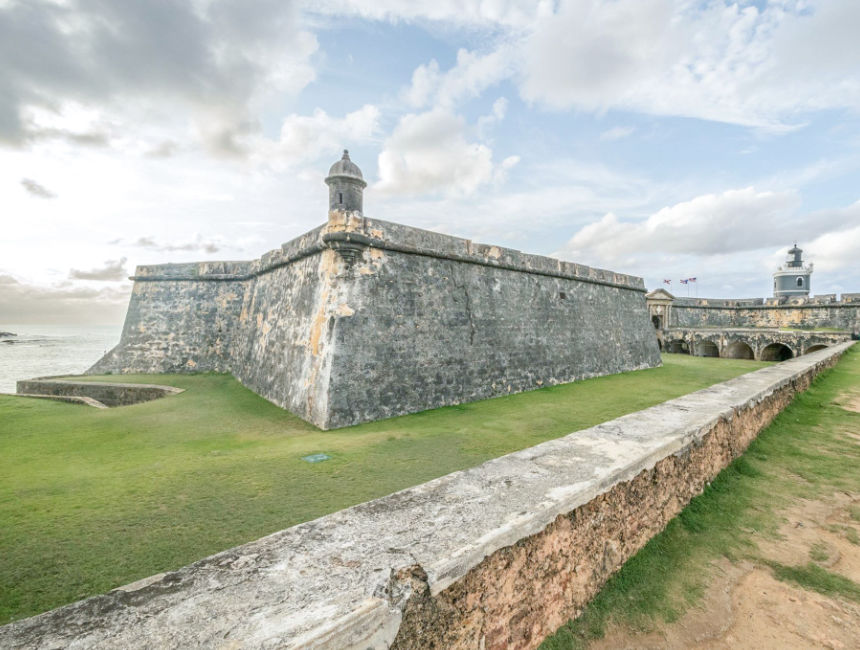 The castle of San Felipe del Morro is huge and very interesting. Moreover, you get very nice views from here.

Ponce is the second largest city in Puerto Rico and was named after Juan Ponce de León y Loayza, the great-grandson of Juan Ponce de Leon, the Spanish conquistador. The city is also known as La Perla del Sur (the Pearl of the South) and that would definitely not be a lie.
The most fun attraction here is the Paseo Tablado la Guancha (the promenade of La Guancha). This promenade cost no less than 2.6 million dollars, but in return it attracts more than 750,000 visitors per year. These come here not only for the view but also for the many nice eateries that mainly sell “bacalaitos”, or fried cod. The empanadillas (small empanadas) are also incredibly tasty. From Ponce you can also take a boat to Caja de Muertos (Coffin Island). Don’t be fooled by this gruesome name because you’ll find fantastic sandy beaches here. Another thing you can’t miss in Ponce is the Catedral de Nuestra Señora de Guadalupe. Phenomenal! 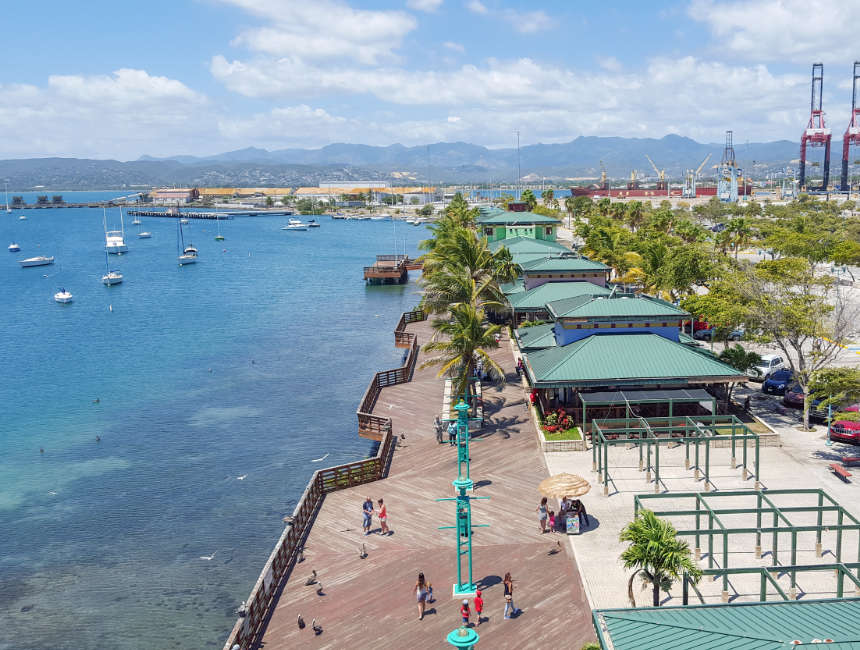 Ponce may give an outdated look, but it’s much less touristy than San Juan.

The name Vieques doesn’t ring a bell to most people, except for die-hard film fanatics who know that this island was used as the location for the film Lord of the Flies. Fortunately, you don’t really find a colony of children trying to kill each other out here, but instead you’ll get to see enchanting beaches. Once Vieques was also home to an airport of the US Navy, but it was dismantled in 2003. Project developers immediately understood the potential of this paradise island and saw the dollar signs multiply in their heads.
Fortunately, environmental authorities quickly intervened and all the former military land (no less than 70% of the area of ​​Vieques) was named fish and game reserve. As a result, the largest part of the island remains untouched and everyone can enjoy this natural beauty. Vieques is undoubtedly one of the most fun things to do in Puerto Rico.
If you have enough time, I recommend to stay overnight on Vieques. In the evening and at night you can take a trip to the Bioluminescent Bay. A part of the beach where special micro-organisms provide a light spectacle because of the waves that create energy. 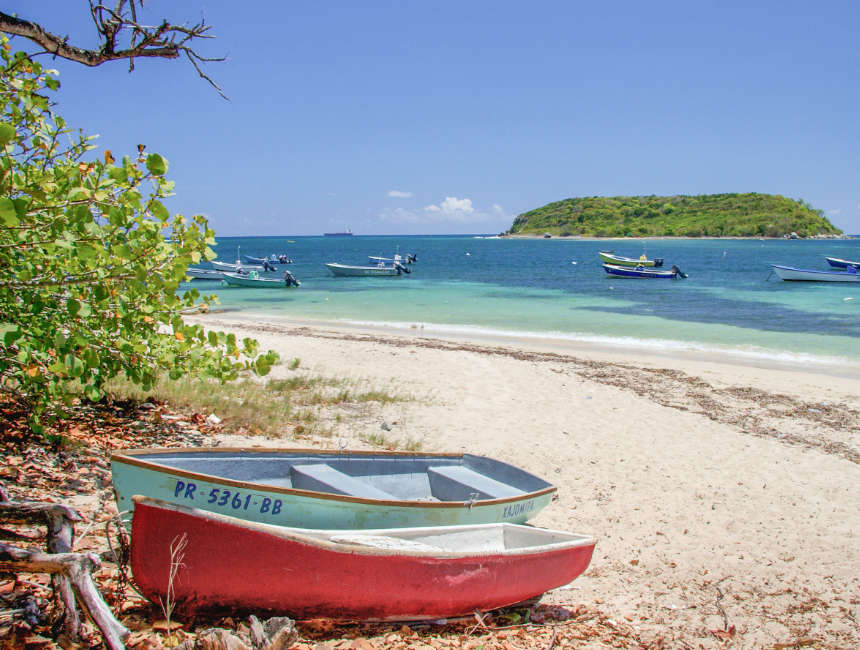 Puerto Rico has a couple of smaller islands, and Vieques is one of the most paradisiacal!

El Yunque is a subtropical and mountainous rainforest that lies in the east of Puerto Rico and is located just 45 minutes from Old San Juan. In El Yunque you’ll find huge waterfalls and with Mt. Britton there’s even a mountain that you can climb. You won’t be bored here for a minute because you can go caving, snorkeling, kayaking and explore the mangroves. Perhaps you’ll even see one of the famous carnivorous snails! 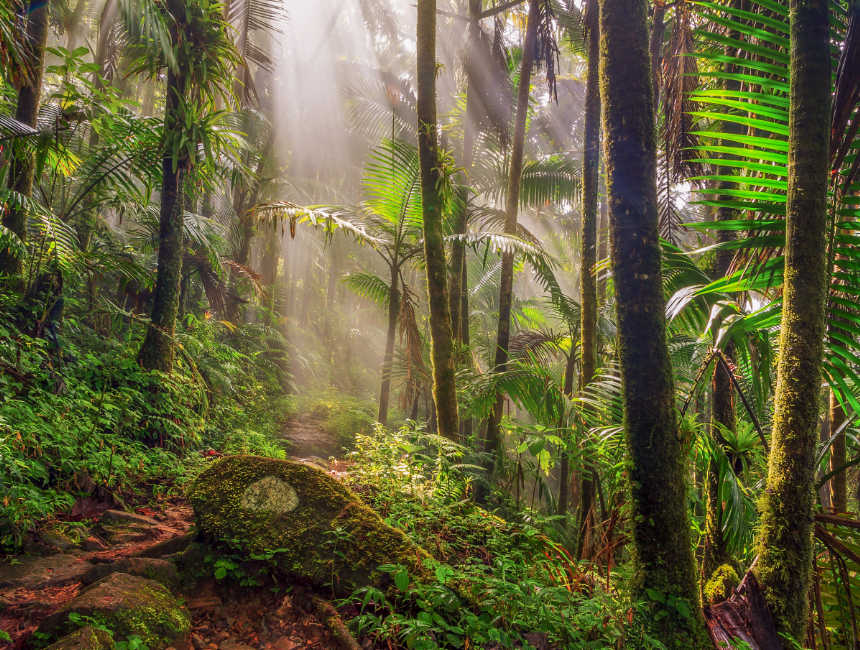 I didn’t see this ‘cave of the Indian’ in any travel guide, and that surprises me to this day. This cave complex isn’t close to the other sights of Puerto Rico, but it is so damn beautiful that I have to recommend it to you!
Gigantic rocks and cliffs characterize this unique highlight, and it all starts from a mossy beach… Once you have climbed the steep rocks you can enjoy the phenomenal view before you descend into ‘La Cueva del Indio’. In these caves you can see beautiful drawings made hundreds of years ago by the native population; the Indians. 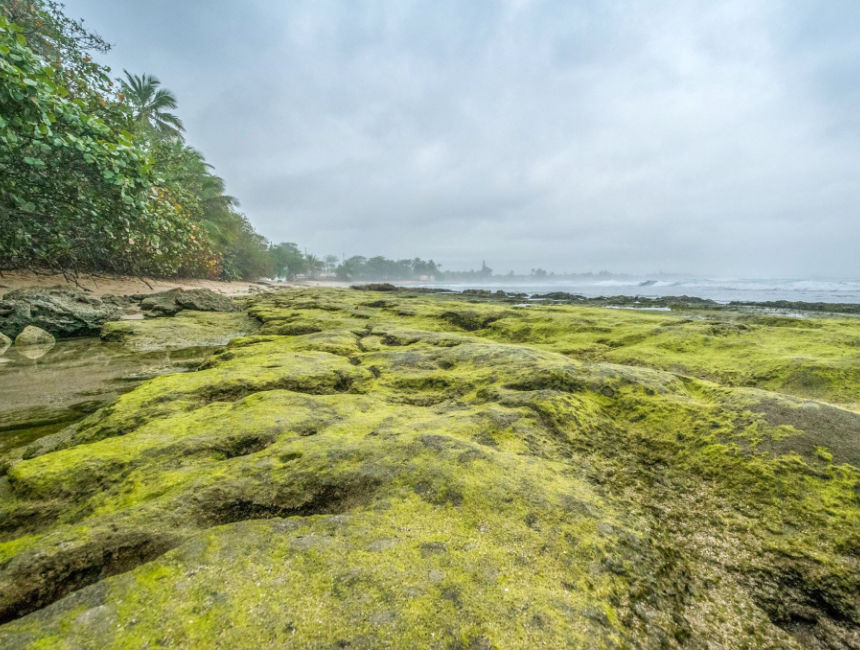 Before you climb the fantastic rock formations, you must first continue along the slippery moss. Fortunately there’s also a path nearby.

Doesn’t it look phenomenal?! And yes, that’s me in the distance. Do you now believe how gigantic these rocks are?

Puerto Rico has more to offer than you think and is therefore an extremely versatile holiday destination. It’s easy to understand why so many countries wanted to conquer this paradise.

Do you want to explore one of these top attractions? Or do you want to book one of the other dream activities? Book your tour or excursion in advance:

» All tours and excursions in Puerto Rico

A visit to the catacombs of Rome