Just as Bernini and Michelangelo have left their mark on the Vatican and Rome, Gaudi and Barcelona are inseparable. Everyone wants to visit the Sagrada Familia, the famous church of Gaudi churc Barcelona. But of course there's also the houses of Gaudi and the world-famous park of this artist. And of course there is much more to see and experience! I'll tell you everything you need to know about Gaudi's masterpieces in Barcelona. 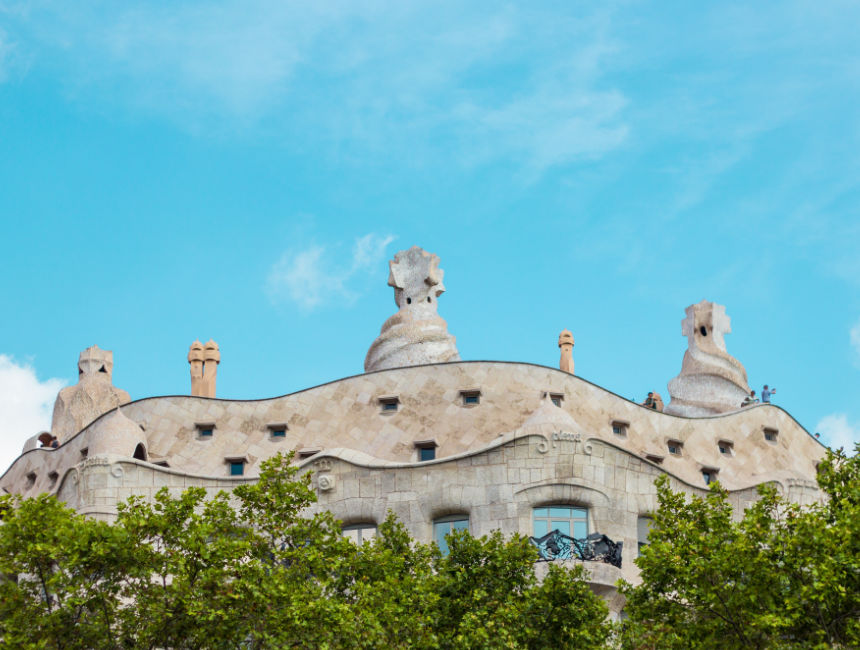 On June 25, 1852, Antoni Gaudi i Cornet saw the light of day in Reus, Catalonia. His father was a copper smith and he was the youngest of five children, of whom only three would reach adulthood. His great passions were architecture, nature and religion. His style falls under Catalan modernism, which is a mix of art nouveau and jugendstil. Seven of his buildings would eventually win the coveted title of UNESCO World Heritage. Throughout his life he remained a pious Catholic and many religious images can be found in his work. This eventually earned him the nickname “The architect of God”. 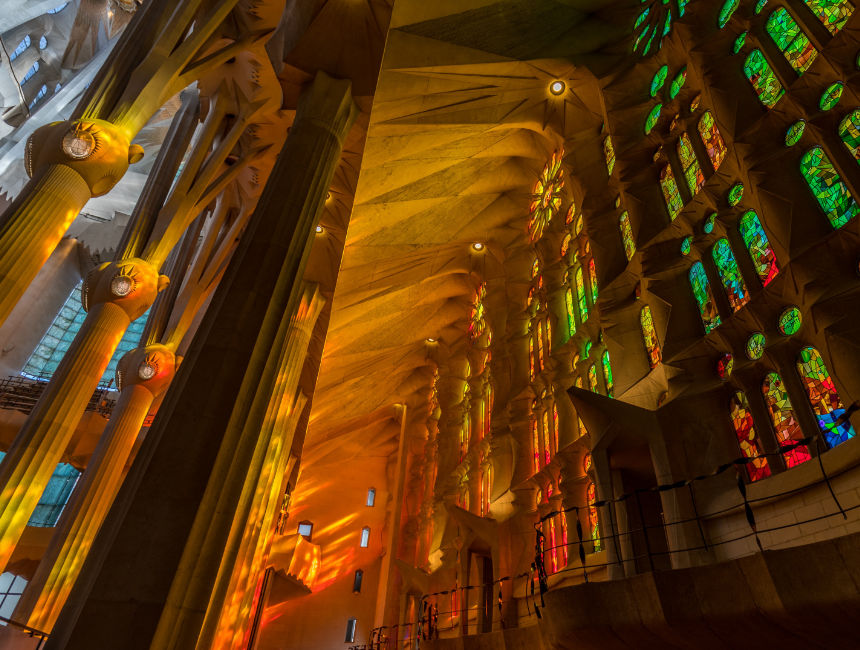 Divine. That’s the least you can say about the interior of the Sagrada Familia!

The most important buildings of Gaudi in Barcelona

The most famous building of Gaudi in Barcelona is without doubt the Sagrada Familia. However, there is so much to tell about this that it is worth an article in itself. I will mainly talk about the other houses of Gaudi and the famous Gaudi park in Barcelona (Parc Guëll). If you don’t want to waste time searching for these buildings and at the same time learn more about them, then it might be nicer to book a guided walking tour, a tour with a segway or a bike tour that will take you to all these masterpieces.
Below I sum up all the works of Gaudi in Barcelona that you absolutely mustn’t miss:

This famous church of Gaudi in Barcelona is perhaps one of the most famous buildings in the world. Since 1882 people have been working on this masterpiece almost non-stop and the final delivery date would be 2026. On the outside of the Sagrada Familia you can see hundreds of detailed sculptures that all depict stories from the bible. As if all that isn’t impressive enough, there is also a fantastic interior. Especially the stained glass windows and the masterly shading is fantastic here.
Queues for this masterpiece often run up to three hours. It’s therefore certainly not a bad idea to purchase a priority ticket. They cost only €20 and this way you save you a lot of time. 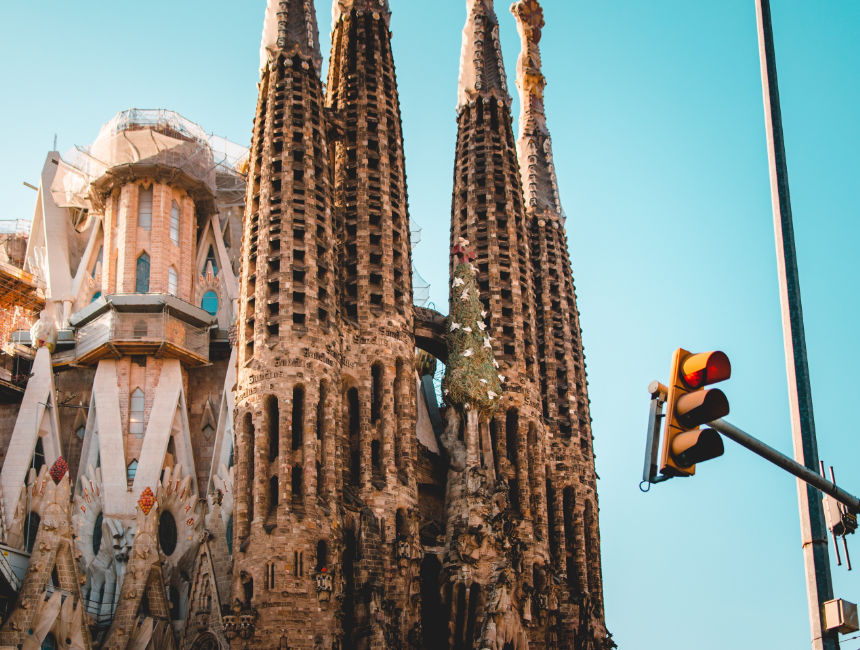 If there’s only one building you can visit, make sure it’s this masterpiece!

Nicknamed La Pedrera or the quarry, this is perhaps the second most famous of Gaudi’s buildings in Barcelona. The wavy front will immediately attract your attention, but perhaps the most unusual is the surrealistic roof, on which you seem to walk in Alice in Wonderland. Casa Milà put the Modernista movement (the Spanish version of Art Nouveau) on the map and that is absolutely the merit of the genius Gaudi.
An absolute must is to see the great audiovisual performance on this beautiful roof at night.
Since Barcelona has so many tourists at any given time, the queues can be long. It’s therefore not a bad idea to buy a priority ticket for Casa Milà. Such a ticket costs €22 per person. 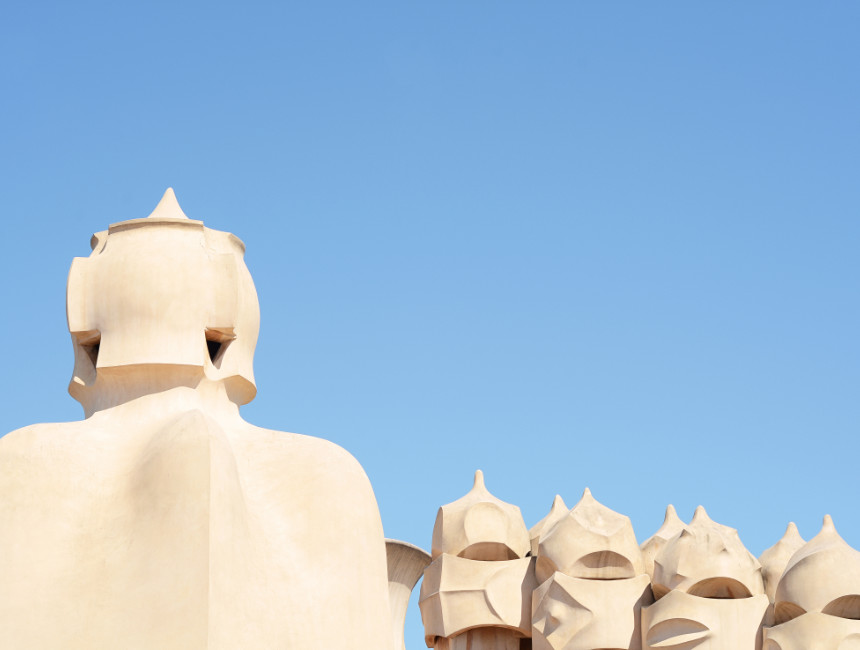 Casa Milà. One of Gaudi’s most famous buildings.

Fairytale-like. This is the best way to describe Casa Battló. Forms of animals, curves that resemble vines, suggestions of bones and skeletons topped with the shiny pieces of ceramics and glass… This masterpiece will surely amaze you. The most remarkable thing about Gaudi’s building is without a doubt the roof, which looks like a dragon that protects the house. Buying tickets online cost €24.50 per person, but then you may skip the (long) queues. 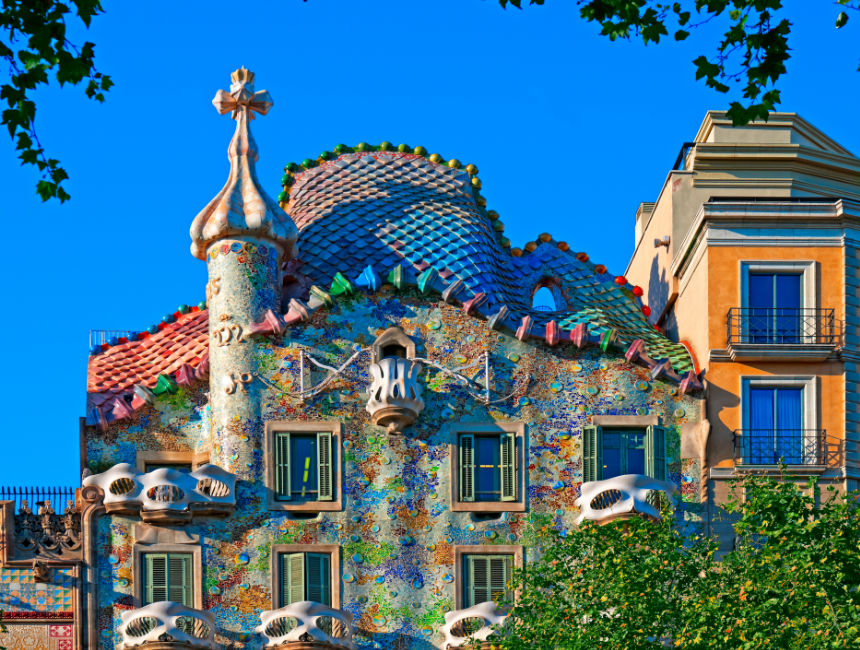 Casa Batllo, one of my personal favorites.

This was the first house of Gaudi that he has ever designed on behalf of Manel Vicens who wanted to use it as a summer house. Although this building by Gaudi isn’t as extravagant as the two previous ones, it certainly catches the eye because of the mix of architectural styles. It also serves as a museum and you can visit that for €12 per person if you book the tickets online. 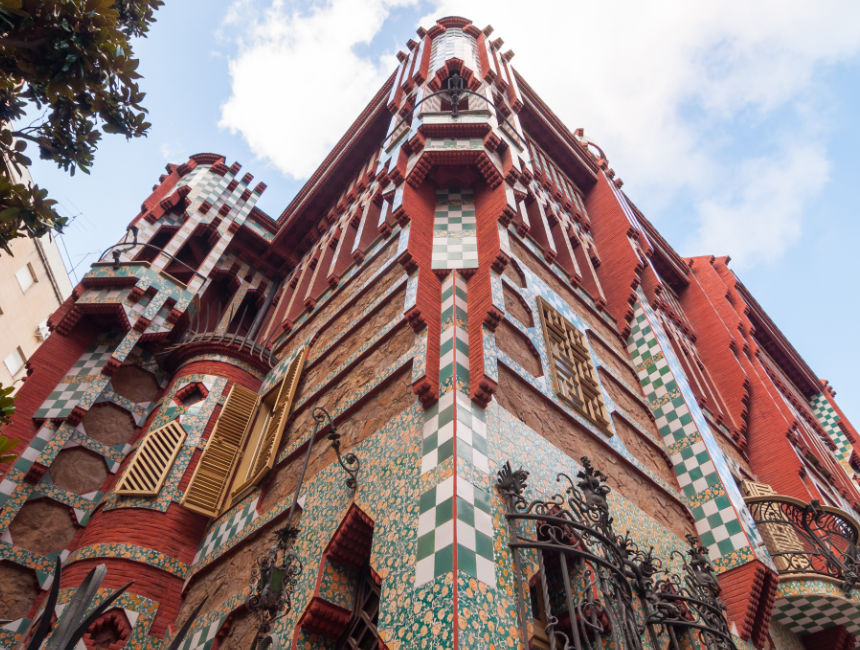 The first house that Gaudi has ever designed. And even that was a gem!

This Gaudi house is also known as Bellesguard, or “beautiful view” and the famous architect was inspired by a medieval castle for the design. This stood on the same ground and was built for King Aragon in the early fifteenth century. In the centuries that followed, the building fell into decline, until Jaume Figueres bought it in 1900. Because Gaudi was such a perfectionist, his client couldn’t see the end result because he would die before Casa Figueres was completed. Gaudi, for example, needed months to place the tendacis (his iconic mosaics), which makes the house so beautiful today. Due to the delay and extra costs the family of the client could never live in the house and they had to sell it in order not to go bankrupt. A small sacrifice for art, if you ask me. 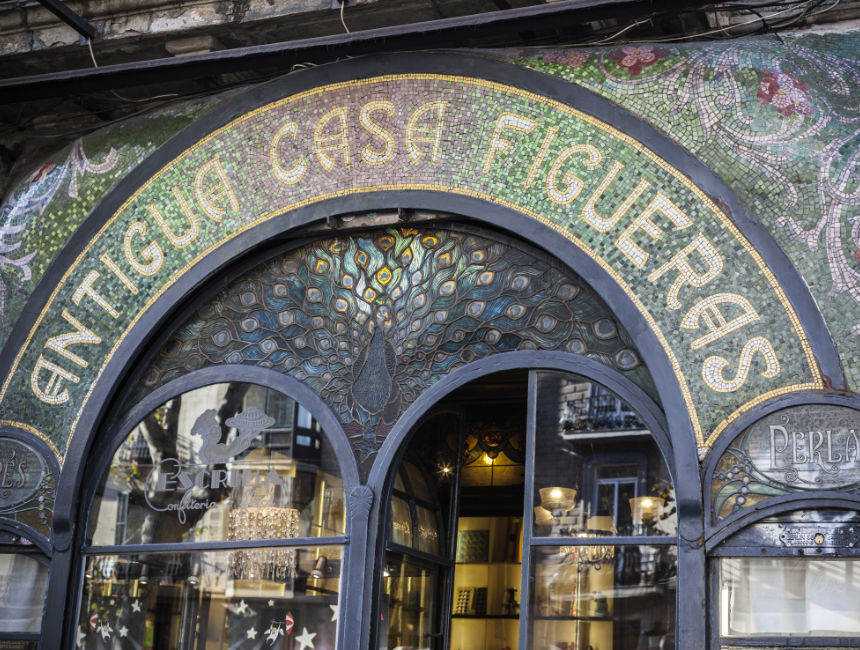 With this house of Antoni Gaudi it is mainly the ground floor that steals the show.

This is one of the least startling buildings of Gaudi in Barcelona, mainly because it had to be crammed between other houses. But also because it was located in one of the most elegant districts of Barcelona. The symmetry and balance are quite unusual for Gaudi’s work. Yet you can still find some modernista elements here, such as the curves and the double façade at the top. The mushrooms above the central bay window refer to the favorite hobby of the owner (a textile manufacturer). Whatever that might’ve been… 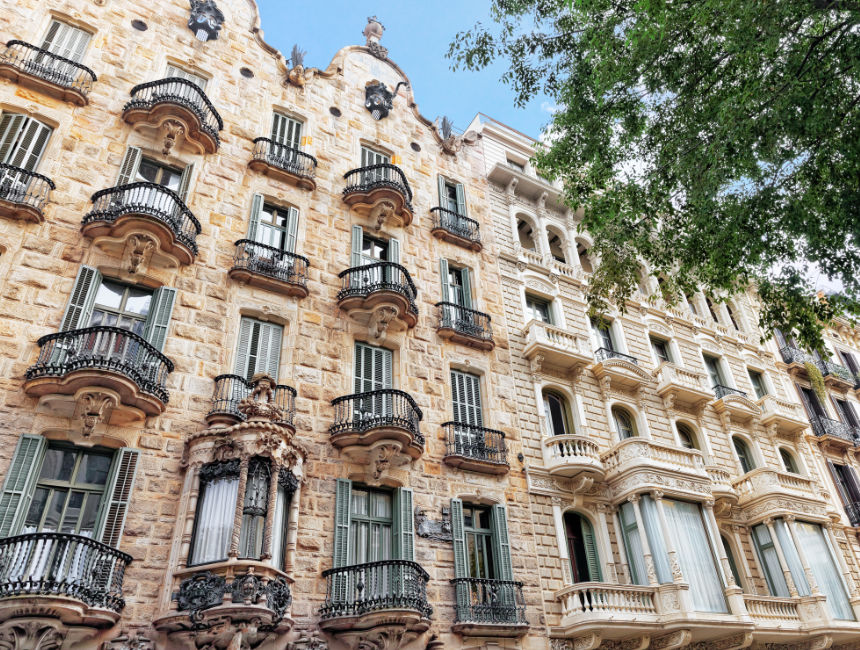 Although this is less showy than the other Gaudi buildings, you clearly see his hand in it still.

This famous park of Gaudi in Barcelona is also one of the most popular sights of the Spanish metropolis. It was designed at the request of Count Eusebi Güell, who wanted to build a stylish park for the aristocracy of Barcelona. He also had plans to provide housing here, although only two houses were finished. One of them is now decorated as a museum.
The eye-catcher of this park is the terrace from where you have a magnificent view of the Catalan capital. Numerous tourists (and locals) sit down on the iconic benches decorated with mosaic, shards of ceramics and iron balustrades.
Access to the park costs €7.50 online and if you also want a guided tour you pay €25 in total. 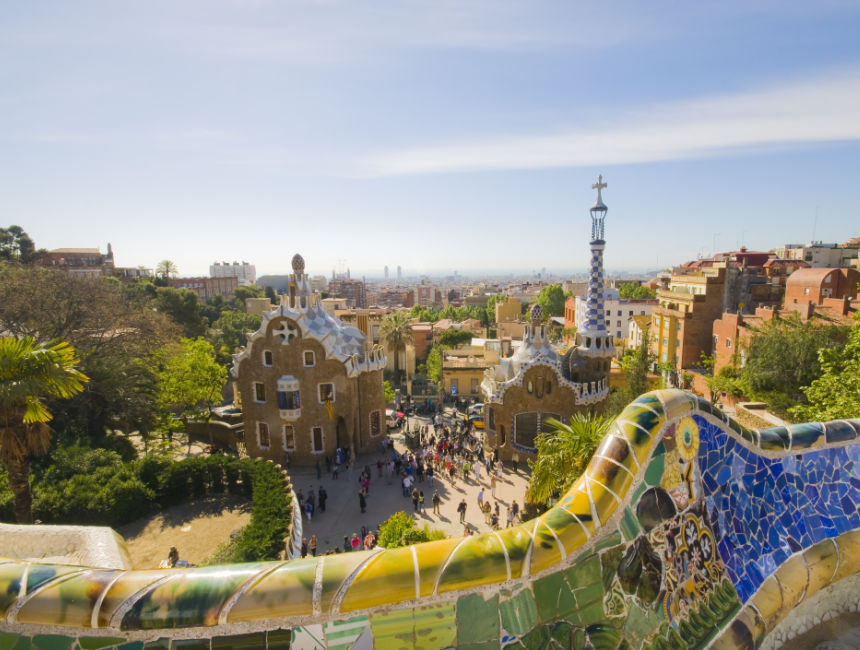 Do you have enough of all those houses of Gaudi? Then visit his world-famous park instead!

Before the design of the park, Gaudi had already been summoned by Count Güell to build a palace that would become an extension of their home on the Ramblas. The main purpose of this was to receive guests during one of the many parties organized by the Güell family. The building is also known for its innovative conception of space and light. 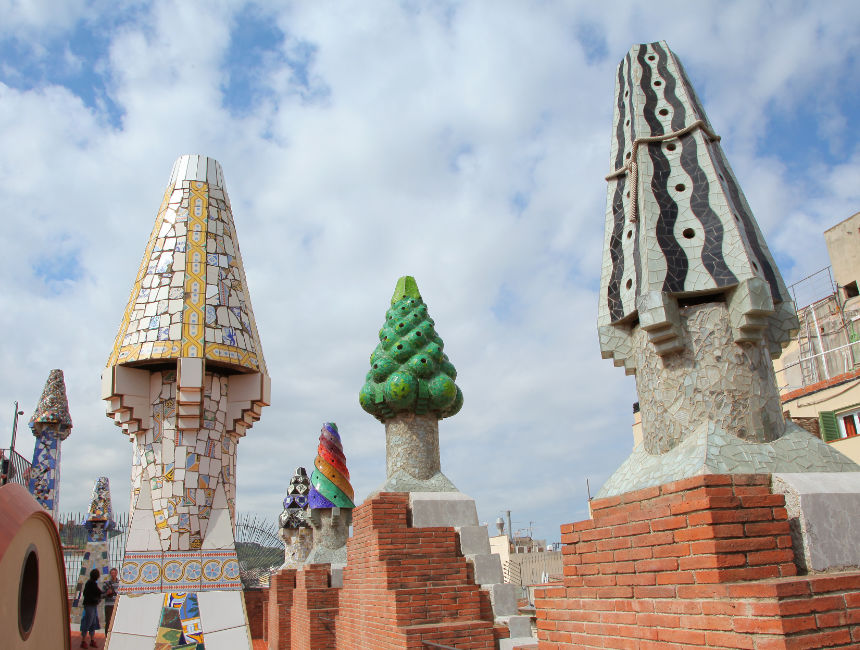 And we close this list with another house of Gaudi. These crazy colors on the roof are quite something, don’t you think?!

Other buildings of Catalan modernism in Barcelona

Although Gaudi was the main exponent of this art movement, there are still a lot of other beautiful buildings of the Modernismo Catalan in Barcelona. As you can see from Gaudi’s designs, this building style is mainly characterized by a symbiotic relationship with nature and rich and detailed decorations, as well as undulating lines and asymmetry.
You shouldn’t miss these architectural pearls either:

Lluís Domènech i Montar designed this building, which looks more like a university than a hospital. It was also used effectively as a hospital from 1930 to 2009, afterwards the city decided that it could serve as a museum. Since 2014, this palace and its twelve pavilions have been opened to the public. Buying tickets online costs €14 per person. 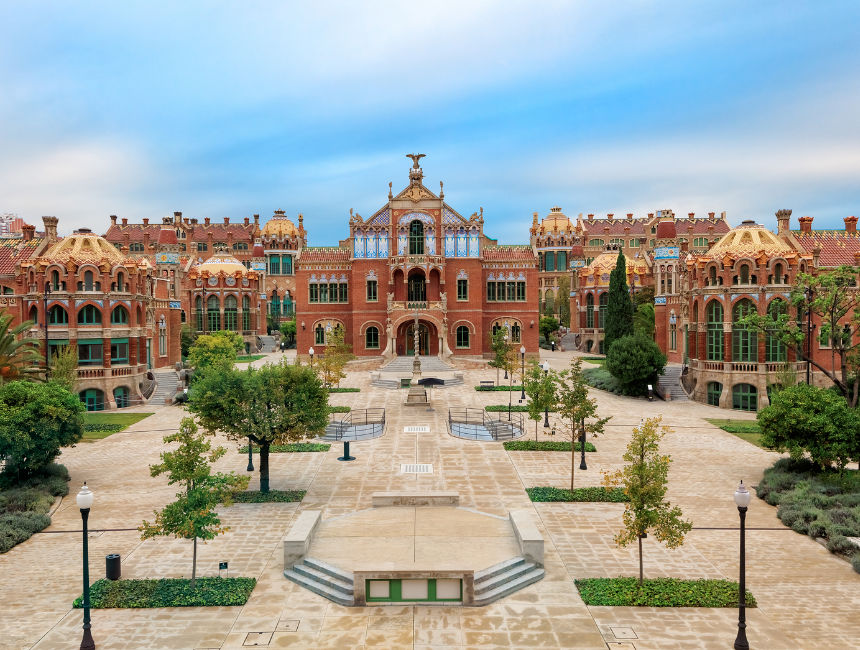 The Hospital de la Santa Creu in Sant Pau. A mouthful, but that’s more than allowed if it looks so beautiful!

This Palace of Music was also designed by señor Montaner and the inside is as beautiful as the outside. Therefore it can be a nice idea to attend a concert instead of a tour (€20). You can choose from a big selection such as guitar music, flamenco and classical music. The beautiful interior combines images of music, flowers and the names of famous composers such as Bach and Beethoven. 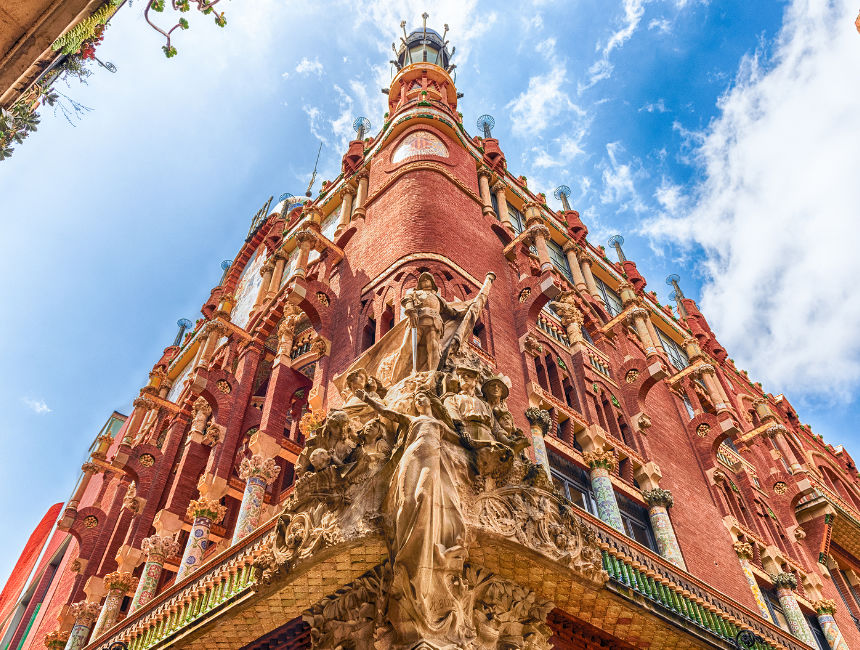 Fantastic from the outside, but wait until you see the inside!

Yet another famous architect of Catalan modernism is Josep Puig i Cadalfach. The design of his factory is particularly minimalistic and the building was later used as a department store, garage of the national police and since 1963 it has been owned by the Caixa bank. Since 1992 it has been a cultural center where many exhibitions about art, film and photography take place. 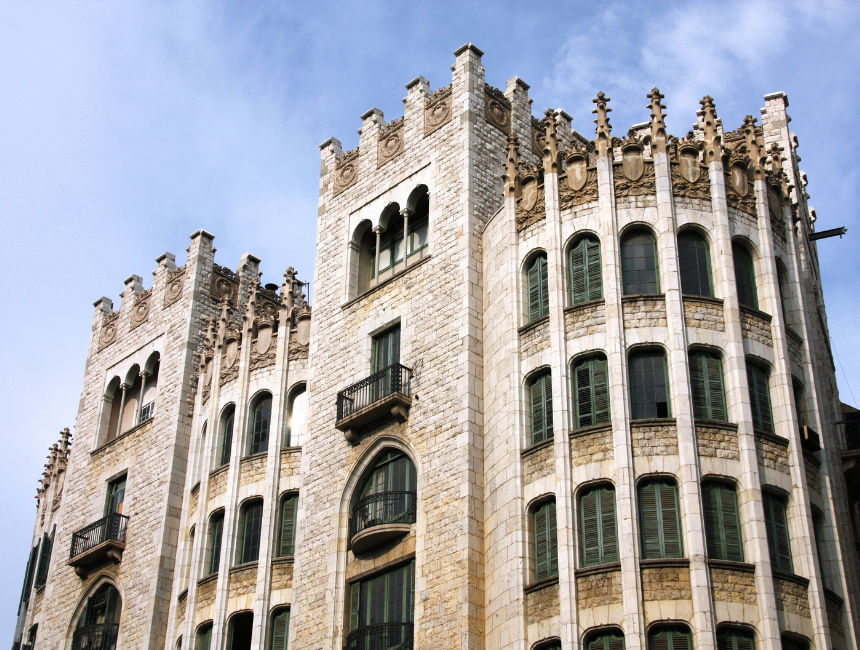 Art-nouveau and minimalism can work together perfectly! This building proves that.

No building, but interesting nonetheless: the Museo del Modernismo

Another must visit is the Museo del Modernismo (€10), so that you can get a picture of how modernist buildings looked inside. Not only the exterior of these structures were unusual, the interior as well. You’ll find many tables, chairs and cabinets that are decorated with dragons, bats and women. In addition, you can also admire modernist paintings and sculptures here.
And thanks to Virtual Reality technology, we can also explore Gaudi’s work in virtual reality. This is how his architecture really comes to life!

Reserve tickets online for all this beauty

Barcelona is one of the busiest cities in the world. It doesn’t come as a surprise that you sometimes have to queue for hours before you can enter any of these buildings. Prevent this inconvenience by purchasing your tickets online. Below you can already find some tours and tickets. Don’t you find what you are looking for? Take a look at websites such as Tiqets, Ticketbar, Viator of GetYourGuide.

You might agree with me that Barcelona wouldn’t be the beautiful city that it is now without the architectural achievements of this genius. Gaudi and Barcelona are therefore a match made in heaven and that is exactly what a city trip to this metropolis is. Heavenly! 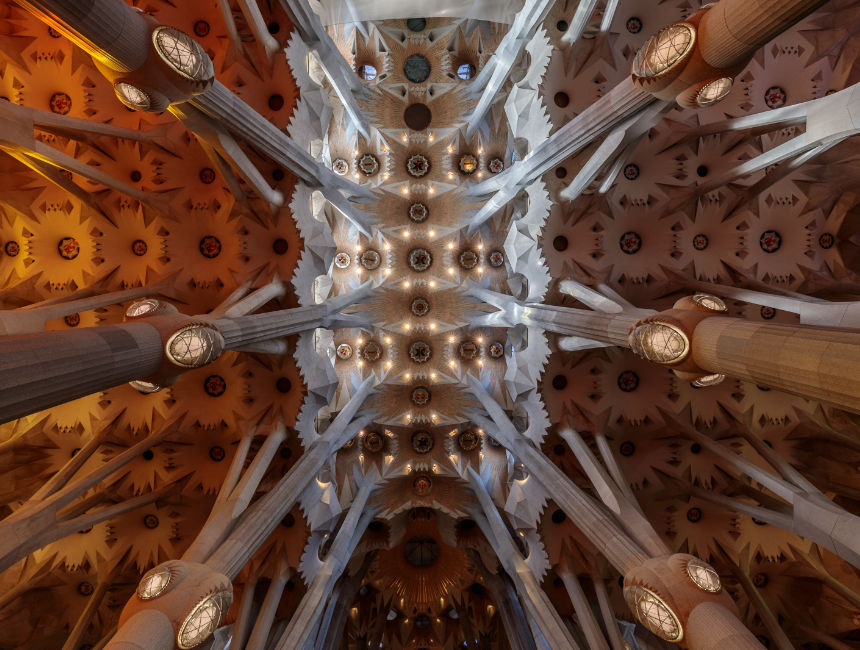 The inside of the Sagra familia. Unimaginable craftsmanship!

Car hire in Barcelona: discover Catalonia with these tips and a cheap rental car

33x the top sights in Barcelona and its surroundings: what to see and do?

A visit to the Sagrada Familia: info, tickets, inside photos and tips to skip the long lines