Nazareth is relatively small and you can explore this holy town in one or even in half a day. It would therefore be a shame to spend all your time here... Instead we went exploring some further away sacred spots with our merry group. Capharnaum, the birthplace of many apostles, and the Mount of Beatitudes were two of them. To finish the day, we visited a beautiful nature park and... We went to the border with the war-torn Syria! 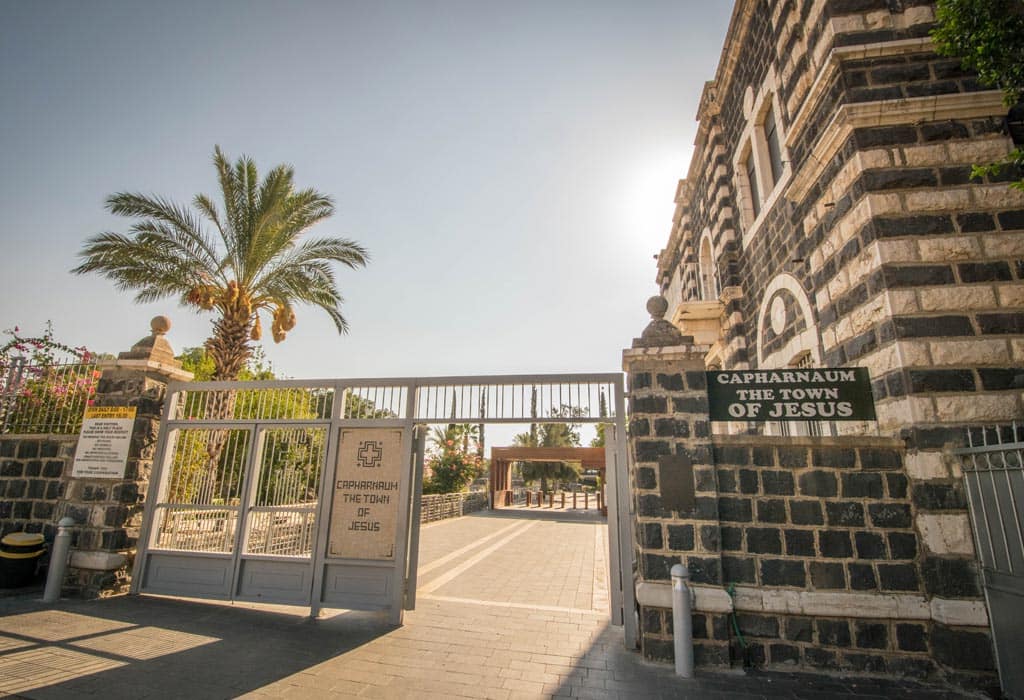 Capharnaum is the Israelian city where Jezus spent a lot of his time growing up.

At an hour’s drive from Nazareth you’ll also find the city where he performed many miracles, and where a lot of his apostles grew up (or near this city). Capernaum or Capharnaum.
To explore this pilgrim town, you pay three shekels (60 cents) and if you’re early enough (opening hours from 08:00h to 16:30h) there are no hordes of Asians trying to uncover every stone, pillar or salt pinch with their photographing equipment.
Besides the ruins there is also an ancient synagogue and a beautiful view of the Sea of Galilee (actually it is not a sea but a lake), for the rest there is not much to see. Yet it is worthwhile to make a detour to this faded town as it is very close to many other attractions and must-see’s!.

Behind this city (see photo below), you can also see the sea of Galilee. The name may ring a bell, because it was here that Jesus was baptized by John the Baptist. 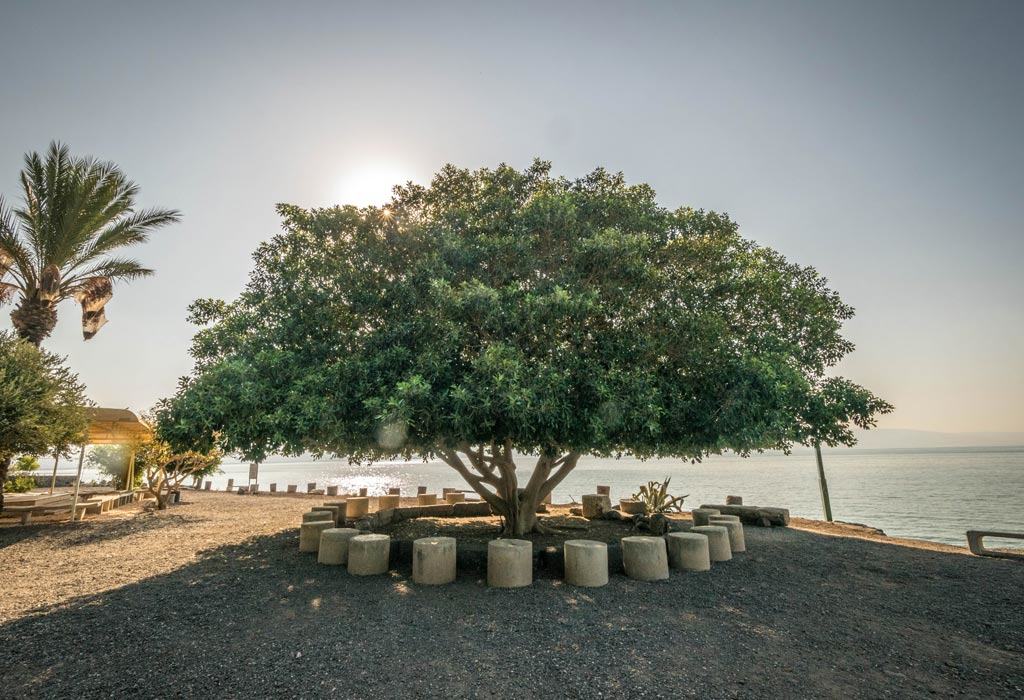 The spot I liked most in this little town. Do you think the apostles also sat under this tree?

If I’m honest I had never heard of the Mount of Beatitudes before. Luckily my Costa Rican friends (who had absolutely no idea what it was exactly as well) had internet on their phone and so they could inform us more about this special place.

In the Bible, Matthew wrote down that Jesus held his famous Sermon on this particular site. In this sermon, many basic principles for the Christians are being told. A kind of “Christianity for Dummies”, you could say.

A lot of pilgrims from all over the world visit this holy place. In the midst of this well-kept piece of sanctuary you will find a beautiful church. Please note… You can only go inside if your knees and shoulders are covered! 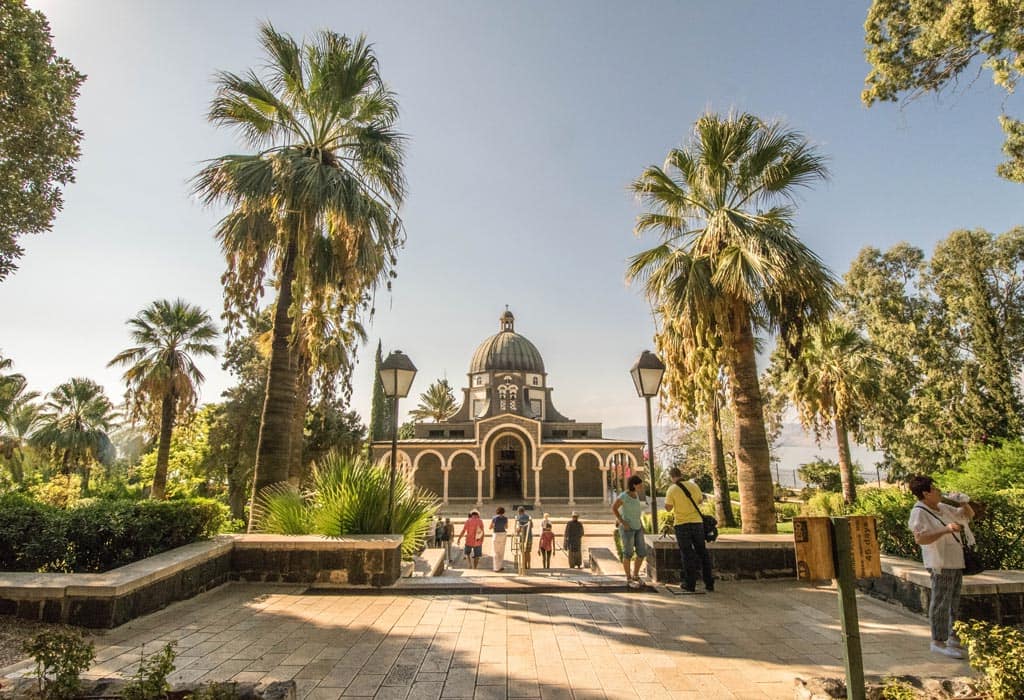 The Mount of Beatitudes, the place where Jezus gave one of its most famous sermons.

Nazareth, Capernaum and the Mount of Beatitudes were enough holy places for one day. I’m not a saint after all!
After our last little prayer asking for forgiveness, we moved towards the Golan heights. Legally this region continues to belong to Syria, but for “security reasons” Israel occupied this region during the Six Day War in 1967.
This high place is an excellent strategic point where Syria (or another country) might attack the many cities of Israel.

In this rather beautiful region we went to have lunch first in a small restaurant, run by Druze.
The Druze is a form of Islam, but one that is accepted in Israel. This religious community doesn’t really see themselves as the other Arabs, because -for example- they accept the compulsory military service that Israel imposes on them while the other Arabs do not.

After a delicious dish (definitely try Druze pita!) We moved on to the Banias nature preserve. A huge area, especially known for its numerous waterfalls. I think they reminded me a wee bit of the Plitvice Lakes in Croatia. Among the many shady trees there were a lot of cobwebs. The spiders clearly searched for cooler regions in this hot climate!
Unfortunately we did not have very much time in the park and we could not see that much from the park, because a little walk down the park would have given us an amazing view over some of the ruins in this region. 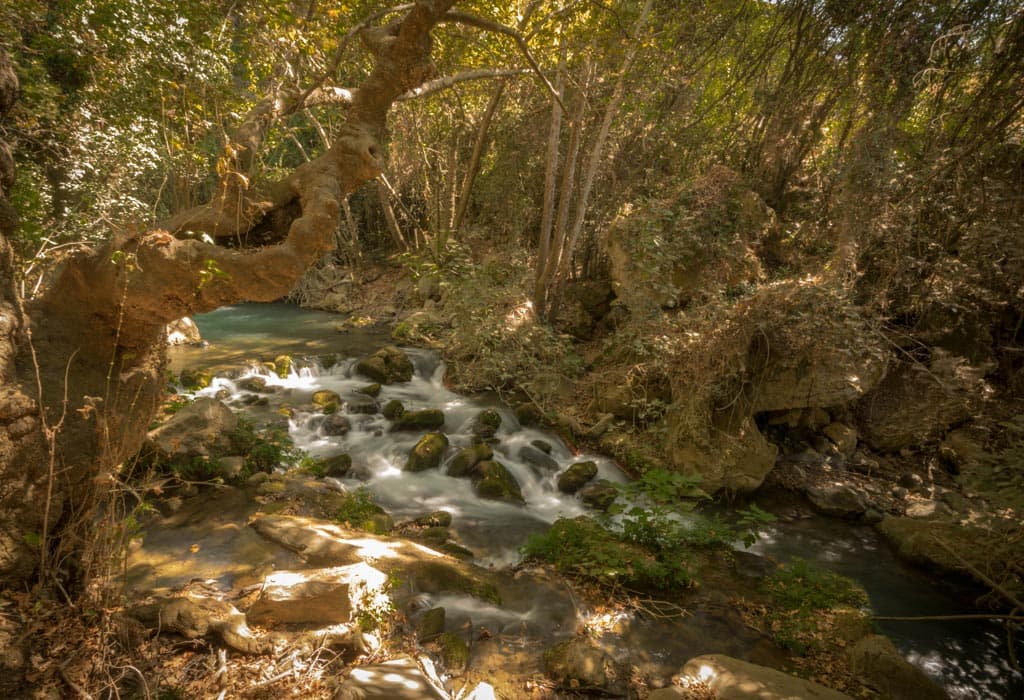 The Banias nature reserve in Israel with its many waterfalls.

The most exciting moment of today was kept until the end. Our cheerful van, filled with many nationalities, climbed a little higher towards the border with Syria.

On the way to this strategic point (the Golan heights) we passed a lot of barbed wire, signs marked “Attention: armored vehicles!” and of course some passing tanks.
As if this was the most peaceful place on earth, we stepped out as day trippers to gaze over an area only mere miles away. Syria.

Although everyone obviously had become a little bit nervous, there is absolutely nothing to be anxious about. Damascus is still some sixty kilometers away and they if it would’ve been really dangerous here, tourists wouldn’t be allowed… right?

A signpost shows us that we are 60 kilometers from Damascus and 800 km from Iraq. Behind us lies a large, deep bunker in case of emergency so that it can be used immediately. And then of course you still have the barbed wire…
A few hundred meters deeper you see Syria. The country looks peaceful. Dead quiet, with beautiful green plains and some farmers who are working.

While Sofia makes some pictures of me, we all heard a deafening bang. of course she stopped taking pictures right away and I turn around to see where the loud roar came from. We don’t see anything but we’re sure that there was a bomb, mine or some other horrible war equipment that went off.
UN peacekeepers who stood there, immediately started watching through their binoculars a little more nervous than they were just seconds ago. The cheerful tourists were suddenly all very quiet, but fortunately resumed laughing after a few minutes.

In just sixty kilometers from where we stood today, there was a terrible war raging. Man… I was so glad I was born in Europe and I only heard from all this terror on the news… People are no better than animals. It seems we have hardly evolved! 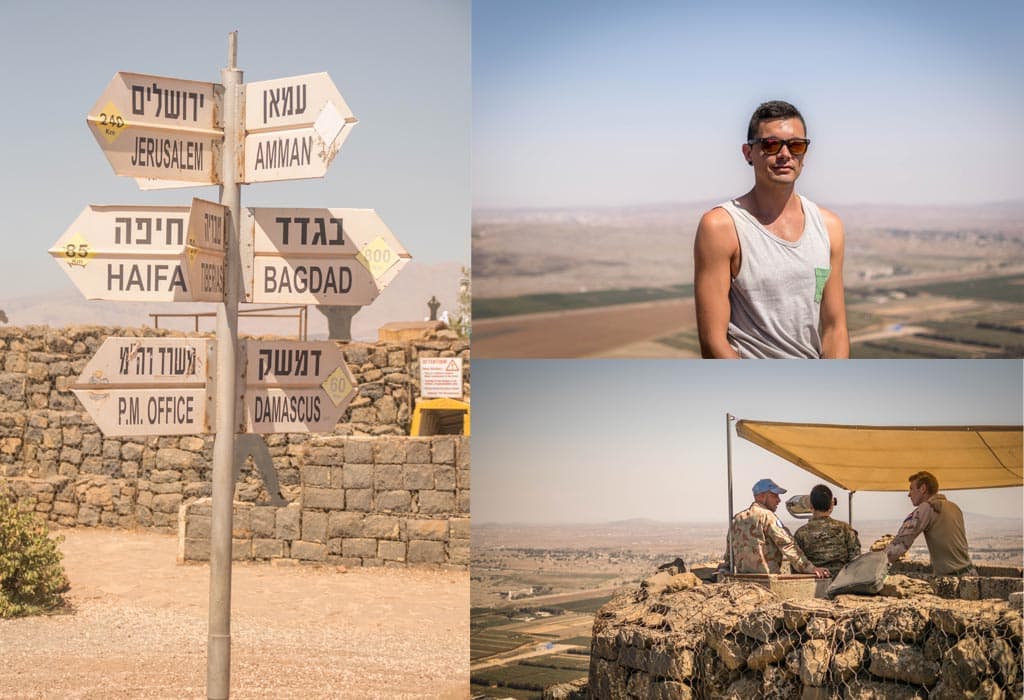 The Golan Heights is an area in Israel that borders with Syria.

After this surprising visit we had one extra spot to visit, so we could think about something else than the war just a little bit further.
We had one hour to plunge into the Sea of Galilee. This sea (actually it’s just a gigantic lake) was frequently used to baptize people to Christianity.
And … The Bible also talked about this place as the place where Jesus walked on water! Adventurous as we are, we naturally couldn’t resist… We tried and tried, but it didn’t seem to work… Or did it? We started using each other! One of us crouched down into the water, and another just stood on the back of this person. Et voilà! Cheating? Well no, just original thinking!

After laughing a lot -and in the meantime gulping up a lot of the fresh water of the lake- we went back to Nazareth, where tonight we all crawled under the covers quite early. Tomorrow we would head to Jordan. Exciting! 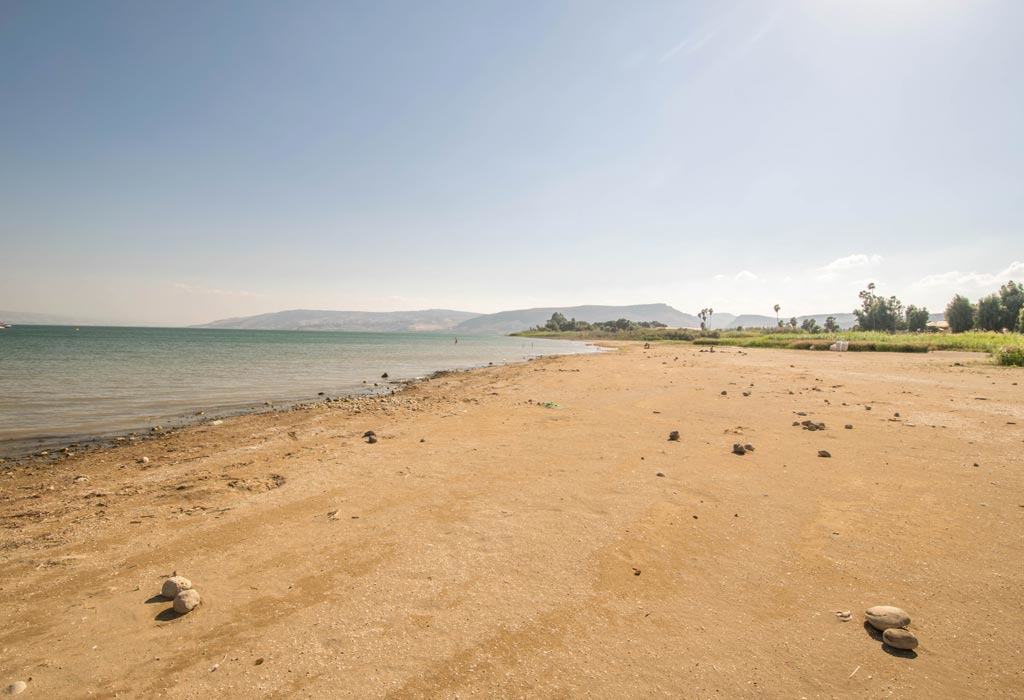 The sea of Galilee. Famous for baptizing many people and for Jezus walking on its water.