The Golden Circle in Iceland is a very popular route for tourists to visit. This 300 kilometer (185 miles) long car journey passes through many impressive sights that you should see when traveling in Iceland. In this practical guide, I will give you some good tips to plan the Golden Circle route yourself.

Tours to the Golden Circle:

Check out deals on GetYourGuide.

What sights do you see along the Golden Circle in Iceland?

With the many waterfalls, geysers and views of the beautiful national parks, the Golden Circle in Iceland is an ultimate tourist excursion for those who don’t have enough time to complete the Ring Road (which brings you all over the island). The route is in fact a loop that brings you from Reykjavik to some of the best natural points of interest from Iceland. On the way back you’ll see different sights. Although there are infinite many places you will want to stop, I will limit this list to the most popular ones.

The Golden Circle route starts in Reykjavik, and thus I can say that the capital is immediately the first attraction you will encounter while doing the Golden Circle in Iceland. Reykjavik may well be the very first thing you see in Iceland. Icelanders are hospitable people and will welcome you with open arms.
The city itself is full of contrasts. The one moment you will be in a metropolis, the other you’ll feel that you’re visiting a small fishing village at the sea. The city is often the decor for many big events. 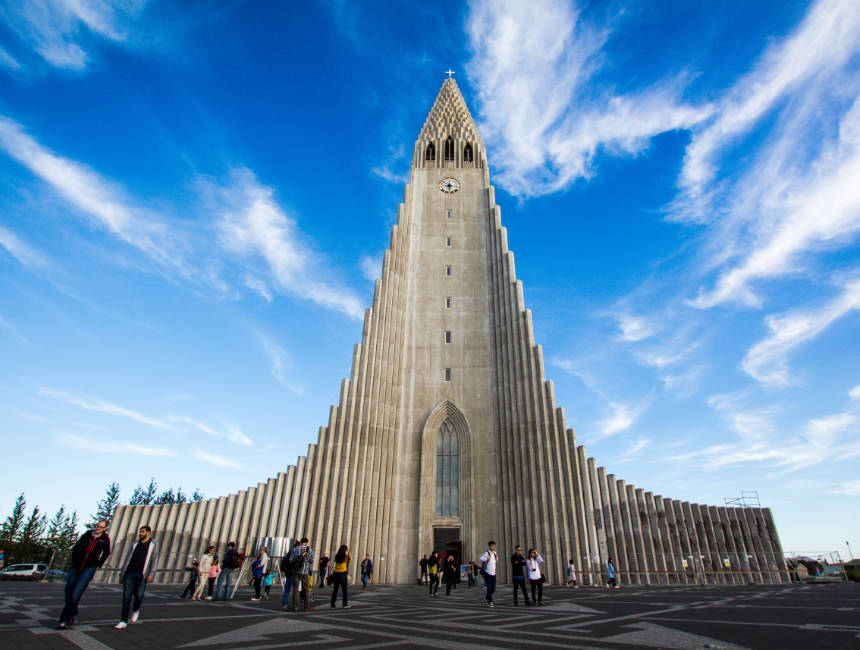 Reykjavik has quite some interesting sights as well! One of them is the gorgeous Hallgrimskirkja.

The Thingvellir National Park is an important place in the history of the country. It’s considered the first stop of the Golden Circle in Iceland, located about 45 minutes from Reykjavik. In addition, it has the honor to be the first of the three national parks in Iceland and it’s also the only one on the UNESCO World Heritage List. With lakes, waterfalls and natural formations it truly is beautiful, but the greatest attraction in this park may be the Silfra Gorge. The Silfra Gorge is a canyon between the North American and Eurasian continental plates and it’s the only place in the world where you can snorkel or dive between two continental plates. This is a real hot spot for divers! 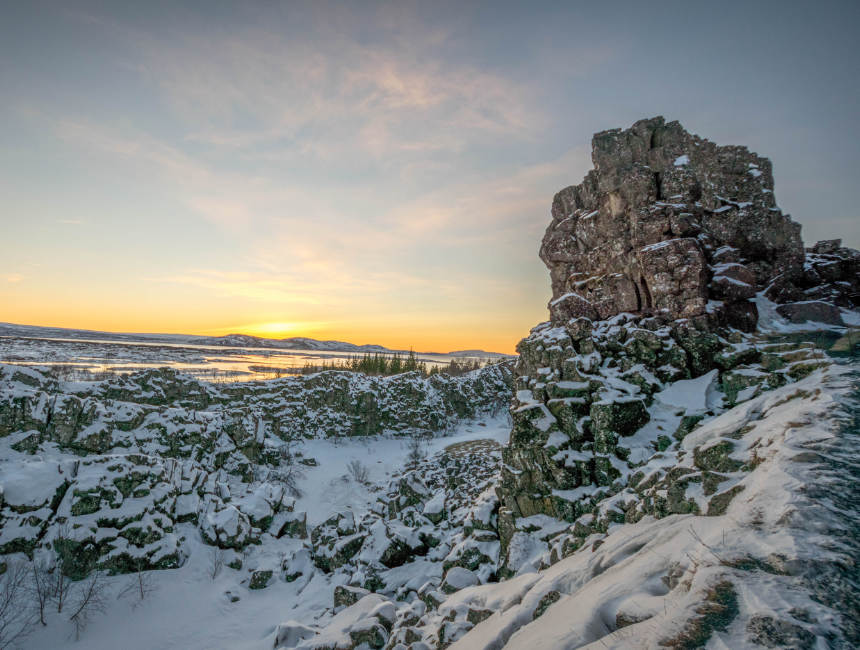 Thingvellir is located very close to Reykjavik. A first acquintance with the beautiful nature of Iceland.

Haukadalur is a geothermal area in Iceland about 60 kilometers (37 miles) further than the Thingvellir National Park. It’s considered to be one of the highlights of the Golden Circle route in Iceland. There are two famous geysers in this area, called Geysir and Strokkur. The term geyser even comes from mister ‘Geysir’ here. Boiling hot water that smells like rotten eggs is blown and steamed into the sky, it maybe sounds like a strange landmark, but it’s one of the most unique natural processes on earth. Strokkur is the only active one of the two geysers, but is very reliable in terms of eruption. Every eight to ten minutes you can witness the spectacle. 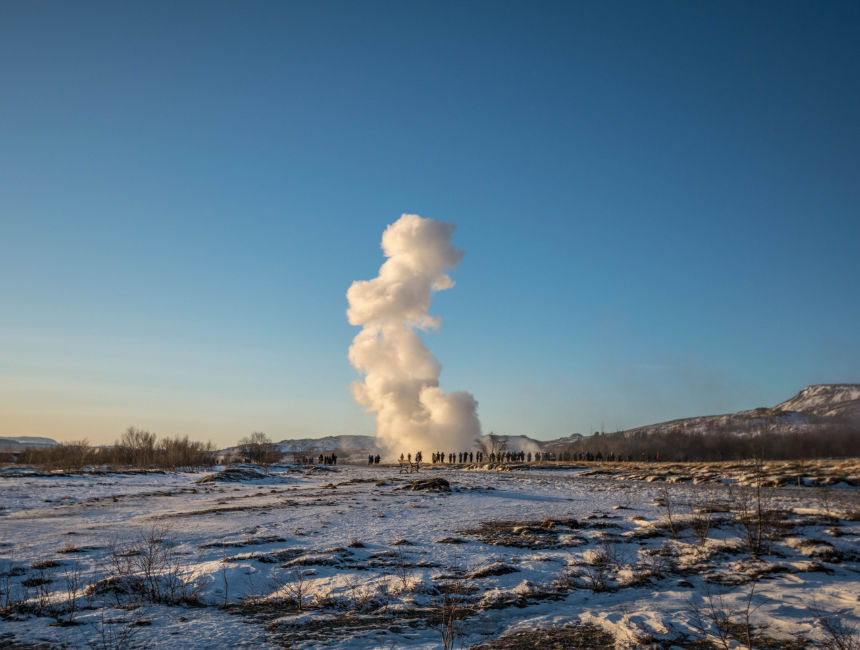 The Golden Circle in Iceland isn’t complete without viewing this impressive sight.

The Gulfoss waterfall is one of the most recognizable sights in Iceland and is also along the Golden Circle route. It’s about ten minutes driving from Geysir and one of the most impressive places to capture on a photo. The dramatic-looking Gullfoss waterfall, which collapses over a relatively short slope, is therefore the most visited tourist attraction of the country. The water falls down 32 meters (105 feet) and causes a heavy fog and perhaps even rainbows if you’re lucky. 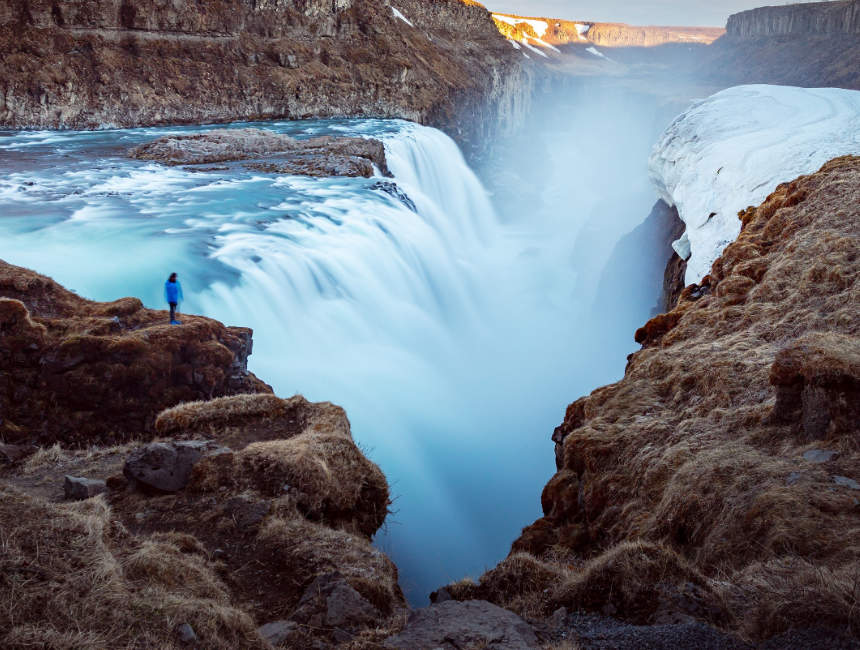 The most viewed sight of Iceland is this beautiful waterfall, also part of the Golden Circle tour.

The Kerid Crater Lake is an impressive remnant of a collapsed volcano. Especially the contrast of the red rock with the blue water makes this lake an exceptional sight. It’s the perfect place to have a little stroll, to the bottom of the crater. Don’t worry, the walk will take no more than five minutes. 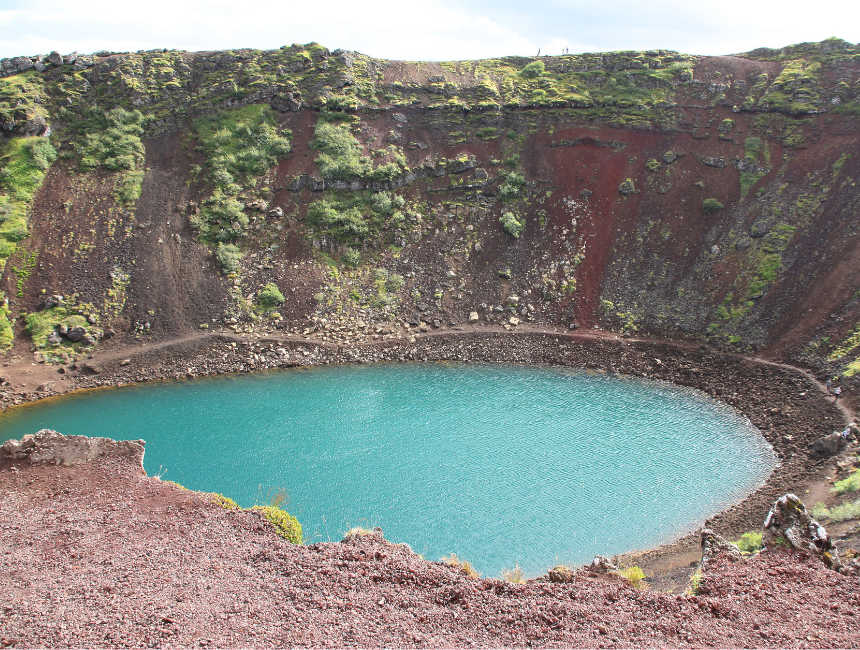 The Kerid Crater is often skipped in winter, because it just doesn’t look that impressive covered in snow…

How do you plan the Golden Circle route yourself?

Planning a drive on the Golden Circle of Iceland on your own may be a better option considering you have the freedom to stop where you want and take pictures as much as you like. Spend an hour of petting the Icelandic horses, or wait patiently for the perfect light to make the perfect photo of one of the sights.

The time when you make the Golden Circle roadtrip plays an important role in the total experience.
Summer months are the busiest period for a Golden Circle trip from Reykjavik. This season has the advantage that you don’t necessarily have to rent a jeep, unlike the winter months, when the roads are snowy and harder to ride on. However, keep in mind that during the winter months you get the chance to see the northern lights! The weather, however, will be very unpredictably. You can enjoy a blue sky, and experience a snowstorm only an hour later. Especially in spring you might meet all four seasons in one day.

Which car is best rented?

Driving the Golden Circle in Iceland is a good idea. But to get started, you’ll of course need a car fit for the task. In the summer months it’s not necessary to rent a four-wheel drive car. It migh be more interesting to rent a camper or a rental car with a tent on the roof. This way you can spend the night at the campsite of the Thingvellir National Park or at another piece of beautiful nature.

During the winter months, however, you will feel a lot safer with a four-wheel drive car. Especially when the roads get snowy and slippery and driving becomes harder. 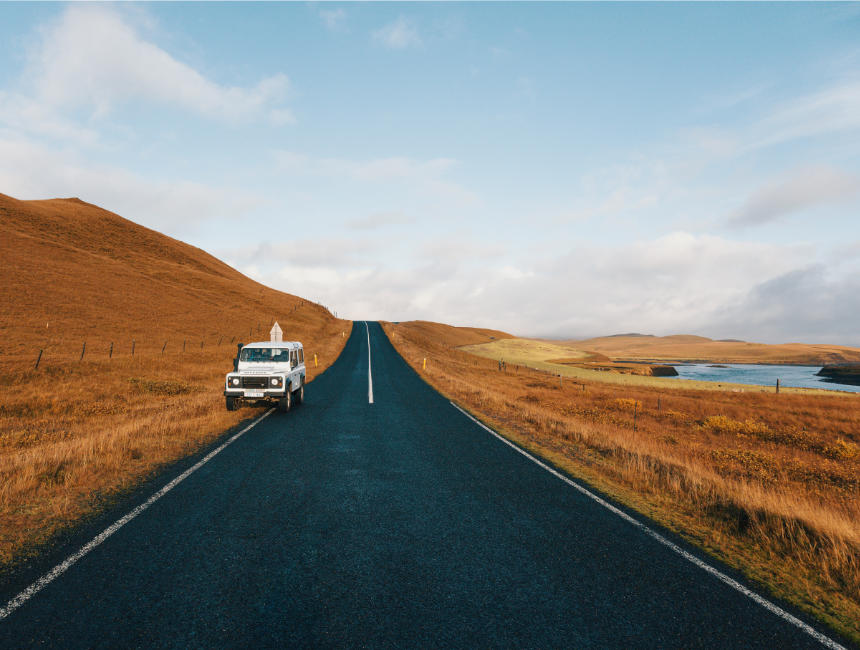 Depending on the season, a four-wheel drive might be your best bet!

The Golden Circle route can be visited in three to four hours. In reality, however, you will soon double that time. You of course need to stop at the highlights, take some pictures, and then there are of course still numerous of gorgeous landscapes you will pass during your roadtrip. Make sure that you take enough time to drive the entire Golden Circle in Iceland. Because you really don’t want to hurry when visiting. That’s after all the reason you’re driving yourself, right?

Another option is to leave from Reykjavik only in the afternoon, and do all the traveling by night. Given that in the summer it doesn’t get dark in Iceland, you can admire all the sights under the midnight sun. And you’ll probably also have all the sight for yourself! 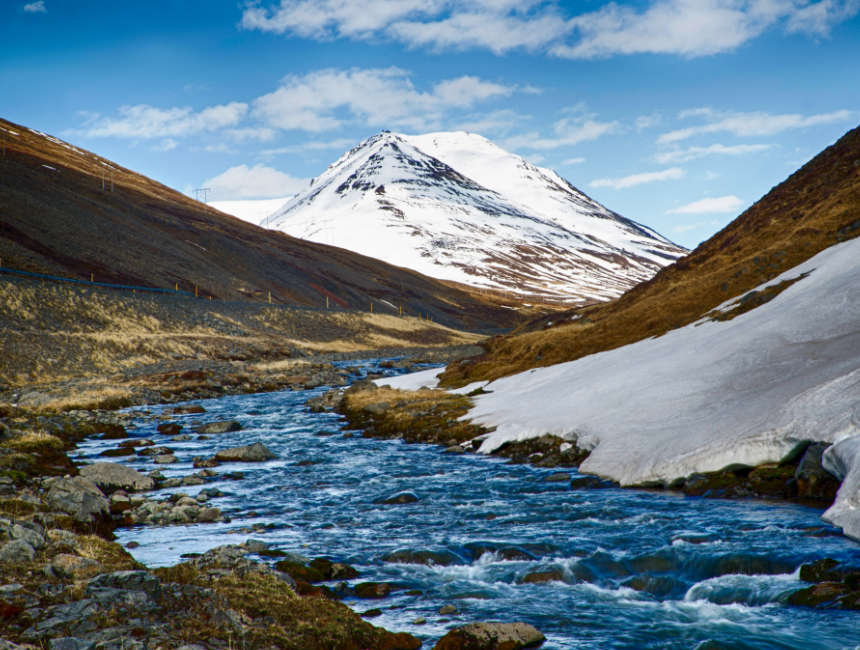 Whenever you go… A vacation to Iceland is always a good idea!

What tours are offered to do the Golden Circle in Iceland?

Forget the benefits I’ve listed to plan the Golden Circle by yourself. Sometimes you just want to relax and take a holiday without stressing out and having to plan everything on your own. To escape from all of this planning, a guided tour can offer the solution. Another great extra: you don’t even have to drive yourself!

Given that this is the most popular car route in Iceland, the range of tours is huge. There are dozens of different tour operators all organizing different excursions.

Visiting the Golden Circle in a car isn’t so appealing to everyone, so why not have a more exclusive visit? For example, you can take in the various sights of the Golden Circle by floating over them in a helicopter (1100 dollars / or a plane (300 dollars / 1 hour). If this is slightly above your travel budget, you can also choose to visit during the midnight sun (270 dollars / 8 hours). This tour is available from May to August and gives you the opportunity to complete the Golden Circle route in Iceland without having to meet hordes of other tourists. A standard tour during normal hours will only cost you 85 euros or  95 dollars per person and takes a full day.

Those who spend more than a day in Iceland can choose to combine the Golden Circle tour with other attractions in Iceland. For example, there are multi-day tours that take you to the glaciers and caves of Iceland after visiting the sights of the Golden Circle (€812 or $915 / 3 days or €1398 or $1565 / 5 days).
During the winter months you can even add a snowmobile excursion to see the magical northern lights (234 euro or 270 dollar). 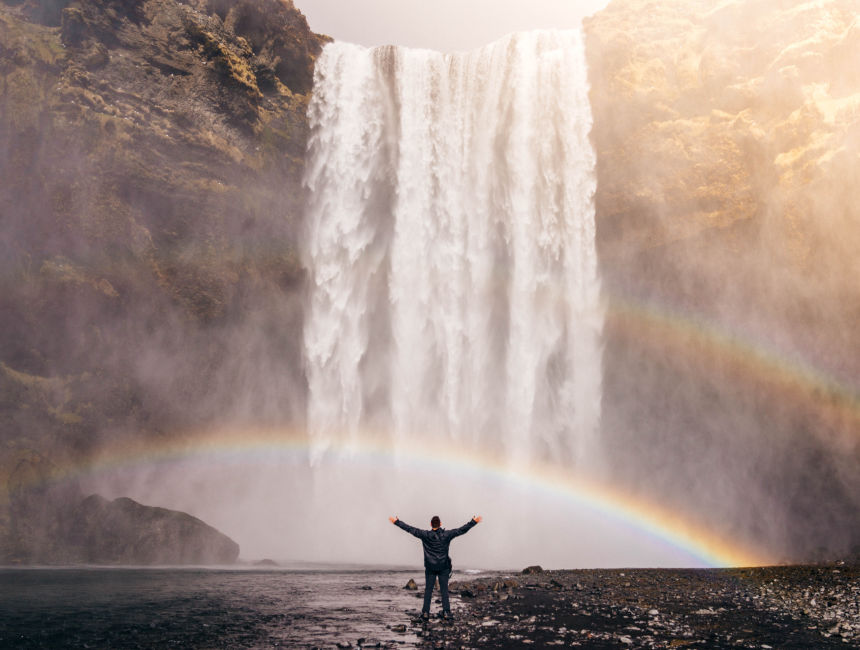 Stay a couple more days in Iceland! There is so much more to see than the Golden Circle alone!

Do you want to know what other excursions are offered in Iceland? Check out these deals:

» All tours and excursions to the Golden Circle

For more tours and excursions you can also browse on Viator.

Car hire in Iceland: tips, info and where to find cheap rental cars

Everything you need to know about the Jökulsárlón glacier lagoon