The hardest part of the day in this Norwegian town is when you need to wake up. From my cozy, warm bed it is horrible to put on all of my layers of clothing while shivering at the idea of marching through the snowy streets of Tromsø. Today we couldn't stay in bed for a lot longer, because at 08:45 am, we were already expected at the Radison Blu hotel in downtown Tromsø.
The Radison Blu and Scandiv Ishavshotel are located right in the center of town. From here just about all excursions that you can imagine depart. Searching quests for the whales, northern light adventures, snowmobile races and of course the husky safaris.
Since I loved the husky sledging last year in Tromsø, I just decided to do it again. This time with the barking quadrupeds of the Tromsø Villmarkssenter

When best to go?

During the winter months. The Villmarkssenter organizes a couple of excursions daily. During the day you get the best views over the wintery landscapes and during the evenings you get to see the beautiful northern lights!

All photo's of Tromsø 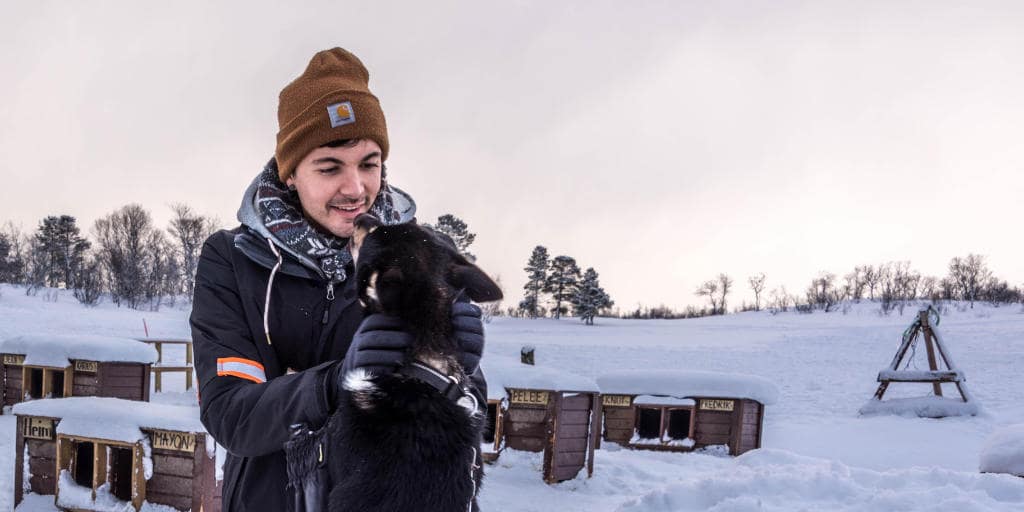 Who can resist these cuties anyway?!

Not only the several feet of snow, hills and whitewashed plants and trees made this area so beautiful. Behind the building where we had to sign up there were (!) 300 huskies who were obviously very excited about the new visitors.
Granted, it was not easy to resist the barking cries of these adorable dogs! But we had to contain our own excitement for a bit longer and hoist ourselves in extra warm clothing for our upcoming husky safari.

Anyone who wished got a lovely warm and waterproof suit, waterproof snow shoes, nice warm mittens and a scarf. In the hall next doors, we could change and leave valuables behind. 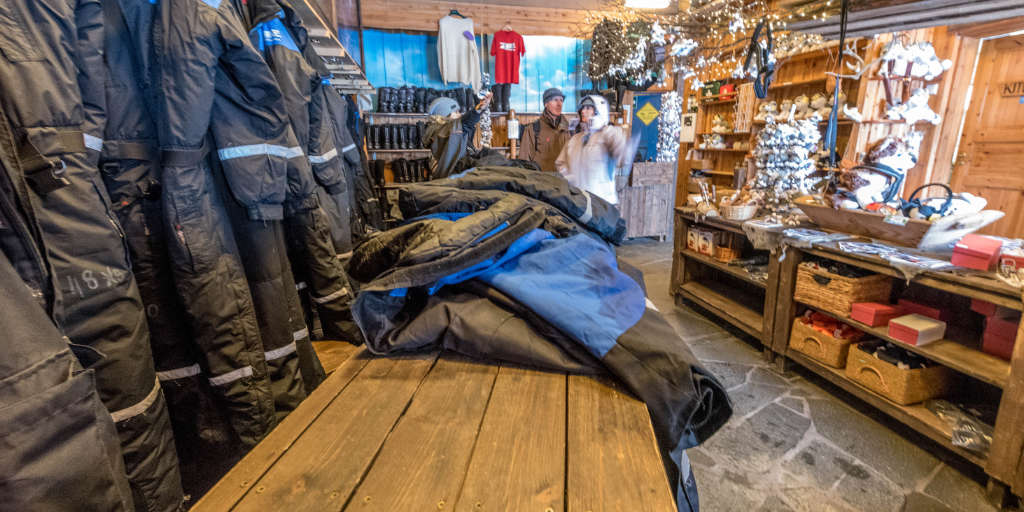 Scared that you will be cold when doing a husky safari? Don’t be! Warm clothes are offered free of charge!

It seemed like everyone started a game of ‘dress in the fastest’, because soon everyone was sprinting out to fall in love with the cute dogs.
A DJ set of barking, jumping and licking four-legged friends had impatiently waited for us around the corner.

Later in the day we would meet the dogs a little more personally, but now it was high time to begin this morning activity!

We could choose earlier if we wanted to take the reins in our own hands or if we would rather comfortably sit in the carriage and enjoy the beautiful scenery while being escorted around. 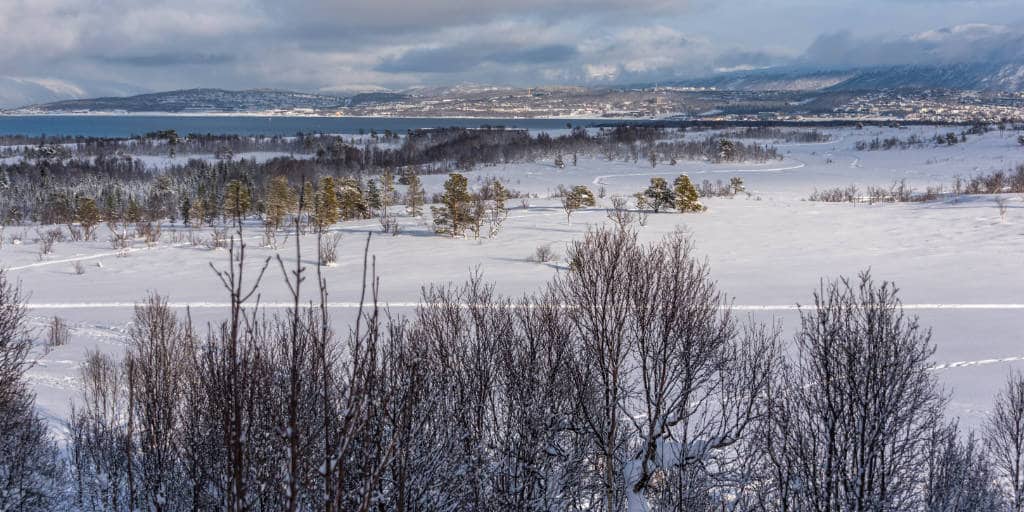 The huskies are of course the n° 1 attraction, but the gorgeous landscapes are sure worth some pictures as well!

My mother didn’t really like the idea of controlling the wildly enthusiastic dogs, so we decided that I would take that task on me. If you’re a bit adventurous you can not possibly say no to this wild ride!

After a short introduction and clear safety instructions, my mother climbed into the comfortable carriage and I moved behind.

“Make sure we don’t fall off!” My mother said even before the dogs began their race. As she said that, I had a flashback from last year. There it only took me ten minutes to flip the sled on its side, and the dogs just kept running with the dangerous sliding projectile. Oops!

The domain of the Villmarkssenter was less unpredictable and thus actually much more suitable for people who had never been running with huskies before. 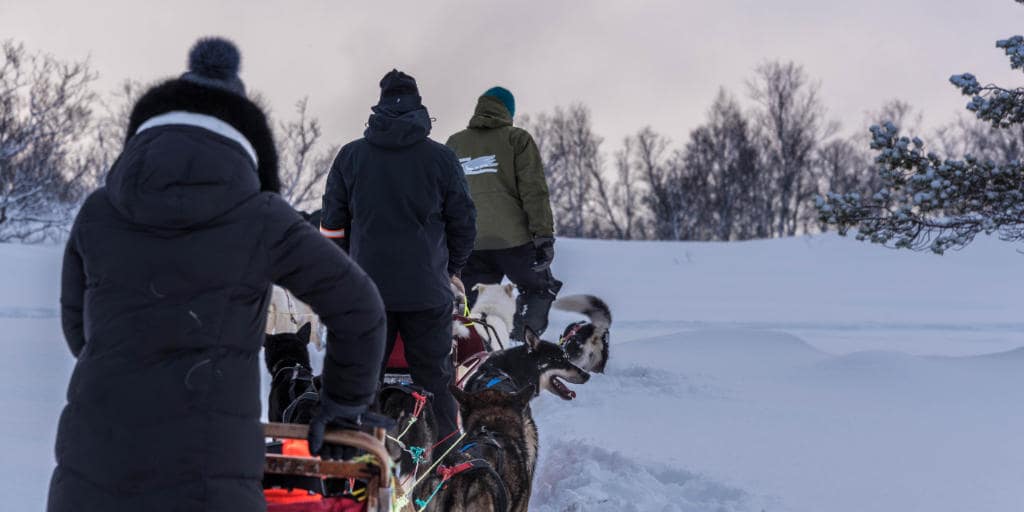 We had only just left or one of the middle dogs desperately needed to use the bathroom. The other dogs absolutely didn’t care, and while squatting and jumping the Alaskan husky deposited his brown package on the white surface. The view was pretty funny.

Once the turd was split in half by the moving sled, there arose a not so pleasant eau de toilette, and it repeated itself several times. But fortunately you don’t need your nose to also enjoy the views!
The bumpy ride with the boisterous doggies went up and down, and occasionally the dogs who pulled the sleds behind us came a little too close.
Logical really, because it’s not always easy to keep the sleds controlled when you can see so many beautiful things around you. 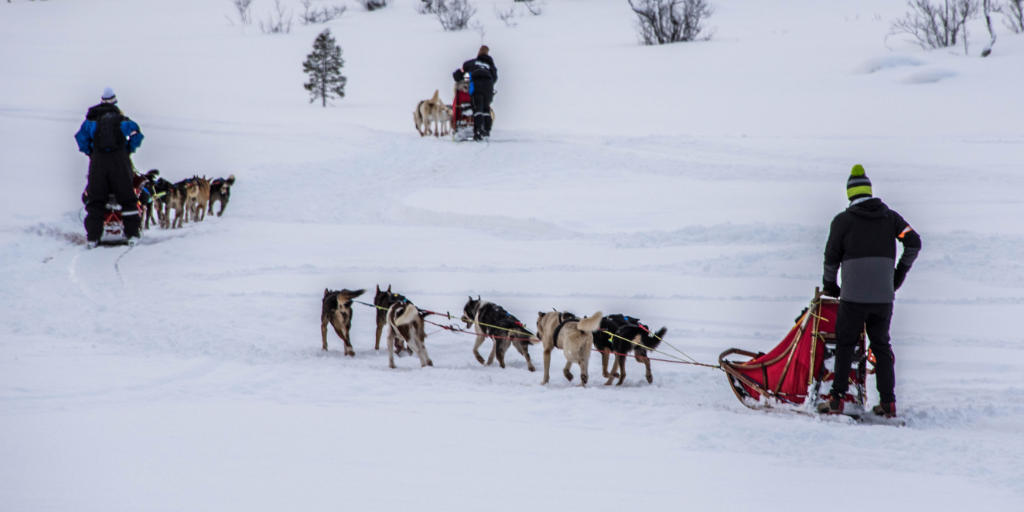 A husky safari is addictive!

When the area went downhill it got the most difficult, because the carriage started to go a lot faster, which also made the huskies go in overdrive. Between my legs there was a useful brake which I could jump on with my feet to control the pace. But sometimes the dogs didn’t fancy to slow down and they continued to pull, even if the brake was pinned deep in the white snow.

The trail itself was well engraved into the dog’s brain, because not once they went off the track. 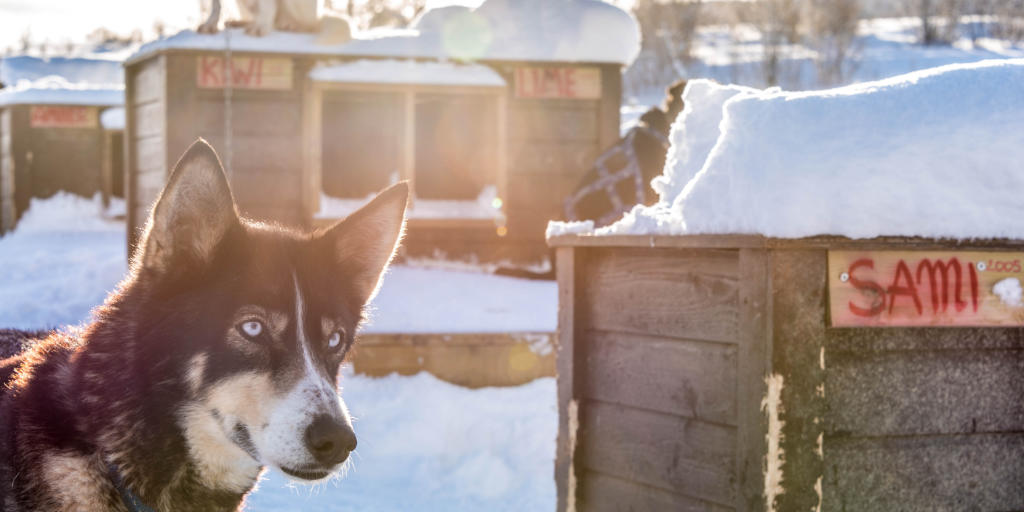 After a journey full of turns and bumps, hills and descents our strong dogs brought us back to their brothers and sisters.

Once everyone had arrived, we were met by a member of the camp. The friendly Italian girl explained us more about the huskies and their training as we walked between the wooden dog houses (while regularly staying behind to cuddle one of the cute dogs, of course).

The dogs are trained so that they are soon strong enough to pull the sleds. At the same time they should also be sweet and dependent, so they don’t mind all the strangers that visit this place every day.

After we had been introduced to some of the dogs and had asked all of our questions, our guide had one last surprise for us. In addition to the hundreds of dog houses with names like Twitter and Facebook there was one bigger cage. 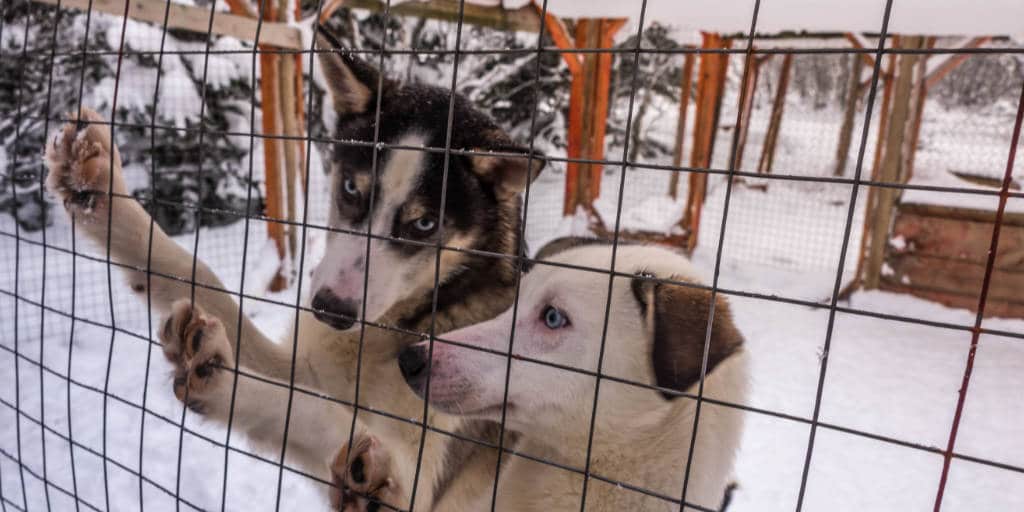 The biggest puppies need to learn a lot before they are ready to pull the visitors!

This was where all the puppies stayed, she said.
Anyone who wasn’t paying as much attention to her while playing with the dogs, quickly came closer to listen what was about to happen.

In the big closed-off cage there were puppies from a few months old, but one of the smaller pens even had some doggies of just a few weeks old!

The older puppies had to learn how to obey and at the same time they needed to become familiar with strangers. So we were encouraged to help a little with their training. We could all ask them to sit down, and if they did they got a delicious treat.
It was clear that these dogs had a lot of work to do, because it was only rarely that one listened well. But this could also be simply because many visitors didn’t take their training so serious and just threw the treats down whenever the puppies showed their cute puppy eyes… Oops!

When the concentration of the pups had clearly vanished, the guide went into a smaller cage and opened the house where some of the younger puppies rested. 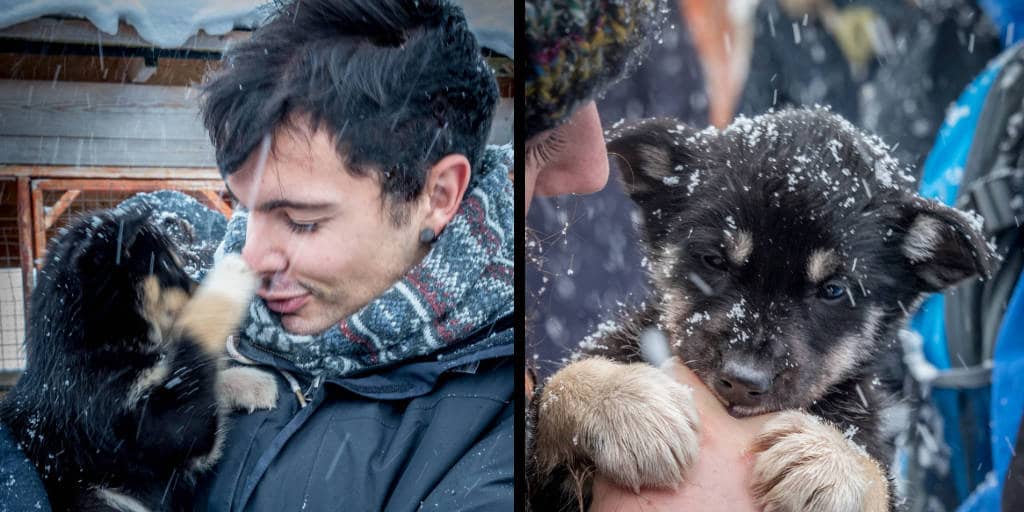 “Oh!” – “Ah!” – “So cute!” you can probably already imagine. The cuteness level went up even more and everyone began to think spontaneously to smuggle one of the furry puppies out of the pen.

When the smallest dogs appeared, everyone fell in love. The baby dogs could easily fit into two hands, and everyone of course wanted to hug one for a little bit. 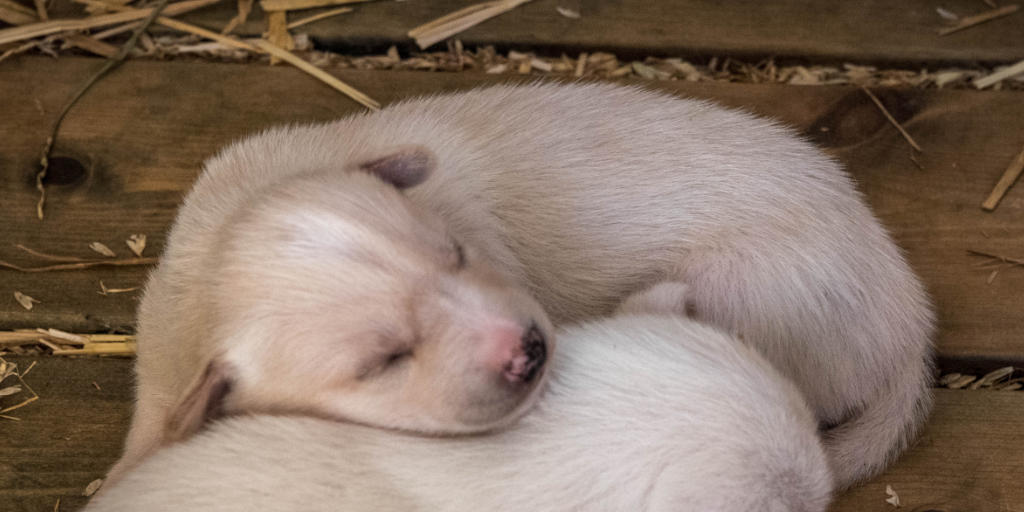 The smallest dogs of the Villmarkssenter! Only a couple of days old!

After a heartbreaking farewell to these cute, sweet, cuddly cuties, we returned them back to their mother and in the meantime we could catch a glimpse of a few days old puppies which lay dozing in the cage next doors. Unbelievable… But they were probably even cuter!

OK. Enough now about the puppies, because now I’m starting to regret that I didn’t put one in my backpack after all. 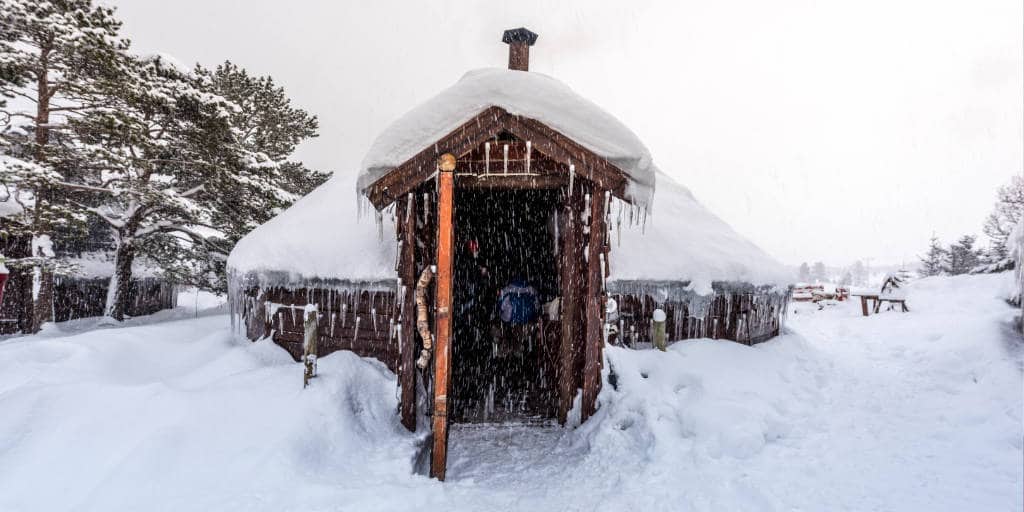 Snow storm! Quick, let’s hide and warm up with some delicious reindeer soup and hot drinks!

After the dramatic farewell scene that Shakespeare himself could not write, we left the dogs alone (for now). Our stomachs started growling too loud to ignore!

In one of the large wooden huts, decorated with sharp icicles, we were allowed to settle comfortably in front of an open fire.

While all of the adventurous people slowly warmed themselves back up, we got delicious reindeer and vegetable soups. As you may have read in my other articles, I find reindeer absolutely delicious. And I hadn’t yet tried a reindeer soup, so I was again pleasantly surprised! 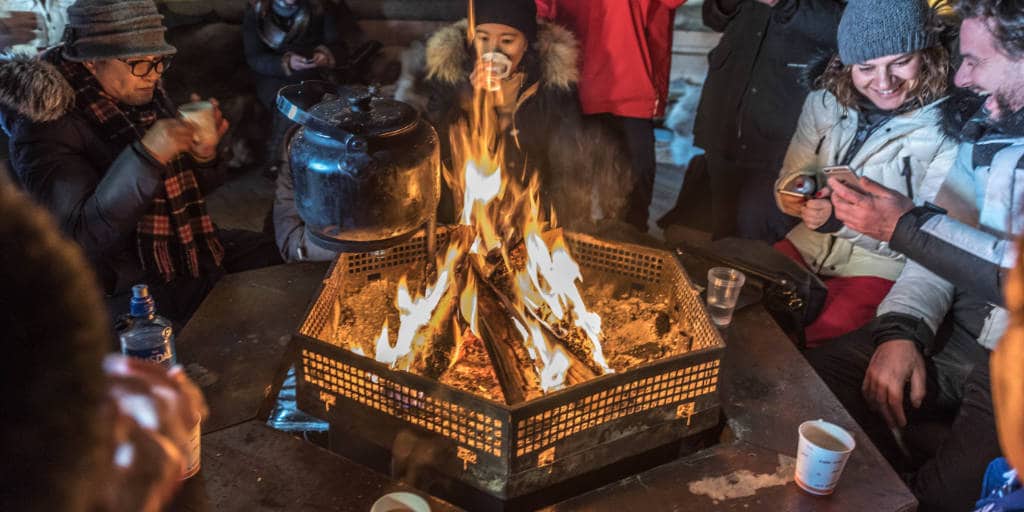 After facing freezing temperatures an open fire is more than welcome!

After I also finished a second plate (cuddling all those doggies can be exhausting!) I went outside to explore some more of the beautiful landscapes of Tromsø.

Meanwhile, the whole domain was covered in the golden glow of the sun, slowly going under.

With the new orange background, the polar landscapes actually got even more beautiful!

Below the camp there was a big snow plain where some reindeer were grazing. The animals were nervous as I came closer -just like me, because their antlers really look scary!- but once I stood there for a while, they seemed to no longer see me as a threat.

The beautiful animals were grazing on dried moss or what they could still fund under the thick layers of snow. 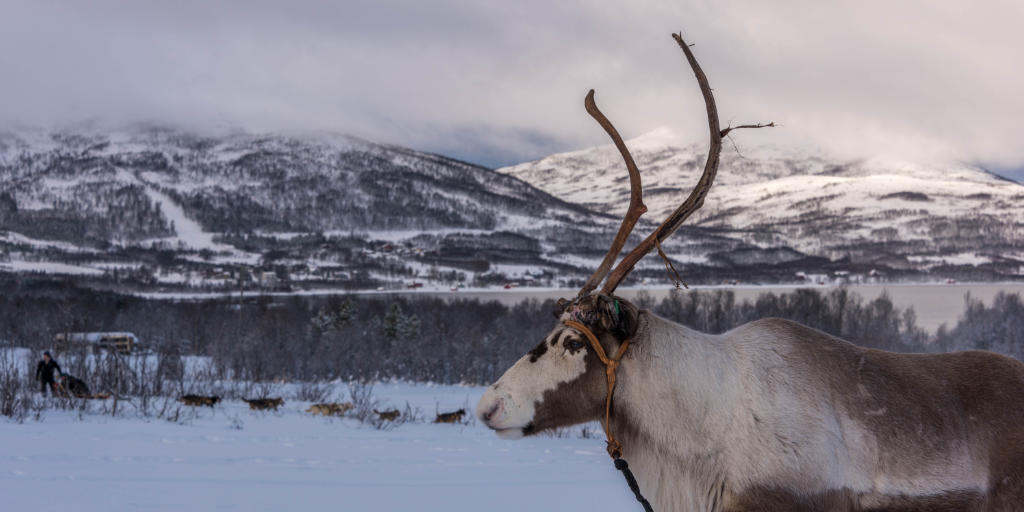 What a beauties! Do you also see the huskies sprinting in the back?

Just as I decided to return to the camp, I saw some huskies racing past behind reindeer.

What a magical feeling! Being so far north and enjoying all this natural beauty!

My mother and I boarded the bus, tired but satisfied. The low-hanging sun gave us a gorgeous scenery during our ride back. A perfect ending for our last day in Tromsø!