We had just seen the amazing Petra and our group was now heading back to Israel. Almost right near the border with Jordan lies Jerusalem. And one of the holiest cities in the world is of course worth a visit... 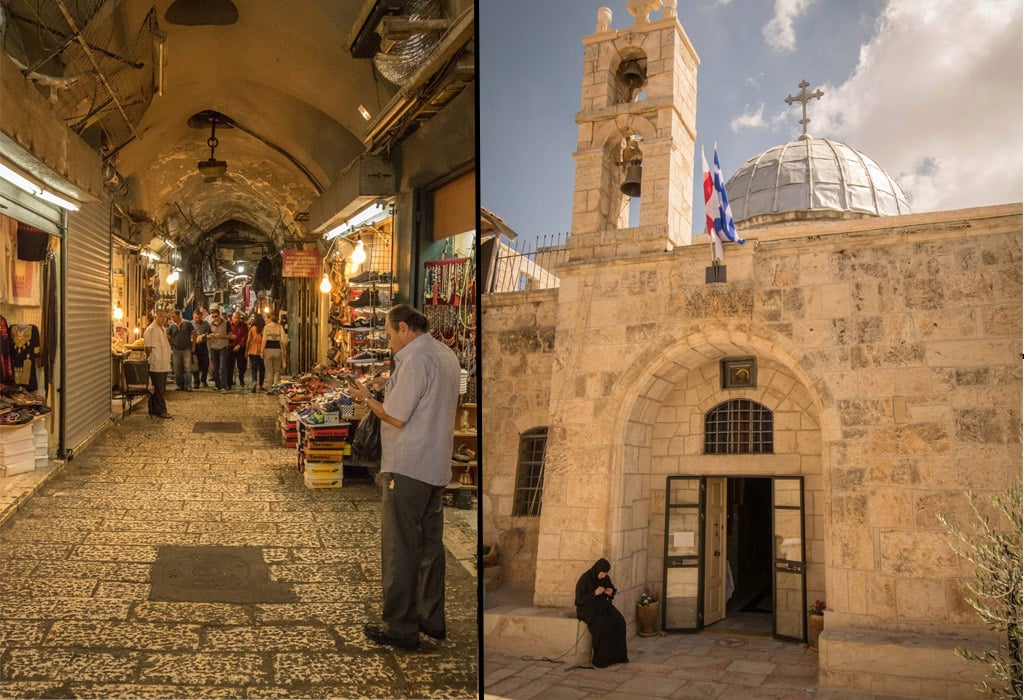 Some shots I made while walking through the streets of ancient Jerusalem.

It was about a three hour drive with a mandatory pit stop at a souvenir shop before we arrived at the Allenby Bridge border crossing.

All this time everything went fairly smooth and after just a little longer than an hour, the whole group was allowed back in to Israel. Well, Israel is actually wrong. For the Allenby Bridge Crossing (or King Hussein Crossing) actually borders directly on Palestinian territory. The border controls are rigorous and quite scary since dangerous looking macho types keep their massive guns clearly visible to anyone who passes.

After our bus is checked for bombs or other dangerous war gear, we drive through a small, quite shallow pool ( “That’s to drown refugees.” Says an American -. “No, just to get rid of the dust of Jordan, we are back in civilization, you know! ” the guide jokes.) and so we set sail to the holy city of many religions.

Our cheerful driver speeds us to Jerusalem in just over an hour.
“For a beautiful view over Jerusalem, look at your left in 3… 2… 1.”

Wow. It had become very dark outside and on our left we could see the gigantic golden Dome of the Rock, along with thousands of lights that illuminated the beautiful city. The large sandstone ramparts shows the greatness of this important city.

Not much later we arrive at our destination. This time I stay at the Abraham Hostel, about twenty minutes walking from the historic city center.

It’s late and I don’t think we still had the energy to really do much sightseeing. But we wanted to do something else instead… Oscar and I decide to get something to eat, something to drink and… Well we got a little drunk together with the other people from Costa Rica.

To me, Jerusalem seemed like an archaic and strict city, but once you see the young crowd standing on the streets –happy dancing, drinking and partying– I have to change that opinion. Just as Tel Aviv, Jerusalem is also a bustling city full of young talent and modern ideas. Except for the historical center, perhaps. 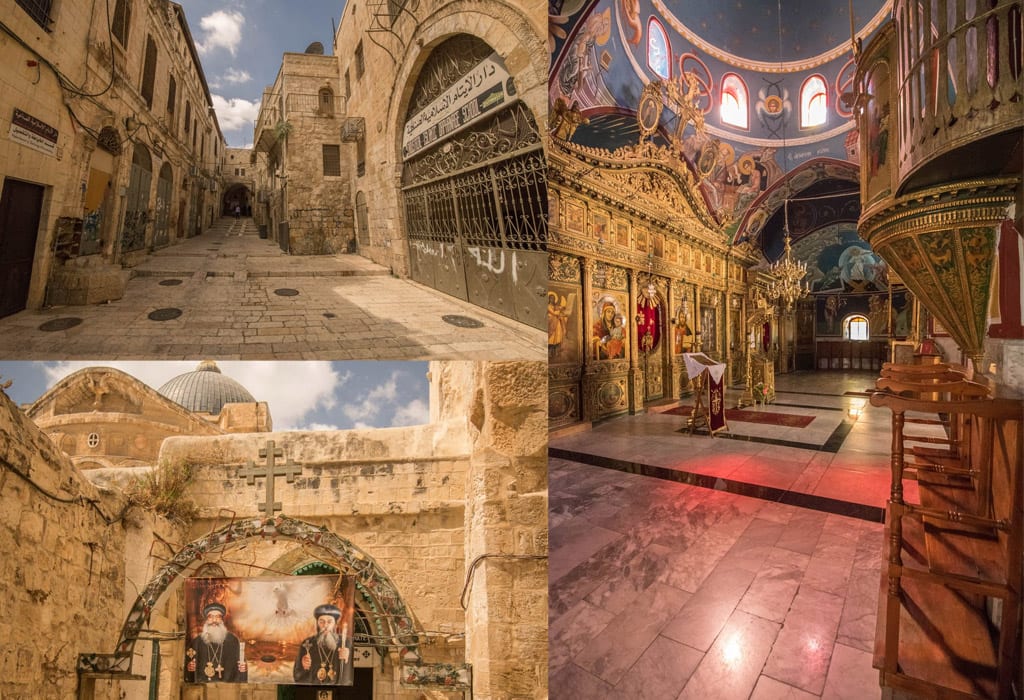 Spread out over the (old) city of Jerusalem, you’ll see quite some magnificent buildings, temples and streets.

Fortunately, the tours were over and we could now discover the city on ourselves. That meant that we I could finally catch up on some sleep.
At 10 AM I stretched myself for the last time, and jumped out of my bed. Together with my latino friends, my camera, and a dust free face we walked to the center of ‘ancient Jerusalem’ where we took a free guided tour.

If I’m honest I don’t think the free tour was particularly interesting. There were far too many people who took this tour, so most of the times you could barely understand what the guide told us.
Yet we also saw some places that we otherwise might not have seen.
The guide took us through the small, narrow alleys and covered streets of this historic city. Some of the streets actually reminded me a little bit of Dubrovnik.
Pretty much everywhere you could see hundreds of small and large shops and stands with their souvenirs, spicy fragrant spices, rugs and other items for sale. The tiny streets were alternated by open squares, and depending on the amount of people who were there you could know if it was an important landmark or not.

The city twisted and turned in all directions, and with the many steps you are sure to wind up in one of the four quarters sooner or later. Our American guide, that we barely understood, brought us to the Islamic, Jewish, Armenian and Christian neighborhood where you could clearly see a difference in customs and culture.

After the tour we went to eat a delicious shwarma sandwich in a restaurant that was recommended by the guide. Since we all were a little tired from the night before, we decided to just take it easy today. Most parts of the Islamic district were closed on Friday and Saturday, and the dome was therefore not accessible for non-muslims.

We all returned to the hostel to catch some of our lost sleep. Tonight -friday- the Sabbath began. And for this show in Jerusalem, we wanted to make sure we were well rested! 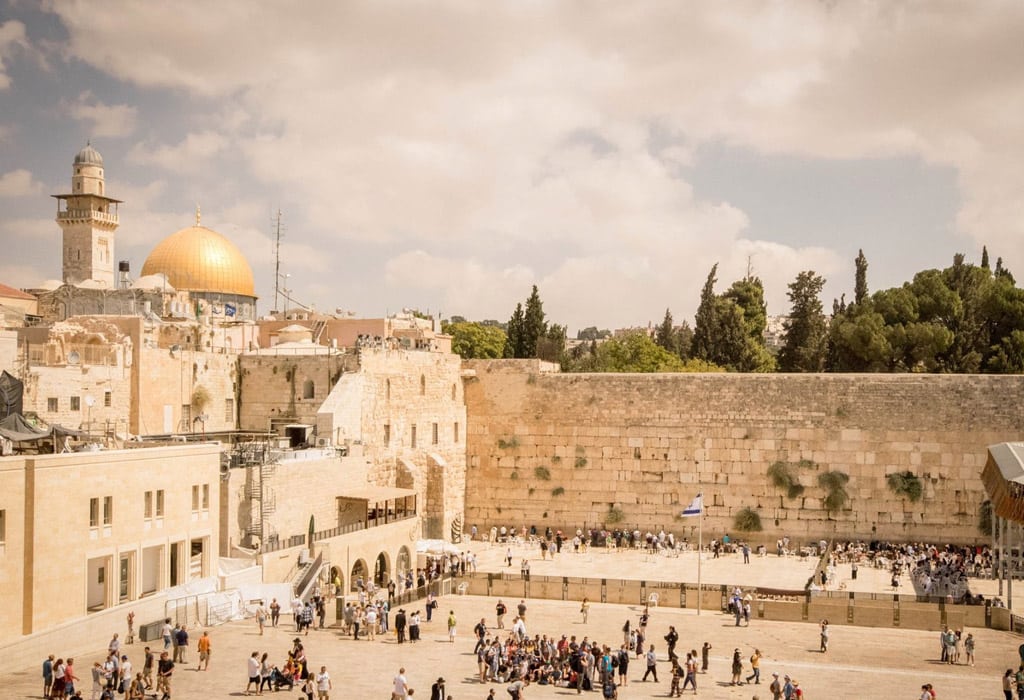 Jerusalem as seen from above. Here you can see the Wailing Wall and a little in the back the Dome of the Rock.

The Sabbath in Jerusalem

Two hours of sleep after a blasphemous night of going out can do wonders!
I felt as if I had just been revived and I was ready to go and take part of this Jewish holiday.

Along with Oscar and Sofia, we decided to leave for the Jewish quarter at five o’clock. Around six, the Shabbat began and it was celebrated heavily near the western wall.
The Shabbat is a weekly recurring holiday of the Jewish community in which they must abstain from labor.

After a brief check –going through a metal detector, taking everything out of your pockets– we were allowed to visit the heart of the Jewish quarter; the Wailing Wall.

Large groups of Jews and tourists entered the sacred ground where this important monument was built. In order for someone to gain access behind the fences, you have to wear a yarmulke or kippah (men only). Fortunately there are a few bins containing ‘disposable kippahs’ available for the tourists.

Oscar and I went to the left, while Sofia and Carmen went to the much smaller area for the women to the right.

At the men’s side you mainly saw the very orthodox Jews, wearing large hats, long beards and sideburns. The rest of this open area looked less orthodox, although all men still arrived in beautiful costumes to put their religion into the spotlights.

A lot of men were leaning over at the Wailing Wall and put notes in the many cavities of the sandstone walls.
Others sat on a chair to read the Torah or pray with their entire body rocking back and forth.

The later it got in the evening, the more Jews that flocked into this area and the less space you got. The reading of the Torah, the prayers and the hymn got louder and eventually it seemed like a real party that started.

Men with yarmulke’s and big hats put their arms around each other, formed circles and began to sing in chorus as they danced.
Not everyone seemed to be at ease, because there were plenty of men (and women!) who were carrying guns or other weapons. You could see clearly that the Jewish community is still one that is scared…

A few meters from the Wailing Wall, behind a fence, you got a nice overview over the scene. Taking pictures or using your mobile phone was forbidden during the Sabbath, but everyone –I plead guilty as well!- nevertheless tried to snap some pics or videos from the devout Jews, sometimes warned by an aggressive person who didn’t want anyone to use their phones.

What a wonderful evening. The beautiful city was submerged in the light of the full moon, the magnificent golden dome was clearly visible and the cheerful song of the Jews was heard hundreds of meters further out of town.

Try to go to Jerusalem on a friday, when the Shabbat (Sabbath) is being held. A must do! 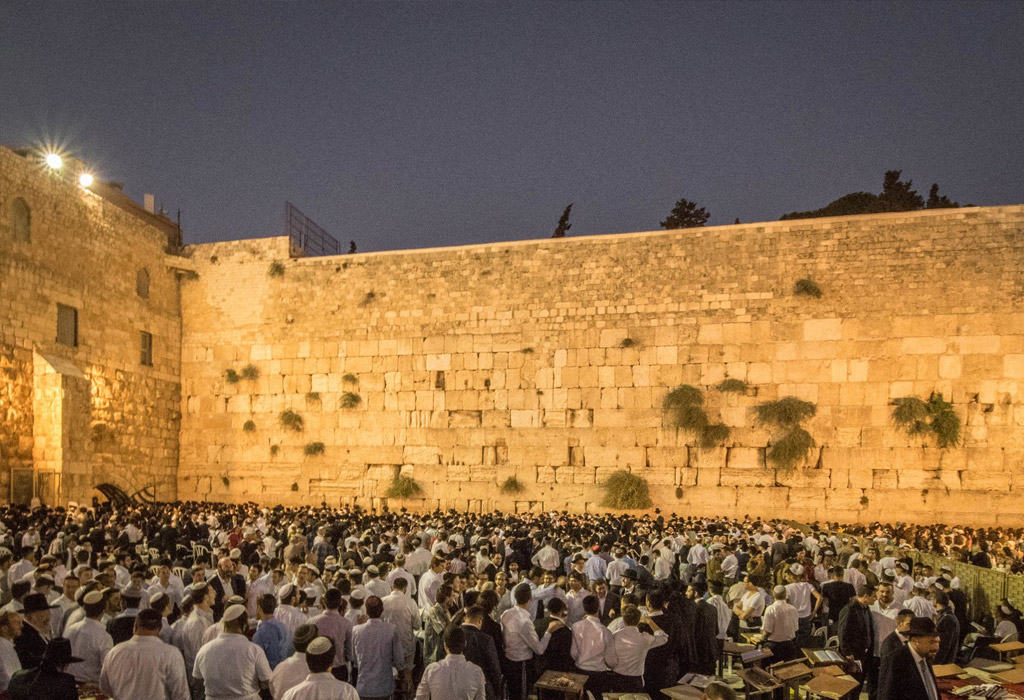 The later it gets, the more Jewish people come and celebrate at the western wall (wailing wall).