I had never heard of Siem Reap before. What I did hear of before, were the Angkor Wat temples. When I was little, I had seen them in the Tomb Raider movies. And then already I knew that I wanted to see them some day. Siem Reap is the most popular vacation destination in Cambodia and it is the second biggest city in the country. The road from the airport to the city center is surprisingly well maintained. Whenever you go a little to far out of the center, you'll see the real life in Siem Reap. Definitely worth the effort to rent a bike and cycle on the dusty dirt roads. Siem Reap is a top destination that everyone has to see!

A tuktuk in Siem Reap.

Stay – Hostels or budget accommodation is found everywhere in Siem Reap. Prices start at 5 euro’s, or 5$, and you get a comfie bed in a big dorm. You won’t spend a lot of money in Siem Reap, so why not pay a little more for some luxury? You can get your own room for only one or two euro’s more. Luxurious hotels and ressorts are in abundance in the beautiful Siem Reap. For two stars you will only pay nine to ten dollar. Three starts cost anyting in between ten and thirty dollar and four stars start at thirty dollar. The absolute best hotels with five stars can be booked for 80 to 165 dollars (€70 to €150).
A complete list of accommodation throughout Siem Reap is visible here.

Eat – The first day I was convinced that I found the cheapest meal ever (less than €5)! However, when friends took me with them the next day they showed me an even cheaper place. The cost was almost half of the first day!
A delicious meal with noodles or rice costs only two to three euro’s ($3 to $5,5). That is if you’re okay with eating from street stands. Try not to go too much in the city center. Places like Pub Street offer good and western food, but most of the times at steep prices. A five minute walk from Pub Street will give you cheaper food.

Transport – I didn’t see any form of public transportation in Siem Reap. The most used and widespread way of transportation is the tuktuk. Carried by a small scooter, the tuktuks squeeze themselves through pretty much every obstacle. A tuktuk is very cheap, but you need to negotiate prices beforehand. Otherwise, they’ll definitely charge too much. You can also talk to a tuktuk driver to take you to the temples for half a day or a full day. Depending on the driver, it will cost you between 10 and thirty dollar. However… A car with airconditioning can be a lot nicer if you don’t like being completely soaked after the first hour in the Cambodian heat.

A water buffalo grazing in the field.

Get out of the center – Siem Reap is very small. The touristic center is only a few streets more than ‘Pub Street’. This is where the most western-friendly places are and where the nightlife is. Prices for drinks and food can be triple or quadruple as much as a couple of hundred metres further down. Roam the streets to get the absolute cheapest (and good!) food.

Haggle – One thing that you have to do with every tuktuk drivers is haggling. “Ten dollars? No, no! Way too expensive! Five dollars!” Something like that. In many cases you can even get half of the price. Don’t overdo it though… The prices already are dirt cheap.

Don’t go to chains – Certain chains sound better in our ears because they give you a familiar feeling. Do know that most of these places are a lot more expensive. The Hard Rock Café, just outside the touristic part of the city, has nice parties and show but is very expensive.

Angkor Wat temples – A no-brainer of course. Going to Siem Reap is visiting the temples. One full day gives you the opportunity to see all of the temples for sure. Admittedly, it is very tiring. Especially because of the horrible heat. Try to go two full or half days. On one of the days you must see a sunset or sundown over the Angkor Wat temples. It is probably the most beautiful memory I have from Cambodia!

Tonle Sap – An activity that sounds appealing in the hot Cambodia: a refreshing boat tour on the Tonle Sap lake. Go see the stilt houses and watch how locals live on the lake and how they make their living from it. This particular lake is extremely important in Cambodia. In fact it is one of the most important food- and livelihood sources from the country.

Go party in pub street – Two, maybe three clubs pump up their jams as loud as possible. It might sound boring for people who are regulars in big clubs, but trust me: Pub Street is something you do not want to miss!

Hire a bike – Or take one from your accommodation. A lot of times, bikes are offered for free by your accommodation. Bikes are a great way to explore Siem Reap! I did the most beautiful discoveries while cycling around. Definitely go outside of the city a little, because that’s where I discovered most.
The dry and arid landscapes with the buffalo’s and oxen grazing in them are definitely worth the physical effort. Don’t bike too far out of the city during nights or evenings. Otherwise it is quite possible that hordes of guard dogs chase you down… Yes, I talk from personal experience.

Khmer dance shows – You don’t need to search long for these shows. In Pub Street you’ll see lots of little ads fluttering or flashing around. The apsara dances are beautiful and completely different of what I had seen so far.

The water festival – When the currents of the river turn around, it needs to be celebrated! On the last day of the full moon in October or November, a spectacular boat race is held. Three days long!

The entrance to the Angkor Wat temples.

Renting scooters – My personal opinion. From pretty much everyone who rent a scooter I heard they had abrasions and much worse because they didn’t listen to other people’s advice. These and some other horrible stories of backpackers who passed away because of an accident stopped me from renting a scooter. You really want to rent a scooter? Put on your helmet. You will see that nobody drives around with a helmet, because the police doesn’t fine them. Except for… Tourists.

Bedbugs – Cambodia is an extremely hot and moist country and thus it is the perfect location for bedbugs to thrive. These little bugs can turn your vacation into hell. They itch a lot more than mosquitos and they give you the appearance of someone with the bubonic plague. Definitely read some of the reviews before you book a hostel somewhere. Sometimes it is better to pay a couple of dollars more just to make sure you won’t be plagued by these little monsters.

No airco – Temperatures in Cambodja are pretty much always hot. A room with airco is definitely recommended if you want to have a good night’s rest. A fan does help too. A little. A very small amount. Not really. Just choose airco.

Rides on elephants – All around the Angkor Wat temples you will see majestic and beautiful elephants. Nice for tourists, but horrible for the animals. The animals rarely are able to rest, they almost get nothing to drink and the whole day they need to parade in the simmering heat. Besides, they also have a very heavy bench that they need to suffer all day including the weight of one or two tourists. Elephant can not carry heavy loads on their backs! They can carry one human in their neck, but that’s about it.

Did you even know that all the elephants you see there were brutally tortured when they were babies? How else would they become so obedient?
Please don’t support animal cruelty in Cambodia. The Angkor Wat temples are so much nicer to visit with the means of a tuktuk or even by walking.

Bayon temple in the Angkor complex. 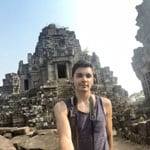 Siem Reap is one of my favourite destinations so far. The beautiful culture and history combined with the incredibly friendly people make Siem Reap an extraordinary travel destination!