Dubrovnik is a beautiful city and the producers of the Game of Thrones series noticed that too! In the TV-series, the city acts as Kingslanding. The city where the Lannister’s rule. Once you walked through the city gates it feels as if you walked back into the middle ages. The sand coloured walls, the white buildings with terracotta roofs and the very laid back atmosphere contribute to Dubrovnik being an extraordinary vacation location. Climb the thousands of steps and discover new alleys with cosy restaurants, hotels and shops. For an overview of the city it is best to climb all the way up to the walls or get into the cable car. Outside the old city there is not a lot to see in Dubrovnik, so try to focus your days in or around the old city center. There is plenty to see and do.

Outside the walled city of Dubrovnik.

Stay – Hostels are the cheapest place to stay in Dubrovnik. There are a lot of good hostels around the old city of Dubrovnik and because of the competition, pricing stays low. For only €15 ($16,5) a night you can get a bed in a dorm. If you need to pay more than 20 euro’s for one night, maybe start looking at private rooms, definitely if you are with two people. A double room only costs between 28 and 30 euros for a budget option ($31 to $33).

Luxurious hotels from four or more stars start at 100 euro, but can reach more than 300. Check out all accommodation in Dubrovnik on this page.
A place in or around the old city is in general most expensive.

Eat – Dubrovnik is the most well-known place in Croatia if you look at the travel brochures. This means also that it is very expensive compared to the rest of the country to eat here. After exploring the old city for a couple of hours, you are probably very hungry and moody. And then any food will do. So you will probably stay inside the old city. Expect to be charged between €17 and €20 for a main course and a drink from average quality. There are no real budget options around.

Outside the old city food can be a lot cheaper. Between ten and fifteen euro for a complete meal.

Public transportation – From the central bus station it’s a short drive to the old city. From the city center even shorter. You can walk it, but you’ll lose more than an hour. Moreover, the way to the walled city is very steep and can be very tiring. Especially when it’s hot!

Take your own lunch – Buy your lunch or some food in advance so that you don’t need to spend too much for not so great food in Dubrovnik. I noticed that it’s about 30 to 50% more expensive there than in the rest of Croatia.

View from the old city.

Old city – The (only) reason to justify a trip to Dubrovnik is to visit the old city. From the modern city this part is very easily accessed with public transportation. Walking is possible, but it will take you long and the way to the walled city is steep.

Walk the wall – An extraordinary sight over the city can be gotten by walking on the wall. You can walk around the whole wall. Excellent for photo’s, but most of all: one of the best things to do in Dubrovnik.

In the low season, you can’t always walk the wall. You can enter until 3 PM during off season.

Cable lift – A complete overview of the city you can get when you stand on one of the surrounding hills or mountains. If you get into Dubrovnik, go to your left and walk the many stairs. You’ll get to the cable lift soon enough. For €8 ($9) it takes you all to the top. A return ticket costs €14 ($15). At the top you’ll get a magnificent view over Dubrovnik and its surroundings.

Daytrips – There are many day trips that you can plan from Dubrovnik. Try to book well in advance so that they are not sold out.

Top attraction in Dubrovnik: walking over the old wall.

Late day trips – Dubrovnik is locate in the very east of Croatia. On about six hours from Split and about ten hours from Zagreb. If you plan on doing a day tour from Split, you’d better plan ten to twelve hours (go and back). A very early leave is recommended if you want to see most of the city. Also know that during low season a lot of the activities close earlier (walking the walls, the cable lift).

Forgetting your passport – To go to Dubrovnik, you need to go a little through Bosnia and Herzegovina. There, the bus will be stopped for ID checks. Don’t forget your ID or passport when going to Dubrovnik! Otherwise you have travelled all this time for nothing.

Visiting in low season – Especially when taking day trips, it is hard to visit the city in low season. The off peak season starts around november and ends in april/may.
Dubrovnik gets dark quite fast during this time, and so you’ll see less of the beauty of the city. However, the most annoying thing is that lots of attractions close earlier. 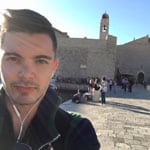 I was very surprised when I saw the vast, walled city of Dubrovnik. Everything is very well maintained and it felt just as if I was sucked into a time machine! Dubrovnik is an absolute top destination in Croatia!