One of the Ryanair airports in Croatia can be found in Zadar. This doesn't mean you just should land here and skip the city though, because the city itself is rather beautiful too. From the airport, a public bus will be waiting for people who want to go to the city center. There's only one other stop at the central bus station before you reach the old city of Zadar. Behind the little revealing walls you can find a city that mostly still has its ancient glory. Beautiful polished walkways and stately buildings from the middle ages. Once you navigated through the small alleys, you will notice the blue waters of Croatia's sea. A long stay in Zadar isn't necessary. But don't forget, there are plenty of day tours who will fill your days while in the city.

The Sun Salutation in Zadar.

Stay – For backpackers there are a couple of hostels in Zadar. The cost of these dorms is around €15 and €20 for a night ($16,5 to $22). Two person’s rooms or apartments aren’t much more expensive and a better option for couples or people who travel with two. This extra privacy you can already get for twenty-five euro.
Luxurious hotels and apartments cost between 110 and 120 euros a night.

Click here for an overview of holiday accommodations in Zadar.

Eat – The old city is the most touristy part of Zadar. The prices are a little more expensive here than in the rest of Zadar. In comparison to European or American standards, it still is quite cheap. Count on nine to fifteen euros ($10 to $16,5) for a meal in a great restaurant. An entree, main course and drink will cost you a little more. Not too much more though.
In the better restaurants you might spend a little more, but the food is absolutely delicious!

Transport – Public transportation is excellent in Zadar if you don’t need to go far. If you have half a day, you can just walk the city (old city + modern city). This way you’ll also see a lot more.
If you want to see another place in Croatia, I would suggest the bus services from the central bus station. To get there, you’d better take the public bus for a short trip. Walking is a little far.
From this bus station you can then take many trips to all of the major cities throughout Croatia for very cheap prices.

The fosa bay in Zadar, Croatia.

Stay outside the old city – Most of the time, a stay in the old city is more expensive than staying in the newer part of Zadar. On one to two kilometers outside of the old city, there are plenty of excellent places to stay for cheaper prices.

The modern part of Zadar.

Old city – The most charming part of Zadar is the old, walled city. It’s a lot smaller than Dubrovnik and Split, but definitely not boring. Enjoy the gorgeous Dalmatian see by sitting down at the charming quay.

Walk next to the water – From the old city you can make an appealing walk next to the Dalmatian sea. If you follow the path, it’ll lead you all the way back to the gate of the old city.
If you don’t have that much time, take one of the little boats that bring you to the other side of Zadar. From there, you can walk through the park, especially popular among locals during summer. You can even swim there.

Day tours – There are a lot of day tours from Zadar. Most of them are with boats, but there also are some surrounding cities or sights that are quite nice to see. The most boat tours to the surrounding islands can only be booked during high season, from May to September / October.

Plitvice lakes – A must do day trip from Zadar are the Plitvice lakes. This gorgeous nature park consists out of hundreds of small and huge waterfalls which flow into a mighty beautiful, azure lake that let’s you see the bottom.

The small streets and alleys of Zadar.

Staying to long – You can see Zadar in one day, definitely if you only want to see the old city. However, if you want to see the surrounding islands: stay a little longer! Otherwise; not necessary!

Land gate to the old center of Zadar. 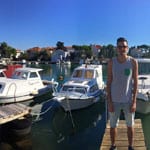 Zadar is a small city that's best done firstly if you plan to see the other coastal cities of Croatia. I did think that it had a lot of charm and a very appealing quay. From Zadar there are plenty of places you can visit.