The biggest international airport of Cyprus can be found in Larnaca. The city itself is quite big and looks a little like one big suburb for Nicosia. The nicest part of the city is the old city, where you'll find the Larnaca castle. The city is located in the center of Cyprus and is the best place to drive from one city to another. Nicosia, Limasol, Famagusta and Ayia Napa all are a forty-five minute drive from Larnaca. However, a short stay in Larnaca too is recommended.

Flamingo’s spend their winters in Larnaca.

Stay – In Larnaca there are plenty of hotels and most of them are pretty cheap. You can rent an apartment for less than thirty euros ($33) a night if your book a little in advance. Cheaper accommodation mostly is a little older. For modern places expect to pay about €35 or $39 a night for a double room. Which still is not very expensive.
Luxurious hotels cost between 100 and 180 euros a night ($110 to $200).
A complete list of accommodation and pricing in Larnaca can be found on this page.

Transport – The old city center of Larnaca is very easily walked. The most touristic part has an dike from about 1,5 kilometers (1 mile) and is easily done by foot.
Of course it always can be possible that you need to use public transportation. A single ticket for the local bus costs €1,5 ($2) or 75 cents ($1) for students.

If you want to go a little bit outside of Larnaca, there are plenty of day tours. But renting a car might even be cheaper. Especially when you’re planning on visiting multiple locations throughout Cyprus.

The castle of Larnaca.

Walk around – Don’t use public transportation too quickly. Most sights can easily be accessed by foot. The salt water lake where the flamingo’s are is a little harder to visit just by walking.

Pre-drinks – In Larnaca there are plenty of bars and clubs to unleash your inner party animal. Because there is a huge concentration of tourists (thanks to the airport) the clubs are excellent! If you want to go out but don’t want to spend too much money, just buy a couple of drinks in supermarkets. Even better would be to buy your drinks at the airport.
Drinks in clubs or bars cost about four / five euro ($5 to $6).

The many churches in Larnaca, Cyprus.

Watching the flamingo’s – From November to March, lots of graceful flamingo’s alight in Larnaca. The giant salt water lake is shallow enough to let the animals on stilts search for food. Don’t expect to pet one of the animals, once you come to close they start walking away or if your movements are quite fast they will fly away.

St. Lazarus church – This beautiful church dates back to the ninth century and is a Greek Orhodox church. The religious place is rumored to be built over the grave of Lazarus: the man who was brought back to life by Jezus. The Saint-Lazarus church is quite unique because it is a Byzantine church. Across Cyprus, there only are three of these Byzantine churches.

Larnaca castle – The castle of Larnaca is not to be missed. It is located at the end of the dike and towers over the many restaurants and shops in that area. Entering the castle only costs 2,5 euro ($3). On the top of this fort you have splendid views over the bay and you can make some selfies with the canons.

Aquaduct just outside the center of Larnaca.

Just visiting Larnaca – Larnaca is considered a connection city in Cyprus. Because of the central location you can easily travel from one place to another. In the city itself there are a couple of things to see, but to stay longer than one or two days… Not really.
If you plan to stay in Larnaca, just hire a car or book some day tours to the surrounding regions and sights.

Forget an English power outlet – Everywhere in Cyprus they use English power outlets. Buy the three pinned outlets in advance. That way you can charge your smartphones, laptops, tablets and camera’s so that you can take plenty of pictures to show back home. 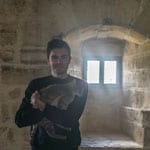 A short stop in Larnaca let's you see big troups of flamingo's! Nice to experience these big white and pink animals with in the background a gorgeous mosque. Go see some of the other cities or sights around Larnaca too. It's the perfect place to use as base for your exploring of Cyprus.