The last capital in the world that is divided by a border is Nicosia. After the fall of the Berlin wall, this wall still is in tact. The north part was occupied by Turkey, while the southern part of Cyprus is inhabited by Greek Cypriots and refugees out of the now Turkish Cypriot Republic. The sad history of Nicosia is definitely not beautiful, but it makes the city so much more interesting. Don't forget your passport or ID! From the center you can easily cross the border by foot, but you need to show your European ID or passport.
The two separate parts of the capital can't be more different. The Greek Cypriot part is a lot wealthier and more European oriented. The Turkish part is very poor and looks like an occupied army base.

Stay – Accommodation in Nicosia is most expensive of Cyprus. Luckily, it still is a lot cheaper than most European places, so real big costs won’t be made. When you visit in low season you can find accommodation starting at 30 to 35 euros ($33 to $39). If you don’t book well in advance, it will be a little more expensive.
For hotels with stars you will pay something between €55 to €150 a night ($60 to $165).

An overview of accommodation in Nicosia can be found here.

Eat – The capital of Cyprus has delicious restaurants throughout both parts of the city. The Turkish side is on average a little cheaper, but at the Greek side of the capital you have a much bigger choice of restaurants and bars who will literally let you go completely stuffed.

A rental car is another cheap option if you also want to drive across the border. Do keep in mind that you need to buy a Turkish insurance to explore the Turkish side of the island. For three days an insurance will cost you €25 ($27), for one week €35 ($40).

Building right next to the St. John’s church in Nicosia.

Don’t pay for parking spots – If you’ve rented a car in Cyprus, you’ll immediately notice that Cypriots don’t care about rules that much. Cars are parked everywhere and the police just doesn’t care. Instead of paying two to five euro for a parking spot you can drop your car on the sidewalk or wherever you feel comfortable.

Eat Cyprioti food – Musaka, mezze’s, kebab’s, … Are a lot cheaper than other dishes. And of course they are incredibly delicious!

Crossing borders – Definitely cross the border. You don’t need a car to cross borders, because there’s a border crossing point right in the center of the Greek Cypriot part of Nicosia. Both places can’t be more different from each other!
Try to get out of the walled city when you’re in the Turkish part of Nicosia. Outside of the walls you see what the true life of Turkish Cypriots must be like. It looks just like a refugee camp or an occupied warzone.

Kyrenia (Girne) – To get to Kyrenia (Called Girne in the Turkish part) you need to take the Agios Dometios crossing point with your car. It is very famous for its huge castle built as a lookout to see enemy ships coming.

The entrance for the fort costs €2,5 ($3) and easily keeps you in for a couple of hours. Walk on the giant walls to get a magnificent view over the bay and the city. The courtyard and dark halls are definitely worth a peak too.
In the castle there are multiple museums and exhibitions, and they are completely free. Definitely check out the ‘Shipwreck Museum’.

Büyük Han – After you’ve crossed the border it’s only a five minute walk to get to Büyük Han. An impressive building which is even more interesting once you enter it. Inside the building you can see some beautiful architecture with small shops and restaurants.

Selimiye Mosque – If you want to enter the mosque, you need to take off your shoes. If you’re scared that they will get stolen, take them with you inside and put them on the designated shelf.
The mosque used to be a church but was completely changed into a mosque.

St. Johns – From the outside it may just look like another Greek church, but inside it is just gorgeous. The whole church is painted with biblical scenes and the whole place is covered with gold and silverware. The kitschy church is really beautiful!
Watch out with taking pictures though, because the supervisor doesn’t like them at all and can get pretty angry if you do take some pictures.

Go a little outside the walls at the Turkish side – Inside the Turkish part of the city there is most to see in the beginning of the walled city. Once you get further there is a lot less to see, except for right outside the walls. This area looks like a refugee camp. Scary but yet incredibly interesting!

Dine in “Piatsa Gourounaki” – Authentic, Cypriot food out of the hands of the best chef in Cyprus! And this for incredibly low prices. Ask for the meat or chicken platter for two persons and stuff yourself completely.
The complete platter only costs you €18 ($20) or €9 ($10) a person.

Making a reservation is a good idea, because otherwise you’ll probably spend thirty minutes to an hour before you get a spot.

Choose a side – Avoid picking the Greek or Turkish side if you talk about the parting of Cyprus. The question is still very fresh in the minds of most Cypriots and most of them juste hate each other.

Forget your English plug – In Cyprus people use the English power plugs with three pins. Definitely take a converter if you wish to charge all your electrical devices.

Taking pictures of the borders – If you do it, just make it quick. The army doesn’t like to be photographed and in some cases they even come to you to ask you to delete the pictures. 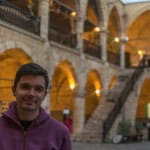