You can get to Paphos quite easily with Ryanair, a cheap budget airline in Europe. Paphos is a small coastal city which is located only about 20 kilometers (12,5 miles) from the airport. The city itself is a little outdated, but has some nice archeological excavations, castles and a great coastline. A long stay is not necessary, except for when you just want to have a relaxing vacation with beautiful beaches and azure beaches.
You'll never be alone in Paphos too! The hundreds of stray cats like to say hi in order to get some leftovers.

The castle of Paphos.

Stay – On only ten to twenty minutes from the airport there are plenty of hotels, apartments and other accommodations throughout Paphos. You pay a minimum of €25 ($28) for a not so luxurious hotel or apartment. You want some more luxury? These kind of accommodations cost between 80 and 150 euro a night ($88 to $165).
Check this page for a complete overview of accommodations in and around Paphos.

Eat – The food in Cyprus is not very expensive. At the coast, you’ll find plenty of eateries where you can stuff yourself for not even 10 euros ($11). Sometimes you even get an entree, main dish, dessert and a drink for this price. Don’t expect the quality will be amazing, but it isn’t bad either.
For quality food you won’t pay a lot more either. Expect to pay between twelve and twenty euros a night. Fish often is very good in Paphos.

Transport – The public transportation in and around Paphos is excellent. A single ride costs €1,5 or 75 cents if you’re a student. From the center you can get everywhere in at most forty-five minutes. Most places are a lot closer by though. All popular sights have their own bus stop.

Short visit – Paphos is one of the smaller cities in Cyprus. A long stay isn’t really necessary. Staying for a longer period of time is not necessary if you plan on seeing other cities too. One, maximum two days is more than enough.

Student cards – If you’re young enough to have a student card, you’d better use it as much as possible! Most of the time you’ll get 50% discounts at tourist places like archeological excavations, castles or tombs.

Tombs of the kings in Paphos.

Archeological excavations – Right next to the Castle of Paphos, there lays a huge domain which shows many excavations from centuries ago.  For some this might just be a pile of rubble, but in the past these were the actual houses of Greek and Roman bourgeoisie. Right below the lighthouse there is a beautiful amphitheatre.

Castle of Paphos – Not super special, but nice to go in and stand on the top of the castle to get the best view over Paphos possible.

Tombs of the Kings – Another big domain with all kinds of archeological excavations is only a five minutes drive from the touristic center. A couple of centuries ago, kings and nobility were put in these majestic graves once they had passed away. Not all of the tombs are in excellent state, but the further you go from the entrance, the better the graves become in my opinion.

Stroll along the coast – Don’t just stay in the tourist area, but go walk a a little further down the pier. This coastline is less changed by tourism and because of that a lot nicer to see.

Forgetting English plugs – In Cyprus they use English power plugs. Don’t forget to take one, or ideally, multiple English plugs with you. If you need to buy one, you’ll pay a lot for lousy quality.

Drive at the right side – Just like the English plugs is a remnant of the British colonisation, this too is a residue. Driving at the left hand side in Cyprus is a must. Paphos is the best airport to start learning to drive at the other side. The drive to Paphos is quite easy and without very busy roads. 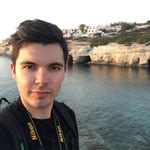 Paphos is a perfect base for when you want to explore more of Cyprus. Close to some of the country's best diving locations, great sights and activities and nice beaches. Perfect for everyone who doesn't want to trek around too much and just wants a relaxing vacation under the boiling Croatian sun.