Santo Domingo is the capital of the Dominican Republic. From most big cities there are direct flights to this city. Often the flight gets split in two: after reaching Santo Domingo, the plane goes further to Punta Cana. Expect a culture shock. Santo Domingo is what the Dominican Republic really looks like. Here, you won’t find paradise beaches and luxurious ressorts. The Zona Colonial is the touristic part, but outside of this part you’ll find mostly poor people living in their poor houses… However, it definitely is worth the visit!

Stay – Santo Domingo is a cheap place for most Western-Europeans and Americans. The cheapest place to stay are youth hostels. These cost between ten and twenty dollars a night.
You’ll never find the accommodation to be very expensive.

For a budget hotel where you do have a little privacy, you will pay between twenty and thirty dollars. For a little more luxury, expect to pay anything in between thirty-five and seventy euros / dollars.
Luxurious ressorts and hotels easily cost more than 100 euros or dollars.

Eat – Delicious food doesn’t need to be expensive. Local dishes are cheapest, but often you need to speak a little bit of Spanish to point out what exactly you want. Quite popular in Santo Domingo are the buffet style restaurants. Here you’ll find Dominican food like plantanes, fried chicken, rice and other delicacies. For a full plate you only will pay around $3 to $4.
If you prefer to buy some western food then you’ll need to pay a little more. Think of anything between ten and fifteen euros or dollars. Tipping isn’t necessary but is appreciated.
Besides the cost of food, you’ll find that there are a lot of extra taxes added when eating out.

Transport – Public transportation in Santo Domingo is pretty much non-existent. Or you take a lousy, almost blown-up taxi, or you take a guagua… Or you just take a cheap and comfortable uber car.
The guaguas are incredibly cheap, but to take them it’s better that you speak a little Spanish if you want to know where to go.

Guaguas are little busses that stop everywhere. You’ll recognise them quite easily, since they are chock-full of people (and sometimes animal) and they’ll drive by with open doors with someone hanging out to ask if you need to go to a certain location. Most of the time, these busses only cost 50 Dominican pesos (About 1 euro or 1,5 USD) for quite large distances.
Taxi’s are really expensive for tourists. Try to avoid them, because they ask way too much money of tourists. If you take a taxi, then it is absolutely necessary to talk about the price in advance.

My personal preference was to use Uber if I wanted to get somewhere. Uber is a smartphone app, where locals pick you up and drop you off with their own private cars.
Before you order an uber, you can make an estimate so that you know how much this particular drive will cost you. In Santo Domingo I never paid more than two euro’s ($2,2) for a short drive. Good to know is that all cars are checked before they can be part of Uber. That way, you can be certain that all the cars are modern. Unlike to taxis and guaguas…

You can download Uber here. If you use the discount code “lpwyzue” you will get your first drive with them absolutely free, as long as it stays under $20. To pay your driver, you need to have a credit card though. A good idea if you’re in the Dominican Republic anyway, because you can’t pay or get money from an ATM with your Maestro card.

A popular manner of transport among locals; the guagua.

Use uber or guaguas – The Dominican Republic is a cheap country, but the locals tend to cheat on touristst quite a lot. A taxi or motorcycle will cost you a lot of money. Especially when they see you’re a tourist and you don’t speak the language. Instead, use the guaguas (The local busses; expect a very Dominican experience!)

Still dirt cheap, but private, luxurious and faster is to make use of Uber. A smartphone app that has fixed prices per kilometer / mile you drive.

Don’t pay for tours – In Santo Domingo you can go visit certain sights with the help of touring companies. There’s pretty much endless possibilities; city tours, day tours to other regions, a visit to the Tres Ojos National Park, …

Most of these tours start at 60 or 70 USD. If you arrange your own transport and pay the entrance yourself, sometimes you pay ten times less.
For example; I took a Uber taxi to Los Tres Ojos (return price was about $5) and paid $2,5 for the entrance fee. That’s ten times cheaper than booking a tour!

Cheap internet – There’s a couple of different telephone operators in the Dominican Republic who sell sim cards with data. Orange and Claro are the most well-known ones, and also have the best coverage.
I bought an orange sim card from the airport. 250 MB for 7 days will cost you only 100 Dominican Pesos ($2,5). Do watch out though! Sometimes they try to take advantage of you being a tourist… You can find the official pricing of data packages on their websites.

Walk around – Santo Domingo may be a huge city with a couple of million citizens, the best part (for me) was the zona colonial. This smaller part in the city is easily done walking. Only use guaguas or Uber cars if you think it takes too much time to walk. By walking to the different parts of the zona colonial, you’ll also see a lot of the local culture and colonial buildings.

Zona Colonial – It is the most touristic part but also the most beautiful part of the city. This old, walled city is filled with colonial buildings. The absolute highlight is the old house of Christoffer Columbus (= Alcazar de Colon). The Parque de Colon and all of the other squares are definitely worth to visit too.
Make a stop at the Fortaleza Ozama and the National palace too.

Los Tres Ojos – A nice national park only a few miles away from the colonial zone. There are lots of tours who bring you here, but it’s way cheaper if you arrange everything yourself. An entrance tickets costs 100 Dominican Pesos (€2,2 or $2,5). After paying this, you can descend into the deep cave and see the three underground lakes. Go a little further to see the beautiful nature and see the fourth lake.

Malecon – You can walk next to the beach in Santo Domingo. Don’t expect the beautiful turquoise waters you can find in Punta Cana. In Santo Domingo, you’ll see the furious water jump high in the air when bouncing against the Malecon. It is not uncommon to see a lot of people with kites at the Malecon.

Grupo Bonye – Every sunday evening around 7 PM there is a big city party in the Zona Colonial. A local music group (Grupo Bonye) plays live merengue, jazz and other sorts of latino music. Tourists and locals alike dance under the influence of delicious coktails! For only €2,5 or $3 you can get a delicious mojito or margharita, so that you too can start to swing your hips like the locals do. The party takes place at the Ruinas del Monasterio de San Francisco.

The Los Tres Ojos Park just outside the zona colonial.

Organised trips – Dominicans don’t make a lot of money (the minimum wage is only 200 to 300 USD a month). Because of this, it isn’t uncommon that the Dominicans try to take advantage of the tourists.
Pretty much every organised trip costs ten times as much as what it actually should cost if you arrange it yourself.

Hurry up – You’re in the Caribbean and people enjoy their great country as much as they can! There is absolutely no stress here. Are you planning on going to a restaurant? Don’t get annoyed if it takes longer than an hour to get your food and then another fifteen minutes to get the bill…

Staying for a long time – If you don’t spend too much time looking at all the buildings and sights, then a day trip to Santo Domingo is definitely enough. However… I really liked to stay there for at least a couple of days. Because this way you can see the typical Dominican culture, visit the cosy parks, squares en streets. For me personally, three days was enough.

Walking alone at night – I never had any problems, but sometimes you hear these bad stories where locals rob tourists. In the zona colonial you shouldn’t have any problems, but a little bit outside of this area you’ll notice it gets a lot rougher. Trust your senses and don’t flash your wealth in people’s faces.

The Malécon of Santo Domingo. 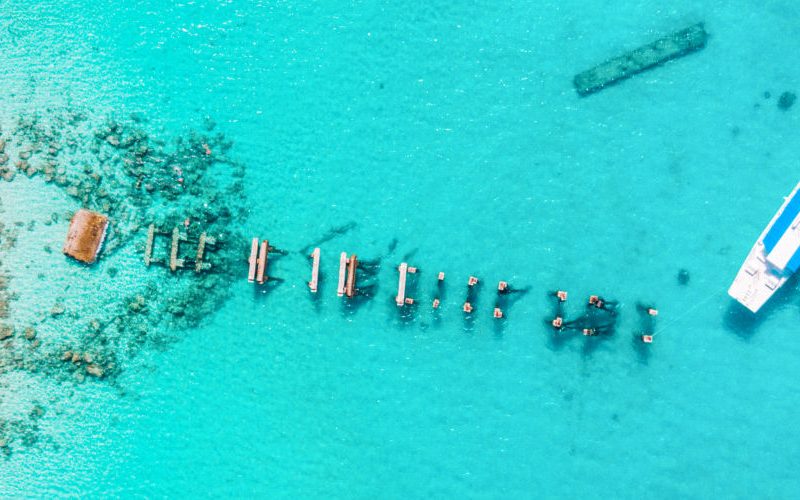 The Dominican Republic is surprisingly big! Therefore it is not possible to book the same excursions in every province. Still, there are some tours that are quite popular and can be arranged from all over the country. These are the best ones: The legendary Samana peninsula has become famous for its picturesque bay, breathtaking waterfalls and tropical green forests. Therefore …

After stuffing their bellies in the nutrient-rich oceans around the Arctic circle, whales return to more tropical places every year to raise their little ones. One of the best places to see this beautiful natural phenomenon is in the Caribbean. Therefore it really is a must-do when you go to the Dominican Republic! There are two places to spot whales … 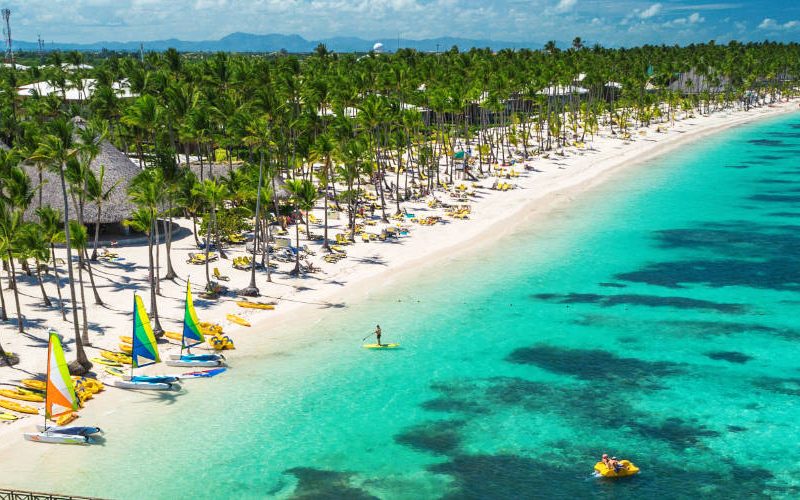 There are a lot more tours or day trips that you can organize from Punta Cana! I suggest to check out even more options on GetYourGuide. You can always cancel for free up to 24 hours in advance if you book with them.   Bavaro was in fact a village designed for the staff of the many resorts, but has … 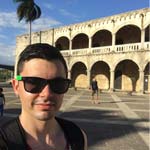 The capital of the Dominican Republic is a little bit of a culture shock when you arrive. But once you are there... it is beautiful! The Zona Colonial is great to walk around in and the Dominican food over here is delicious!

Santo Domingo is the capital of the Dominican Republic. From most big cities there are…