The beautiful Petra in Jordan is located quite centrally, only a few dozen kilometers from the border with Israel. This UNESCO World Heritage Site was not so long ago named one of the New Seven Wonders of the World. The huge site consists of tombs and caves in red sandstone carved out by the Nabataeans. A civilization founded their capital nearly two hundred years before Christ.
After several conquests and an improved trade route the city ran empty. It was only in 1812 that the Swiss Jean Louis Burckhardt rediscovered the city, allowing it to become the tourist hotspot it has become nowadays.

Petra is more than just the treasury.

To enter the park you have to pay quite a heft sum. Access for one day costs 50 JOD. For two days you’ll pay 55 JOD and for three days 60 JOD. Also, remember that you need a visa for Jordan and that these are quite expensive as well.

Stay – If you want to visit Petra, you have to look for accommodation in Wadi Musa. Because of the huge amount of tourists in this place, the prices are often slightly higher here than in the rest of the country.
Fortunately, you do not need to fear, because the rooms are still cheap. There are no real hostels in the area of Petra, but for a budget double room you only pay around $15 to $22.
A three-star hotel starts at only $33 per night.
A complete list of accommodation near Petra can be found on Booking.com and Trivago.

Transportation – In Petra there is no need for transportation. In fact, you can do everything on foot. Yet you also have the opportunity to explore Petra on a slightly more original way. You can do a donkey or a camel ride.

If you just want to to pose with a camel in front of the treasury, you’ll pay between 6 and 10 JOD per person. Feel free to also ask to have your pictures taken together with your travel buddies. You pay more than enough for only five minutes of their time!
To make a ride on a camel (ten to fifteen minutes) you pay 15 to 30 JOD.
Riding on a donkey from the treasury to the monastery will cost 7 to 10 JOD.

The entrance to the national park of Petra.

Bring your own lunch – Instead of spending a lot of money on food in Petra, it’s a better idea to bring your own lunch. Of course you can also go eat something outside Petra, but that way you would probably waist a lot of time because Petra is so big.

Bargaining – In Petra you can haggle everywhere (except the entrance). Riding a camel or donkey? You can easily have it for a few dinars less than the original price! The same applies to the many shops and souvenir shops you will find in Petra.

The shopkeepers and camel herders continue to follow you and otherwise harass you and tell you that you said “later”. In order to avoid problems and not lose money, you better be a little impolite.

Some bedouins still live in the tombs of Petra.

The Treasury – The treasury of al-Khazna is the most famous monument of Petra. After a walk of about two kilometers through a giant rock formation you’ll come out on a big square with a view of the gigantic tomb. The sooner you get here, the better. After the early morning has passed, there are hundreds of tourists admiring the beautiful monument along with the many camels and donkeys.

The Monastery – The monastery or convent (Al-Deir) is another monument which garnered a lot of interest among tourists. This beautiful temple is much less ornate than the treasury and for that reason it is considered a temple and not a tomb. To climb to the temple you have to do a little effort. You must climb 800 steps to reach it! Don’t feel like it? Rent a donkey to make the steep climb for you. In the afternoon, the path is covered in shadow.

Siq – Once you have paid your entrance, you’ll soon end up in the Siq. Between two giant rock formations, there is a big hole that eventually brings you to the treasury. Through this almost passage of almost half a mile long, you’ll encounter horses with or without carts quite regularly. On the sides of the rocks you’ll find carved gutters, in order for the Nabataeans to save rainwater and let it run through the city.

Petra by night – If you think Petra is already impressive during the day, I recommend also to explore Petra by evening. Every Monday, Wednesday and Thursday, a guide takes you along to the treasury of Petra which is illuminated for the occasion with 1500 candles. To witness this wonderful event, you pay 17 JOD and children under ten can enter for free.

The monastery of Petra is only visible after climbing 800 steps!

Animal abuse – Although it has improved significantly, there are still occasional forms of animal abuse in Petra. Sometimes the camels and horses are hurt quite badly by their owner. Do you see this happening? Tell the owner. If you continue to see people hurting the animal please call the tourist police (+962 3 2156487) or send an email to info@pra.gov.jo.

Climbing or entering monuments – Most monuments should not be climbed or entered. Please respect this, so that the monuments can be properly preserved. There are certain tombs and caves that you can enter and they are clearly marked.

Arriving late – Petra is gigantic! So it is better that you leave in time to get the most out of your day. Moreover, during the mornings there are much less tourists. And let’s be honest, isn’t it much more exciting to see the city on your own?

Slippers or bad footwear – The surface of Petra is full of pebbles, rocks and a lot of dust. Preferably wear closed shoes with which you can walk for a long time. The distances in Petra are quite long and often you also have some climbing to do.

On monday, wednesday and thursday you can visit the treasury, lit by thousands of candles. 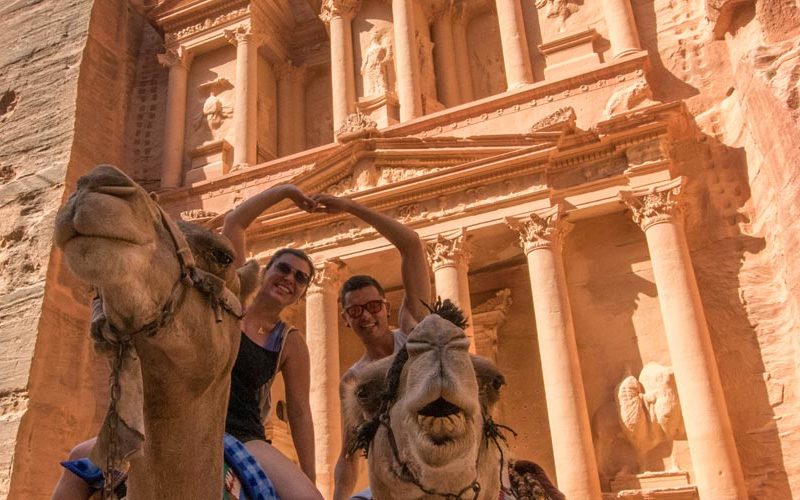 Around eight thirty we arrived in the former capital of the Nabataeans. The entire city stretches over several tens of kilometers and is entirely carved out of red sandstone. Due to aging, erosion and heavy rain a lot of the former houses and tombs unfortunately already collapsed or disappeared. But fortunately there is still plenty left to view and take in! The …

Traveling from Israel to Jordan is a real pain… You must know that Israel is really disliked by most other countries in the Middle East. Previously, anyone who had his or her passport stamped with an Israeli stamp, could no longer enter most Arab / Islamic countries. Fortunately, Israel changed its policy, and now gives a separate piece of paper on which the … 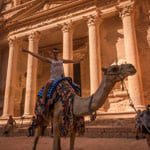 A few years ago, the beautiful Petra wasnamed one of the New Seven Wonders of the World. This beautiful, historic city deserves this title for sure! I thought it was one of the most beautiful sights I have seen during my travels!