From Singapore it takes a little over six hours to get to Kuala Lumpur. With the plane you arrive in a little less than an hour. The capital of Malaysia is characterised by lots of contradictions. The giant Petrona towers who tower over the city, once were the tallest buildings in the world. The area around this area clearly has benefited from tourism. But just a little further, outside the streets with gucci and channel stores, the slums take over. I'm still not sure if I liked or hated Kuala Lumpur. One thing is certain: always pay attention for robberies. Lots of backpackers that I've met got robber from a lot of money. I only lost 100 euro's.

Stay – Dirt cheap throughout the whole city. Hostels start at only five euro’s ($5,5) a night. Definitely pay just a tiny bit more for a place with a locker. Sometimes there are petty thieves who try to steal some of your stuff at night.
You want to be at ease during your stay? Maybe choosing a hotel can help. Budgethotels only cost ten euro’s ($11) a night. Ressorts or luxurious hotels are very cheap in comparison with European prices. For four or five stars, expect to pay around €80 ($88).
Click here for a complete list of accommodation and pricing in Kuala Lumpur.

Eat – Enjoy some delicious Malaysian meals for no money. Street carts or stands always are cheapest. For only two to five euro’s ($2 to $6) your belly will be filled. In a restaurant, expect to pay a tiny bit more. Prices usually start at €5 ($5,5). Western food is more expensive than local food.

Transport – Taxi’s are very cheap in Malaysia. But always try to negotiate before you enter the vehicle. Most of the taxi’s don’t have a meter and thus they will overcharge you.
Another, very comfortable and cheap way of transportation are the trains in Kuala Lumpur. They bring you to all major attractions and only cost a couple of cents or euro’s.

The very busy streets in KL.

Use trains – Taxi’s aren’t very expensive, but if you want to save some more money in the already cheap Kuala Lumpur, start using the train system. They are incredibly comfortable and modern, so you don’t need to be scared of rattling railcars. From KL sentral (the central station from Kuala Lumpur) to the Batu Caves, you only pay €0,50 ($0,75) for a single boarding pass. A taxi will cost you around five to ten euro’s ($5,5 to $11).

Haggle at the markets – The small markets who will show up after dark are filled with counterfeit products. The quality of these items is pretty good and thus make you want to buy some immediately. A smart salesman will definitely ask you too high of a price in the beginning. Don’t be embarrassed to drop the price.

Macaques at the Batu Caves.

Petrona towers – Right in the middle of Kuala Lumpur there are two giant towers. Once they were the highest in the world, and nowadays they still are very impressing. With 452 metres (1483 feet) the identical buildings rank ninth in the world. They still have the record of highest identical building in the world, though. With almost 85 Malaysian Ringitt a ticket they are very expensive. Converted, that would be about €20 or $22. Kids under twelve pay €8 or $9.

Batu Caves – The Batu Caves are one of the most popular hundi attractions outside of India. Before the 272 steps of the temple you will be greeted by a 43 metres high, golden statue. The steps themselves are crowded with tourists and monkeys alike. Watch out for loose objects such as bottles and post cards. The monkeys love to steal things from unwary tourists.
Don’t give up and keep going to te top! The view from the top is beautiful and the caves themselves are also worth a peek.

Chinatown – The little Chinatown is quite nice to see. Here, you’ll see how multicultural Kuala Lumpur actually is. Try planning your visit in the early evening. That’s the moment when sales people get their carts out.

Jalan Alor – A real piece of KL culture can be found at Jalan Alor. The small alleyways in this neighbourhood are filled with food stands and shops. Definitely try the local cuisine. Or just take a look at the unusual ways of preparing food.

I city – Unleash the tourist in yourself and visit this funny theme park. A little while outside of Kuala Lumpur, but quite easy accessible by train and taxi. I city is a big theme park that consists out of millions of LED lights. Especially impressive during the evening’s! Christmas at 35°C (95° F).

One of the many markets in KL.

Show off your wealth – I may sound like a broken record, but I heard it from other tourists too. Try not to overdress. Put your camera in your backpack or a place not too visible while visiting touristic locations. I regularly felt uneasy because of the many faces looking at me or my camera while I was travelling with public transportation in Kuala Lumpur.

Walk alone at night – Avoid walks at night. Try to take a taxi instead if you went partying. A lot safer and probably a lot cheaper instead of being stolen from… When you get in trouble, don’t bother reporting it to the Malaysian polis. They are incredibly corrupt.

Showing legs or shoulder – Advice for both men and women. Try to wear long pants and t-shirts (preferably long-sleeved). If you don’t want to be all sweaty, it might be a good idea to buy some clothes at the local stores. You really want to wear some more comfie clothes? Expect to get stared down by some annoyed people.

I city, just outside of Kuala Lumpur. 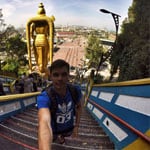 My opinion on Kuala Lumpur is very divided... There are lots of great activities and sights who are definitely worth the trip, but the people just are not friendly at all... Maybe next time I won't wear my tanktops or shorts?