The chance that you've already heard of Tromsø is slim. However, I personally think this is one of the best destinations in Scandinavia. Tromsø is often named the capital city of the north pole area. With more than sixty-five thousand people, a university and an airport, this little city is... not so little! Sometimes the city also gets called the Paris of the north. Why? I still don't know. I don't see a lot of similarities -, if any.

Stay – Scandinavia is expensive. Cities in Scandinavia are more expensive. ‘Capital‘ cities are most expensive. In Tromsø there is only one hostel (2016) : The Citycamp Tromsø. It depends a little on the season, but one night will cost you between thirty and sixty euros. (33 – 65$)
A hotel starts at 75 euro. (80$)
In the center self, there are quite some hotels to be found. You don’t necessarily need to book the hotels where all tours start from. (Scandic Ishavshotel and Radison Blu Hotel)

Eat – Because I had a little kitchen where I stayed, I cooked very often. For a small lunch that you can heat up you pay about five euros/dollars. Three croissants for breakfast cost me 4,20 euro (about 5 dollars).
Prefer to go out and eat something? Fastfood is the cheapest option. With the local burger king, you’ll pay between nine and fifteen euro for a menu. (10 – 16$)
Restaurants cost a lot more, and personally I don’t think you had a lot of good choices in Tromsø. Prices vary from 18 to 25 euros. (20 – 27$)
In general fish and specialties are more expensive.

Transport – Tromsø is very small and thus easily done on foot. Public transportation is not really necessary, because it is quite expensive. For a single ticket, you’ll pay about 5 euros / dollars. If you pre-buy it online you only need to pay 36 NOK (4 euro / 4,5 dollars) A 24h ticket costs about eleven euro’s or twelve dollars.

From the airport you can take a bus into the city center. Another option is the Flybussen bus. This bus awaits every flight right at the airport exit. A one-way ticket for this Flybussen is 90 NOK (10 euros / 11 dollars). A retour ticket is 140 NOK.

Hiking – The distances in Tromsø are very easily done by walking. From one location in the city, you can walk to the complete opposite side in about an hour. Most sights and must-see’s are in very close proximity of eachother. If you’d like to take the public transportation anyway, try to book in advance. That way you’ll save 14 NOK. (2016)

Combitickets – Two museums that you must see are the Polar Museum and the Tromsø museum. Both are easily seen in an hour and both entrances will only cost you 40 NOK for students and otherwise 50 NOK. If you buy a single ticket you already pay 50 NOK a ticket.

Compare tours – It is very likely that you’ll do one or multiple tours in Tromsø. All tours in Tromsø are amazing but they cost a lot of money.
If you want the best bang for your buck you have to compare tours. I did a northern light tour for 1400 NOK (€150 / $165) and one of 750 NOK (€68 / $72) (only guests of Citycamp Tromsø got this price).
Besides these excursions, I also did a husky sleighing tour of 1400 NOK with which I could drive the sleigh for over three hours. Another girl from the hostel I stayed told me she paid 1550 NOK and she could only drive for one hour.
Students get huge discounts, so ask about them! Even if you’re not a student! I never got asked for my student ID.

(Sometimes) book when you’re there – It’s not uncommon that you get discounts when you book when you’re in Tromsø. Student discounts often aren’t mentioned on-line. (however, you can just mail them to ask about them.)
Although booking while you’re in Tromsø can get you discounts, lots of the tours sell out quite fast. Especially private tours. They often are best rated but sell out weeks in advance.

Checking out the northern lights in Tromsø.

Aurora safari’s – Northern light tours always are fun! If you’re very lucky you might see the aurora borealis from Tromsø, but most of the times there’s too much light pollution for the northern lights to show up.

Tours that search for the northern lights are often specialised in looking at forecasts and often are directly in contact with the local weatherman or woman. With one of those tours, you are pretty much guaranteed to see the northern lights. Tours cost about 1300 to 1500 NOK. During summer the aurora borealis is almost never visible. So book your tour during winter.

You can do husky sleighs in both winter and summer. With or without snow.

Whale spotting – At certain times around the year you can spot lots of whales in the Norwegian waters. In certain months the huge whales come feed in these regions before they head back to warmer waters to give birth. In Tromsø you have a high chance of seeing humpbacks and killer whales. Most of the time you’ll see their fins or backs, but if you’re lucky they will jump out of the water to greet you!
Don’t just focus on the huge underwater giants. Also take a look at the beautiful landscapes around you.

Snow scooters – I didn’t do it myself, but I heard from other people that they absolutely loved it. It’s just like husky sleighing but… Without the huskies. Yep.

Museums – I just don’t like museums, but I always try to do at least one museum when I go somewhere. Well, I can honestly say that I really enjoyed the museums in Tromsø. No boring art (which, obviously, I just don’t get…) but lots and lots of info about the history and colonisation of this arctic city.
You also learn a lot about the local fauna and flora, the Sami (original citizens of these regions) and the polar explorers. Good to know is that the museums are very cheap too. The best museums (in my opinion) were the Polar Museum, the Tromsø museum and Polaria.

Hike – Besides the hundreds of tours departing daily, I would almost forget that the city itself is full of sights too. Definitely go walk to some of the small parks, or go see the Arctic cathedral over the very long bridge. There’s also a little beach, but don’t think you’ll get a tan out there.

No appropriate clothing – Tromsø is icy cold during winter. During summer, it’s a lot warmer but still not very warm. Be prepared and take enough clothing with you. During winter it’s recommended to wear at least six layers of clothing. Definitely take some waterproof boots. If you really want to be safe, take some crampons with you.

Renting a car during winter – Unless you are used to driving through snow from five feet hight: not a good idea. During winter, there’s almost no sun in Tromsø too. So besides the slippery roads, there’s also the restricted visibility. The locals know how to drive, so don’t make a fool of yourself and arrange a shuttlebus or tour.

Leaving your tripod home – Everyone who wants to take pictures of the beautiful aurora borealis: a tripod is absolutely necessary. No tripid? No pictures! 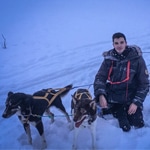 The most beautiful place I visited in Scandinavia is Tromsø. The city itself is very cosy and cute, but the activities that you can do from there are phenomenal! For an adventurous and active vacation you have to go to the capital of the Arctic!

Smack in the center of Tromso you can find the cathedral. This particular church is the…

The Arctic Cathedral is sometimes also called the ice sea cathedral. Although the building…

On the west coast of the island of Tromso, you'll find a concrete block which resembles a…

In Tromsø there are a couple of nice museums. One of these is the Polar Museum. It's…