The Polish city of Oświęcim (Auschwitz) was occupied by the Germans in 1940. When all the original inhabitants were chased away, several transit and extermination camps were built. The original intent was to take over some of the prisoners of the other Polish prisons, but we all know how it eventually turned out... The original camp for 10,000 prisoners grew out to Auschwitz-Birkenau and its many subcamps. Millions of people arrived here and faced a harsh regime. Most of the prisoners eventually died here.
What you get to see here is incredibly hard to grasp. The bunkers are filled with stories, photos and objects that should always remind us of this horror. This must be one of the most impressive and at the same time most sad museums in the world. I'll tell you all about it in this article.

Auschwitz I, the first camp of this concentration camp complex. It soon became overcrowded and new camps were added.

Stay – The biggest camps of Oświęcim (Auschwitz I and Birkenau) are a popular day trip from Krakow. A full day to visit both camps is sufficient in my opinion.
Combine your trip to Auschwitz with some other activities, otherwise it’ll become a very heavy experience… The perfect base is from Krakow.

If you still want to stay in Auschwitz instead, then of course you also have some possibilities. The surrounding city is surprisingly large and there are many accommodations available. A double room costs around $30 / £20 / €25 and for the same price you can often rent an apartment.
Look on Booking.com for all available places in Oświęcim.

Eat – You can’t eat inside the camps. Outside Auschwitz I there is a small shop where you can buy snacks, but it’s better to go to the center for a decent restaurant.

Transport – From Krakow you can take a bus or train that takes you to Auswitch. Another way to visit the camps is by booking an organized tour with a guide (starting at $30 per person).
Of course you can also make use of the public transport and explore the camps yourself. Do keep in mind, however, that there are almost no information signs in Birkenau and that a guide is therefore recommended.

There are two ways to commute to Auschwitz-Birkenau in your own.
The train takes a long time and drops you off quite far away from the camps. Because of this, I would suggest to take a bus instead. They drop you off closer to the camps and they’re cheaper as well. A single ride bus ticket costs 14 zloty ($4) and it’ll take a bit over an hour to get there. Tickets for an early departure are best booked online in advance. Buses are often filled up completely in the mornings, but also the evening returns from Auschwitz to Krakow can be sold out quickly. Try to be at the bus stop a bit in advance so you are sure that you can sit down. Standing up for one hour after a heavy day like that will be exhausting!
The buses leave from the central bus station of Krakow (near the central train station).
These are the departure times of the buses that you can already book online:

From Auschwitz I, there are free shuttle buses that drive you to the Birkenau camp. Otherwise it’s a walk of about 1.8 miles or three kilometers.

If you want to read more extensively how to get to the concentration camps with the help of public transport, I recommend reading this article too.

If you prefer to see everything a bit more detailed, you can also arrange a full-day excursion from Krakow with a guided visit. This costs between $30 to $45 per person.

The Auschwitz I camp. There was room for 10,000 prisoners. Soon it became hundreds of thousands…

Plan your visit yourself – A day trip to Auschwitz is one of the most popular excursions starting from Krakow. For your transport and a guide you pay about thirty dollars per person.
If you don’t need a guide, you can commute back and forth for eigth dollars to Oświęcim. If you travel with a family, this is definitely a cheaper option.

Bring your own lunch – Unfortunately, it seems like there’s some people trying to benefit from the millions of tourists who visit this memorial every year. The few shops that offer food ask a lot of money and there is very little choice… You better take a lunch with you or head into the city to look for tastier and cheaper food.

One of the exhibitions in the museum of Auschwitz. Here you see a gigantic book with almost all Jewish victims of the camps written in it.

Things to do in Auschwitz

Prepare your visit well – Try to prepare your visit a bit in advance. There are plenty of documentaries on Netflix (or other steaming sites) that give you an insight into what life in Auschwitz was like.
There are also a lot of books that you can read to better understand the terrible history of this camp. My guide from Birkenau recommended the following books: ‘I escaped from Auschwitz’, ‘The photographer of Auschwitz’ and ‘I survived Auschwitz’.
Of course you can also plan a day trip with a guide. A tour takes you to Auschwitz I and Birkenau and the guide will tell you everything you need to know. It may be more expensive, but it’s worth the cost in my opinion.

Auschwitz I, bunker 5 – One of the most poignant bunkers of the entire camp. Behind large glass windows you see collections of abandoned or excavated objects from the concentration camps. Hundreds of glasses, thousands of shoes, tens of thousands of pots and pans, … But the worst of all is the second floor, where you can see tons of shaved hair that once belonged to the victims…

Auschwitz I, bunker 7 – The sanitary block and the bedrooms are exhibited here. At the beginning of the camps the prisoners had to sleep on straw. As the years progressed, they were allocated bunk beds. The bathrooms were poorly maintained and everyone had only a few minutes to complete his or her entire morning routine.

Auschwitz I, bunker 11 – The Death block. In this bunker the cyclon B gas was used for the first time to kill people in the most horrible way. Next to this block you’ll see a small place where the death wall was erected. Many people were shot here.
You’ll also see wooden panels nailed to the windows. These had to prevent other prisoners from seeing what was going on here.

Auschwitz I, Bunker 20 – The entire ground floor of this block talks about the persecutions in France and how the Nazis have come to power there. When taking the staircase to the second level, you’ll find the museum that informs about how the war developed in Belgium. Look at the terrible pictures, read the legal texts that were introduced under the Nazis or be amazed at the disgusting propaganda posters they distributed.

Auschwitz I, bunker 21 – This part of the museum talks about the persecutions in the Netherlands. This bunker is full of beautiful and less beautiful photos and a lot of interesting pieces of text. Of course you’ll also see quite some information on Anne Frank.

Auschwitz I, bunker 27 – Another bunker that, in my eyes, had one of the most dramatic exhibitions. On the ground floor you find a gigantic book in which the names of almost all Jewish victims are written. In the next room you find some interesting documentaries with stories told by former prisoners.
The upper floor exhibits a lugubrious art collection. Children’s drawings found in Auswitch were carefully copied and drawn on the white wall. This will break your heart…

Birkenau – The largest camp of the Auswitch complex. Most people died here, as most gas chambers were built here. This part of the museum is much less informative and getting a guide is certainly not a bad idea. Yet you can already clearly imagine what horrors have happened here simply by walking through the large domain.

The death block, or bunker 11. Against this wall random victims were shot.

Things to avoud in Auschwitz

Showing no respect for the many victims – This goes without saying.

Exploring without guide / information booklet – A guide is certainly not necessary, but you’ll learn a lot more about this horror site if someone can tell you lively stories about it. In the visitor center of both Auschwitz I and Birkenau you can find books about Auschwitz-Birkenau as well. The informative guide costs about two dollars / pounds / euros, but there are also other booklets that you can purchase to expand your knowledge.
A guided excursion from Krakow to Auschwitz costs €30.

Visiting only one camp – Visit both Auschwitz I and Birkenau. Both camps are completely different and you can only really understand how life was in a concentration camp if you visited both. You can commute between the camps with a free bus.

Going too fast – There are some excursions offered where you can see both camps in half a day, but I think that’s too fast. I know of myself that I’m a very fast traveler, but in both camps I was anything but rushed. There is so much to read and see that you need at least one full day.

In the bunkers of Auschwitz I you’ll find informative museums, but be warned… It can be painful to see!

Do you want to see these terrible camps with your own eyes? For a smooth course of the day I advise you to arrange a guided trip. Moreover, with most of these tours you also get an interesting guide that takes you through the two concentration camps and gives you interesting stories and information.

» All tours and excursions to Auschwitz

If you want an impression of what the camps of Auschwitz look like, then this handy video will help you out. Drag your mouse left or right to change your point of view (smartphone or tablet users can just swipe left or right).

Inside Auschwitz – English version in 360°/VR
Did you like this article? Then give it 5 stars! Thanks!
In this article you'll find a few affiliate links. When you book something with these travel organizations, I get a small commission. You don't pay anything extra for that. You can thus see it as a way to support this blog if you found the information helpful. I use all of these travel organizations myself, and I will only recommend the ones that I really like. 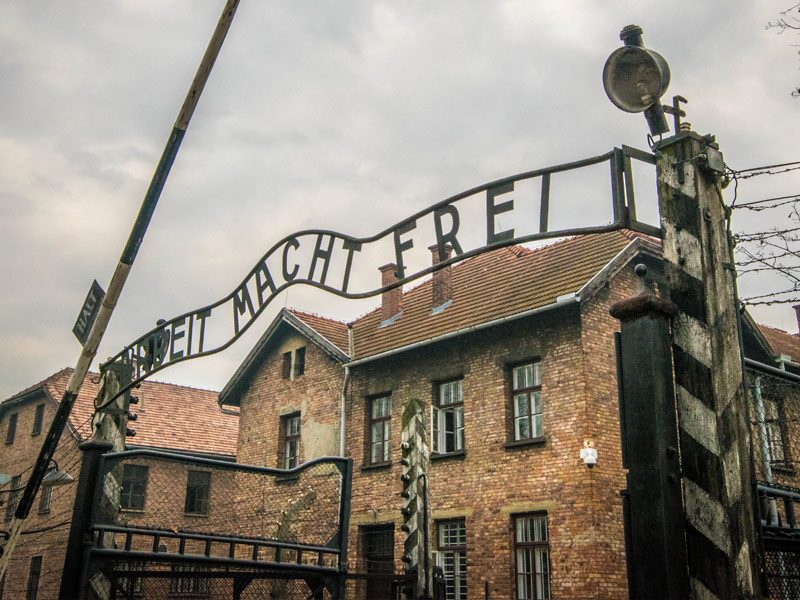 If you want to go to Auschwitz from Krakow, you have two possibilities. Either you can book an organized tour, or you can plan the entire trip by yourself by using public transportation. From others’ experiences on forums and some websites, I noticed that many people often thought that the tours were slightly rushed. And they couldn’t wander around in the camps by themselves …