Puerto Rico is a little gem in the Caribbean. The country is part of the United States, but then again not really... It is considered 'national territory', but they don't have the same rights and duties as the mainland. Puerto Ricans do have an American visum and they are consequently American citizens.
The island is quite big and there is a lot to see. Every part of the island has its own features and within a couple of hours of driving you'll notice immense changes in nature and cities.
Because of the American influences, Puerto Rico feels very much like a western country, but with a mix of the great Caribbean and latino influences from its neighbouring islands. For me, Puerto Rico was one of the best destinations in the Caribbean.

The old town of San Juan, the capital of Puerto Rico.

Stay – The prices in Puerto Rico are very similar with West-Europe or the United States of America. The cheapest way to spend the night in this country is to stay in a hostel. Expect to pay between $15 and $30 here per night.
A twin or double room starts around $50 a night. If you prefer to have something more luxurious, you’ll be charged around $70 or more a night.
For a complete list of accommodations in San Juan, you can look here. For Vieques take a look here and for Rincon here.

Eat – The cost of food depends on what you want to eat and how much you want to give for it. If you want to cook yourself, you can do it very cheap. There are plenty of supermarkets all around Puerto Rico.
If you prefer eating out, it doesn’t need to cost that much.

Most American fastfood chains are well represented in Puerto Rico. Besides that, there also are quite some foodtrucks or ‘pincho’ stands all around the roads and cities. These offer delicious, authentic food for very low prices.
For a yummy pincho (pork or chicken on a stick) you’ll pay between $2 and $3. For fastfood a little more. Between $6 and $12, depending on your hunger level.

Transport – Throughout the Caribean, public transportation isn’t always good or just completely non existent.  Puerto Rico is a welcomed exception on this. In the bigger cities there is an excellent bus connection that can bring you to pretty much all touristy spots. A single ride costs $0,75 (the big busses) or $1 (the little busses).
There also are plenty of taxi’s, but these are rather expensive.

I didn’t rent a car in Puerto Rico, but I do think that it’s alright to drive there. The island’s inhabitants may drive a little wild sometimes, but eventually everyone seems to follow the rules and the roads look in good condition.

Tours – Tours often are a little overpriced in Puerto Rico. The most well known is to the El Yunque rainforest and the bio bay. When I looked around, I couldn’t find anything cheaper than $60, but often they were already sold out and then you’re only left with options of $90 or more…

A good recommendation is Cumba Tours. Definitely if you are with a couple of people. The tours are done by a local, Genesis, and she takes you through the whole island. Most of the time, she is a little too enthusiastic and she shows you a lot more than what you originally planned. I booked a tour with her for two days and I was extremely happy with her. I would even dare to say that they were the best tours ever that I took on my many travels.

For a tour with two persons to the El Yunque rainforest and the indian caves (or the lime stone caves) we paid $80 a person. The more persons you get to sign up, the cheaper it gets.

One of the waterfalls at the El Yunque rainforest.

Eat streetfood – It’s cheap and delicious! Around most roads or highways you’ll see a couple of food trucks preparing local specialties for you. The food is cheap and really yummy! In a restaurant you would pay almost triple!

Drink tap water – The water that streams through the Puerto Rican piping is very clean and thus drinkable. By filling and refilling a water bottle, you’ll easily save tens of dollars. The climate in Puerto Rico is very humid and you need to rehydrate yourself the whole time.

Take the bus – You’ll probably land in San Juan if you visit Puerto Rico. In this city, the public transportation is excellent. That way you don’t need to pay for an expensive taxi while visiting many of the sights and monuments.

Drink local beers – Local beers always are a lot cheaper than the imported brands. The most famous local beer is the Medalla. Great and not expensive at all!

The Castillo de San Felipe. One of the two huge forts in San Juan, Puerto Rico.

El Yunque – On some moments of the day there are a lot of tourists. So try to go early on in the day. The El Yunque rainforest is the only one in the United States and is definitely worth a visit.

You can just drive there and already see a lot. If you would like to swim under a waterfall, just take one of the many paths that lead you through the rainforest. You don’t need to be scared from dangerous animals or insects. The only thing you’ll see are non-lethal birds, frogs and snails.

La Cueva del Indio – One of the most beautiful natural places I’ve seen was the Indian Cave in Puerto Rico. This giant rock formation is hollow from the inside and was used as shelter for the original inhabitants (the indians) of the island a couple of hundreds of years ago. A remnant of their culture are the beautiful petroglyphs.

Descend in this mysterious place, but don’t forget to also walk a little further over the rock when you come up again. The further you walk away from the cave, the better the view gets. Eventually, you’ll arrive at a little rugged beach from where you can walk away.

The entrance to this national monument is free, but the closest parking and entrance is in private hands. Every person needs to pay $5. If you don’t want to pay this, you can better do a little detour towards the beach. That way you can climb over the rocks yourself.

Old San Juan – The most authentic and original part of San Juan is located in the northern part of the city. The little island is perfectly accessible via a couple of roads linking to the island. You can easily take public transportation to get there.

Just stroll around to soak up the great atmosphere and see the beautiful squares. Definitely go have a look at the Castillo de San Cristóbal and the Castillo San Felipe del Morro. Both forts were incredibly important for the survival of Puerto Rico and they are well maintained. Great to see a medieval castle in this Caribbean setting!

Visit islands – Puerto Rico is an island on its own, but it has a couple of little islands of itself too. Vieques en Culebra are the most well-known and they hey some of the most beautiful beaches of the Caribbean. There are regular ferries that bring you to one of these islands.

Forget your ESTA – Puerto Rico is part of the United States and so it is necessary to apply for an ESTA. This VISA costs $14 en is valid for two years.
Be sure to print it out and have it in your luggage. Before you leave to Puerto Rico, it might be necessary that you show it to the airport personnel.

With an ESTA you can visit Puerto Rico or the United States for a total of 90 days.

Always apply for the ESTA well in time. It can easily tale a week or more before it is approved.
You can apply for an ESTA online via the official website of the American government.

Rainy season – From the end of may or the beginning of june, it is rainy season in Puerto Rico. It is quite possible that you get soaking wet every day. You won’t really enjoy your holiday that much then, will you? The rainy season is all summer long, so plan accordingly.

La Cueva del Indio. One of the best sights in Puerto Rico! 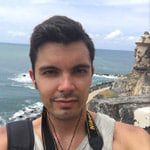 It surprises me that Puerto Rico isn't mentioned more in some travel guides! This quite big Caribbean island has beautiful beaches, gorgeous nature, a great culture and delicious food. In short... The perfect holiday destination! Because of the American influences, it is a very civilized country and you'll immediately feel at home.