Riga is the capital of Latvia and also the biggest city in the Baltic countries. With a cozy town, a tasty local cuisine and a thriving nightlife, Riga has everything for an amazing city trip.
The city is inhabited mainly by Latvians and Russians. However, from the Soviet regime not much is left besides a few commemorative monuments and museums. Riga has become a modern, open-minded city that is one of the most accessible cities from the Baltic countries. From Riga you can easily commute to some other Latvian curiosities and of course the other Baltic States.

The house of blackheads, probably the most famous building in Riga.

Stay – The biggest city of the Baltics is also the most expensive one in the three countries. Expensive is an exaggeration, because even luxurious places cost almost no money when compared to Western Europe.
For a five star hotel you pay a minimum of €125 per night. One star less will easily save you fifty euros or more, if you’re lucky you can already book a four star hotel for €50 with breakfast included!
A luxurious three-star hotel sells for as little as €30 per night.
For backpackers or budget travelers, there are hostels from already €6 per night.
Definitely check booking.com for availability and exact prices.

Eat – You can eat dirt cheap in a few fast food chains like Lido. For baked baby potatoes and a chicken schnitzel I paid only €4,50.
Tastier food won’t break the bank either. A delicious main course, dessert and a soft drink cost no more than €15 per person.

Transportation – If you buy a ticket from the bus driver to to use trams or busses in Riga, you pay €2. If you buy an E-ticket in advance, you’ll pay €1,15. You can also purchase e-tickets for five trips (€ 5,75), three days (€10) or five days (€15).
The train is ridiculously cheap. From Riga to Jurmala or the Kemeri national park costs less than two euros per ride.
If you want to travel longer distances, for example from Riga to the capital of another Baltic country, it is best to take long destination busses. Riga to Vilnius will cost you around €17, and from Riga to Tallinn you’ll pay €16,50.

Art nouveau in the streets of Riga.

Walking around – Riga may well be the largest city in the Baltics, it’s still not a metropolis. The main sights and attractions are located in the old city, and those that aren’t can be easily reached on foot.

Drink tap water – When you keep buying bottled water, you’ll eventually pay quite a lot of money ánd it’s also bad for the environment! Instead, just fill up your used bottles with tap water. It’s perfectly clean and healthy.

Eat local specialties – Don’t go for for a burger, pizza or pasta. Try out some local dishes! I guaranty you that they’re tasty! The Latvian dumplings with sauerkraut, for example, are surprisingly delicious. Just like the incredible desserts at which I still think back with a drooling mouth. The local specialties are much cheaper and often better than the international cuisine.

The view from the St. Peters church in Riga is formidable!

Explore the Old Town – The most beautiful part of Riga is definitely the old town. Just behind the Freedom Monument you’ll start to see the picturesque and quaint squares, shops and houses. Look for the house with the statue of the cat on the roof (‘Cat house’), behold the beautiful house of the black heads and bend your neck all the way back to fully see the tower of the Petri church. This was once the highest church tower in the world and today it still is one of the highest churches in the world!

Petri Church viewing platform – You’ll get the best view of Riga from the viewing platform of the Petri church. You can walk 360 degrees around and gaze out over this magnificent city. The entrance fee (€10) is quite expensive for Riga, but it’s well worth the money. Try to go around dusk. Then you’ll see Riga during the day, during sunset and with all the pretty lights when it gets dark.

Orthodox church – The golden dome of the Orthodox church in Riga is very impressive. The huge building is marvelous at both the inside and outside. From the Skybar (Radison Blu hotel) you get a nice view over the top of this religious structure.

Radison Blu Skybar – If you want to get a nice view over the city, where you can simultaneously enjoy a cocktail and where you stay completely dry, they there’s only one place to go. The Radison Blu Skybar. Safe and behind glass you can watch the entire city while you enjoy a cool beer, cocktail or other drink. The prices are of course higher than in town, but for such beautiful sights it really isn’t that big of a deal to pay some more.

Kemeri National Park – Everyone who loves nature should escape from the busy city life of Riga by visiting the national park Kemeri. Although it’s not easy to get there by yourself, the views you’ll get are worth all the trouble!
The deep swamps (bogs) are a wonderful piece of nature, and from the tower in the middle of the park you get an unparalleled view of this domain which might make you think of another planet.

Discover the art nouveau – Outside the historic center there also is a lot to see and experience. Fifteen minutes outside of the city and you’ll find beautiful and graceful sculptures that seem to crawl out of the facades of the residential buildings. The Art Nouveau district of Riga is supposed to be one of the most beautiful art nouveau districts in the world! So it’s definitely worth a visit. A well-known street where you’ll find many of this art form is ‘Jauniela’.

Railway station at night – During the daytime the neighborhood just behind the railway station is already a bit gray and bleak, but it is especially at night that some tourists fall prey to thieves. Definitely head there during the daytime to look around this industrial area, but once it starts to get dark, you don’t really have to be here. And in fact… There isn’t that much to see either.

Fast food – Fast food is almost as expensive as local specialties. Skip on the hamburgers and fries and just try some new foods. Who knows… Maybe you’ll fall in love with some Latvian specialties. I certainly did!

Just outside the historic center of Riga, you’ll find some beautiful building in art nouveau style. 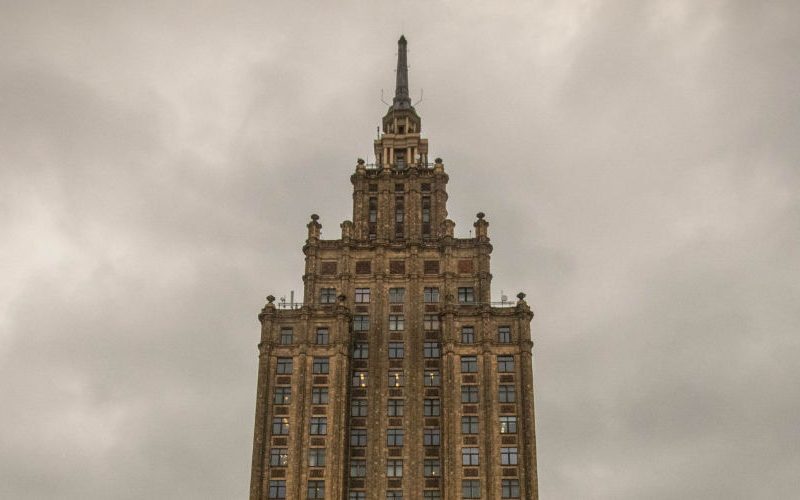 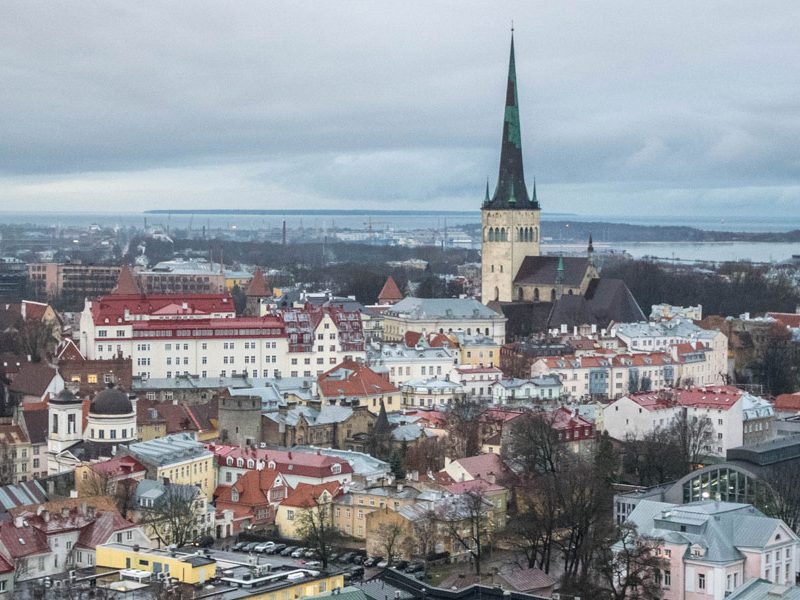 For two euros I take the tram and fifteen minutes later I arrive at my hostel for the next three nights: the United Backpackers Hostel. Cheap, clean, friendly staff. What would a backpacker want more? Earplugs maybe, because my two neighbors seem to organise a snoring contest every night. Well… Staying at youth hostels doesn’t only have advantages! It’s true what they say. … 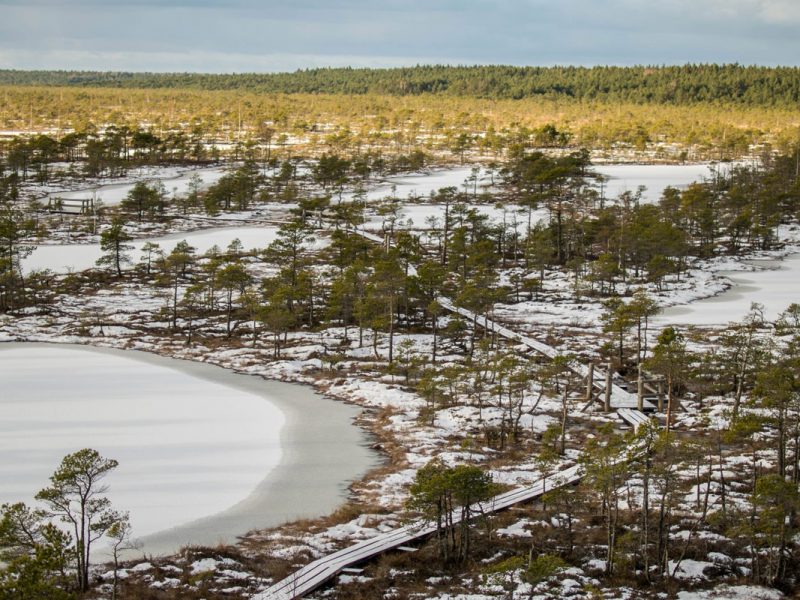 The Kemeri National Park lies less than fifty kilometers from Riga. This park is a large nature preserve, best known for his giant marsh (bog) landscapes. In some places the swamp is as deep as of twelve storey building! Not exactly a place you want to go take a dip in! Luckily, beautiful wooden pathways were laid out so you can visit the park …