I could call Los Angeles my hometown for over two years. And if there's one city where I have a love / hate relationship with. It is Los Angeles. Forget the glitter and glamour that you always see on TV. Los Angeles is the city of broken dreams and faded glory. Of course the city still has a lot of stars walking around, world premieres of new blockbusters and decadent party animals, but this is certainly not part of most people's daily life in the City of Angels. The city is not European at all. The different districts are far apart and it is king car who rules the city. The assembly of more than hundred different happiness seeking nationalities give this city an amazing cultural background. A lot of these people chase their dreams until they get smashed to pieces. Because, let's be honest, who doesn't want to be in the spotlights nowadays? The competition is killing! And the restaurants, bars and clubs are overcrowded with future actors, singers and showbizz people. Los Angeles is definitely a city of contradiction. And that is just what makes it so attractive.

Stay – The different districts in Los Angeles have very different accommodation costs. When you’re going to LA for a longer period of time, maybe try to stay in several of the districts. All of them are very different. I personally liked Hollywood, West Hollywood, Santa Monica and Downtown L.A most. Around these areas most of the sights and activities are to be seen anyway. A dorm or hostel shouldn’t cost you more than $20 in L.A. Similar to the rest of the USA.
For a single room you’ll pay about $50 (€45).
For a motel in the center of the neighbourhoods I talked about earlier you will pay about $60 (€54).

A complete list of accommodation in Los Angeles you can find here.

Eat – Oddly enough I never thought the food was very expensive in Los Angeles. You can eat a healthy, yummy meal for less than $10 at chains like Chipotle. (Believe me, the portions in the US are HUGE!)

In a restaurant, expect to pay between 30 or 40 USD for a main course, a dessert and a drink.

Transport – One of the pain points in Los Angeles is the transport. There is public transportation, but it is quite slow and just not enough for this big city.

For a single ticket you pay $1,75. You can buy these tickets in advance (with a tap card) or by paying on board. There also is a metro in LA but it only reaches until Hollywood and downtown LA. Certain attractions or sights are quite easy to see with public transport. For example; Hollywood Boulevard.

Taxi’s are quite expensive, so try to avoid them. A great solution to the transportation problem came in the form of the apps “Uber” and “Lyft”. They get used by EVERYONE throughout LA. On average, they are two to three times cheaper than hiring a taxi.

Uber and Lyft – Download these apps on your smartphone, because it can save you up to hundreds of dollars. You drive with the locals to wherever you want for a cost that is 50% to 75% cheaper than taking a cab. Also; you don’t need to tip with these apps: double savings!

Don’t tip in chains – It is a custom to give tips in America. However, this is not necessary in every restaurant of bar. Chains like Starbucks, Wendy’s, Chipotle, Wetzel’s Pretzel’s, In ’N Out Burger, … are yummy, cheap and tip free!

FlyAwayBus – From the airport to the center of the city is still an hour drive. A taxi will cost you $60 (€56). A shared shuttle bus that you book in advance costs about $15 to $20, but the absolute cheapest way to travel to and from the airport is the FlyAwayBus. You don’t need to book in advance for these busses. A single ticket costs $7 and it drops you off at Union Station. The central station in Los Angeles. From there you have excellent connections to other parts around LA.

Predrinks – You plan on going out in Los Angeles? Buy your drinks in advance in stores like Ralph’s. Beer and other alcoholic drinks are really expensive in the City of Angeles. On average a beer costs $7 (€6,50), a shot $6 and a cocktail anything between $10 and $25!

Muscle Beach – Actually there are two. Both are at walking distrance from Santa Monica. One of them is for the gymnasts (with rings) and the other one features an open air fitness where Arnold Schwarzenegger himself started exercising!

The Beaches – Malibu, Santa Monica, Venice Beach, … They all have their own culture and every single one of them is fun. Definitely take a walk on the famous Santa Monica Pier and go people watching at the hippy community of Venice Beach. For surfers, Huntington Beach is the best!

Hollywood – Everywhere in the world, Hollywood is seen as the center of glitter and glamour. Go take a look yourself and see how dirty this city actually is. Besides the very long walk of fame, the dolby theatre and the Chinese theatre you will definitely see some very weird people around the boulevard.

Downtown L.A. – The only real center of LA. You can’t really call them skyscrapers, but still the buildings are quite high. Definitely go to the fashion district to find soe of the many cheap markets.

Halloween in West-Hollywood – Are you in Los Angeles during Halloween? Excellent! Go to West-Hollywood (WeHo) on the 31st of October and dress up as whatever you like! You’ll be accompanied by thousands of others. And together you can parade over the 5 miles long street that is completely car free for this evening. This is one of the world’s biggest halloween parades, so you can not miss it!

Gay Pride – Forget what you saw on the TV. There are hardly any almost nude men or women, dragqueens and transvestites on the gaypride. Most of the people who take part in this celebration are very ‘normal’.

The gay pride starts in the morning and ends in a giant, multiple day festival all around WeHo. Celebrities like Ke$ha (2015) and Demi Lovato (2014) put on an amazing act and after that they join some of the parties all around West Hollywood!

Beverly Hills – The shopping spot from the jetset. Go to Beverly Hills and Rodeo Drive to be amazed. Who pays $250 for a pair of socks anyway?!

For an impressive shopping center, you must go to the Beverly center on Beverly Boulevard.

Foodies – America doesn’t always have the best food around, but in Los Angeles there’s plenty of delicious food. That definitely has to do something with the multicultural background of the city.

If you want some delicious Italian food in an authentic setting, go to Micelli’s in Hollywood. Marylin Monroe and Frank Sinatra were regulards here!

There even are some excellent fastfood chains like In ‘N Out Burger and Chipotle around the city. Definitely give it a try.
And last but not least: try some Korean BBQ. Great to do with family or friends. And you can eat just as much as you like!

Stay on the bus too long – The airco in the busses are freezing cold while outside it is very hot. Guaranteed cold. From central Hollywood to Santa Monica beach with the bus is not a very good idea if you don’t take an extra jacket with you.

Taxi’s – They are unreliable, not to be found when you need them and they cost way too much money.

During my two years in LA I never had any problems, so I can say that Los Angeles wasn’t an unsafe place. 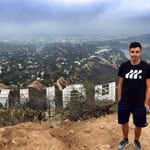 I lived in Los Angeles for over two years and I still don't know exactly what to think of it. It is a city of contradictions, but that just makes it all the more interesting. There's so much to see in and around Los Angeles. A city that you must have seen.