Sanfran or the city by the bay is famous from its steep street, the Golden Gate Bridge, Alcatraz, its love for homosexuals and gay rights and the second biggest Chinatown in North-America. What surprised me, was that the city has a very European vibe. A little similar to New York, but in a miniature version. Everything inside the city is very close to each other which makes it very easy to walk around. California might have a lot of sun, in San Francisco the temperature changes quite often. This has to do everything with the location of the peninsula. Because it's so close to the coast, you'll notice that the Golden Gate Bridge often is covered in a thick mist. San Francisco has its own airport but the route from LA to SF is too beautiful to pass on. You'd rather not drive yourself? Take the MegaBus or Greyhound bus lines. Cheap and easy!

Stay – San Francisco is one of the most expensive cities in the USA and even in the world. For accommodation you’ll need to pay a little more than what you’re used to in the US. The lowest price I saw for a hostel was about $40 (€36). For only ten dollar more you have your own, little room. So maybe that small extra is just worth your privacy.

Transport – The transportation in San Francisco is excellent. There are busses, cable cars, metro’s and trains. A single ticket costs $2,25 (without changing vehicles). Taxi’s are quite expensive and generally not necessary. You can hire a bike. That way you can ride over the Golden Gate Bridge yourself. Riding a bike costs you between $20 and $40 a day. Electrical bikes are more expensive.

Muni Pass – If you plan on taking public transportation in San Francisco for multiple days, a muni pass might save some money. These passes are good for unlimited rides on all forms of public transport. For three days you pay $31, for 7 days $40 (€36).

Chinatown – The biggest and most enjoyable district in San Francisco. It is in fact the second biggest Chinatown of the USA, so you easily can get lost in it for a couple of hours.

Golden Gate Park – Great to do a trip to during summer. Spotting interesting people is not hard here. Take your pick nick with you if you can.

Alcatraz – The jail who had Al Capone and the Birdman as their guests . This completely separate prison island will give you the chills. Especially when you hear the gates closing. If your English is good enough, try to take an English audio guide. The stories are a lot better in English!

Fisherman’s Wharf – You don’t need to go to a zoo in San Francisco to spot wild animals. Go to the Fisherman’s Wharf and in the distance you’ll already hear the very loud sea lions who are tanning on the floating rafts. Most of them can be seen at pier 39.

Ga uit in Castro – Castro is the gay area of San Francisco but it is accessible for everyone. Great parties with something for everyone! Besides clubs, there also are a lot of cosy cafe’s and restaurants.

Lombard street – Another famous sight in San Francisco is Lombard Street. This very steep street is filled with hairpin turns and is in fact the steepest street in the world. You rented a car? Use the break as many times as you need. You’ll need it.

Cable Cars – The steep streets of San Francisco get climbed heroically by the famous cable cars. For $7 (€6,5) you can be a guest on one of them. Definitely stay seated until the cart reaches the end. There you’ll see how the cable cars are turned in a very ingenious way.

Shop – Nothing is more fun than one central shopping street. In the center of San Fran you have a couple like these. On some of these, there also are some nice shopping centers who have the best shops in town.

Rent a bike – From one of the Wharfs or in the center of San Francisco you can rent a bike. From there you can cycle to the Golden Gate Bridge and in between you’ll see some beautiful monuments and parks. If you have enough time, make a stop in Sausalito.

Sausalito – The small city at the other side of the Golden Gate Bridge. A steep road down and then to your left. It made me think of a southern coastal city, but then without being very warm. Definitely go take a look to the famous stilt houses and a little bit further to the cosy boat houses.

Muir woods – For everyone who can’t make it to the sequoia trees in Yosemite National Park, the Muir woods already are very impressive. Here you’ll find a collection of the most huge and biggest trees of the world. Impressive to see all these trees, but also very pleasant to hear the deafening silence from nature.

Eat at Fisherman’s wharf – The sights may be phenomenal, the food in general isn’t very good. Most of the times also overprices. Instead, try to go to one of the many restaurants who are located just a little further from this touristic hotspot.

Packing too little clothes – Sometimes people make jokes that there are four seasons in one day in San Francisco. But this joke isn’t too far from the truth. Shorts in San Francisco aren’t always a good idea. Definitely try to take a jacket or sweater with you. During the evening, the city cools down quite a bit.

One of the many steep roads passing through San Francisco. 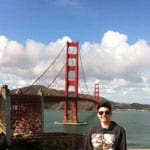