The District of Columbia, in Europa normally known as Washington is the capital of the United States of America.
You absolutely can not compare Washington to any other city in the US. Crammed with cultural and historical buildings, the capital is unexpectedly pleasant to visit. The only thing that gives away that you're not visiting a European city is the view of the hundreds of thousands of little American flags fluttering proudly along the broad avenues and boulevards. If you get to know the city better, there of course is a lot more that makes clear how American it actually is.
The most famous monument of the US, the White House, also got built on the grounds of the District of Columbia. Definitely worth a visit. Just don't start thinking that the president will also be there to welcome you personally.
Did you by the way know that Washington was built on swamp grounds? That's why there's a very humid climate with lots of rain during summer. During winter make sure you take some extra sweaters and jackets because the weather will get brutally cold.

The white house in Washington.

Stay – Everyone who wants to explore the capital as a backpacker: you’re in luck! There are plenty of hostels in Washington. The cost depends on the season you’re visiting, but on average you will pay $20 to $30 a night (€18 – €27).
A private one or two persons room starts at $100 (€90). For that price category you will probably located a little outside of the city. To stay in a luxurious hotel in the city center, you’ll pay about 200 USD (€180) a night.

Transport – Public transportation in Washington is very good, but very expensive. Metros and busses cost you $1,75 minimum. However, most rides are a lot more costly and will easily cost you $5. From the airport you can get to the city center quite easily using metro.
A cheaper option to see big parts of Washington is to rent a bike at Capital Bikeshare. Read more at “Money Saving”.

The pentagon in Washington.

Capital Bikeshare – Around all of Washington there’s plenty of bike stands with red bicycles from Capital Bikeshare. You can rent such a bike for one or three days or you can choose whatever days you would like to rent your bike. For one day you pay $8 (€7), for three days you’ll pay $17 (€15) and if you choose yourself how long you will drive the bike you’ll pay $10 + $7 a day you hire the bike. The forst half hour you ride the bicycle is completely free. From then on, every half hour you drive extra with the bike will cost you a little extra.

Silver Line Express from the airport – Public transportation in Washington is quite expensive, but taxis are even more expensive. Use the Silver Line Express bus to take you to the nearest metro station in Washington and from there on you can plan your metro trip to any other locations. A single ticket costs $5 to go to the Wiehle-Reston East Metro station.

SmarTrip card – You plan on using the metro regularly? Then buy a SmarTrip card. This plastic tap card can be recharged every time you go on the metro. The ticket itself costs $10 (€9), but $5 go to your credit immediately. If you buy a paper ticket every time, you’ll need to pay $1 extra for every ticket.

Gratis musea – In Washington there are lots of museums and most of them are completely free. A must is the Smithsonian with it’s amazing collections. But the nearby located museums are definitely worth a visit too! Go see the national mall for all free museums. If you’re there during summer, it’s a handy place to spend some time while it pours outside!

National Mall – Take your camera with you to monuments like the Washington Monument and the Lincoln, Jefferson, Martin Luther King Jr. and Franklin Delano Roosevelt memorials. The White House is just a bicycle ride away from the National Mall.

Tour het Capitol – Take a guided tour through the Capitol. Completely free! The entrance is free, but you need to reserve tickets. Try to order these online in advance so that you always can go, even on busy days. Don’t take too much with you though. Big backpacks, water, food and deodorants are all forbidden.

Library of Congress – After your tour through the Capitol, you should definitely go to the Library of Congress. I was surprised of the beauty from this giant library. On a regular basis, there are free guided tours in the library. But expect to get a lot of little details and historical background. So maybe… Just go explore on yourself!

Arlington Cemetery – You will get silent when visiting the thousands and thousands of rows of white gravestones, marking the fallen soldiers of the US. Beautiful and saddening at the same time. But definitely worth a visit! Also go see the Tomb of the Unknown Soldier and the final resting place of president Kennedy.

You can get there easily with the metro station. Don’t use Capital Bikeshare, since there are no nearby locations to drop off your bike.

Museums – I almost never like museums. But in Washington, I have to admit I did a couple which I liked. I got tips from friends to hide in museums when it was raining and a little while later, it seemed I already had spend a couple of hours exploring. The Smithsonian has something for everyone. Top picks for me were the Museum of Natural History, the Air en Space museum en the US Holocaust Memorial Museum.

Pentagon + Fashion centre Pentagon City – Try to take a look at the Pentagon. This building is used by the American intelligence service for army and safety purposes. Tours around the Pentagon are a possibility but you have to book a long time in advance. So, absolutely don’t forget to do that! Around the Pentagon there is a memorial to commemorate the innocent victims of the 9/11 attacks.
To make the mood a little lighter, you might want to hop on the metro and get off one stop later. At the Fashion centre in Pentagon city there is a giant shopping center.

Walk everywhere – The distances in Washington DC don’t look very huge, but in fact they are… You can see the monuments from far away, but to walk from one to another, you will easily lose 45 minutes. A better option is to take the metro or a bike.

No jackets – The weatehr in Washington can change in a heartbeat. Don’t forget to take a (light) rain jacket at all times. 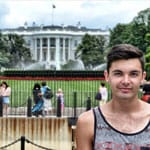 The beating heart of the United States is definitely worth a visit! The cultural capital has hundreds of activities, sights and a good insight in the American culture. With beautiful museums which are completely free you'll even get to learn something!