Michelangelo's David is the male sculpture what the Venus from Milo is for the female statues. This iconic statue is a masterpiece and certainly shouldn't be missed when visiting Florence.

Tickets for the David

Check prices, availability and skip-the-lines for the Accademia here. 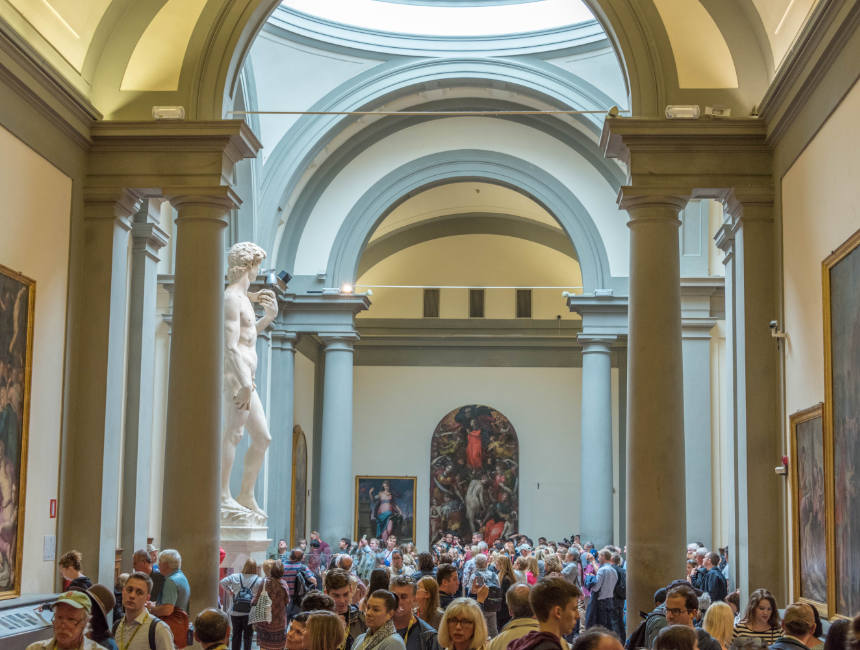 The David is very big! Just look at its sheer size compared to the hundreds of visitors that walk below it!

Michelangelo is undoubtedly one of the most talented artists that ever lived in this world. His full name, Michelangelo di Lodovico Buonarroti Simoni, sounds almost as beautiful as his artwork. In addition to sculptor, he was also a gracious painter, with one of his masterpieces being the the Sistine Chapel in the Vatican. Furthermore, he was an architect and poet and lived in Florence in the late fifteenth and early sixteenth centuries. His best-known work, the statue of David, is the highlight of Renaissance sculptures. 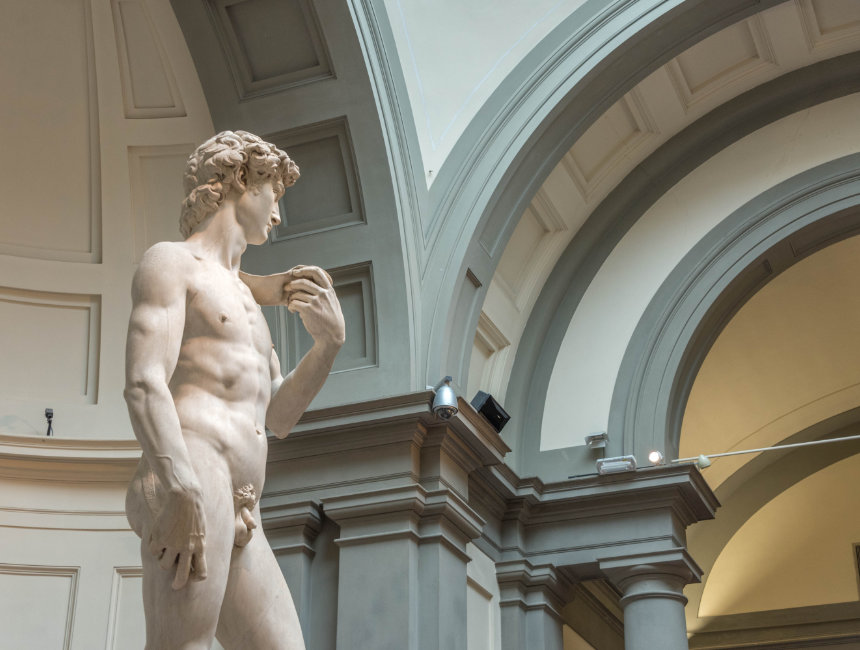 The most loved piece of art in the Galleria dell’Accademia is of course ‘The David’. But there’s plenty of other great things to see!

Who was the David of Michelangelo?

David was the second king of the kingdom of Israel and was famous for his fight with Goliath. This giant harassed the Israeli people until the young David, who until then worked as a shepherd, took up arms and fought him. David was just armed with a pendulum and a stone but nevertheless he could sling out the pointy rock straight between the eyes of the giant, who immediately collapsed. David was crowned king and would be celebrated in many other artworks as well. Michelangelo’s David in Florence is undoubtedly the most famous one. The artist worked on this statue of 5,17 meters high (16,96 ft) for over three years, making the whole sculpture out of one block of marble. 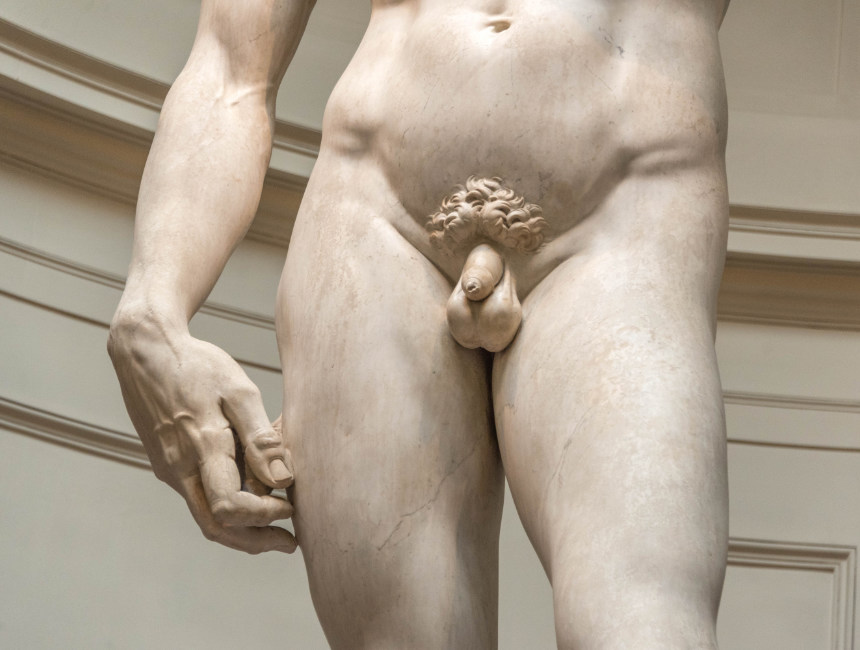 Several body parts are clearly out of proportion. And I’m of course referring to its right hand!

Where can you see Michelangelo’s David?

Originally, David was part of a series of prophets, to be placed on the roof of the cathedral of Florence. Nevertheless, it was decided to exhibit the sculpture on a public square, just outside the Palazza della Signoria, the seat of the civil administration in Florence. Because Michelangelo’s David depicted a true hero, the statue soon became a symbol of the Republic of Firenze itself. This city state, you must know, was threatened by many rival states for its wealth and prosperity.
Because of this everlasting competition with other states, David’s eyes were even aimed at Rome, the second most powerful state of the country. In 1873, David was moved to the Galleria dell’Accademia, where you can still see it. On the original location you can now see a replica. 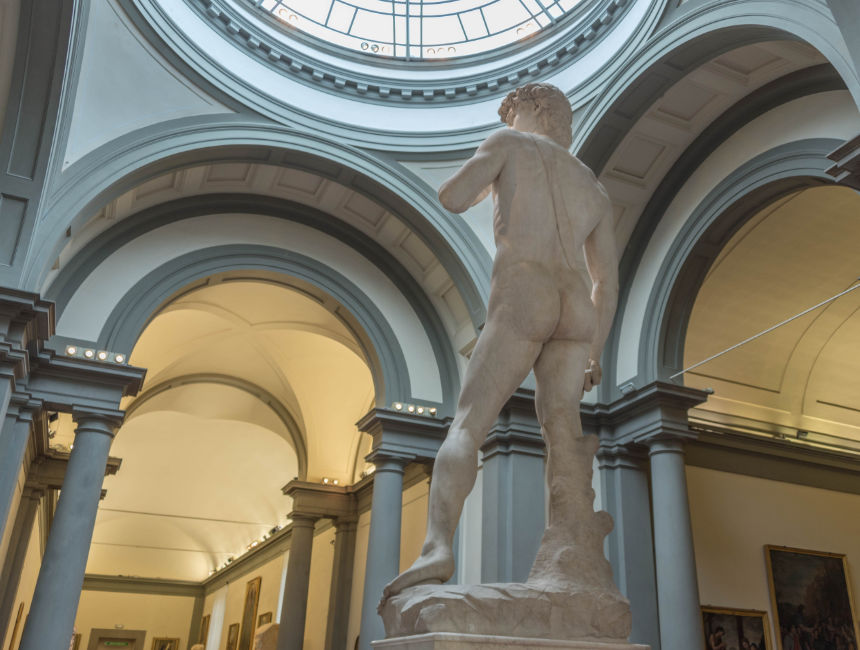 It really is impressive how beautiful and graceful this sculpture is. Don’t forget that this statue was made without any modern techniques or tools!

In addition to the David in the Galleria dell’Accademia, you’ll also find a magnificent sculpture next to the Palazzo Vecchio and a bronze sculpture on the Piazza Michelangelo. If they are just as impressive as the real sculpture, I’ll leave for you to decide… 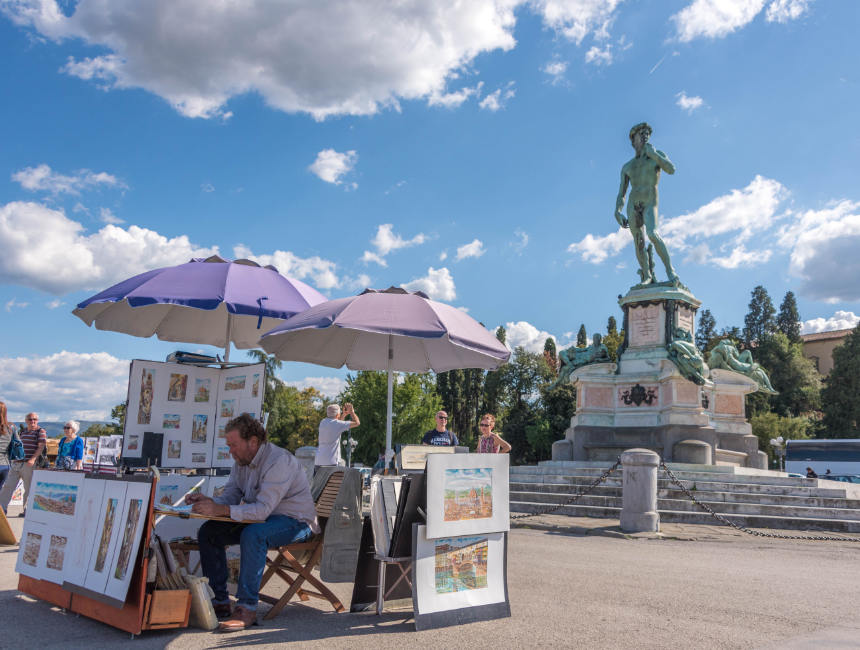 The David on Piazza Michelangelo. David doesn’t look bad in bronze either!

If you want to see Michelangelo’s David in Florence, you must visit the Galleria Accademia. If you buy the tickets in the museum yourself, you’ll pay 8 euros per person. Please note that this is the most visited museum of Firenze, and that it’s not uncommon to wait in line for a couple of hours (look at the picture below …). Fortunately, you can also buy a skip-the-line ticket for the Statue of David and the rest of the museum (€16 or $18,50) without losing time standing in line.
I recommend buying a ticket with a guide included. This costs about twenty euros, but it makes your visit so much more interesting!

For combination tickets, skip-the-line tickets and guided tours, check out these options:

» All tickets for the Academia 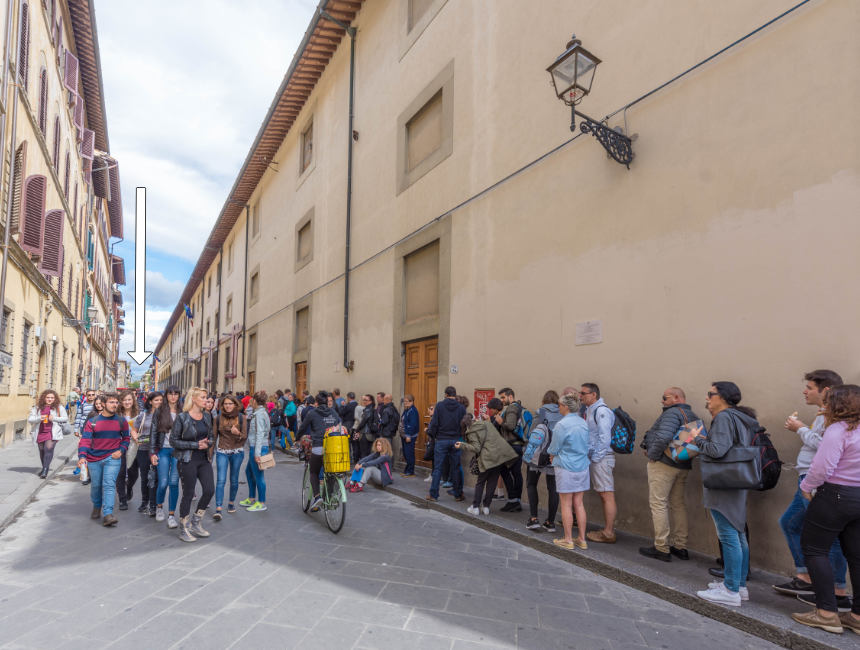 The waiting lines for the Galleria Accademia. The white arrow is where the entrance it, at the corner.

Also worth mentioning is the Firenze Card.
If you stay in Florence for three days or more, this may be a smart purchase. With the Firenze Card you can enjoy 72 attractions in the city for 72 hours.
With this card, after payment of € 72, you have free access to all these activities. In addition, you also have priority access to all museums and churches (including the Galleria dell’Accademia and the Uffizi!) Ánd you can climb the Duomo of Firenze.

As I stayed in Florence for four days, I bought this card on my first day and I could easily pass this long queue. I waited a whopping five minutes before I got inside and could inspect Michelangelo’s David from up close. I think this card is definitely worth the money if you plan on visiting quite some museums and sights. 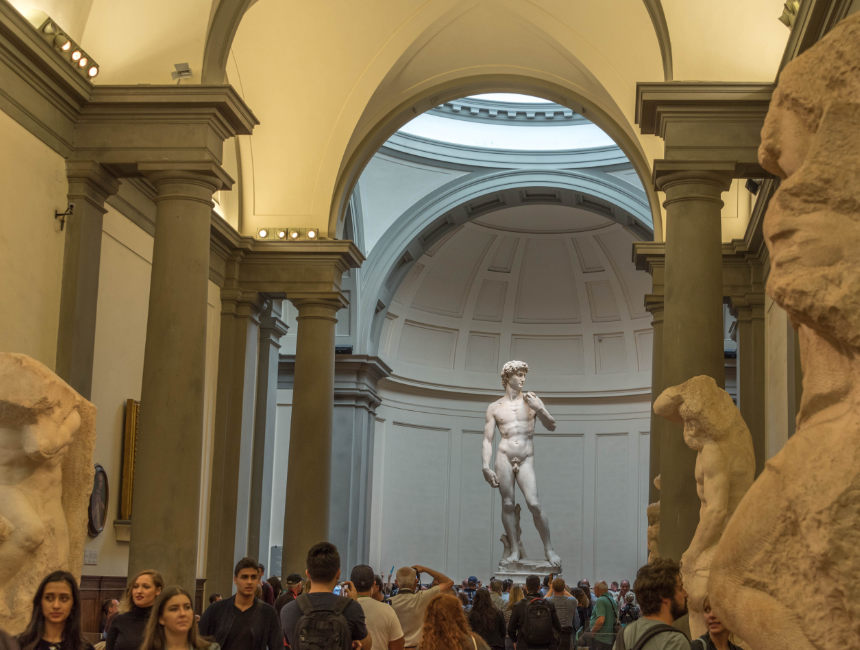 David is very centrally located in the museum, and most visitors immediately head to the pedestal where he’s showing off.

Michelangelo’s David is so important to our art history that you can’t leave Florence without seeing him with your own eyes. Florence has so many other things to see, so you will definitely need a couple of days to explore this city. This makes the Tuscan capital a great destination for a city trip or as a part of your Italian road trip! 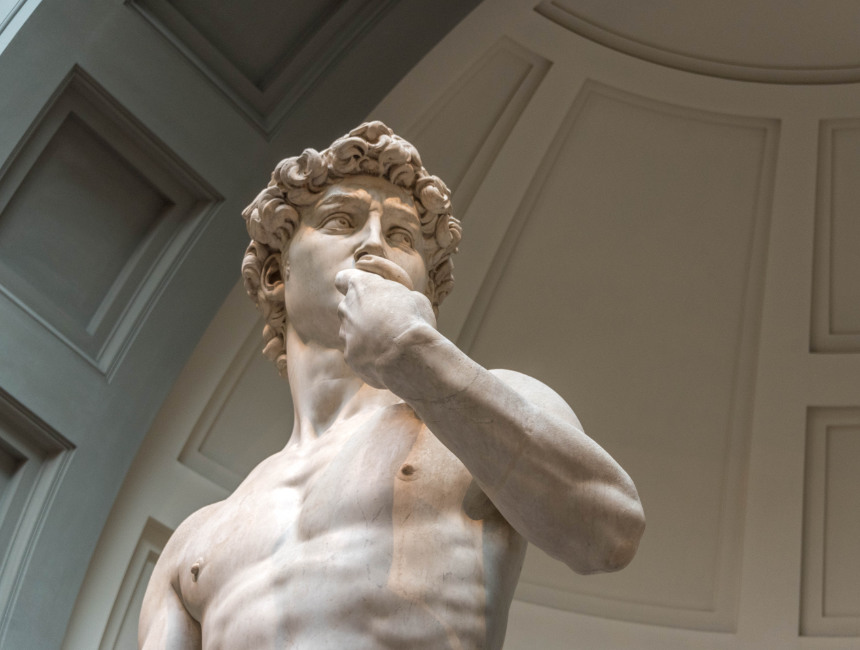 The one and only David can be seen in the Galleria Accademia of Florence. But there’s plenty of other David’s to be seen in this city!