Naples is one of those holiday destinations that is becoming increasingly popular, and it's the ideal city for a city trip. At least as interesting as what can be experienced above ground, is the underground city and the catacombs of Naples. I would like to tell you what you can see here and why you should not miss this spectacular sight!

Book them with recognized tour agencies (€9) 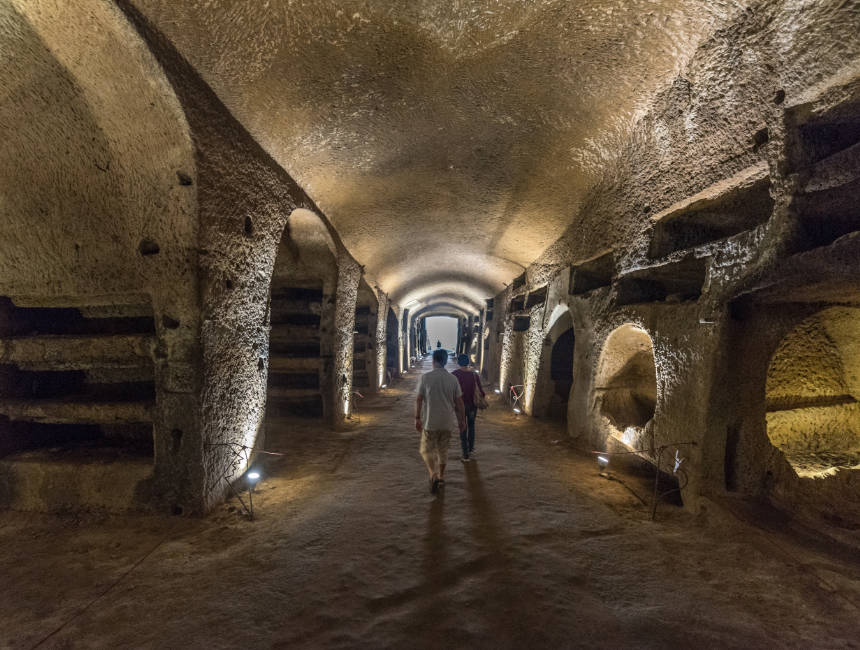 The catacombs of San Gennaro

This is the most famous attraction of underground Naples. The first thing you’ll probably notice during a visit is that the catacombs are much larger than the (more) famous catacombs of Rome. This has to do with the workability and strength of the tuff, in which they have been excavated.
Originally this was the tomb of a noble family, dating from the second century. Soon it was extended and final resting places were provided for the Christian community.
In the fourth century, the mortal remains of St. Agrippinus was added, the first patron saint of Naples. In his honor, an underground basilica was built (with a ceiling of almost six meters or 20 ft ) and this is part of the lower catacombs. The catacombs of San Gennaro also contain a higher section in which bishops were buried. You’ll also find some of the first Christian paintings from the south of Italy.
In the meantime, you probably asked yourself how these catacombs in Naples got their name. If this patron saint of Naples is burried here, why were the catacombs then not named after him? The answer is simple: Naples has 52 patron saints and San Gennaro is the most popular and loved one. He was originally the Bishop of Benevento and was beheaded for his beliefs. In 472, he became patron saint of Naples to prevent diseases and volcanic eruptions. It is said that in 1527 he stopped the plague and in 1631 prevented the eruption of Mount Vesuvius. As they say in Italy: se non è vero, è ben trovato (if it’s not true, it’s at least a good find)! 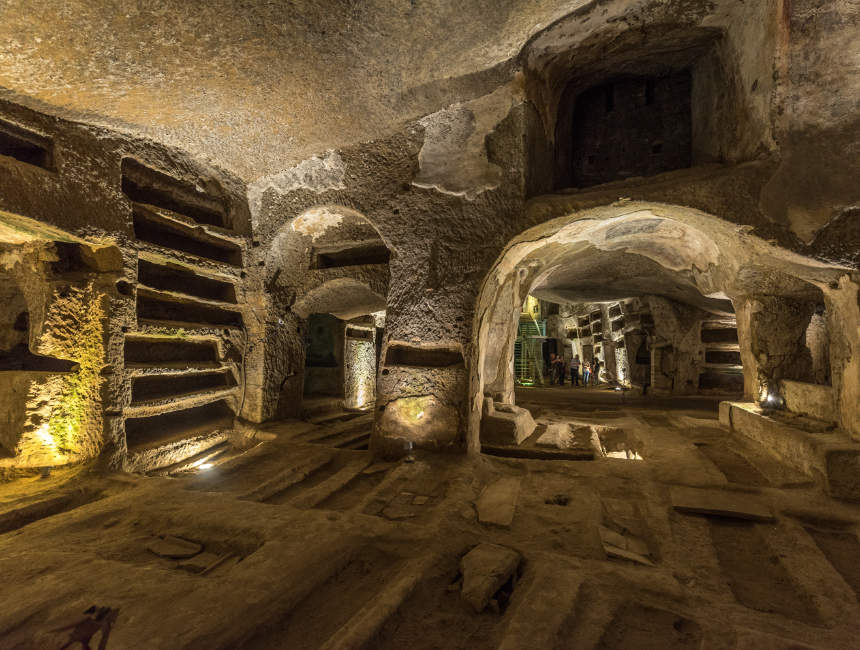 The San Gennaro catacombs are the largest in Naples and have an impressive history. 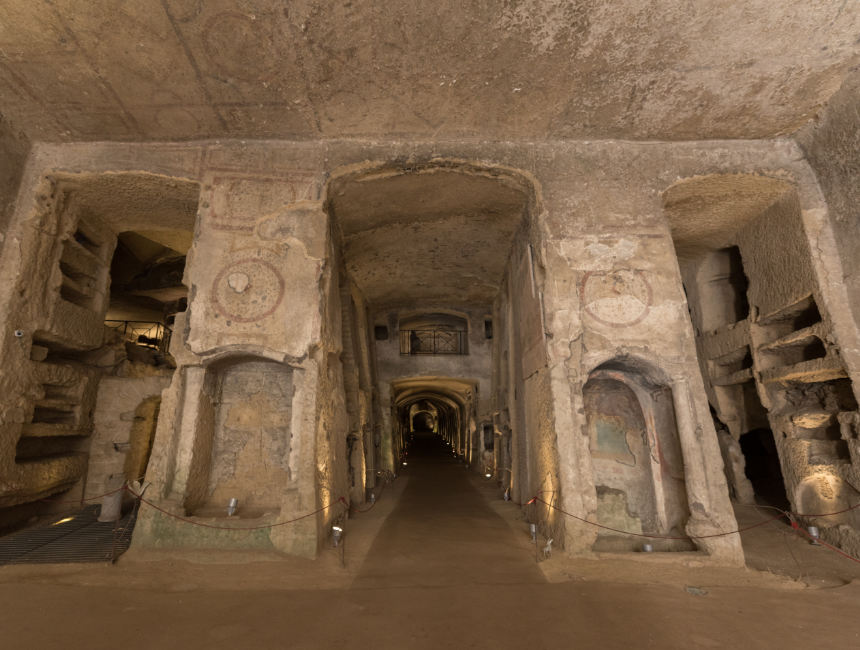 These underground corridors seem to be infinite.

The catacombs of San Severo

San Severo was the twelfth Bishop of Naples (between 363 and 409) and lived in a time when Christianity was threatened by paganism and arianism (a movement within Christianity). Despite this precarious situation, he succeeded in strengthening Christianity and became the spiritual father of Neapolitan Christians.
He also founded four basilicas of which only two are known: the San Severo outside the city walls and the San Giorgio Maggiore inside the walls. In the latter you can now find his remains, these were moved from his catacombs to prevent theft.
The catacombs of San Severo itself date back to the fifth century and were only discovered in 1867. Of the original catacomb, only a small, almost square room is left entirely carved out of tuff. The arcosolium (small grave with an arch) does contain some beautiful frescoes. Unfortunately they are currently closed for the public, but you can visit the basilica of San Severo instead (and free).

Gaudiusus of Naples (or ‘the African’) was bishop of Abitina in Tunisia. Coincidentally he ended up in Naples and after the invasion of the Vandals he refused to convert to arianism. King Genseric was furious because of this and sent him, along with some other exiled Christians, away on a ship without sails or oars. Another famous exile was Quodvultdeus, the bishop of Carthage. He too was buried in catacombs, but unlike Gaudiusus he was placed in those of San Gennaro.
After Gaudiusus died, he was buried in a graveyard outside the city walls of Naples and this cemetery soon grew into a place of piety. At that time, the underground Christian cemeteries were also extended and, over time, they grew into the catacombs of San Gaudioso; the second largest in the city.
Here you can see early Christian elements such as the tomb of St. Gaudiosus and the frescoes and mosaics from the fifth and sixth centuries, but also special graves of noblemen from the seventeenth century. 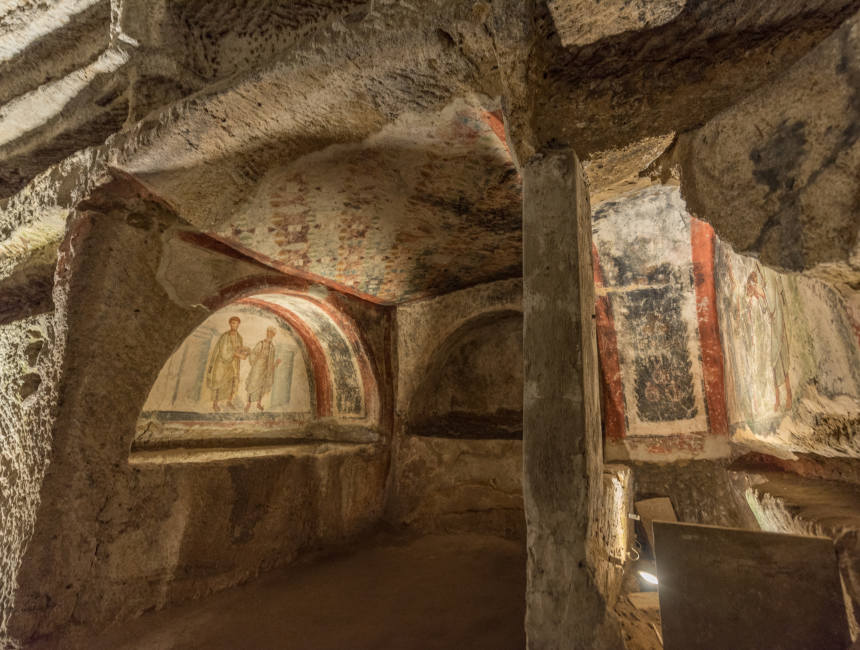 Whatever catacombs of Naples you visit … There is a lot to tell about them!

The “Underground Napoli” are in fact not catacombs, but one of the most impressive sights of Naples and therefore almost a mandatory visit.
Forty meters (131 ft) below the lively streets of the historic city center you’ll find a totally different world: according to many, the heart of Naples.

During a visit you travel back 2400 years in time and you’ll see a number of things that you wouldn’t immediately expect in the underground.
The first impressive sight is actually a Greek-Roman aqueduct that provided the city with water for no less than 23 centuries.
Furthermore, you still have shelters where the Neapolitans hid for their safety during the bombings of the Second World War. Thousands of people lived here semi-permanently during the war. There are even some underground showers and ‘toilets’ that remind us of these times.
This is complemented by a war museum and the Hypogeum Gardens: a real underground vegetable garden!

Along the way you’ll see beautiful rusted-old timers. Beautiful vehicles that were used by the Mafiosi in a past not so long ago. You’ll even spot a giant truck in these underground corridors!
During your tour, you also visit the remains of the Roman theater where Emperor Nero had his private dressing room, for when he performed in Naples.

Besides the traditional tour you can also plan a more active visit, where you can climb through the narrow caverns and kayak on an underground pond!

Rusty cars and scooters with lots of bullet holes… In Napoli Sotterranea you can find thousands of years of history! 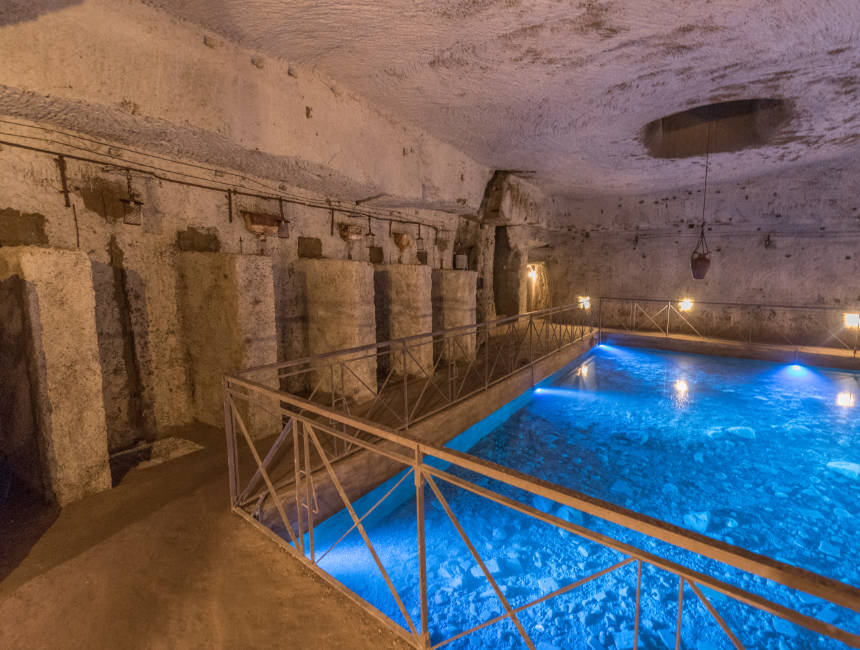 Showers, an underground pond, … It seems luxurious, but it was anything but that during the world war!

The Fontanelle cemetery is a charnel house located in a cave in the ‘Materdei’ part of the city.
When the Spaniards took up residence in Naples in the sixteenth century, they were already worried about where they could build cemeteries. Many Neapolitans refused to be buried outside the city walls, causing funeral directors to move a lot of remains to this cave outside the city.
In 1656, during the Great Plague, thousands of anonymous victims of this epidemic were added to this lugubrious collection. Almost two centuries later, in 1827, it became the most important cemetery in the city after the cholera outbreak.
Fast forward to 1872 when the priest gave Gaetano Barbati the order to dig up and catalog these chaotically buried skeletons.
Suddenly there was a real cult that dedicated themselves to these nameless corpses. Followers believed that they showed respect for those who had never received respect during their lifetime. They cleaned up the remains and even adopted them. On top of that, they even built a small church, Maria Santissima del Carmine, at the entrance of the cemetery.

Nowadays there are more than eight million bones, so there’s definitely something to see here! Along the way you’ll notice some strange -sometimes it even reminded me of voodoo!- scenes. There are many Jesus figures, dried flowers, cards and … Even an underground church with some God-fearing statues! 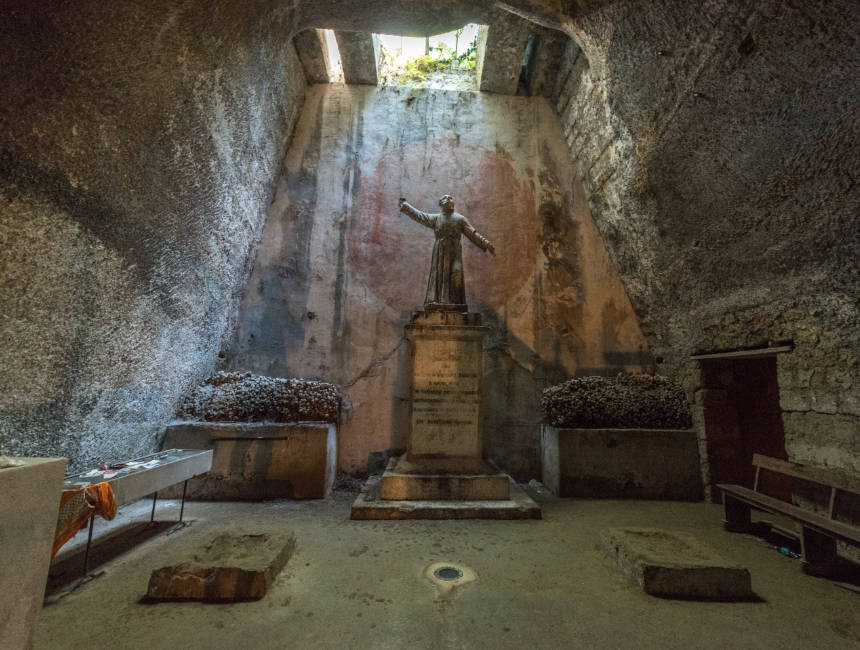 It’s quite spooky, but at the same time very impressive!

Which catacombs in Naples you choose ultimately depends on your personal preference. They are all unique in their own way and every underground cemetery is a new discovery. I found them definitely one of the most special sights of Naples.

Would you like to see the catacombs under Naples with your own eyes? Book your tickets now: