Petra had been on my bucket list for a couple of years already now. This ancient wonder of the world in Jordan seemed incredible to behold, but because of its location in the Middle East, I never really thought of going. Because of my positive experiences in Israel and Jordan (yesterday) I decided to no longer be scared and visit this gorgeous place anyway. After a short night's sleep in the Beautiful Seven Wonders Bedouin camp we journeyed to the mysterious Petra... 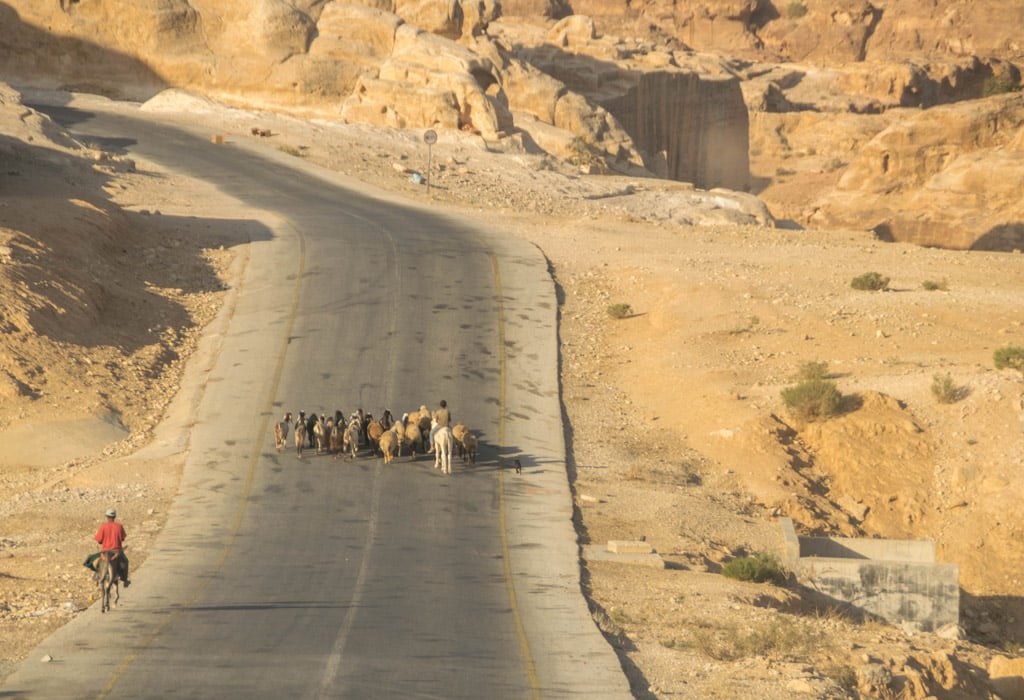 A funny view while we were on our way to Petra.

Around eight thirty we arrived in the former capital of the Nabataeans. The entire city stretches over several tens of kilometers and is entirely carved out of red sandstone.
Due to aging, erosion and heavy rain a lot of the former houses and tombs unfortunately already collapsed or disappeared. But fortunately there is still plenty left to view and take in!

The Jordanian government know that this is a huge draw for tourists and thus they don’t mind asking for a high entrance fee. For one day you pay 50 JD for two days 55 Jordanian Dinar and for three days 60 JD.
I think two days is certainly enough to explore Petra from head to toe. One day may just be too short…

Our group tried to arrive as early as possible and that for several reasons. Firstly, it is not that hot yet and you can walk around with a more relaxed feeling (+ you look fresher on your pics, because otherwise you WILL be sweating on every single pic). As a second advantage, there are much less people in the morning, so you can enjoy this beautiful historic place even more, as if you’ve just discovered it yourself.

After a brisk walk from the entrance gates, you’ll enter a giant rock formation which made me think back a bit of the Grand Canyon. The red sandstone climbs a few tens of meters in height and creates a gigantic shadow surface. The undulating walls keep on going for almost two kilometers and are completely carved out by Nabataean work forces. Here and there you can already see a remnant of their great civilization. A religious symbol or a hole in which the Bedouins hid away. The carved gutters were also very visible. They made an ingenious system of gutters that guided the rain water into large tanks carved into some of the caves. Even in the desert, where water is so scarce they never had a drought!

Sofia, Carmen, Oscar and I were amazed by the grandeur of this city. If you search for more information or look at pictures from Petra, you often see one single tomb. But the whole area is so much more! 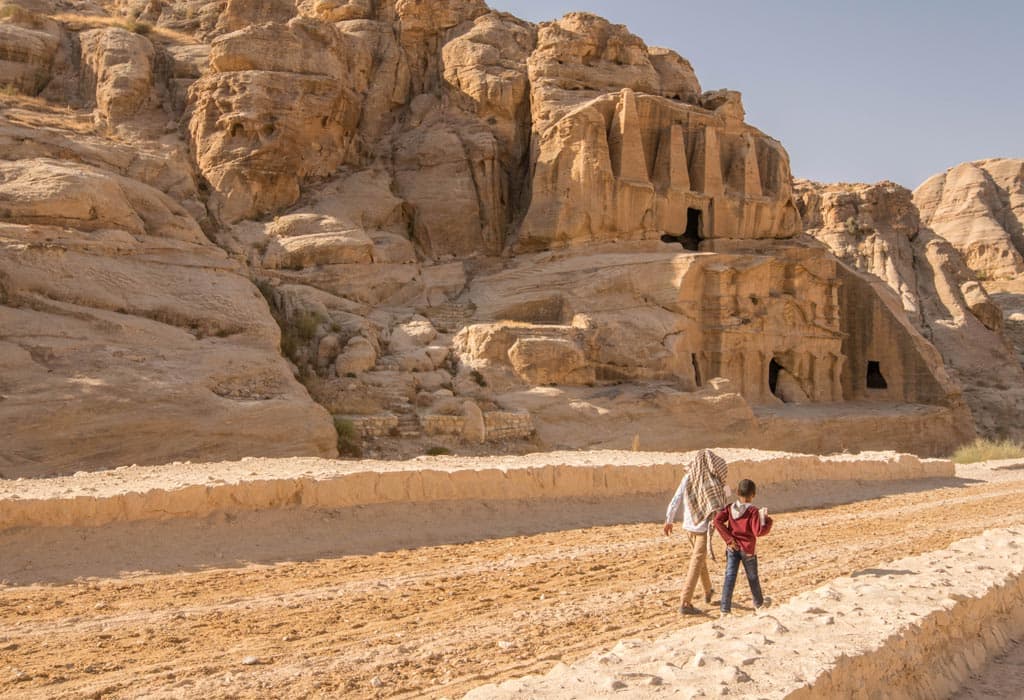 Before you get to see the city, you have to walk a little bit more. 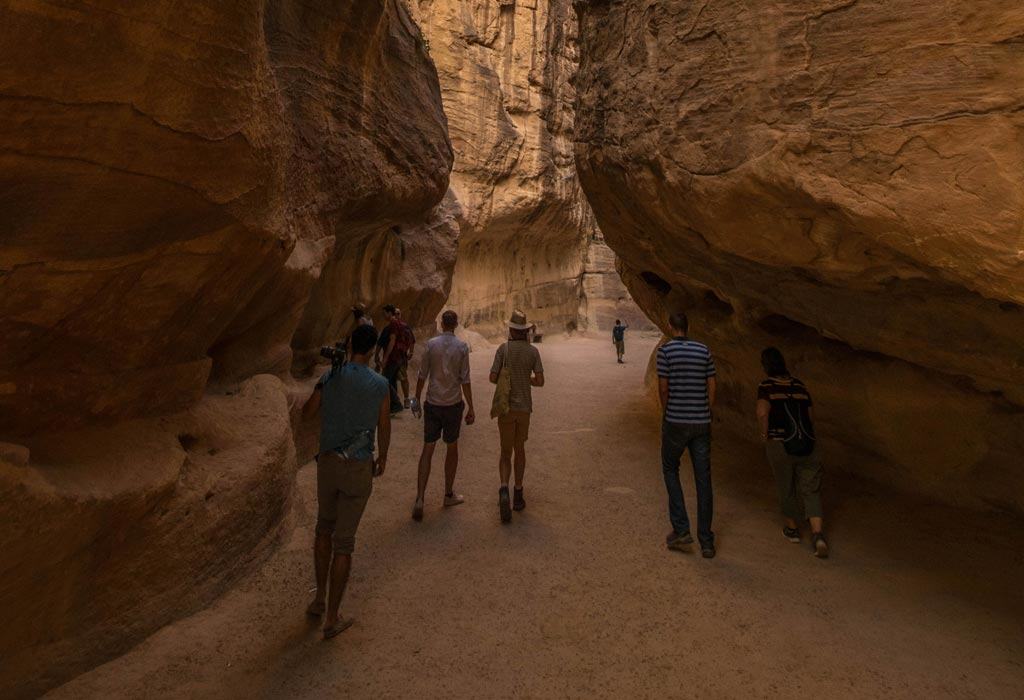 The caves go on and on and once were abundant of life.

The treasury or ‘Khazneh’

The most famous monument of Petra you see popping up in every tourist brochure is of course the treasury or Khazneh. Once you have stepped through the open cave, you go to a grand vast square. Straight ahead, you see the magnificent treasury.
We were among the first tourists who arrived here today and the Bedouins quickly came to us asking if we wanted to sit on a camel or donkey in front of the building to snap some pics.
After we had admired the magnificent tomb for a little while, my Spanish-speaking friends and I decided to pose for the camera on a camel.
For 7 Dinar we could each make a short ride on the camel with enough time to also make some pictures. As icing on the cake we got ourselves some extra time to make some pictures with two camels together. (I had to have some nice souvenirs with my new friends, of course!)
A good tip: always try to bargain if you are planning to sit on a camel/donkey. Besides us, I heard a couple who agreed to pay 10 JD. We paid 7, but I’m sure we could’ve had it for less.

Our guide told us that this had to be a tomb for a very prominent person. The huge monument was indeed intended to lay only one person to rest.
Left and right you see all kinds of divine figures which should facilitate the gateways to heaven or hell.
Not long ago, archeologists had also discovered that there is a meter deep ‘basement’ that was part of this tomb. This additional floor was intended for sacrificing rituals. A long hollowed stone pipe was made for blood to flow to this place. Moreover, there were also many other things found which were used for sacrifices, like the corpses of some animals, some incense, … 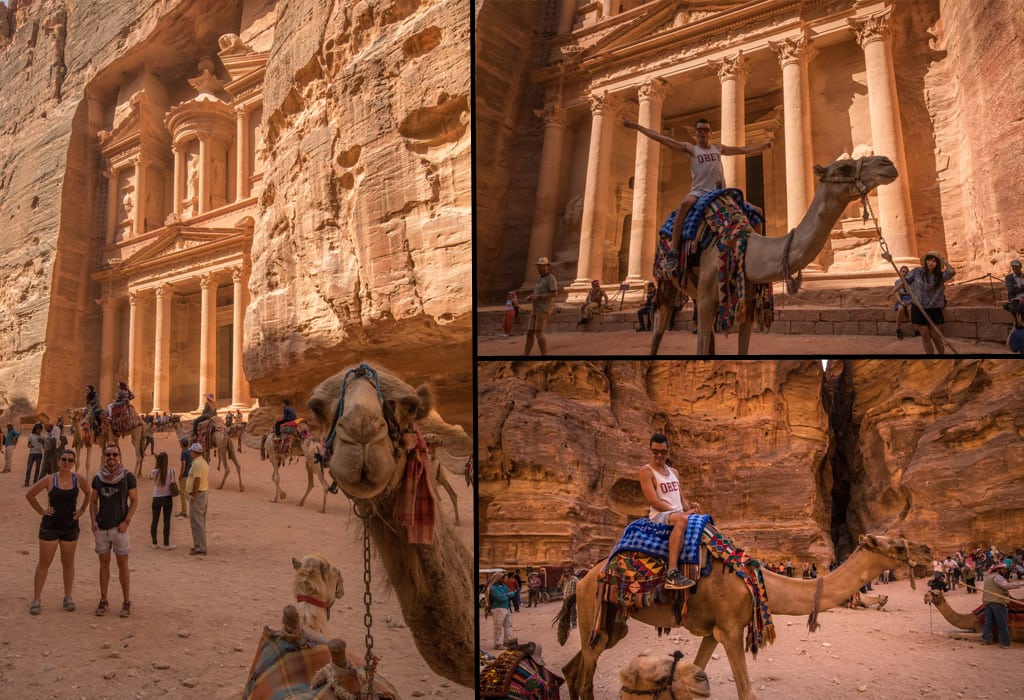 The treasury of Petra. Perhaps the best known temple of Petra!

Forty five minutes later, there were already a lot more people around this central square. Together with our guide, we went on to explore the rest of Petra.
We had now left the caves behind us, because now the narrow hallways were exchanged for wide-open spaces with beautiful views. Here and there we saw Bedouins with their camels and donkeys and shops to sell something to the many tourists.
Behind them, the gigantic tombs loomed where the desert gypsies rested and kept cool in the shade.

While I was sitting down, looking around, Oscar and Sofia took me to a shop. “Try it! It’s super cool! “They said.
“But what is it?” I asked.
“Just do it!”

Naive as I was, I plopped down in the chair and suddenly the bedouin owner of the shop stood in front of me, with what seemed like a sharp pin.

Before I could say anything he began to put the needle very close to my eyes, and he started to give me a line of mascara. The desert gypsies use a pitch-black product to make their eyes appear very dark.
Everyone laughed, and I cursed them in the Spanish swear words they had taught me the day before.
Luckily I was not the only one who got a makeover, because all of them also went for a smoky eyes look.

With our guide, we climbed a little further up to enter some other tombs, and at half past twelve we left this magical place again. Sad that it had just been a quick visit, but still happy that I could see so much of it at all.

The latinos and I decided to save our powers for the end, and we hired a donkey to return to the treasury. We spend 5 Jordanian Dinar to climb on the animals back. It is often read that the animals are abused, so at first I wasn’t very keen on climbing on the donkeys back. But honestly… I couldn’t see any sight of abuse. The donkeys weren’t hit once, and they didn’t have any wounds on their bodies. That assured me that the Jordanian government did something with the complaints they had from previous visitors to Petra.

After a final -DELICIOUS – Jordanian meal, we got back on the bus. Tonight I would arrive at one of the holiest cities of the world: Jerusalem! 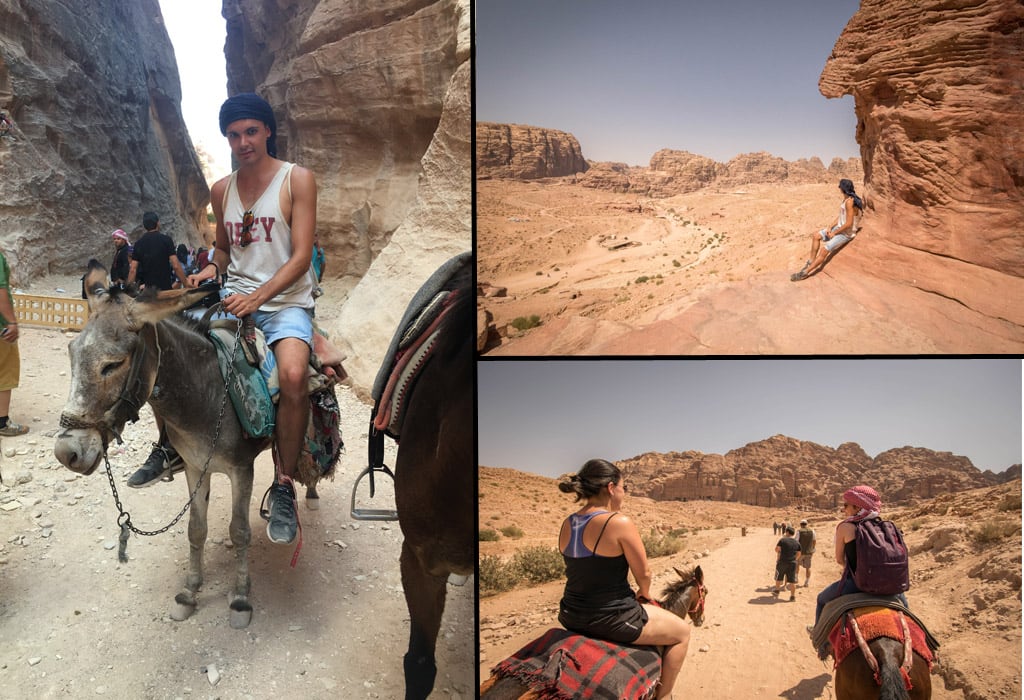 I think I would fit in nicely in a bedouin camp, or wouldn’t I?