A new day on the beautiful Lofoten Islands!
Unfortunately the clear blue skies we had yesterday seem to have disappeared, but all in all we couldn't sulk. The Lofoten Islands are in fact known for very capricious weather, and if we could trust the forecast, we would have some great days in front of us.
Today we got up early, because it was a long ride to two of the most beautiful spots of the Lofoten. In virtually every travel brochure and travel blog, there were mentioned two hotspots you should not skip on this archipelago. Reine and Å. 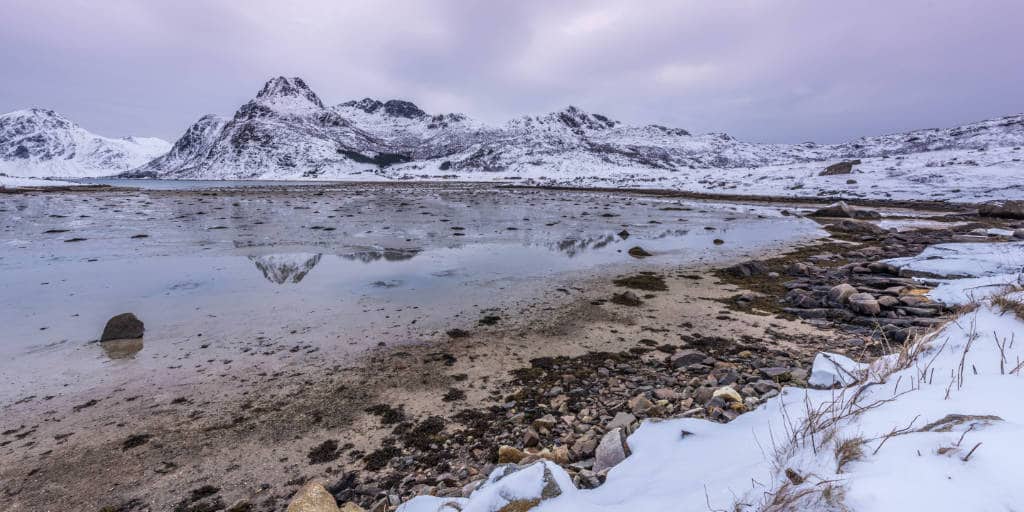 Driving to Reine and Å can be difficult at times! It’s not easy to keep your eyes focussed on the roads when there’s so much to see!

The scent of the Lofoten

Today we left much earlier so that we would have plenty of time to see everything we wanted to.
Although we took exactly the same route as yesterday it was often hard to keep my eyes on the road. The nature in Norway is breathtakingly beautiful, and you always see something new appearing!

Just over an hour later, we arrived on some yet undiscovered roads. The roads twisted and curled along beautiful snowfields, hilly landscapes and lakes which reflected all of this beauty on their surfaces.

We couldn’t resist to park the car whenever we pleased –sometimes a little dangerous– to inspect all the natural beauty from up close.
Every time we got out, we smelled the typical scent of the Lofoten. A salty fishy odor.
The further south we drove, the more pungent it got. 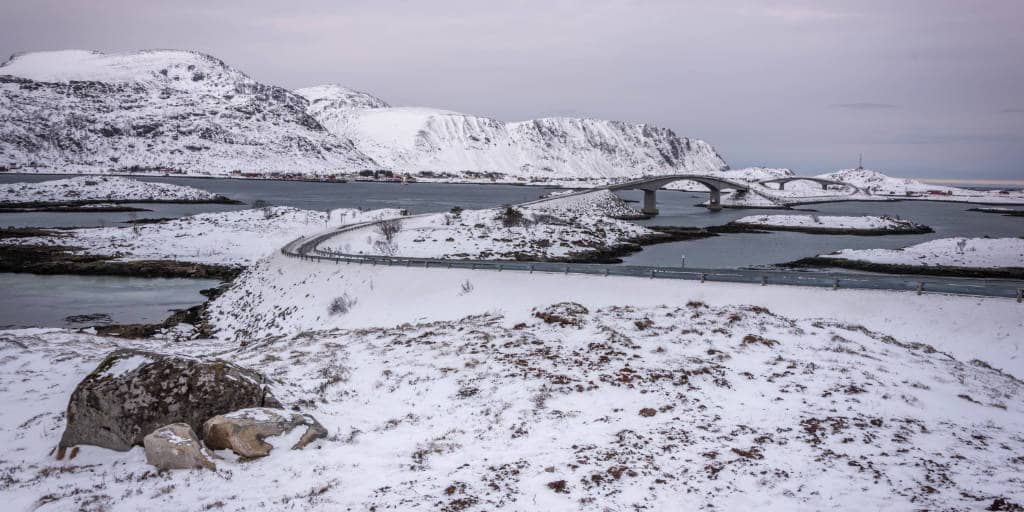 The many small islands are connected with long bridges.

In the distance we saw hundreds of weathered, wooden constructions standing right next to the water.
We were very curious and we couldn’t resist the urge to stop and look what these strange structures were exactly.

This time, I parked the little car nice to the side and when I got out my olfactory senses seemed to go awol.
I had never smelled such a penetrating scent in my life. A mixture of salt and acid washed over us.
The not-so-sweet smell came from the strange wooden pyramids, which were planted down in large numbers right in front of us.
From the upper beams dangled thousands -hundreds of thousands – severed fish heads.

The fish looked at us with wide-open eyes and gaping mouths and occasionally some guts hung from their heads swaying back and forth.
The closer we came to the gigantic fish heads, the stronger the smell got.
You know that feeling where you quickly get used to a particular scent? Well, you didn’t get that here.
The odor didn’t lose its sharpness at any time. 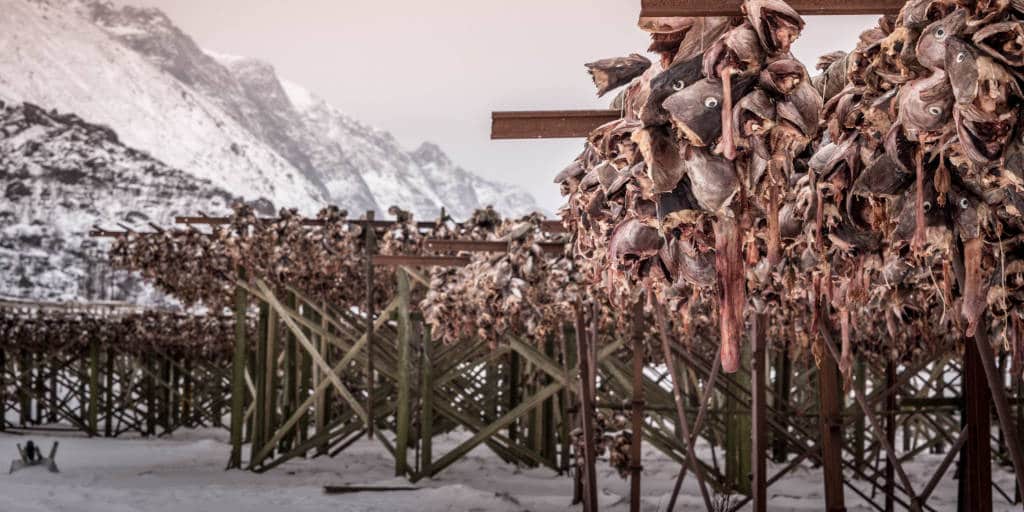 What a scent and what a view! I don’t think I would enjoy walking around here at night!

It’s quite an eerie sight, but at the same time I found it a fascinating piece of culture.
Stockfish has been a tradition for thousands of years in Norway. The fish are hung out to dry for days or weeks until they are edible. Once ready, they can be preserved for years.
Stockfish was at one time so popular that Norway became filthy -literally- rich because of the fishies.
The heads are mainly used in fish soups, but they get equally used as food for your beloved four-legged friends.
The dried bodies are only consumed by humans and for many Norwegians they are in fact a delicacy.

While I was fascinated by the dismembered corpses, I didn’t realize that my jacket was slowly being colored red by blood droplets falling down. It was only after I got a drop on my forehead that I disgustingly jumped from underneath the drying racks of fish.

Well… Nobody ever said making beautiful pictures was easy!

We left this battlefield and laughed a but more about my clothes, now soaked in blood and the unmistakable smell of stockfish. 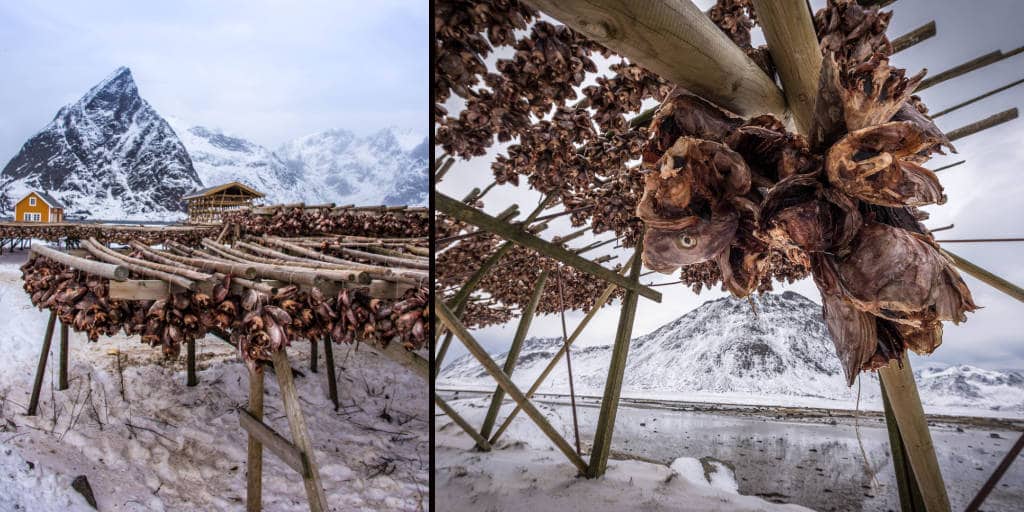 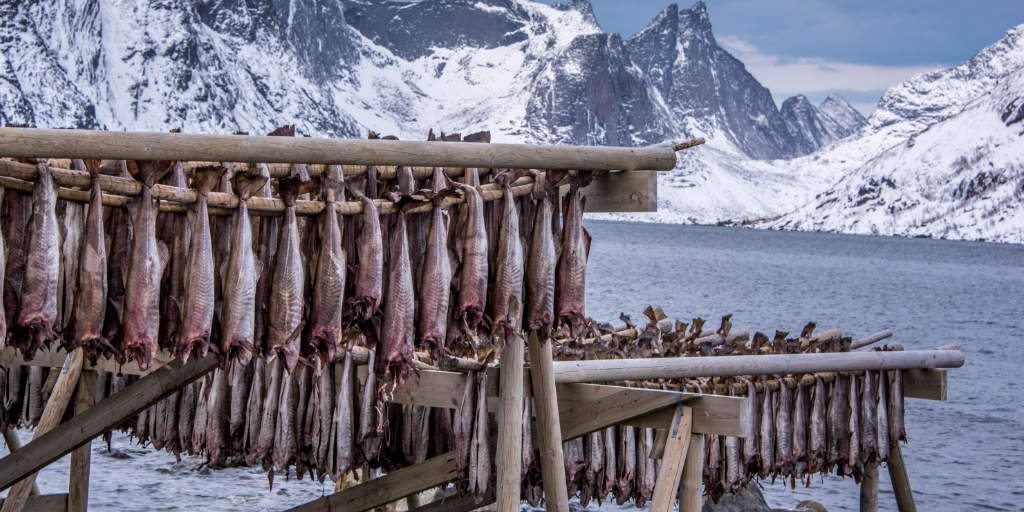 The bodies of the fish (do you see how big these are!) are dried until they’ve become the famous Norse delicacy.

When we drove on we could almost see no landscapes anymore without the typical wooden stockfish pyramids.

Not much later we got on towards the southernmost parts of the Lofoten islands (with the exception of a few smaller islands that you could only visit by boat).
The landscape changed again and the shore suddenly looked a lot rougher.
The vast, snowy landscapes were now exchanged for jagged offshore rocks, narrow roads and wild swirling water. We drove under dozens of tunnels and every time we returned into the light, we were surprised by a new, wild panorama.

After a very sharp bend, we came across a lovely town with some wooden rorbu’s (Norwegian stilt houses). Again, A lot of stockfish were welcoming us with their salty smell.
I parked the car to take some photos of the yellow houses, and as I walked along a narrow bridge, I heard several dozen seagulls squawk loudly when they saw an otter sneakily walking out of the water.

The salty sea air, the rugged coastline, the screeching seagulls and the strong winds. Ah! What a wonderful feeling it is to be in Norway! 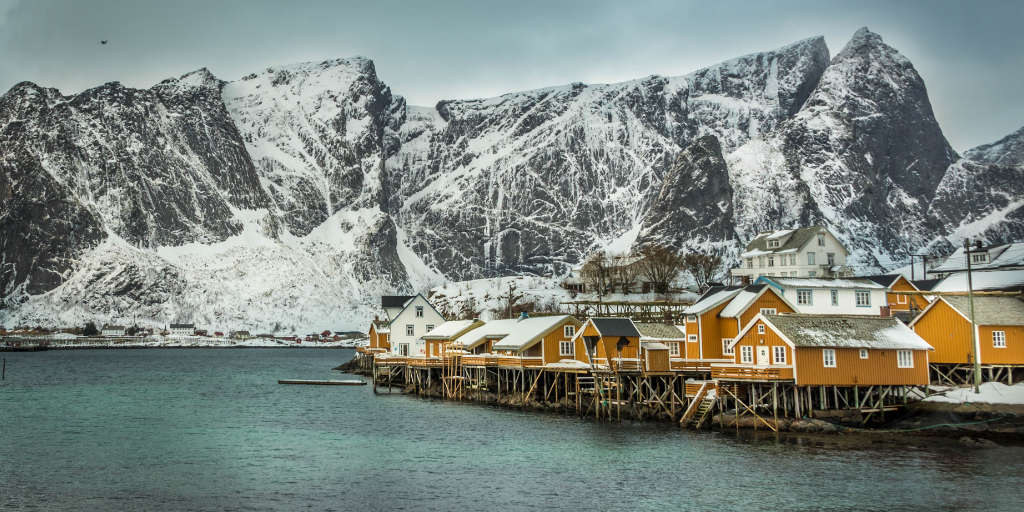 A couple of miles from Reine, we arrived at this charming fishermen’s village.

A few sharp turns later we arrived at the viewpoint above Reine. Arguably the most beautiful village in Norway. From the viewpoint you get a panoramic view of Reine and the surrounding landscapes.
Dozens of red and white houses that partially stick out the water, surrounded by snow-sprinkled hills. I think it would be wonderful to live in such a beautiful town! Beautiful nature, cute houses and nice and quiet.
Maybe a little too quiet for me! But I would definitely not say no if anyone invited me to spend a few days here.

After we had peeped at the beautiful fishing village from above, it was time to head down to the city.
Once we got to the center of the town, it appeared to be even smaller than I had imagined before.

A small tavern in the middle of the city attracted our attention.
Inside, the store was filled with all sorts of items and decorations to decorate your interior, but it was also a small pastry shop.
The delicious smell of cakes and sweets filled the room and soon my mother and I spoiled ourselves with some Norwegian specialties.
Another hot little tea and coffee later, we stumbled outside, all warmed up.
With our little car we climbed back up for one last time today. Our final destination: Å. 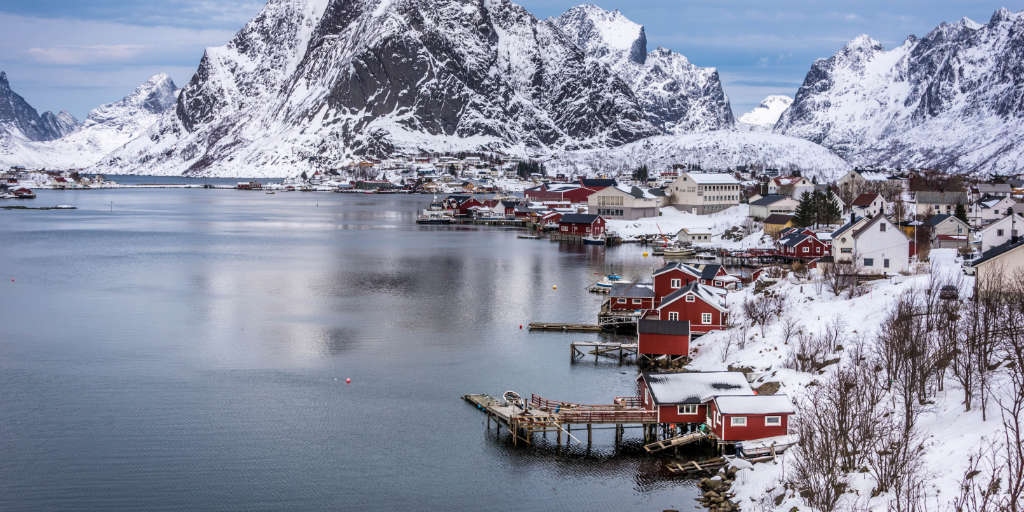 Many say that Reine is one of the most beautiful villages in Norway!

Big smile! You don’t always get to see such cute villages 😉

The people of Å clearly didn’t have a lot of inspiration while picking a name for their village!
Fortunately, the view of Å is a lot less bland than the name might imply.

The tiny village is almost entirely built on rocks and so it’s impossible to head on there by car.
If you just continue to follow the track from Reine, you will eventually end up at a fairly large car park with across it -what else- dozens of rows of dried stockfish.

From the parking lot we went down to the center of Å.
One restaurant, one campground, one hostel and one museum (The Torrfisk museum – for all who want to know more about stockfish!).
There may not be much to see, yet you can walk around for a while. Because what you can see is pretty phenomenal. 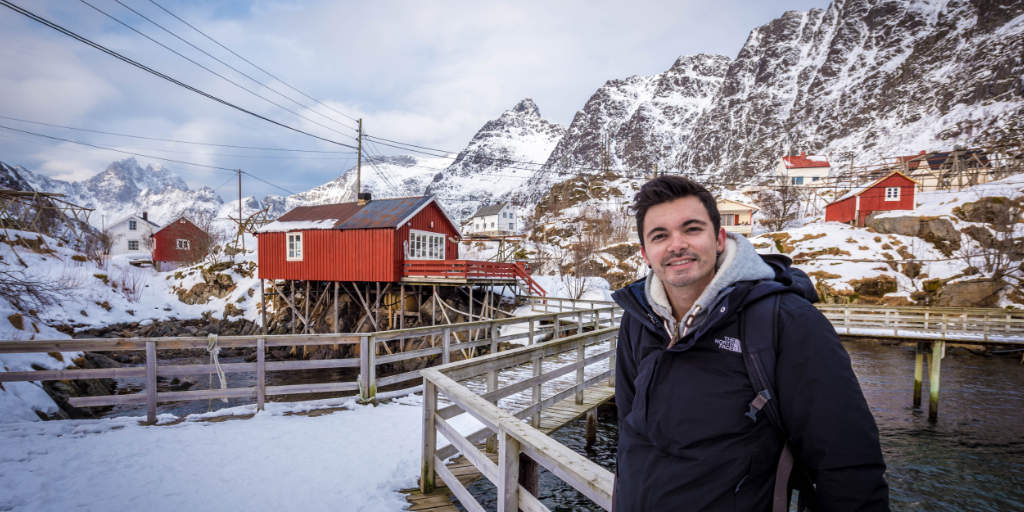 Car can’t head through Å, and that makes this village so appealing!

Almost all cabins are red and some are dangling over the water.
The soft creaking wooden bridges connect the low-lying huts with those that were built slightly higher.

Although clearly not many people live in Å, the village is always busy. Not so much because of the tourists, but because of the hundreds of birds screeching and whistling while trying to claim their place in one of the abandoned houses or ubiquitous rocks. 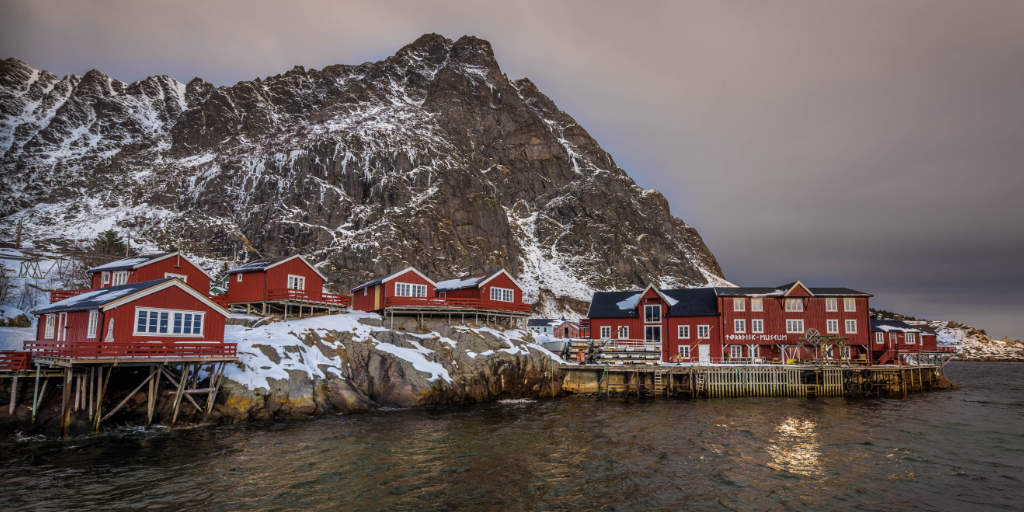 With the sun slowly but surely splashing into the sea, we left Å and Reine. Today was so far the best day on the Lofoten islands.
Our week in Norway was almost over and we hadn’t seen the northern lights yet. Tomorrow we still had one chance, and the weather looked good. Very good!