Just a little over a year ago, it was my first time in Norway. The beauty of this Scandinavian country enchanted me and I couldn't get the idea to return out of my head anytime soon. Since I am still slightly addicted to travel, it didn't take very long before I again went to the capital of the north to see the stunning scenery and enjoy the relaxing atmosphere. 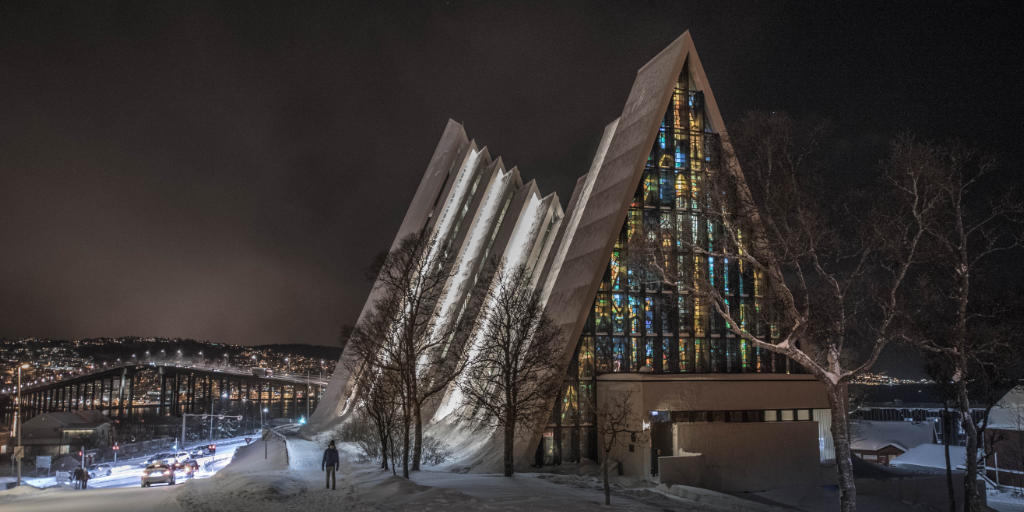 The Arctic Cathedral of Tromsø. Isn’t it a beaty?!

Flights from Brussels to Tromsø are no fun. What normally would take about four hours, now takes double. Three planes and a lot of waiting time. Because the last few months I kept obsessing about Norway to my mother, she decided to travel with me to this beautiful country. I wasn’t worried, but I was thinking about the thick snow and the active trips. Would she be able to do those? We would be trudging through the snow all day, and the freezing temperatures and icy winds aren’t exactly a dream for most of us!

The last time I was in Tromsø, I arrived in January. In last year’s blog posts you might’ve read what little sunlight there was back then.
With knowing this in the back of my head, I was quite surprised this time! The ever dark scenery I was used to almost bathed in non-stop sunlight! At half past eight in the morning the sun began to heat up the city, and this until half past six in the evening!
Good news! Because this gave us a lot more to explore in one day.

Just like last time, we also took the Flybussen to the city center. For a single ticket we paid 90 NOK (63 NOK if you buy them online in advance). Outside it was already pretty dark when we landed, and so unfortunately we couldn’t see much of the beautiful snowy landscapes surrounding us.
Luckily the center was well lit and we could thus get a first impression of this lovely town. With our suitcases we trudged through the snow and ice-covered streets. All this was even more difficult by thick snow falling from the rooftops quite regularly, as well as some giant icicles. Yayks!

After two last hurdles (snowy and icy stairs and a wall of snow which seemed to pull us in) we finally arrived at our little lodge: The ABC hotel. Tiny rooms, but in a cozy environment and with a large kitchen. Self-catering in Norway will save you a couple of hundreds of euros in a week’s time! 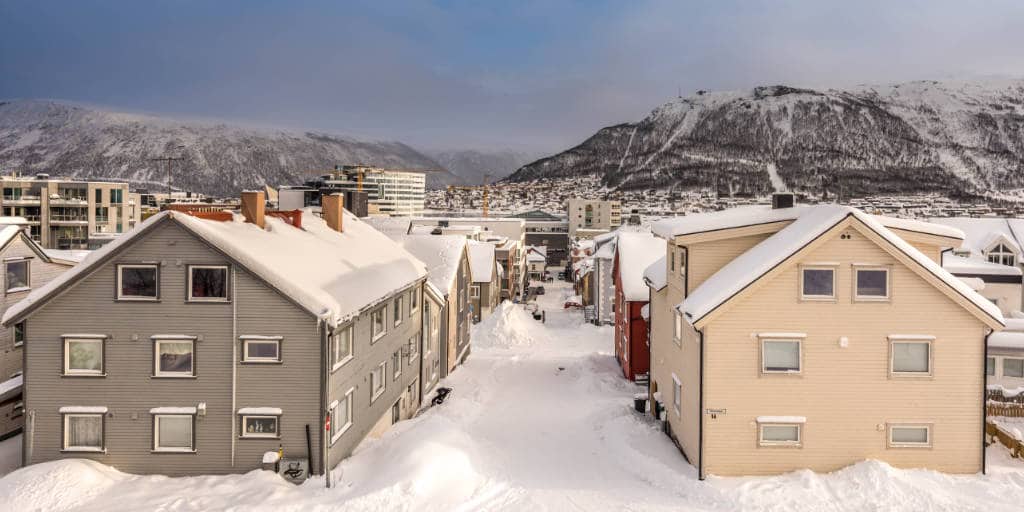 The city center of Tromsø. Thick snow and probably the coziest atmosphere ever!

A T-shirt, a sweater, another sweater, one more sweater and a jacket. If you want to keep warm in Tromsø you have to dress in many layers. My mother didn’t feel very steady on the frozen ground and took –good idea, mum!– crampons with her. So she was much more stable on her feet.
The town of Tromsø is very cozy. Picturesque houses, a pedestrian street with many shops, cozy -expensive- coffee bars and all the water surrounding the city. Tromsø is situated on an island surrounded by many other islands, so you’re constantly surrounded by ocean currents.

I had already seen Tromsø of course, but my mother was amazed at how ordinary life here was like. The same luxury as in Belgium, cars speeding while driving on ice and snow, bikers plowing through the white stuff, joggers getting rid of some extra calories… There’s no better example than here: Mankind knows how to adapt themselves everywhere!
After a warm coffee, tea and shared kanelbullar (Yummy!) for only fifteen euros, we decided to explore the rest of the island. 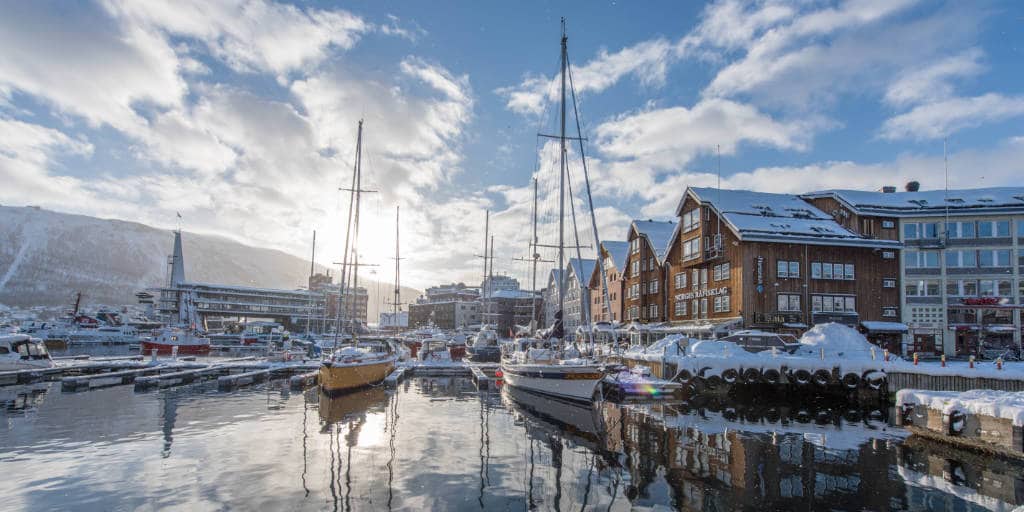 Tromsø is in fact a small island and is thus surrounded by a lot of water. Here you can see the port of Tromsø.

Last year I went to the beach of Tromsø with the Dutch Danique.
Strange perhaps, but there are indeed a couple of beautiful beaches this far north! The sand is mostly covered with thick snow, but because of the tides you always have a small strip of sandy beach. So you see … Even in Tromso you can have a beach holiday! 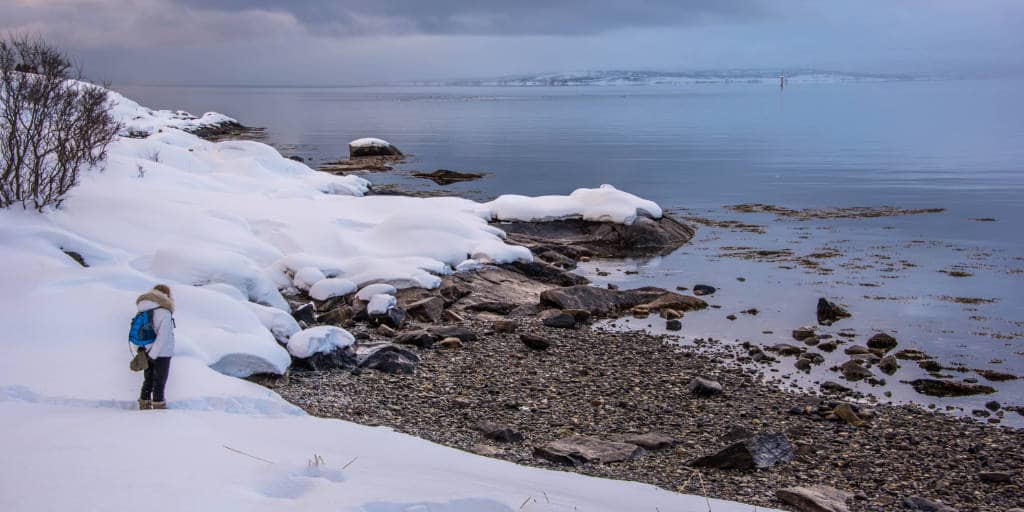 Snow white beaches? You can find these in Tromsø as well!

Right behind the Tromsø Museum, you can walk through a small piece of wood that eventually takes you to the west side of the island. Here you can climb through the thick snow and enjoy the many birds and the clear water that keep the beaches free of ice.

Two hours later -and an exhausted mother- we had walked the whole beach, so we decided to return to the center. During our walk the snow kept pouring down, and right before we entered a cozy coffee shop, we looked like living snowmen. 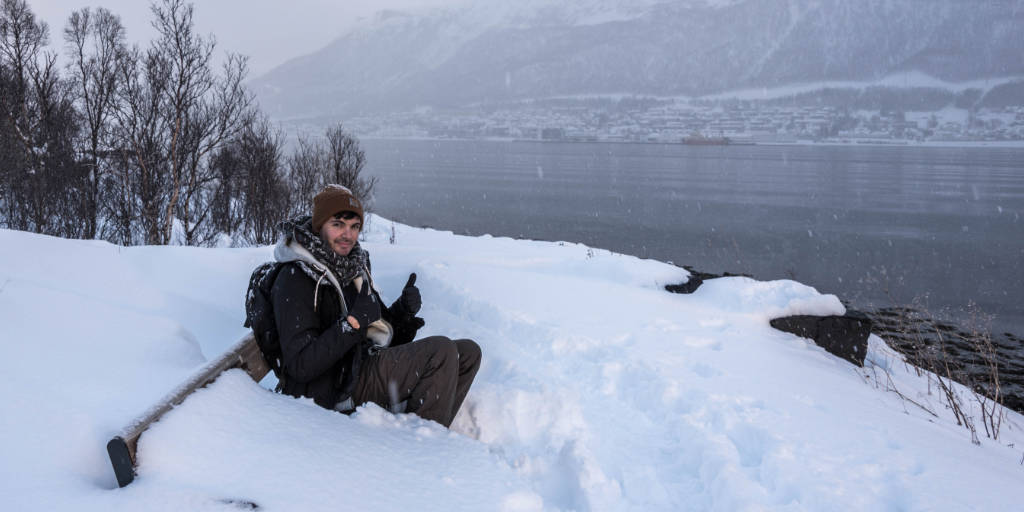 A walk at the beach can be tiring, so it’s important that you sit down now and then.

Once we completely thawed, it was again an hour later and we had to head to Fjellheisen.
Fjellheisen is the highest point in Tromso that you can reach with a short ride on the funicular. From these snowy hilltops you get a nice view over the capital of the Arctic and also a breathtaking view of what lies on the other side of town.

For 170 NOK we were raised hundreds of metres in just a few minutes. We were just in time to see the amazing skyline of Tromsø! 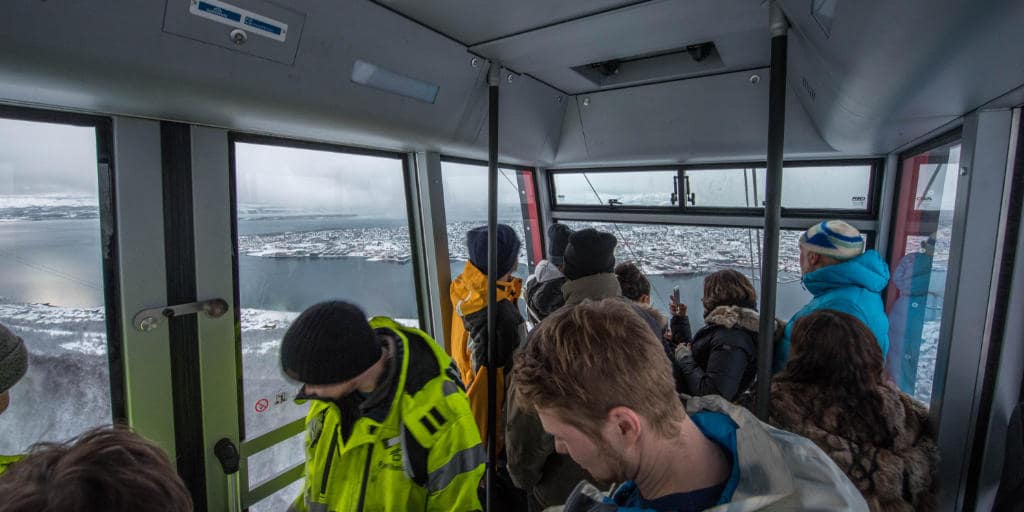 In mere minutes you get hoisted to the top of Fjellheisen with the funicular.

Because the daylight began to make way for nightfall. Unfortunately there were a lot of clouds which made it a little difficult to spy on the city from this height, but fortunately the other side of the mountain was largely cloud-free! 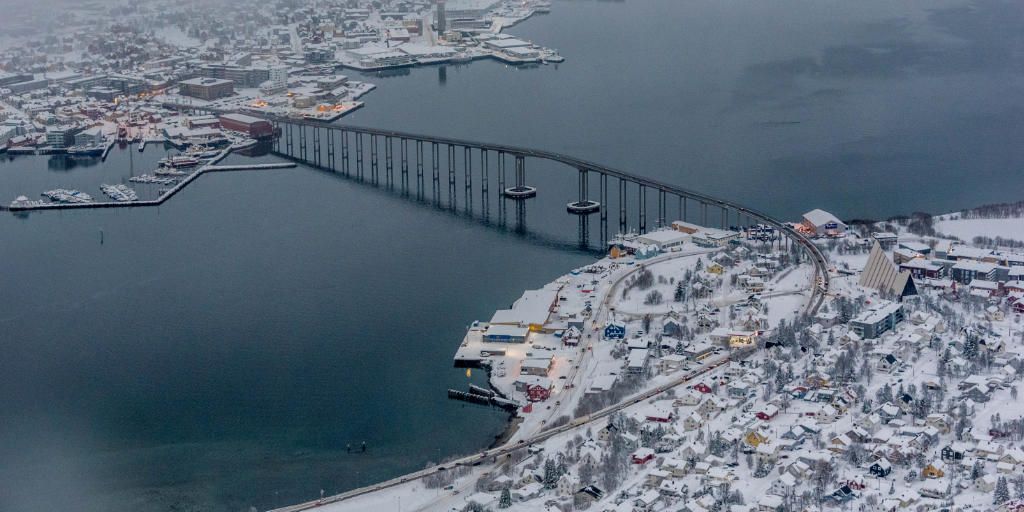 If you want mind boggling views over Tromsø, you have to head to Fjellheisen.

Because of the everlasting clouds, I decided to just slog through the thick snow (Heavy work!) And to admire the other peaks of Tromsø.
I was obviously a bit too excited because with my happy jumps through the snow I wasn’t aware that one of my new camera lenses had fallen into the snow… Luckily I found it back quickly because the fog began to head in my direction and the skies got ever darker.

With my lens firmly clamped between my hands, I decided to return to the station from where the cable car returned, and I accompanied my mother in the pub before we commuted back to the city.

Tired of this weary day we walked the last miles for tonight, ready for an unforgettable day in the morning. We go dog sledding with huskies after all! 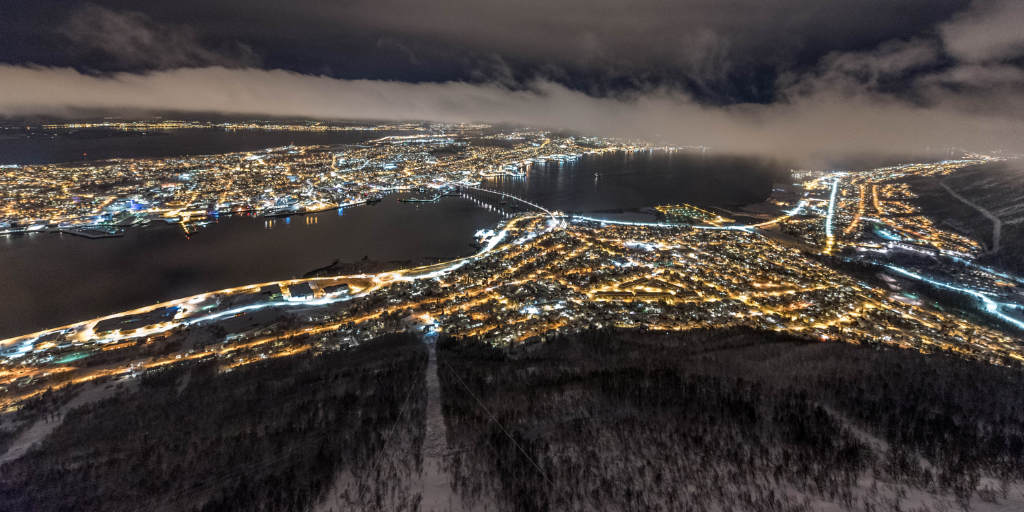 Warmed up and with my camera lens safely tucked away, I walked outside one last time. Wow!