My adventure in the Baltics is almost over. In just over an hour I drive over the Latvian border into Estonia and a few hours later, I arrive in Tallinn. The capital of Estonia! It immediately strikes me that Tallinn is the "most expensive" capital of the Baltic states. Expensive is perhaps not the right word, because compared to Belgium, the city still is very cheap.

For two euros I take the tram and fifteen minutes later I arrive at my hostel for the next three nights: the United Backpackers Hostel.

Cheap, clean, friendly staff. What would a backpacker want more? Earplugs maybe, because my two neighbors seem to organise a snoring contest every night. Well… Staying at youth hostels doesn’t only have advantages! 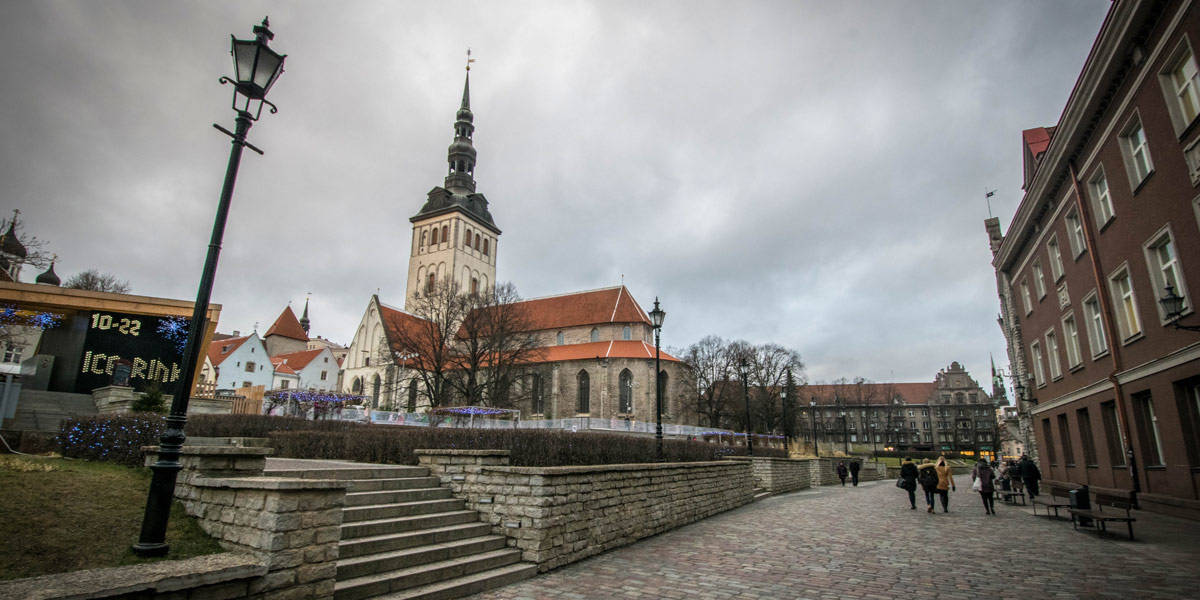 It’s true what they say. Riga is clearly the biggest capital of the ‘Baltics’. But you can’t call Tallinn small either. Perfect for a city trip! The historical center is the most popular destination for most tourists, but just beyond there are also some interesting spots.

The hostel is on the edge of the old town and in a few minutes walking, I have walked through the former ramparts.

The Vabaduse Väljak, with its large monumental cross welcomes me first. A large, empty square, with the exception of a church, where I immediately get a nice view of the city which I will explore in the coming days.

Tallinn clearly has many churches (but not half as much as in Riga!) Because I can see their domes and roofs already towering above the city.

The Aleksander Nevski cathedral is a beautiful orthodox church with a black, bulbous dome.
Like most Orthodox churches that I saw on this trip, the outside especially is quite pretty. Inside, they look nice, but definitely not exceptional.

The Toomkirik looks like a church that could be found in Belgium as well, except that this building was the highest building of Europe for a very long time. Before there were modern skyscrapers of course… 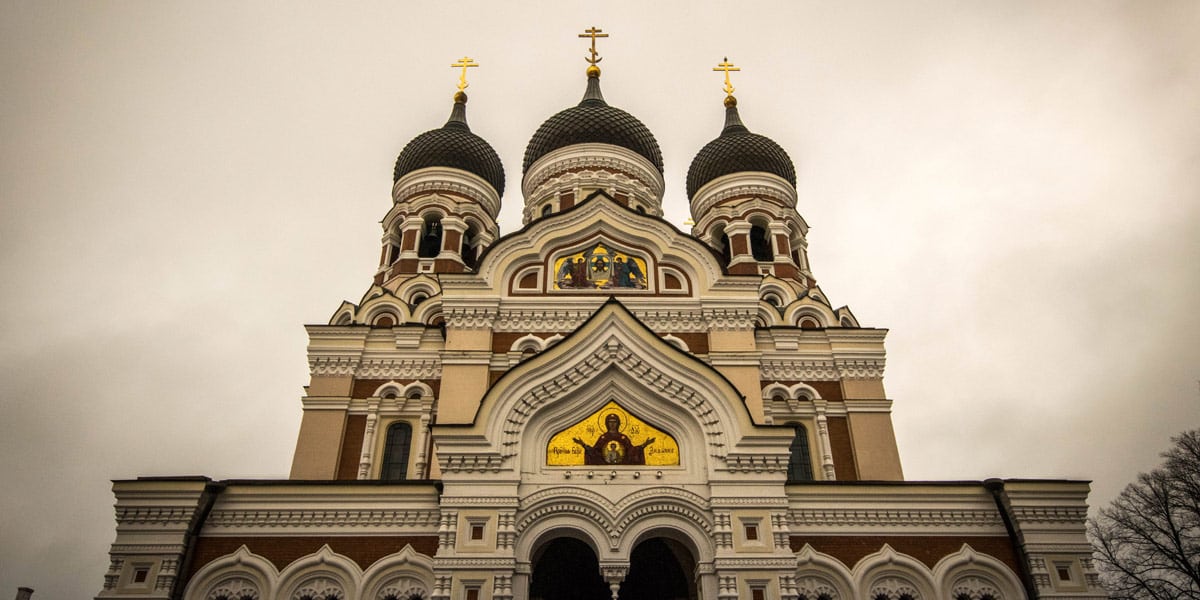 The Alexander Nevski cathedral towers over the city! 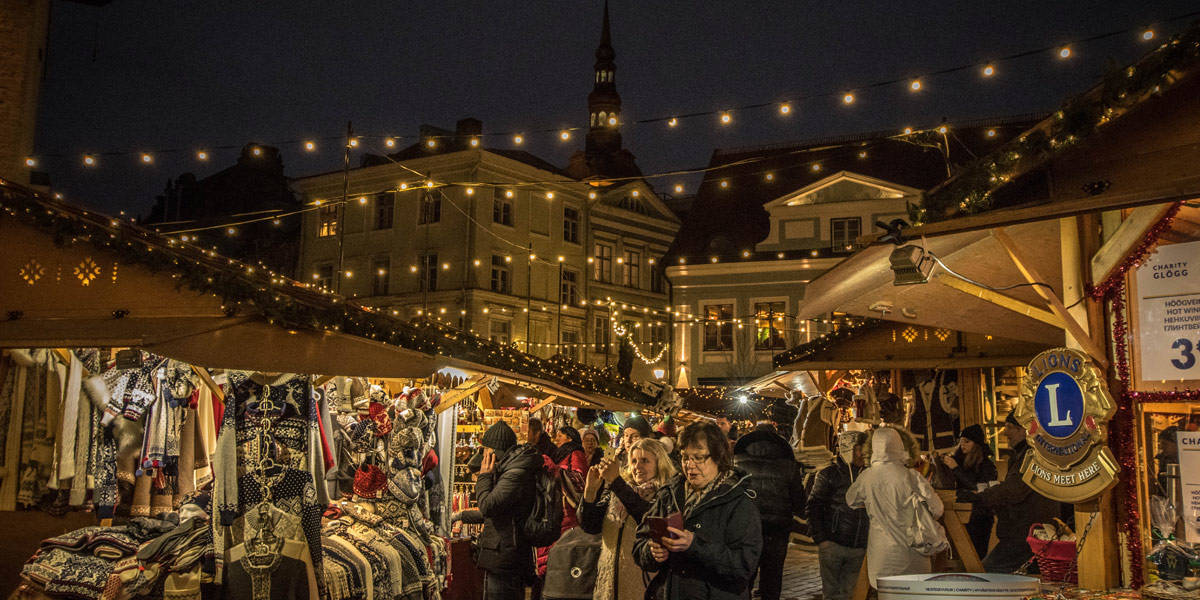 The christmas market in Tallinn. Lovely to see and a nice atmosphere. Especially with these wintery temperatures!

Christmas is getting closer and the effects of that you can see clearly even in the Estonian capital. Cute Christmas markets, beautiful decorations and sometimes a a decorated tree. Some more original than others.
The smell of pancakes, waffles, mulled wine and sauerkraut take over my senses, combined with cheerful Christmas songs I soon stop complaining about the cold temperatures and just enjoy the nice atmosphere of the town.

If you just walk through the alleys and cobbled streets of the Old Town, you’ll soon get to see some beautiful squares, buildings or other landmarks that will undoubtedly be wordshipped by many guides.

The city sometimes gets a little steep, but for the most part it stays flat. From the highest point (Toompea) you get the best views over the historic city.
There are in fact two viewpoints and they are close together. Kohtuotsa and Patkuli.
Kohtuotsa gives you a nice first impression of the city, but personally I found Patkuli slightly more impressive.

It was definitely no beautiful weather, but maybe this time that was an advantage. The persistent rain made a big fog cloud settle down over the city, making the highest church towers vaguely disappearing into the white mist. Mysterious and dreamy! The perfect setting to dream away at the history of this cozy town. 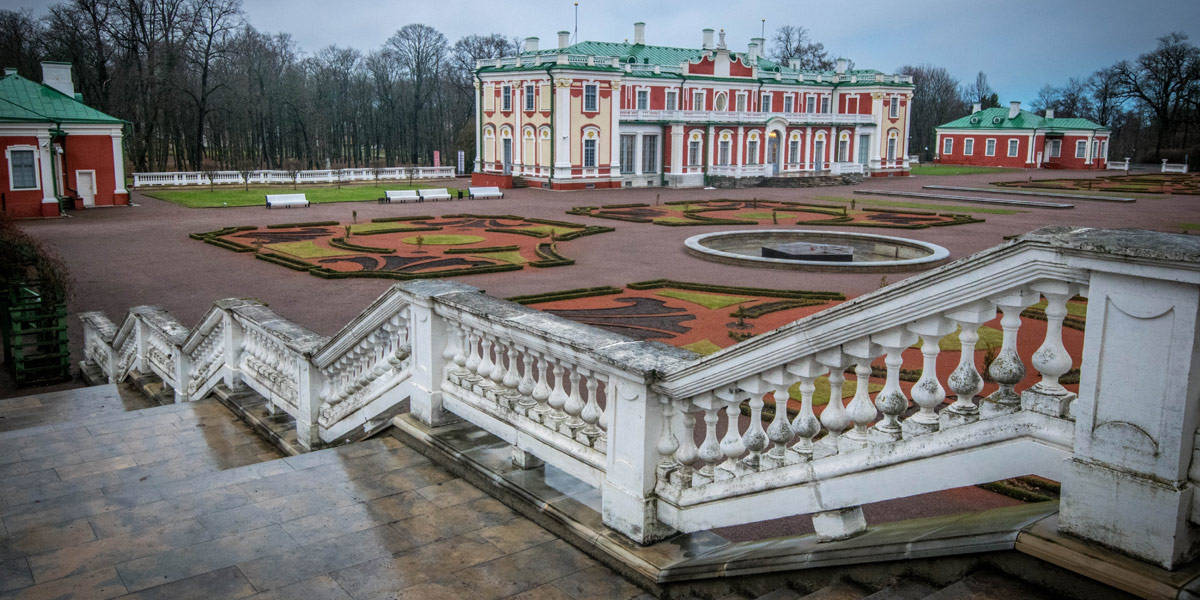 The Kadriorg palace, just outside the bustling city center. You can walk there or take the tram.

Sights outside the old city

The old town is quickly seen and in rainy weather, i’s always nice to stay warm in museums.

Furthest from all the other attractions is the kadriorg palace. A beautiful building with even more beautiful gardens in the middle of a huge city park.
The beautiful interiors (and museum) can be visited at a low price, but the view of the majestic façade and the garden are free.

For boat and plane lovers, the Lennusadam museum is a must. A giant hangar –with a rich and interesting history – certainly read its history once you are in the museum– which has been converted into a modern, entertaining museum.

Your attention probably immediately shifts to the great submarine which was hanged in the middle of the room. I don’t understand how people can work in such a small, uninviting rooms. Often months at a time and then also in an escalating war situation… I would prefer a cruise boat I think!

After a few minutes it was also enough for me and I was glad I could leave this technical masterpiece and went on, looking at the other exhibits.
Personally, I thought the information about the underwater minefields quite interesting. What a gigantic things, pfooh!
The whole museum is packed with facts, but it doesn’t offer boring or unnecessary information. And honestly, I liked that.

Moreover, there are also some nice areas where things become more interactive, and so the museum immediately gets accessible to the kids too.
Outside you can find a few boats which you can learn more about. War boats, fishing boats; basically all kind of boats. And with your ticket you can also take a look inside them. 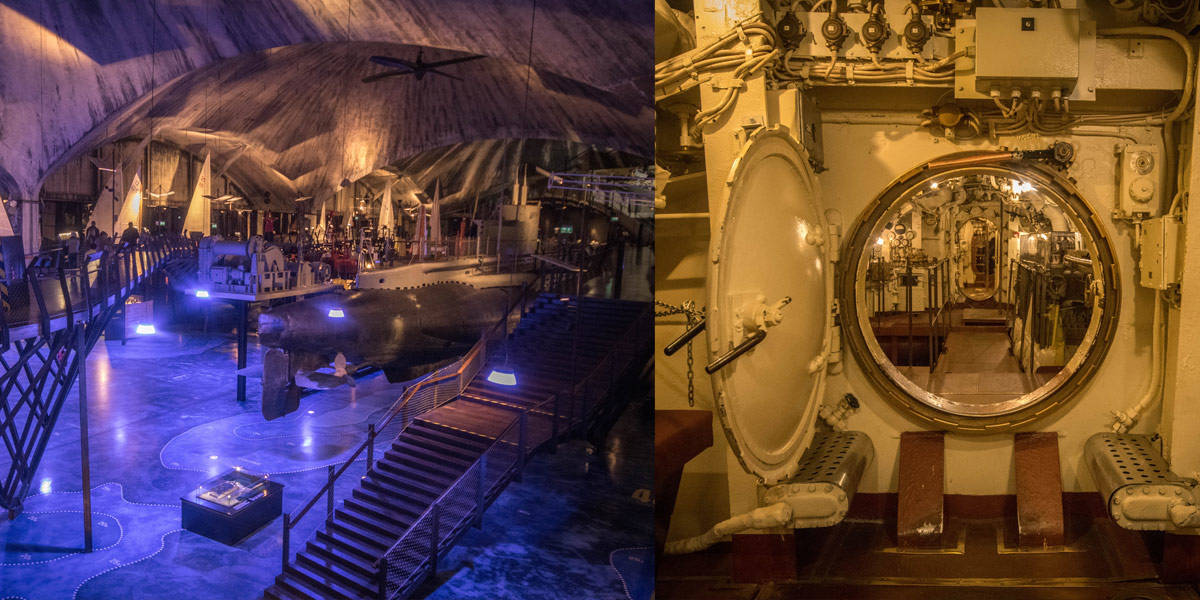 The Lennusadam is interesting and huge! You can easily spend a couple of hours here.

The KGB museum in the Viru hotel

When you stroll around the modern part of Tallinn, you may see some buildings named ‘Viru’.
An expensive hotel and a large shopping center. Not really interesting, you may think, but one piece of the hotel is particularly interesting!

The Viru hotel was the first skyscraper in Tallinn, built during the Soviet rule. Due to the ever increasing popularity of Tallinn (mainly among the Finns) and a desperate shortage of hotels, the Soviet government decided to plant down a fancy hotel. It might seem strange, because the Soviet regime was not exactly known for his kindness to tourists, but their need for strong foreign currency was still quite important.

This hotel attracted a lot of ‘greedy Westerners’ and they of course were served by people living under the communist regime in Tallinn. To ensure that they didn’t have too many contact with foreigners, it was not necessarily a good thing that you were fluently speaking a lot of languages. Only the front desk staff should’ve been able to speak a word of English and some Finnish, but the rest of the staff… Not really.

To look out for possible spies and traitors, there were obviously also people who needed to keep an eye out.

Well… The hotel didn’t have twenty-two storeys as was advertised everywhere, but twenty-three. Mysterious, isn’t it?
On the top floor -with stunning views, by the way- the KGB officers resided.

Their task was to find the corrupt staff members and discover spying Westerners. They didn’t do this alone, of course. On each floor a few old, cute ladies were sitting and pretending that they were reading little books or solving crossword puzzles. But in fact it was their job to keep an eye on certain individuals and write down everything he or she did.

Moreover, they got help from some electronic gadgets. Eavesdropping equipment in the walls, ceilings, plates and ashtrays. It seems to come straight out of a James Bond movie, but back then it was just the harsh reality.

The hundreds of rooms at the hotel were not all full, because the rooms surrounding a suspicious figure were also seized by KGB agents. With a little camera they watched their neighbors whole days on end. Those KGB agents seemed like perverts to me!
In my eyes this all is a little paranoid because in the history of the hotel, there were never any spies discovered. Corrupt employees on the other hand… But then again, how would you react with this kind of regime? If you see blow all this western luxury passing by, you of course will try to also get a little bit of that!

The KGB museum costs €10 and in holiday periods it’s highly recommended to book a spot in advance. Moreover, there are only one or two English daily guided tours and you don’t want to miss them! 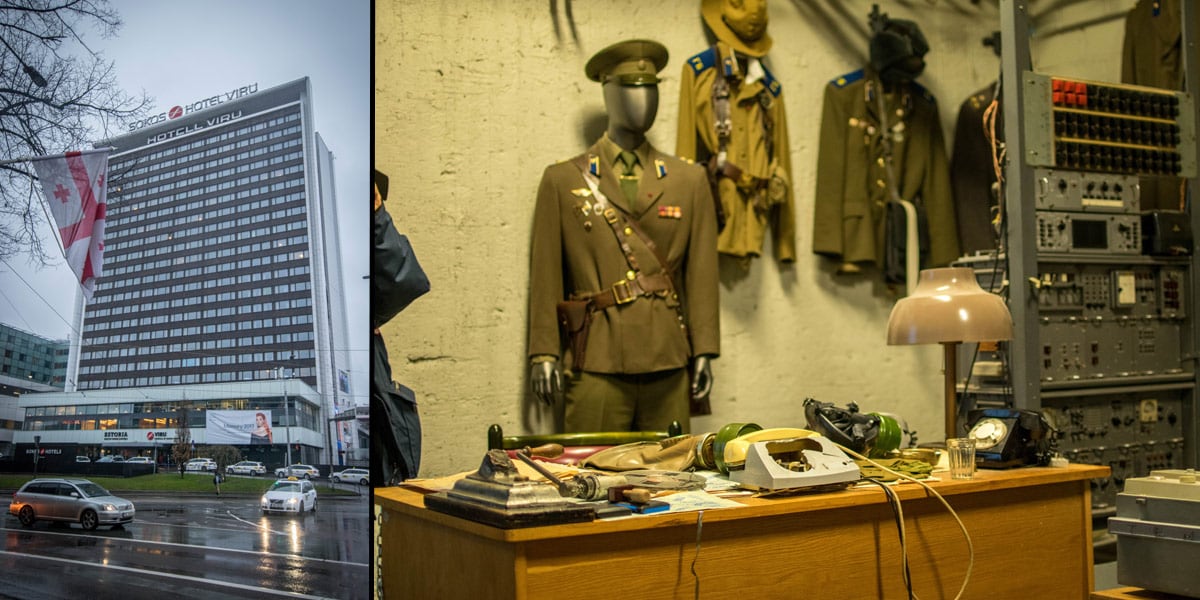 On the 23d floor of the Viru hotel you will find the former headquarters of some spying KGB agents.

Helsinki to Tallinn as a day trip: How to take the ferry and what to do?

11 Things to see in Tallinn, Estonia