"To be or not to be", everyone knows this famous phrase. It comes from the hand of one of the world's greatest writers: William Shakespeare.
This English writer, poet, actor and womanizer grew up in sixteenth century England in one of the most charming towns in the country: Stratford Upon Avon. To this day you can still visit Shakespeare's birthplace and other houses that meant a lot for the man. Are you wondering where Shakespeare got his inspiration? I tell you everything you need to know about a visit to Stratford Upon Avon: Shakespeare's hometown. 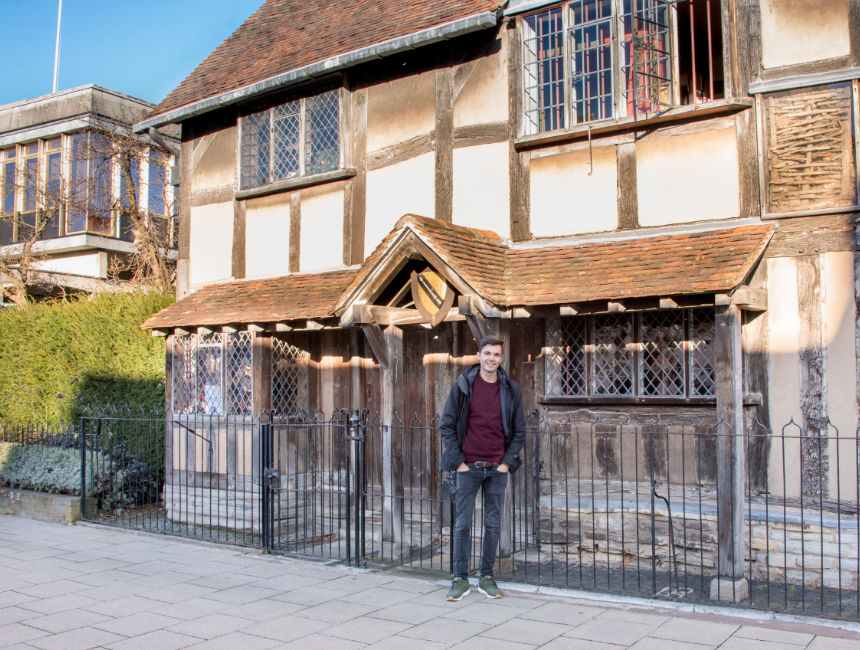 Stratford-Upon-Avon is a super-cozy town in central England, not too far from Birmingham. There are of course more picturesque places in this country, but this village is so special because the famous William Shakespeare was born here and eventually also died here.

Shakespeare’s Stratford-Upon-Avon is characterized by beautiful wooden half-timbered houses, the façades of which have been largely preserved. If you walk through the city it seems like you have stepped back into the sixteenth century. Most houses, restaurants and cafes have been modernized inside, but if you also visit the houses of Shakespeare and his family, you also get a glimpse of what the interiors used to look like during the Middle Ages.

Did you know that Stratford-Upon-Avon is the second most visited place in England? Shakespeare was and still is very popular it seems! 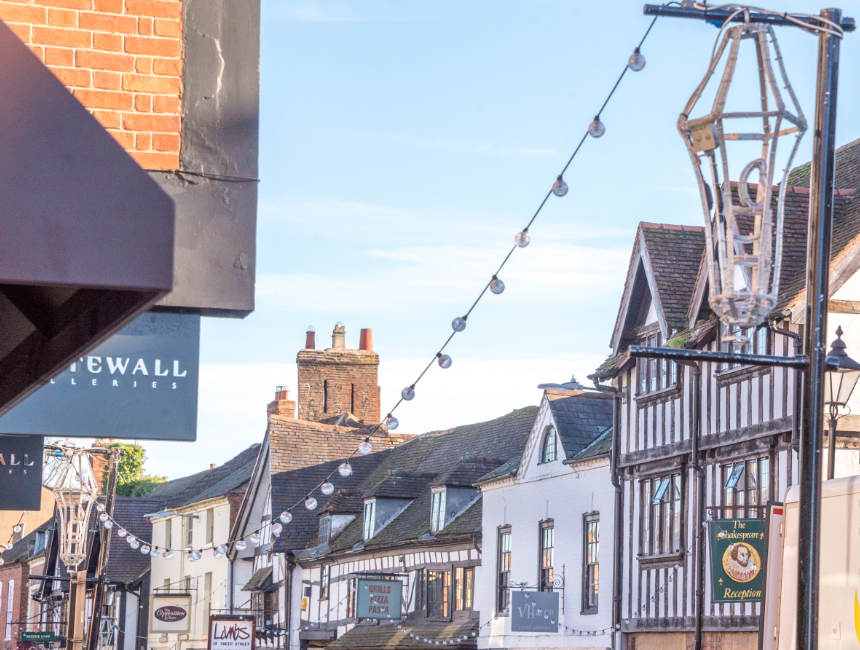 Say so yourself… Stratford-Upon-Avon looks incredible, doesn’t it?!

In 1564 little William was born, and 52 years later the man would die again because of a simple cold of which he never recovered. He was barely 52 years, and yet such a legend. Quite an impressive legacy, isn’t it?!

Throughout Stratford-Upon-Avon you’ll find many houses and places that have something to do with Shakespeare. You could thus describe the city as a mecca for Shakespeare lovers. In addition to being Shakespeare’s birthplace, you can also find the home of his daughter, his granddaughter, the house where he died, the residence of Shakespeare’s mother and his wife, the church where William is buried, and a lot of theater companies that only focus on the works of this man. You can read more about all these sights below.

Whether you know something about Shakespeare or not at all, all these places are surprisingly fun to walk through. The museums are anything but boring and you learn a lot about English customs and what a typical house looked like in the Middle Ages. You also get to know Shakespeare a litle better. And believe me… He was definitely not an angel! 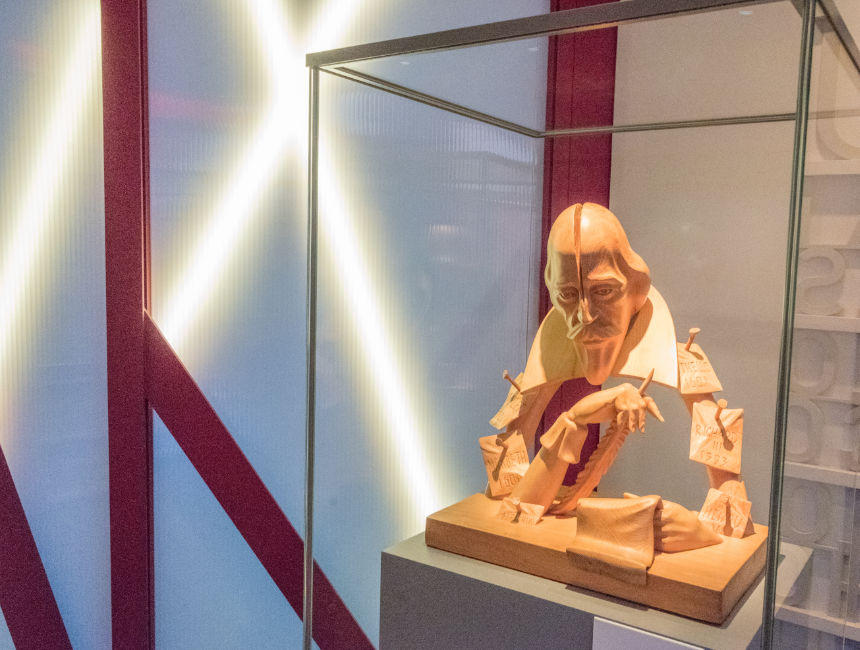 All Shakespearian places to visit in Stratford-Upon-Avon

Museum
The first part of Shakespeare’s birthplace has been transformed into an interesting exhibit. You can see here how great the influence was and what Shakespeare exerts on contemporary art. There is a nice video fragment you can see where Homer Simpson brings the most famous scene from Hamlet.
For the rest, you’ll find a lot of famous and lesser-known quotes from Shakespeare’s work, the man’s possessions, and important information if you want to get to know Shakespeare better.
Be sure to pay attention to Shakespeare’s will: “I give unto my wife my second-best bed.” – He must’ve loved his bed a lot!!!

At the end of this exhibition, true lovers of the world’s best-known poet can really treat their eyes. Here you can find the first folio. The book in which all original theater pieces by William are bundled.

The garden
Once you walk out of the exhibition, you end up in a cute courtyard. From here you can also see some beautiful half-timbered houses surrounded by a beautifully landscaped garden. Next to the birth house of Shakespeare (on your right side) you see a small square with a few benches. In the middle of it is a small stage where some actors perform beautiful scenes from his work every day. If you are familiar with Shakespeare’s work, don’t hesitate to request a specific scene. And don’t make it too easy! The actors know all the works of William Shakespeare by heart.
On the other side of the museum you can also find toilets and the souvenir shop that also serves as the exit.

Shakespeare’s birthplace
The house on the street side is for many one of the most interesting places to visit in Stratford-Upon-Avon. This is the home where Shakespeare was born and raised. In total there are six rooms. All of them are actually quite sober, until you reach the bedroom of Shakespeare’s parents.
Here you’ll notice a beautiful and colorful four-poster bed. It looks comfortable, but actually it is not. At that time they didn’t sleep on mattresses, but on straw bales… Quite itchy, I immagine!

If you walk a little further under the low ceilings and narrow rooms, you pass by the attic and the leather workshop and the store of William’s father. In the works of Shakespeare it’s sometimes very clear that little William also knew a lot about his father’s work. For example, he often describes the different types of wool or leather. 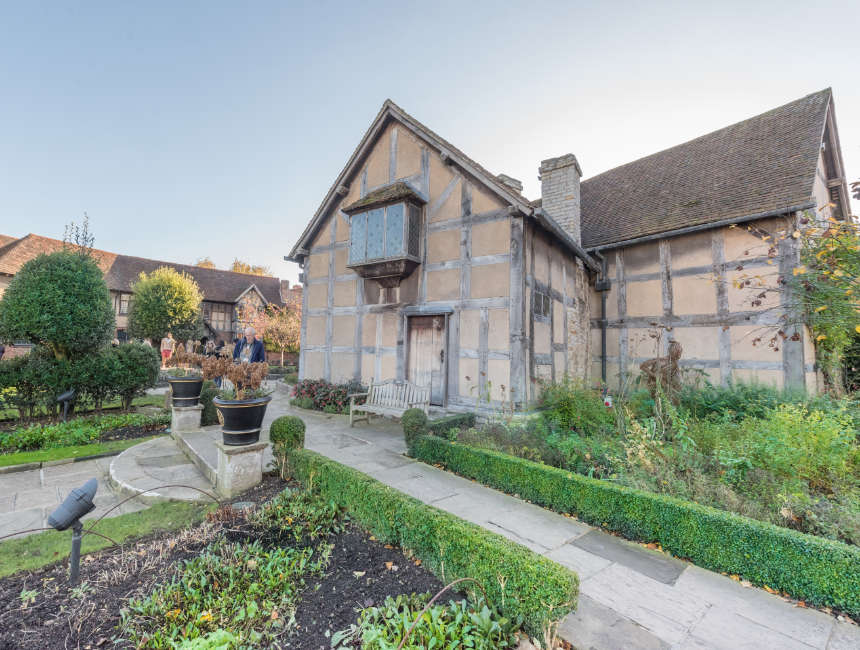 Shakespeare’s birthplace. The outside is perfectly the same as hundreds of years ago, but the interior is also largely untouched.

There’s a lot more to discover in Shakespeare’s hometown! Hall’s Croft is the house where the daughter of Shakespeare, Susanna, moved to in 1607. You may notice that this house looks a lot more stately. Susanna was married to doctor John Hall, and of course he could afford some more luxury. Here you will not find a lot of information about Shakespeare, but about the medicine and apothecary business during the sixteenth and seventeenth centuries. You’ll find an exhibition about medical instruments, a book about herbs and notes by Dr. Hall. Do you think that this is not your cup of tea? Then go and drink an actual cup of tea in the tearoom at the back.

Stratford-Upon-Avon and Shakespeare seem to have an everlasting bond, because this house too was owned by one of Shakespeare’s descendants. His granddaughter and her husband; Elizabeth Hall and Thomas Nash. The ground floor is now filled with fun objects from the time of Shakespeare, and the upstairs floor is packed with a collection of antique items.

New Place is the last residence of this famous writer. It was here that he died in 1616 from a simple cold that he couldn’t overcome. Unfortunately, there is not much left of New Place. After Shakespeare’s death the new owner decided to demolish the whole house, because he no longer wanted tourists to bother him asking to visit the house.
You can see the foundations of the original house from Chapel Street or from the garden at Nash’s House. 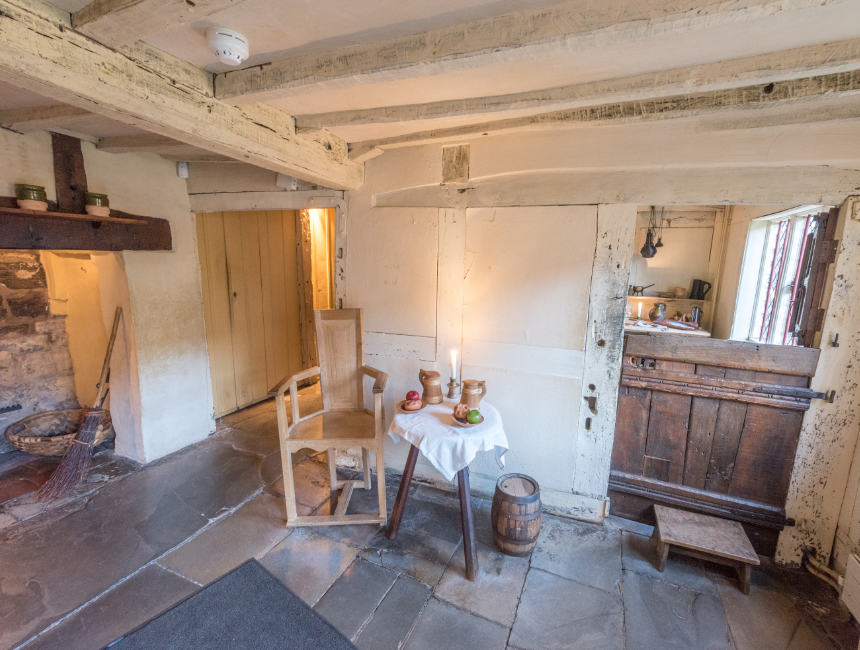 All of the houses of Shakespeare’s hometown are quite sober. But he clearly didn’t do that bad if you think of his celebrity status!

A short distance from all other places of interest is the house of Shakespeare’s wife, when she was still living with her parents. This house was inhabited until the nineteenth century by descendants of the Hathaway’s, and so there is still a lot of original furniture standing here. Here, too, you can find a cozy tearoom outside.

Even further away from Shakespeare’s Stratford-Upon-Avon is the Mary Arden’s House, the home where Shakespeare’s mother grew up and was born. This house is much older than the other residencies, and here too there is a lot of original furniture that has been preserved. In the adjacent buildings you’ll also find the Shakespeare Countryside Museum. That actually has little to do with Shakespeare, because you mainly see how a farm was run in the sixteenth century. For the children, the farm animals, a visit to the smithy and the flashy falconry demonstration are also very nice.

Royal Shakespeare Theatre and other theaters

The Royal Shakespeare Theatre of Stratford-Upon-Avon has a wonderful collection of costumes that were once worn by famous actors when they played a piece of Shakespeare. Of course you can also see some of the theater pieces of Shakespeare in this world-famous theater.
If you’re growing tired of Shakespeare’s plays, you can also go to The Swan. In this beautiful theater plays of Shakespeare’s contemporaries are performed.
Not everyone is equally fond of classical performances. For a modern theater experience, head to The Other Place. 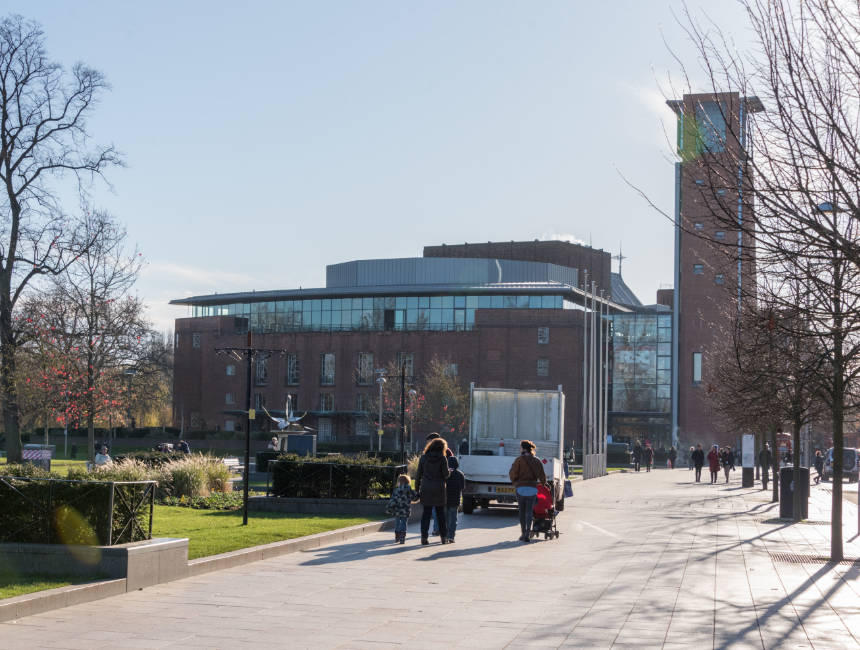 The Royal Shakespeare Theatre in Stratford-Upon-Avon is quite modern in comparison with the plays being performed here!

If you want to visit the final resting place of Shakespeare (and his family), you must go to the Holy Trinity Church. In this church you’ll find the sober graves of all family members. Shakespeare’s tomb has the following text engraved in it:

Good frend for Iesus sake forbeare,
To digg the dust encloased heare.
Blest be the man that spares thes stones,
And curst is that moves my bones.

In 1888 the French Peigniet and Marnez designed this beautiful bronze statue in honor of Shakespeare. His image is surrounded by famous figures from his most famous works: Lady MacBeth, Falstaff, Prince Hal and of course Hamlet. From the place where the statue stands you also get a nice view of the Avon and the modern looking Royal Shakespeare Theatre. Stratford-Upon-Avon and Shakespeare clearly love(d) each other a lot! 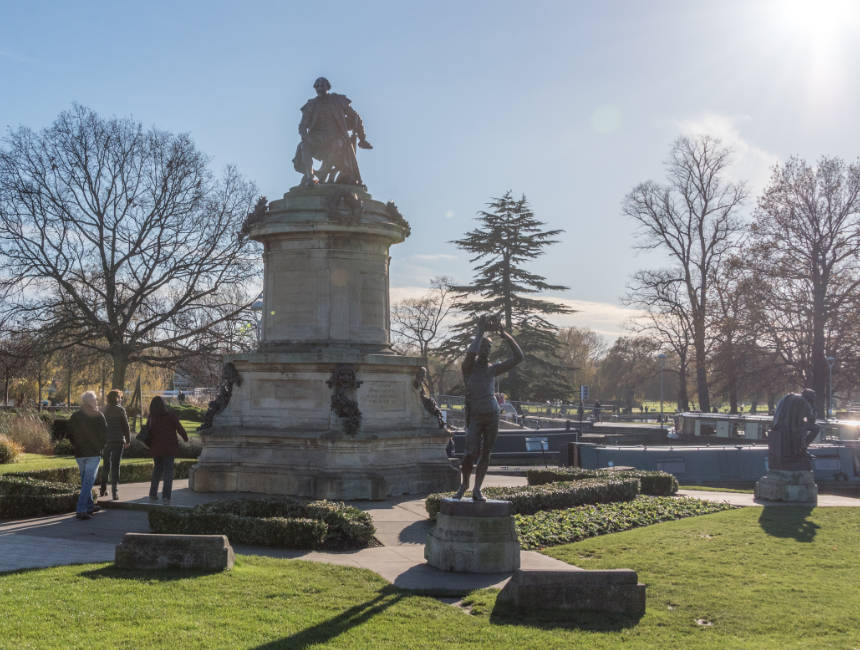 The Gower Memorial is one of the many Shakespearian places to visit in Stratford-Upon-Avon. Which of the characters do you find most impressive?

Fun facts about Stratford-Upon-Avon and Shakespeare 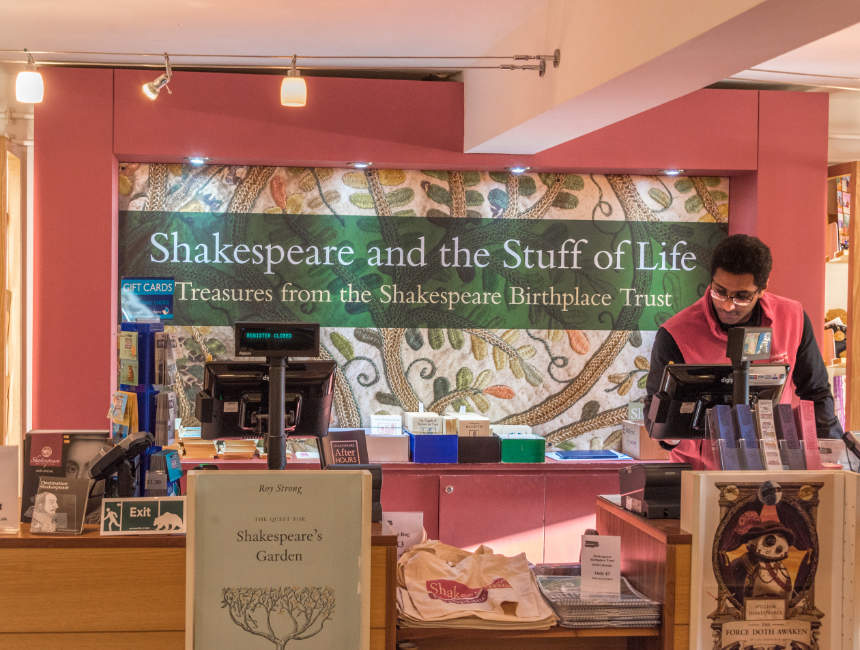 Are you fond of Shakespere? Then don’t skip the souvenir store!

How do you get to Shakespeare’s Stratford-Upon-Avon?

By car is the easiest and best way to explore Stratford-Upon-Avon, as certain attractions are quite far from each other. If you want to see all the houses of Shakespeare and his family is rather difficult without having your own vehicle.

Together with Sunny Cars I explored the area around Birmingham for a day. From the airport it’s a half hour drive along beautiful roads, beautiful sights and typical English landscapes.
Don’t worry about driving left i you’re not used to it. It actually isn’t that difficult, and you soon get the hang of it. To take away a bit of stress, you can always arrange an all-in insurance policy. With SunnyCars car hire, you automatically have a full option insurance. So you’ll have nothing to worry about in case of an accident.

If you don’t want to see everything in Stratford-Upon-Avon (or arrange it as a day trip from London), you can also take the train. From Birmingham or London will be the easiest. From the station of Stratford-Upon-Avon you walk to Shakespeare’s hometown in about ten minutes. Try to arrange train tickets in advance, because trains in England are incredibly expensive.

Of course you can also book day tours and excursions to Stratford-Upon-Avon.
Most tours are offered from London to Stratford-Upon Avon and are also combined with other attractions in the area such as Bath, Oxford, Stonehenge, Warwick, …
Check out the possibilities here. 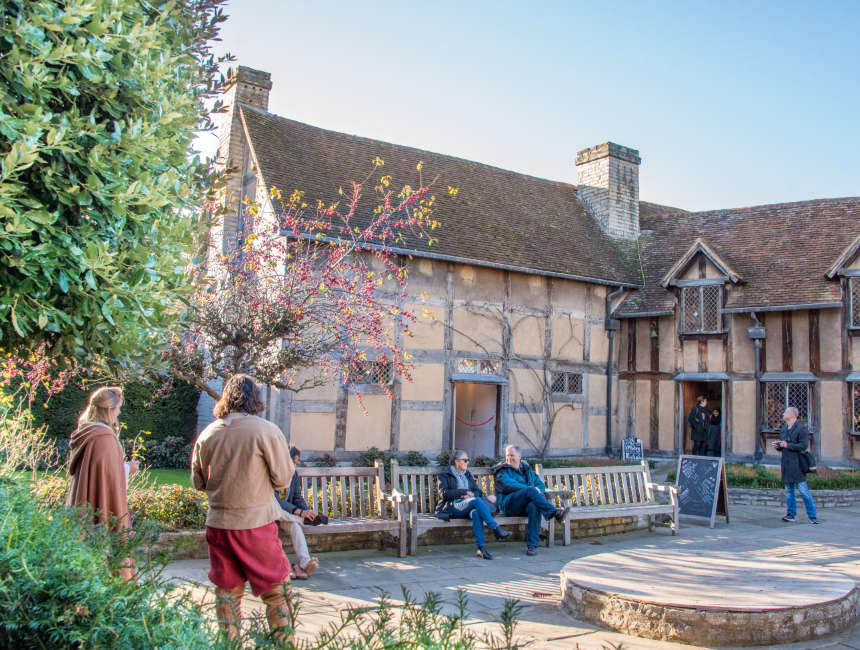 Stratford-Upon-Avon is Shakespeare’s hometown. And it honestly is one of the quaintest villages that I’ve ever seen!