The famous Atomium has been showing off in Brussels since 1958, but I had never been inside. It was about time that I met this piece of Belgian architecture from up close. 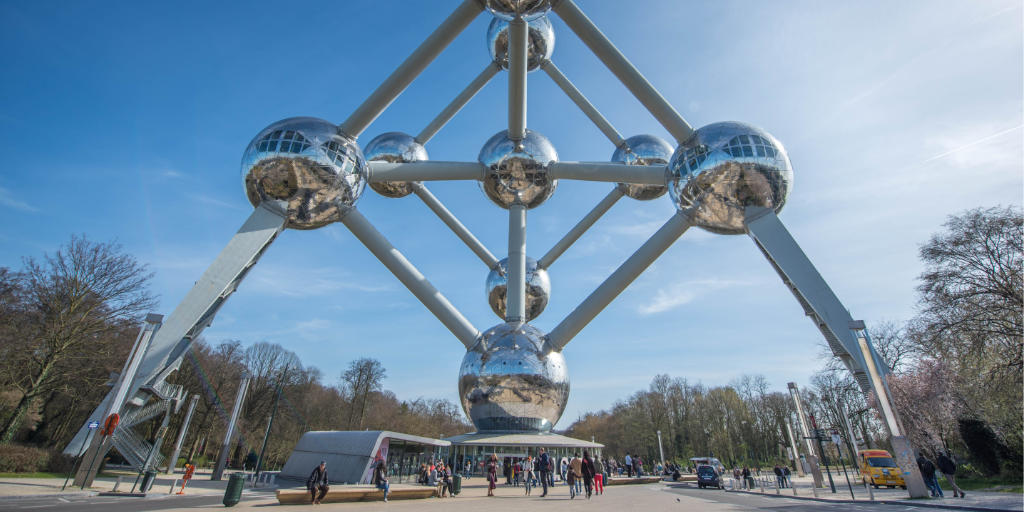 The Atomium symbolizes a crystal structure of Iron but then 165 billion times enlarged!

The first World Expo after the world war was held in Belgium. During this ’58 World Exhibition, the Heysel Park was transformed into an international melting pot of architecture and tourism. Originally it was planned that the Atomium would be broken down after six months, but because it was such a popular monument the Belgian government decided to leave it standing for a little while longer. Meanwhile, the weird monument has been there for 59 years extra already!

The Atomium is located quite far from the center of Brussels, which makes it less accessible for tourists. Still, you can get here quite easily from the center by taking public transport or the red hop-on hop-off buses. If you prefer to come by car, this is of course also an option.
Around the Heysel (= the area where the Atomium is found) you can park your car. I also went with the car and for about three hours of parking I paid six euros.

The imposing spheres can be seen from afar. The structure is 102m high (= 335 feet) and several hundred feet wide. It definitely shouldn’t take long to see the iron crystal taking over the skyline!
Since 2004, the Atomium and the surrounding park have been strongly upgraded. To the dissatisfaction of many proud Belgians the monument got a little dilapidated and thus the government decided to do something about that.
The Atomium was restored to its former glory with stainless steel and has been reopened to the public since 2006.

A single ticket costs €15 (pensioners, children and groups get a discount) and if you’d like to also visit Mini-Europe, then you can buy a cheaper combo ticket.
Try to buy your tickets online! The queues for the Atomium can be quite long, and with an e-ticket you may enter immediately! 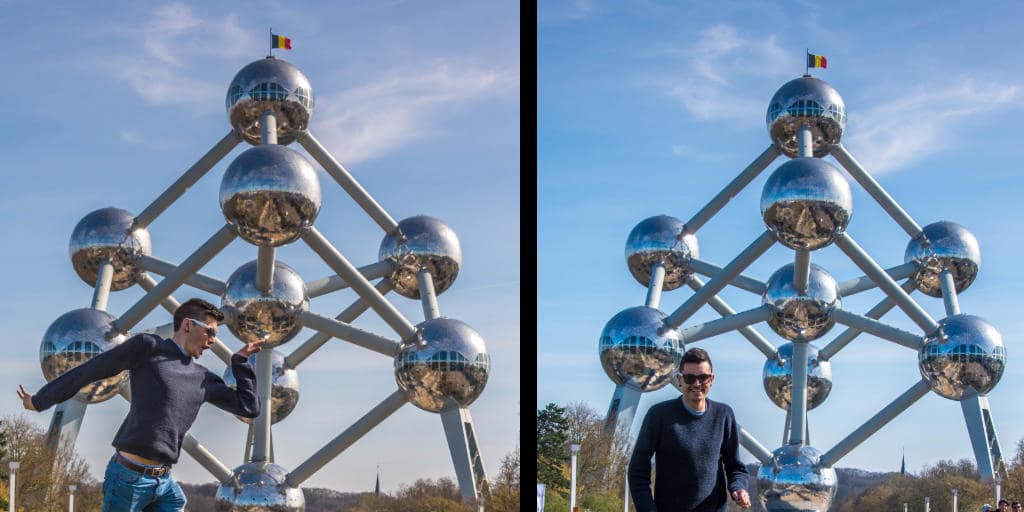 Striking a pose in front of the Atomium! A must for anyone who’s visiting!

Once you got your tickets (you can buy them online too for the same price), you can finally explore this extraordinary building.
After you put your bag in a locker, you can proceed to the lower bulb.
After a short safety procedure you’ll be grabbed practically immediately by a cartoon character who at all costs wants to make a picture with you. By the time you realize that you can buy these photos at a later time, you have already been pushed back to the side while another person has been dragged in for the next photo round.

Well… We’re not here for the Belgian comics anyway! We’ll go and explore the inside of the famous Atomium!

From the lower bulb I had two choices. Either I was going up the steps, either I joined the queue that would immediately catapult me to the highest sphere.
I chose to keep the panoramic view for later and to read some more about the monument itself firstly.

The bottom steel sphere is a permanent exhibition regarding the Atomium and the Expo of ’58. Did you know that the Atomium had almost not been built? A giant TV tower had almost taken its place! Mr. Waterkeyn didn’t want to let this happen and after fierce negotiations, the construction of his futuristic building could finally begin. 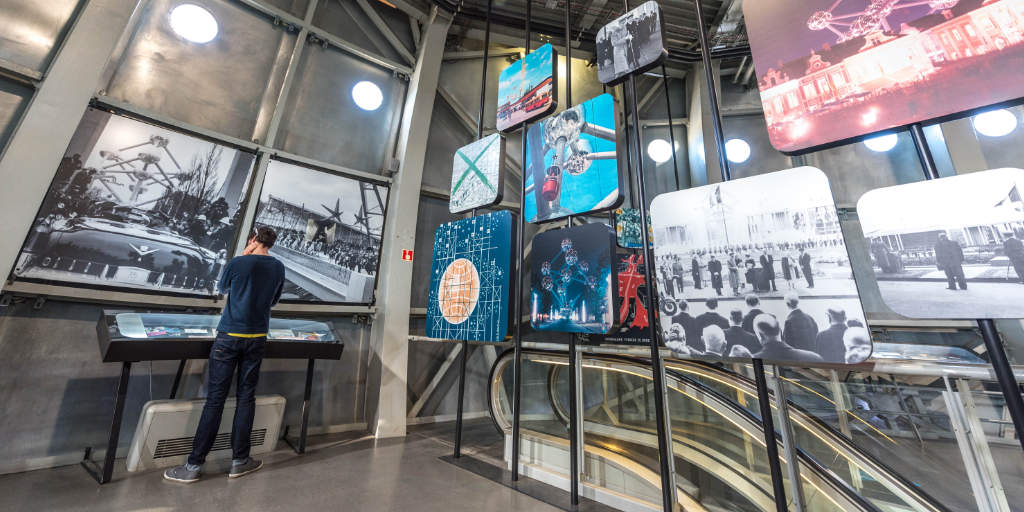 The second ball you can visit, focuses mainly on the World Expo of ’58. It’s very nice to see so many pictures of these beautiful monuments that were built during the Expo. Most of these buildings have been destroyed once the exposition came to an end. Alas, because many of these gems certainly would look great in the Heysel Park!
The ’58 Expo must have been a real event for the little Belgium. Finally some relief after that terrible world war!

I continued my visit with a long escalator that hoisted me higher and higher. In these steel bunkers a temporarily exhibition was held about Sabena; the former Belgian airline company.
At the time of Expo ’58 people kept inventing non-stop! And they also took several inventions into the airline industry! Quite weird to see how all this progress went so fast. Especially when you see how little actually has changed since then. Don’t get me wrong! A lot has changed, but if you see how much they did in so little time… Wow!

I took the escalator back down and was treated to a stunning futuristic light show. While the escalator rolled all of its guests down, we were surrounded by red, blue and white dancing lights. Kind of like the northern lights, but then showcased in the Atomium. Well… Why not?! 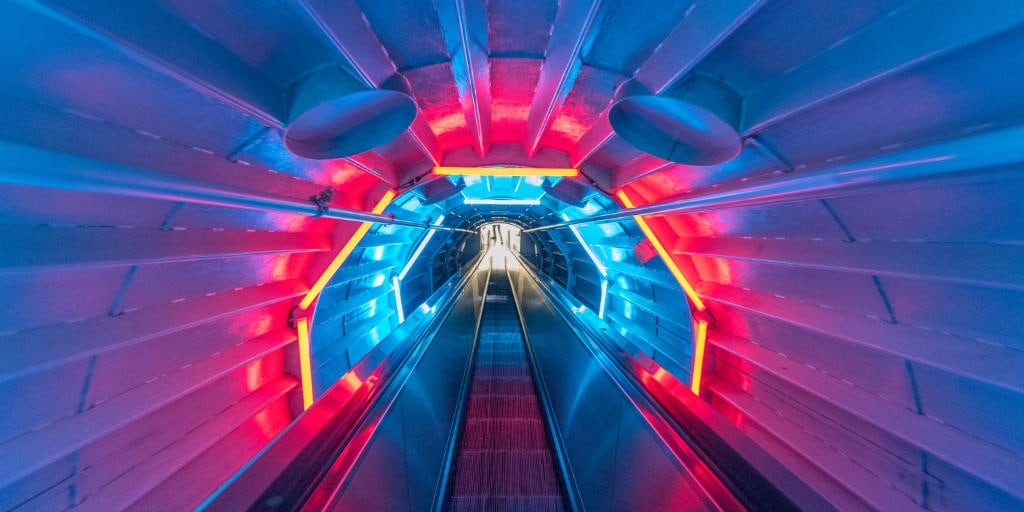 With 45m, this is the longest rolling escalator of Europe, but I wouldn’t have minded if the great light spectacle would take a little longer!

Panoramic views from the Atomium

The main reason why I got tickets for the Atomium is of course for the views. Once I got back at the bottom of this strange structure, I had to queue up for about fifteen minutes to get a peek at the panorama from the upper ball. Only a dozen people could be brought up at the same time.
The non-stop working hoist was the fastest elevator in Europe in 1958, but with 5m/s, the one in the Atomium was dethroned quite quickly by much faster copies.

While you are being zapped up, you can watch through the glass roof to have an inside peek at the shaft you are racing through. In mere seconds you get up to 102m and from there you can finally enjoy a magnificent view of the Heysel and Brussels.

Granted; the views are not the best, but you’ll get to see tens of miles in good weather. The tiny little people and buildings are quite special, especially if you know you’re getting an overview of more than one million people walking and driving under you. Because of this panoramic view you can also see how big Brussels actually is, and especially that the city won’t stop expanding soon. 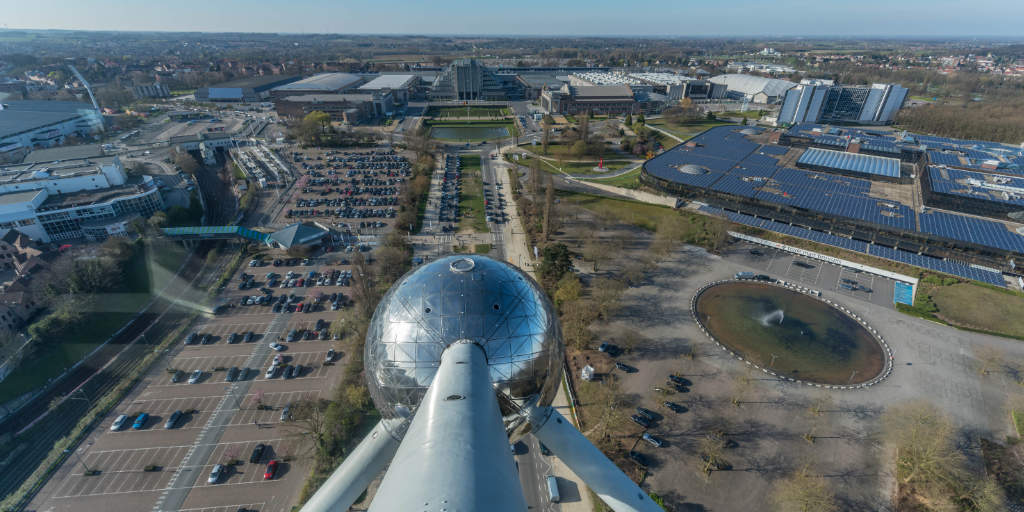 The view on the ‘Heysel’ (Heizel) from the Atomium. 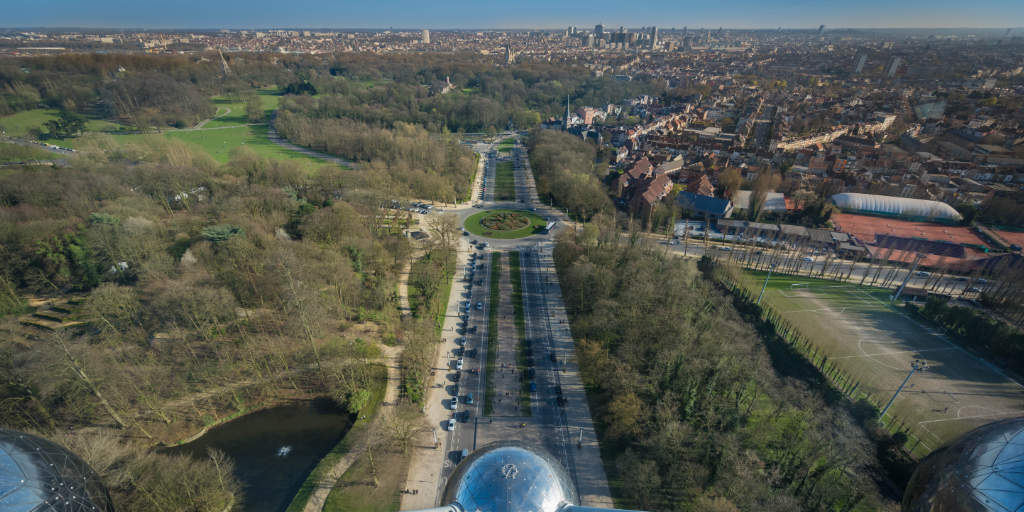 While Brussels can be seen in the distance, you see small people walking along and miniature cars driving by.

Due to the good weather, I decided to enjoy the soft sun rays in the Heysel Park and do some people watching while I was at it. The Atomium might seem like a quirky monument, but it’s definitely worth a visit!

Do you want to see one of the weirdest buildings in Europe? Then you should definitely visit the Atomium!
You can buy tickets for €15 per person online. Do you need some more ideas on what to do in Brussels? Check out these tours en tickets:

The most beautiful Christmas markets of Belgium