Yawn!
The tour of Israel had been very tiring. On average we had walked fifteen kilometers a day and for the rest we also spent a lot of time in a van. Still, I don't want to complain because everything we saw was very, very interesting!
Today was the day I had been looking forward to for a very long time already. Today we started with our two day tour of Jordan! One of the Arab countries neighboring Israel. Once we crossed the border, we were heading towards Jerash and Amman. And tomorrow we would go to the mysterious Petra. One of the new and ancient wonders of the world. 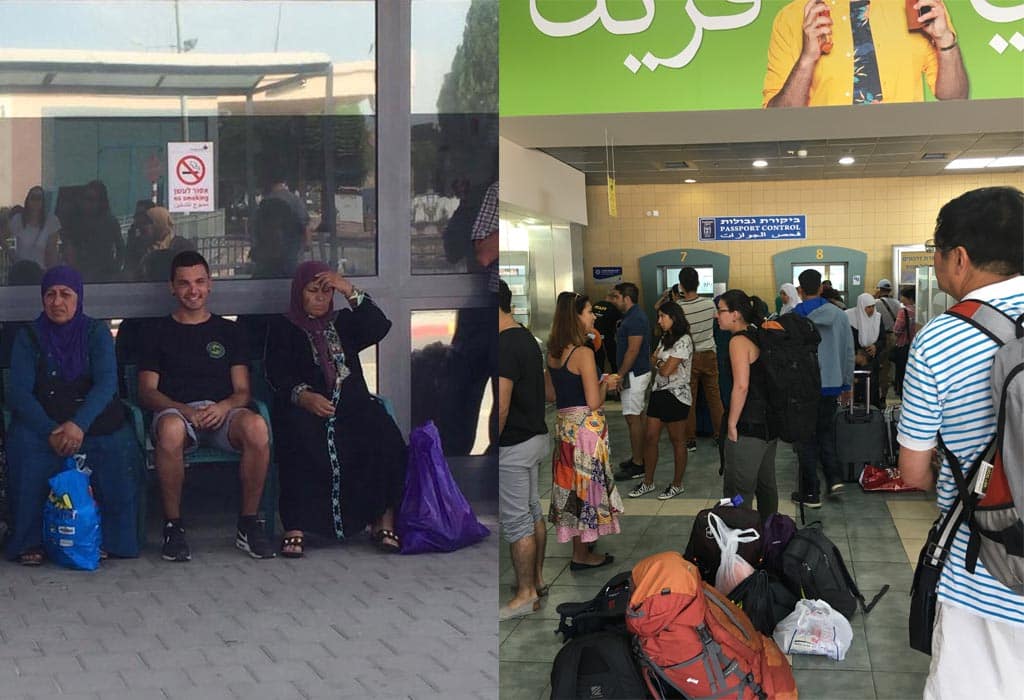 The border inspection to go from Israel to Jordan took more than four hours! Pfeeeewwww… O.o

Traveling from Israel to Jordan is a real pain…
You must know that Israel is really disliked by most other countries in the Middle East.
Previously, anyone who had his or her passport stamped with an Israeli stamp, could no longer enter most Arab / Islamic countries. Fortunately, Israel changed its policy, and now gives a separate piece of paper on which the stamp is printed.

Relations between Israel and Jordan don’t always run smoothly, but for now they are at least on speaking terms… Of course! Because there are a lot of tourists coming from Israel to Jordan for a few days. And there is of course a lot of money to earn for both countries this way!

From Israel we took the Sheikh Hussein passage or the northern checkpoint.
At this border crossing, you don’t need to get a pre-arranged visa. From Israel, everyone will have to pay a considerable sum to get in Jordan.
(From the other passages you have no opportunity to apply for a visa! So if you take another passage, you should already have applied for a visa at the embassy back in your home country!)

Once you arrive, your passport will be checked and after that you have to walk through a metal detector. Then you step a little further before you can again enjoy the wonderful air conditioning. In this building you have to pay the Israeli ‘departure tax’.
This is 100 NIS (a little more than twenty euros). Then you get a ticket which you have to show a little further along with your passport before your passport gets its final stamp.
This passport control can sometimes be very difficult, as they kept the passports from some people for half an hour or longer.

Normally we would already embark on our journey towards Jerash and Amman at 10 in the morning, but it was already thirty minutes later
Outside we took the bus… But contrary to what everybody was thinking, we only spent a few hundred meters driving in it. We had to get back off. This time on Jordanian territory, where we had to wait even longer for our Jordanian visa.
Here you pay a a firm sum of 43 Jordanian Dinar. (Converted approximately €55 / $60.)
And of course like everywhere else… You will also be asked some questions before you are admitted to the country.

With two, nearly three-hour delay we finally could leave the Jordanian checkpoint! The guide was clearly eager to get out of here, as he rushed us into the van.

“Welcome to Jordan, my dear friends!” he began. 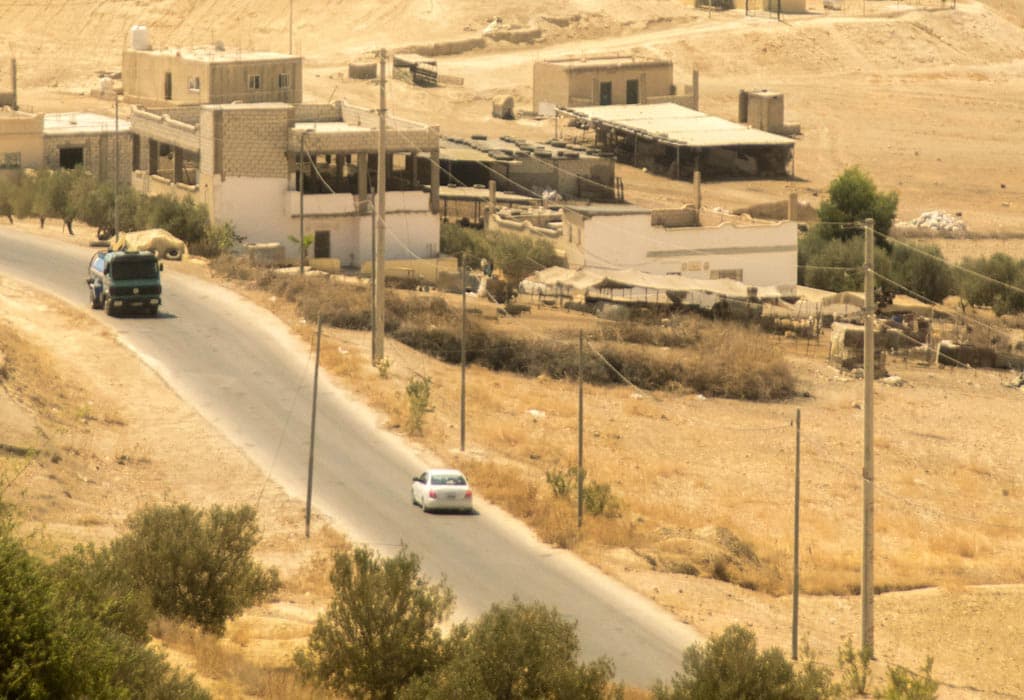 The view we got once we passed the Jordanian border.

Once we finally got into our van, we could finally leave for Jerash.
During our long drive, the excellent English speaking Jordanian guide explained a lot. He talked about all kinds of things, and we could ask as many questions as we wanted.

As we came closer to Jerash, he told us more about this giant archaeological site.
The city is the largest Roman city in the Middle East, and I think even one of the best preserved in the world. To 614 this metropolis remained in the hands of the Romans, and it was conquered by one civilization after another, but fortunately remained intact.

The income of the huge archaeological park was quite impressive in itself! A largest triumphal arch leading the hundreds of tourists -and many Jordanians- inside the sandy city.
Pillars and beautiful buildings filled the area from left to right, nicely spread out while they demonstrated the Romans masterfully created city.

Viaducts, aqueducts, amphitheatres and many temples. Jerash was (and still is) clearly a masterpiece! 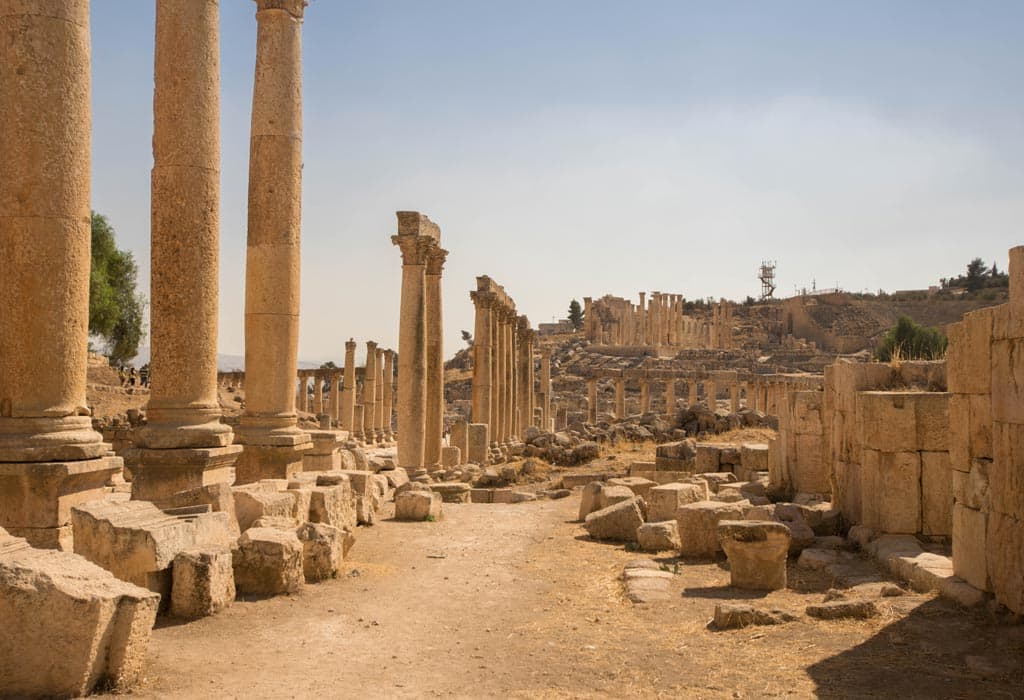 Spread over a couple of miles, you will see lots of pillars in Jerash. 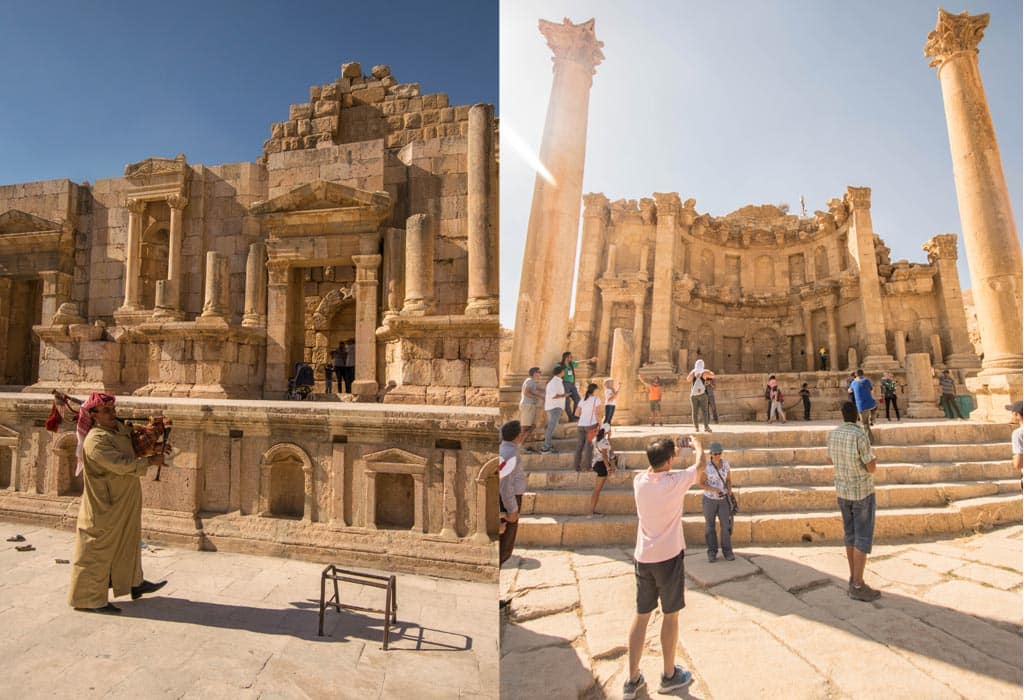 On the left you can see a remnant of the British invasion of Jerash. On the right you can see one of the many temples (this one was for Zeus).

The guide dragged us –a little too fast for me– through Jerash and had already warned us that we probably could not see the Amman Citadel due to the time we lost at the borders.
Normally, he gave a very comprehensive tour of Jerash, but now he had to shorten it to about one hour.

After our tour, he tried to get us back to the bus as quickly as possible with the prospect that we might actually still see the citadel. The man clearly had good intentions, but I was irritated by it. After all, you’re on holidays and you don’t want to get rushed around…

Some twenty or thirty minutes later we arrived in Amman. The busy capital of Jordan. With almost four million inhabitants, the city is buzzing with life.

The openness of Jordan is clearly visible. Women that are veiled from head to toe are common, as well as women with makeup and more visible clothing. Even the religions seem to live in harmony here.
95% are Muslims and 5% are Christians, but honestly… I couldn’t tell the difference most of the times.

We drove a little further, until we got a nice overview of the city. At this high point you can also see the Amman Citadel.
This citadel is invaluable to archaeologists, since a lot of excavations from different civilizations were found at this particular place. Byzantines, Greeks, Romans, Phoenicians, … You name it!

The property is quite large and you get a very nice view over Amman. A lot of locals also come to visit, to make selfies or to greet the tourists with friendly and happy smiles.

Sofia, Oscar and I walked around on the large premises and when we got back, we saw that our guide got even more nervous than earlier today.
Oops… We were already half an hour late! 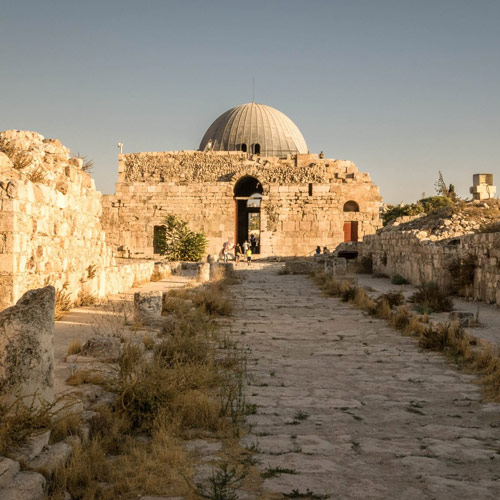 The Citadel of Amman. Quite inspiring to walk around in!

Reluctantly we got back on the bus, but no one seemed to blame us for being late. With the sunset visible through our windows, we still had some distance to go. It was now about seven o’clock and we still had to go a little over three hours before we would arrive in the bedouin camp near Petra.
The schedule that we had, said that we would normally have arrived around 8 PM. So in total we were about two hours late…

After being completely mixed together because of some rocky roads, I was caught a couple of times with some saliva dripping down my open mouth. Instead of sleeping I then tried to just listen to the deep conversations some people of the bus were heaving.
Tonight we slept in a beautiful bedouin camp in Jordan: the seven wonders bedouin camp.
The camp was equipped with every luxury, but we were asked to not use too much water. After all, we were still well in a desert…

The region where this camp was located in had been named ‘little Petra’. Since it was getting dark, you saw that little flickering candles were put on the mountain slopes and they were lighting up the entire camp with its dancing lights.

The Bedouin, with their typical black eye makeup and long hair, welcomed us with delicious dinner followed by a beautiful musical show.
The food in Jordan is indeed delicious! It is similar to the food in Israel, but in my opinion just a little tad better. The humus and couscous are delicious!  The Umm Ali dessert, however, is still most on my mind. HMMM!

Soon it became later and we would have an early start to our trip to Petra. The tents had wonderfully comfortable beds and it didn’t take long before I was dreaming about all the beautiful things that I was going to see tomorrow. 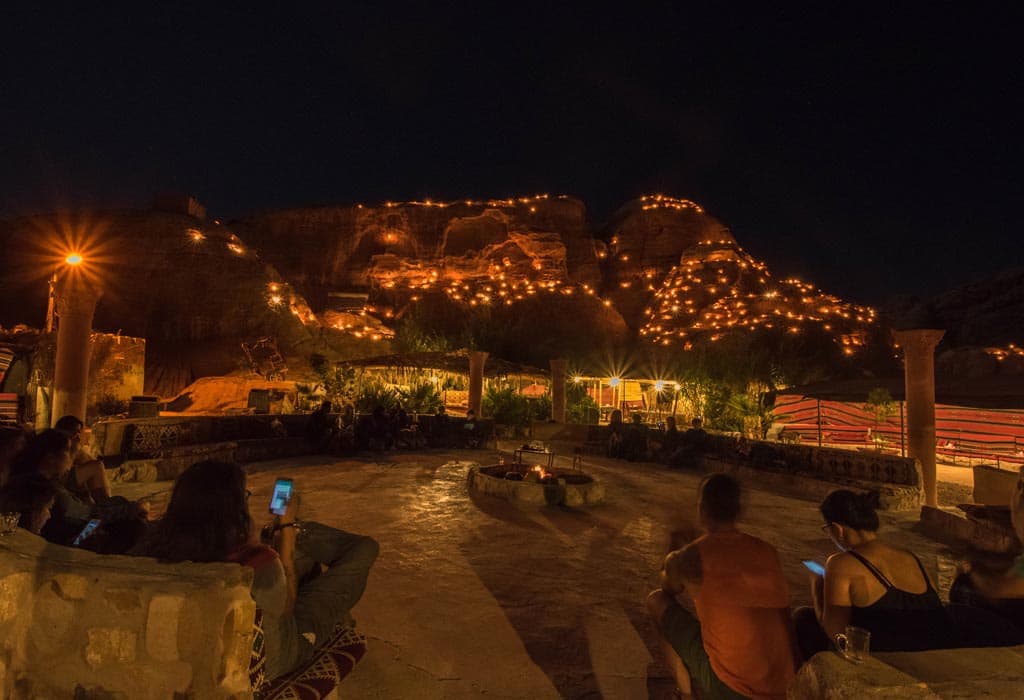