Alcatraz is probably the best-known prison in the world. It may be almost as famous as the other eye-catcher of San Francisco, the Golden Gate Bridge. Fortunately, you don't only have to view it from a distance, because there is a tour where you visit this prison island in all of its glory. This way you can see with your own eyes where world-famous criminals, like Al Capone, spend their days. Safely locked away behind bars. 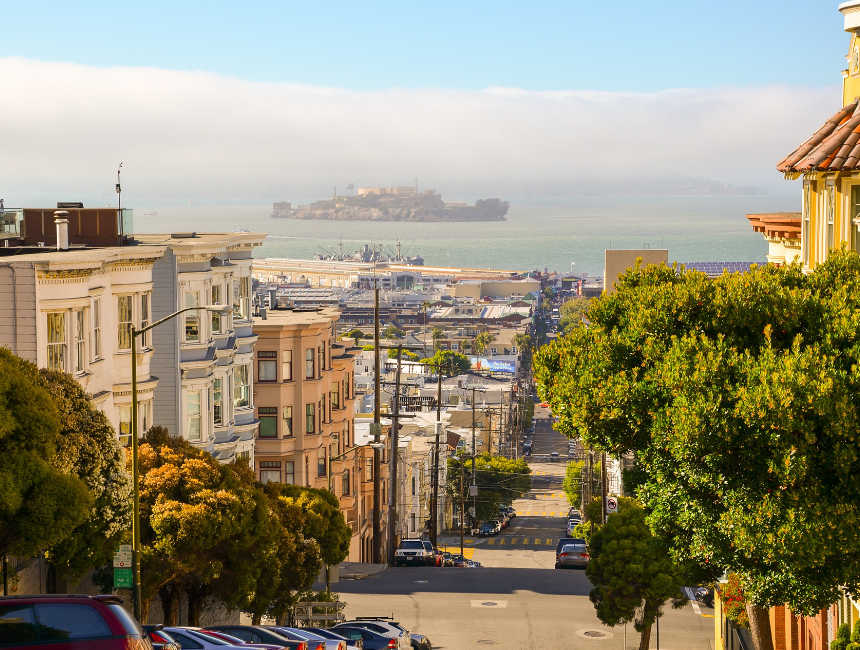 From high up the steep streets of San Francisco you can already see the prison island of Alcatraz!

A short history of Alcatraz

One mile from San Francisco’s coast lies the most famous prison island of the world: Alcatraz. What many don’t know is that it was originally a military fort (from 1850 to 1907) and then a military prison (from 1907 to 1933). It was only in 1934 that it was used as a prison because of its remote location and because the strong water currents made escaping (almost) impossible.
Nevertheless, Alcatraz was already closed in 1963. The main reason was that this prison island was too expensive to maintain. Compared to a ‘normal’ prison, it cost three times as much to hold a prisoner. The other reason for the early closure was the salt water that had eroded the buildings severely. In 29 years, Alcatraz had 1576 prisoners to take care off. 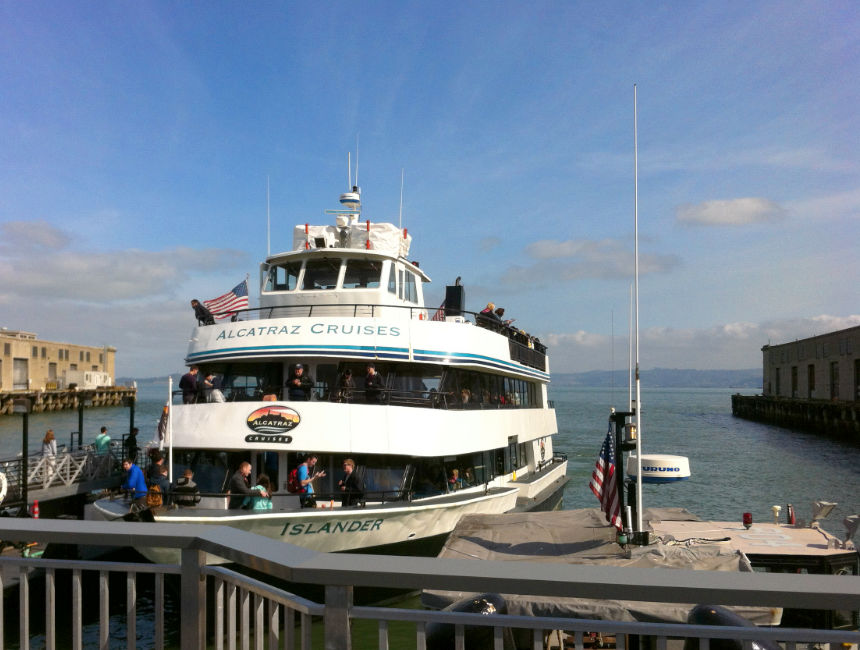 The only boats that head to Alcatraz are these: the Alcatraz cruises boat.

Do you want to visit Alcatraz? Then be careful that you purchase Alcatraz tickets with the right organization! Alcatraz Cruises is the only official agency that brings you to the island itself. Other organizations just pass by!
For advantageous combination tickets, you can however book with many other organizations. 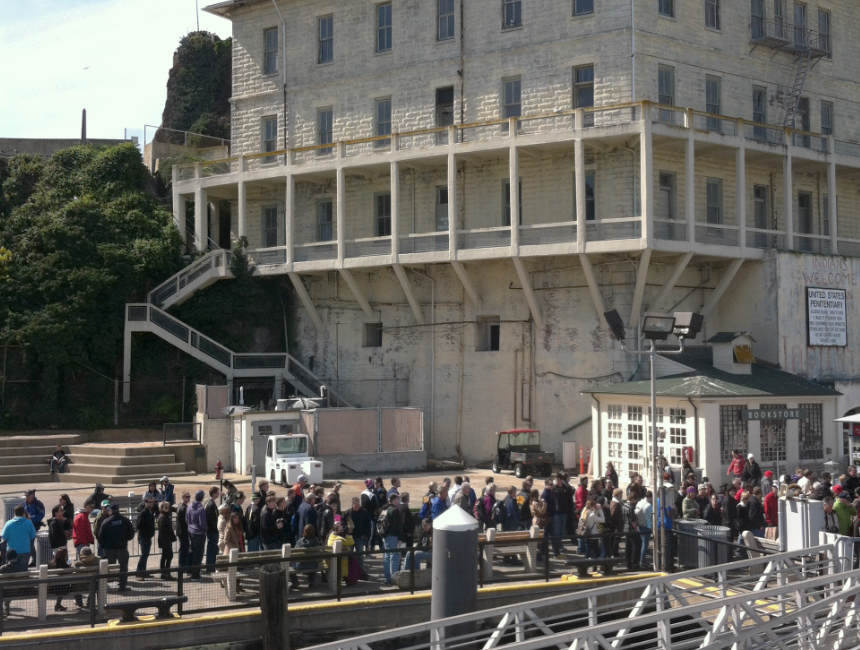 Even on the island itself there’s a waiting queue. I really do recommend buying tickets for Alcatraz in advance!

I recommend anyone to book tickets in advance if you want to visit Alcatraz. Tickets for Alcatraz are made available in advance for ninety days. More than enough time, you would think. But the entrance tickets are booked rather fast! So be quick! If you know you’re going to San Francisco, and you want to make sure you’ll visit Alcatraz, I recommend buying tickets right away.

You have different types of tickets for Alcatraz and to make it easy for you, I’ll explain them here. Each tour is also provided with the ‘Doing Time audio tour’ that takes 45 minutes. Although this audio guide is offered in many languages, I recommend that you choose the English version even if you have another mother tongue. This version is a lot more animated and has won quite a few awards!

This tour is not guided, so you can visit Alcatraz at your own pace. You will get an audio tour.
Price: $37.25 for adults and $23 for children between twelve and seventeen years. For seniors, an admission ticket costs $35.25. For a family ticket (two adults and two children) you pay $112.75.
Departure times: from 8:45 in the morning until 3:50 pm.
Duration: about 2.5 hours or longer.

If you want a more intimate and engaging experience, you must choose for the night tour. In addition to an audio tour, you’ll also get a guided tour both on board and on the island. In addition, you can enjoy a breathtaking sunset from the island. This is the best option if you want to visit Alcatraz, but be quick! Because these tickets sell out very quickly.
Price: $44.25 for adults, $43.25 for children between twelve and seventeen years, $26.5 for children between five and eleven years and $41.25 for seniors.
Departure times: 5:55 pm and 6:30 pm.
Duration: About 2.5 hours.

Behind the scenes (Thursday to Monday)

This tour offers the most complete Alcatraz experience because you also get a look behind the scenes. This tour is also physically quite heavy because you climb around the island, so be prepared for that. Make sure you don’t do this tour on an empty stomach.
Price: $89.25 for adults and $85.25 for children between twelve and seventeen years and $83.25 for seniors. Please note that due to the length of the tour, all participants must be at least twelve years old.
Departure times: 4:20 pm and 4:50 pm.
Duration: About 4.5 hours. 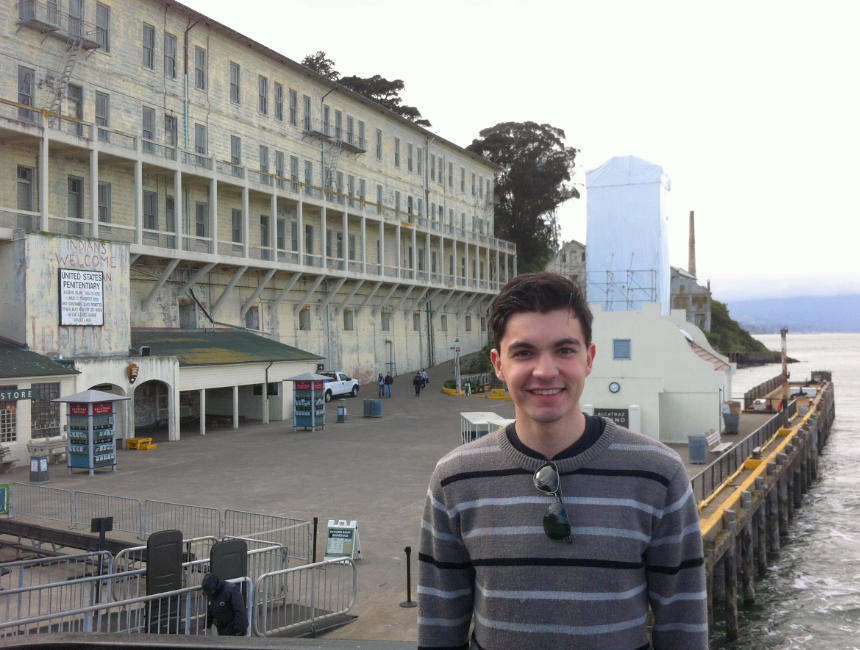 I was also an inmate in the Alcatraz prison! Well… Not really. Just for a day then!

During a period of 29 years, a lot of bad boys spent time on this prison island.

The most notorious is undoubtedly Al Capone. This mafia boss (nicknamed Scarface) lived from 1934 to 1939 in ‘The Rock’ as Alcatraz is also called. Although he didn’t die here, it is said that his ghost still haunts the place.

Robert “The Birdman of Alcatraz” Stroud is almost as famous. He was sentenced for life because of the brutal murder of a bartender who had refused to pay a prostitute (of whom he was the pimp). He got his nickname because he bred and sold birds in prison, where he became a respected ornithologist. From 1942 to 1959 he stayed in Alcatraz, where unfortunately he wasn’t allowed to keep any birds. 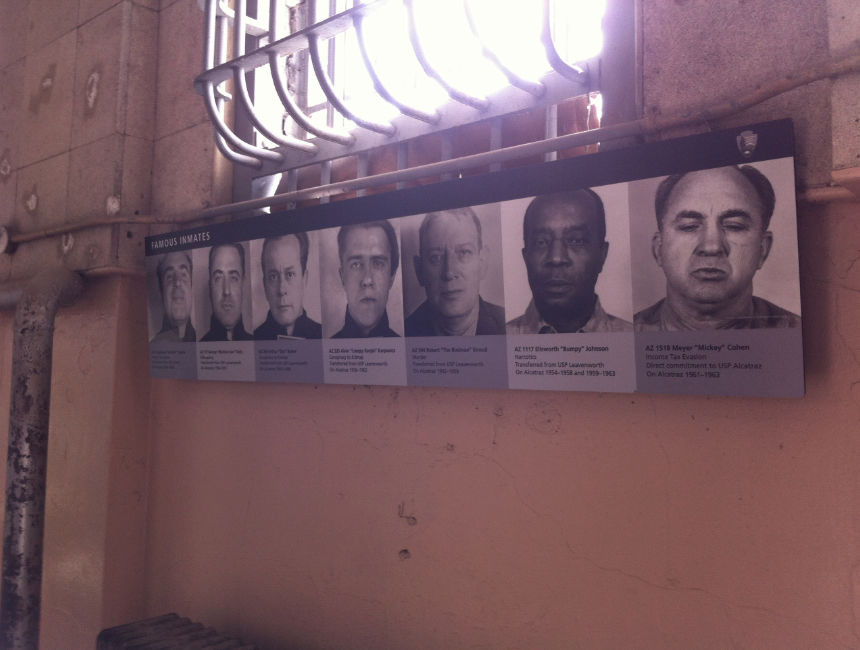 The mugshots of some of the most famous prisoners of Alcatraz.

According to the prison itself, in those 29 years, none of the prisoners could ever escape successfully. 36 prisoners tried to escape for a total of fourteen times, 23 of whom were taken captive, six were shot during their attempt and two drowned. Five prisoners are believed to be drowned as well.

There is only one escape that might be successful. Late in the night of June 11, 1962, three prisoners (Clarence Anglin, John Anglin and Frank Morris) put ‘heads’ of paper-mâché under their bed. Then they slipped away through a corridor which wasn’t used anymore in the prison and left the island using a man made raft. To date, they still don’t know exactly what happened to them, although the FBI officially concluded that they were drowned in 1979. 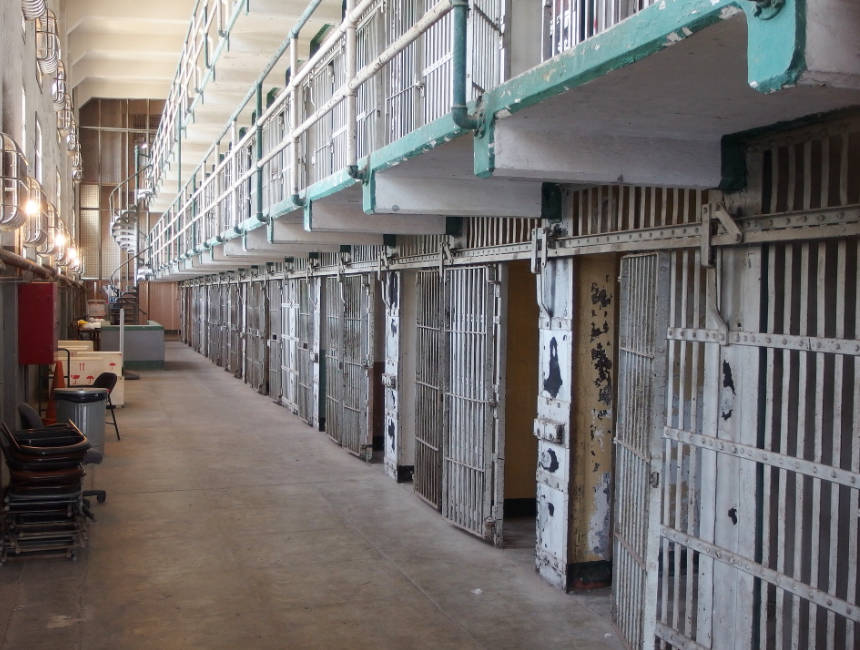 Some facts about Alcatraz

Visiting Alcatraz is an experience that will stay with you forever because this prison island really speaks to the imagination. If you can, you should definitely opt for the fun night tour and enjoy the sunset and the skyline of San Francisco. If all tickets are already sold out during your planned visit, you can either look at Alcatraz from a distance from Fisherman’s Wharf, or choose a boat tour that sails along the island to see it closer.

» All tours and excursions to Alcatraz