Rome is a city characterized by history and culture that is almost unprecedented. You immediately think of monuments such as the Colosseum, the Castel Sant'Angelo or the Roman Forum. What you may not know is that La Città Eterna also has a particularly rich underground history. Welcome to the catacombs of Rome!

Tours to the catacombs of Rome 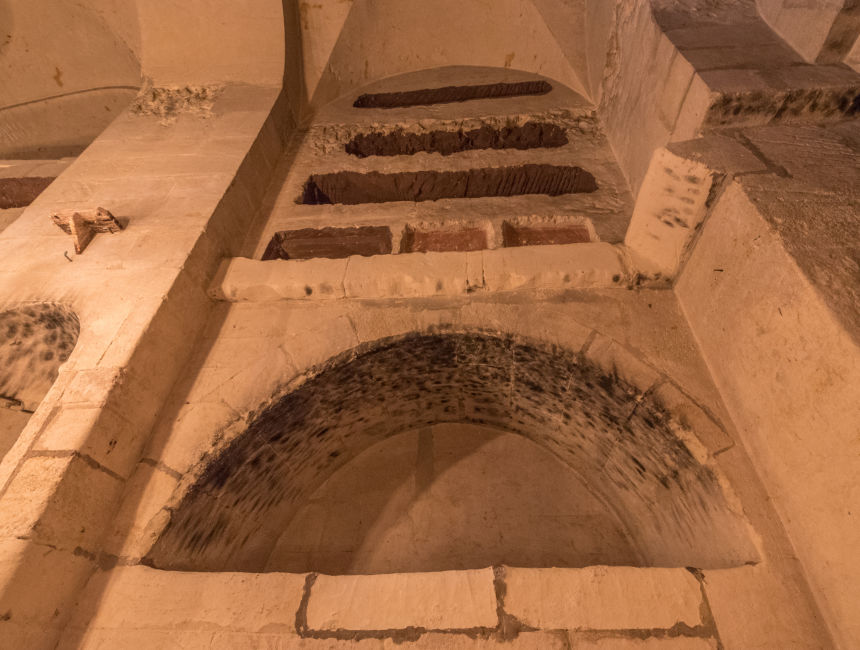 In the second century AD, Rome faced the problem of overpopulation and a shortage of land. More and more people were looking for shelter in the Eternal City, and as a result, more and more people also lost their lives here. One couldn’t just leave these poor people in the streets, but there were almost no other place to bury them. Inspired by the Etruscans, they decided to give the deceased a final resting place in underground chambers. Originally, the dead were cremated, but under Christian influence (belief in a resurgence of the body) one needed to preserve the mortal remains as a whole. Although mostly Christians were buried here, people from every religion were found here. In total there are at least 40 catacombs in Rome, but I’ll only list the most special ones for you. 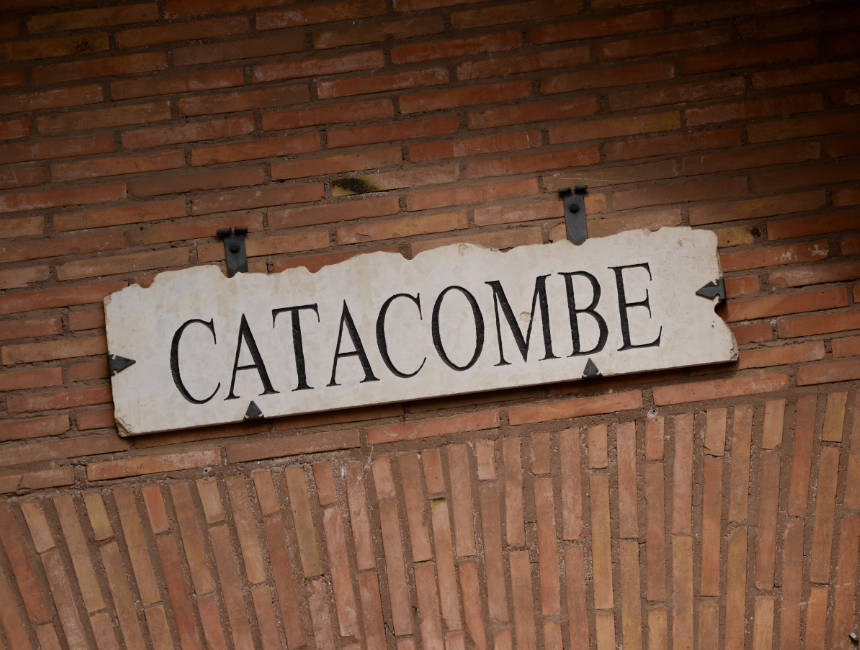 Do you dare to descend in the dark corridors that run under Rome?

The catacombs of Priscilla

Because so many martyrs are buried here, this resting place quickly got the nickname “Queen of the Catacombs of Rome”. Because the entrance had been blocked to prevent theft, these Roman catacombs were completely forgotten about until they were rediscovered in the sixteenth century. In addition to the usual sarcophagi and chapel, you’ll also find a number of beautiful paintings here. 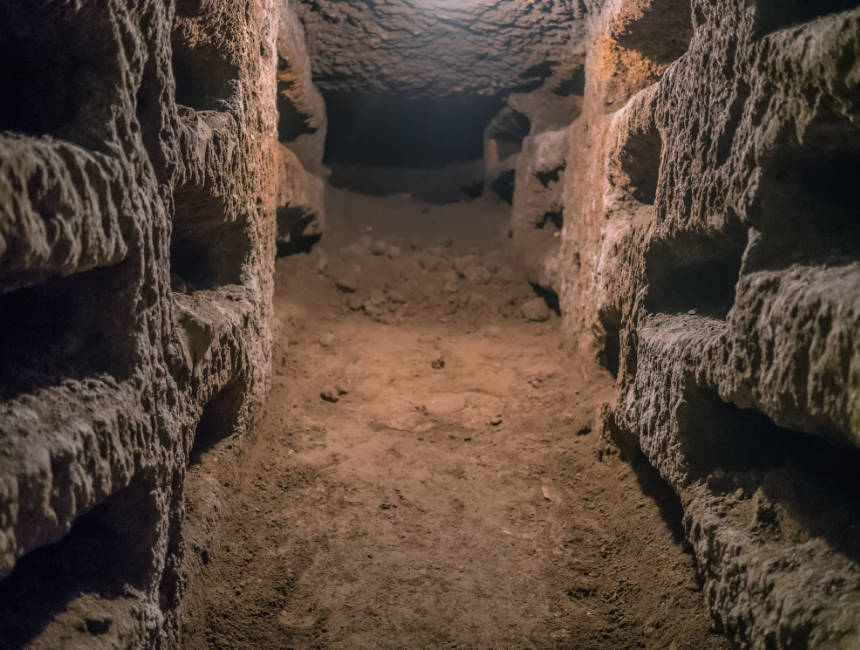 The catacombs of Callixtus

If you’re planning to visit only one of the catacombs of Rome, the Callixtus catacomb is an excellent choice because they are among the most important and largest in the city. In total there are four floors, more than twenty meters (60 ft) deep, with a network of nearly twenty kilometers (12 miles) of underground corridors. In addition to dozens of martyrs, sixteen popes are buried here. For that reason, the crypt has been nicknamed “the little Vatican”. Furthermore you can find the tomb of St. Cecilia here. She’s the patron saint of music. 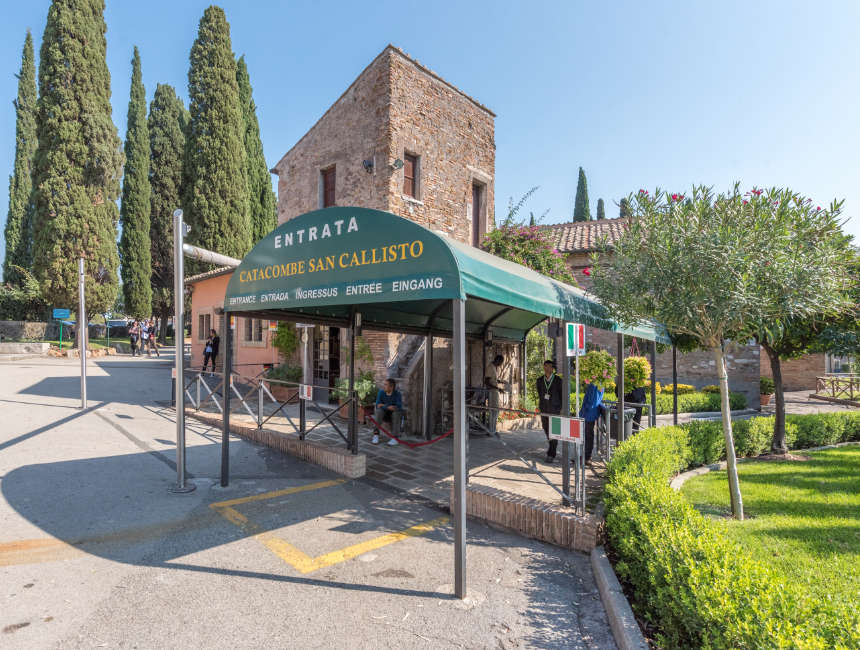 The entrance to the catacombs of St. Callixtus. Don’t forget that you can’t take any pictures once you’re underground.

The catacombs of St. Agnes

These Roman catacombs are located under the church of Sant Agnese fuori le Mura, which is dedicated to Saint Agnes, the only martyr buried here. She was one of the many Christians who were persecuted by the Romans at the time. What makes this Agnes so special? The fact that at the age of twelve she gave up life in a gruesome way: according to one source she was burned alive, decapitated according to another, and according to yet another, the veins in her neck were cut. Whatever it was, she has more than earned her martyrdom. If you want to give this brave girl a final honor, you know where to go. 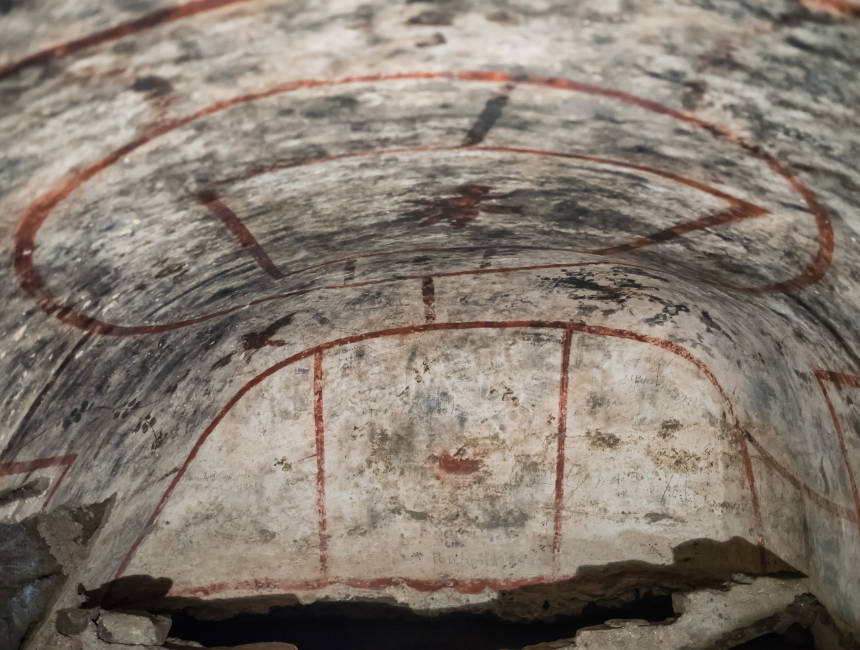 The catacombs of St. Agnes. A girl who was tortured in the most gruesome way…

The catacombs of St. Domitilla

These catacombs are spread out over four levels and more than seventeen kilometers (10,5 miles). They are the best preserved of all Roman catacombs and in total almost 150,000 bodies are buried here. In addition to a beautiful underground basilica, the absolute eye-catchers here are the beautiful frescoes that were discovered and restored in 2017. 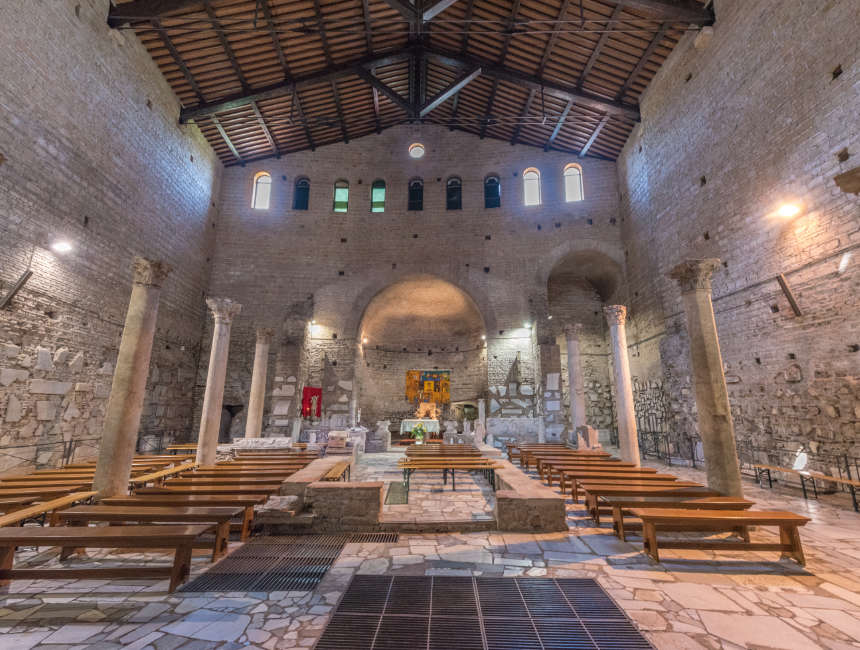 The church that is built on top of the Domitilla catacombs. A few steps down and you’re surrounded by creepy corridors!

The catacombs of San Sebastiano

These are one of the smallest and at the same time most accessible catacombs in Rome. This means that they are also the least well preserved. For example, one of the four original floors has almost completely disappeared. Nevertheless, the visit is worthwhile, especially if you want to admire the crypt of Saint Sebastian, one of the most famous martyrs. You may already have seen him in a painting where he is tied to a pole or tree, with a couple of arrows pierces through his body. In his crypt you can see a bust of him, made by the famous Gian Lorenzo Bernini. 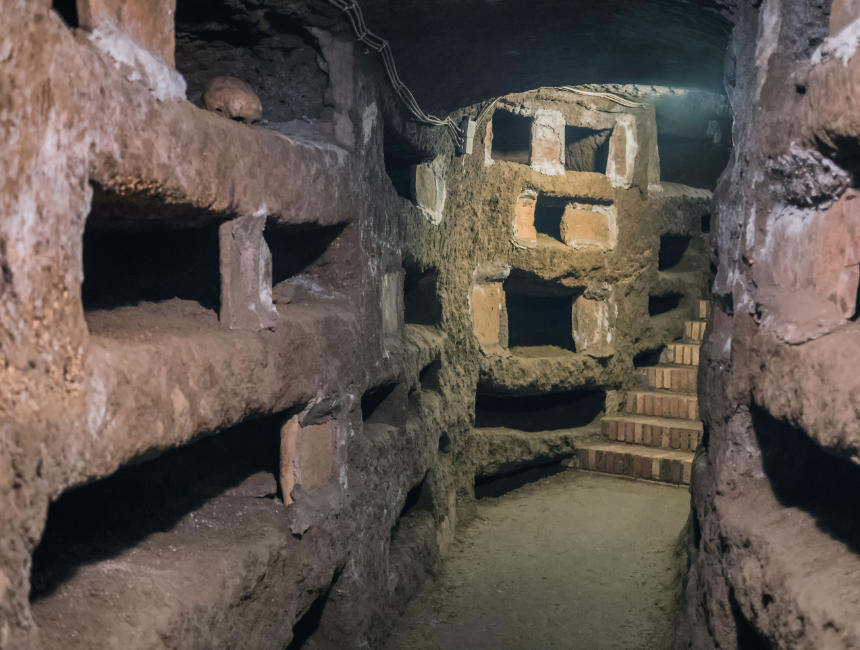 The catacombs of Rome are interesting to see, but at the same time quite creepy to walk through!

A visit to the catacombs of the Vatican can be compared with going to Tomorrowland: it’s difficult to get in, but once you get in, it’s an experience you’ll never forget. Unlike the other catacombs, which can be visited by everyone, you need to plan a visit to the catacombs under the Vatican City (a lot) in advance. And at the same time you’ll have to be lucky to be allowed inside. Only 250 visitors per day are allowed to admire this unique piece of history below the St. Peter’s Basilica with their own eyes. This happens in groups of up to twelve people. Do you want to try and score a ticket? Then send an email to scavi@fsp.va with the following information:

You’ll probably think if this is all worth it. Absolutely. This is the perfect opportunity to visit the crypt of Peter, one of the twelve apostles. On top of that, there is also a real necropolis or underground cemetery, dating from the fourth century. 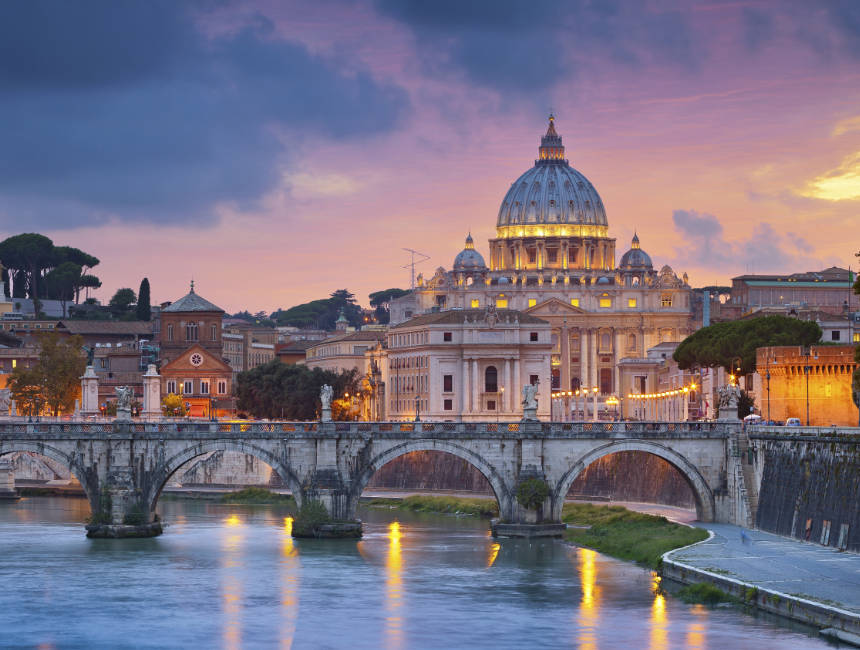 Under the St. Peter’s Basilica many saints are buried. If you want to visit them, you’ll have to plan well!

The Capuchin crypt in Rome

Under the church of the Santa Maria della Concezione dei Cappuccini lies the famous crypt that attracts visitors from all over the world. Of all the catacombs of Rome, this is without a doubt an outsider because here you won’t get to see any tombs. Here you get to see… human remains! This is not unique, because in Palermo and Naples you can also visit special places like this. a little closer you can also visit the catacombs of Paris. In Rome there are about 3700 bodies on display, the one better preserved than the other. The corpses of the Capuchin brothers are even preserved in their original clothing, which makes this an extremely macabre but also special experience. 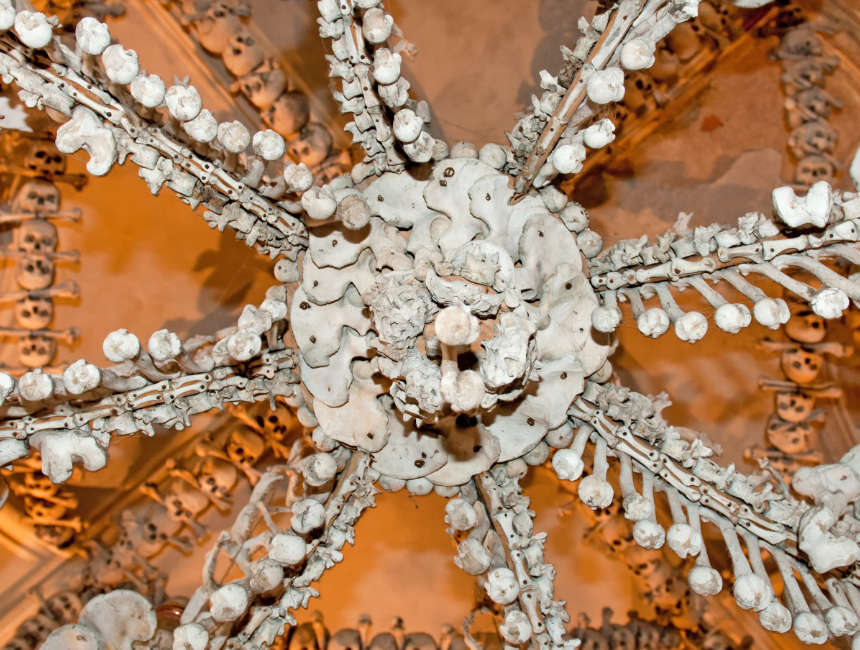 Unfortunately, you can’t take pictures here… This picture comes from the Sedlec Ossuary in the Czech Republic, so you get a bit of an idea of what it looks like inside.

Every catacomb has the same price. Adults pay eight euros for a ticket and children between seven and fifteen pay five euros. A guided tour is always included in the price.
If you prefer a tour in the catacombs of Rome, you can book excursions which include transport, guides and entrance fees.

Tips for visiting the Roman catacombs

When you visit the catacombs of Rome, you have plenty of choice, depending on your personal preference and the time you have available. If you want to combine several of the Roman catacombs, a day tour is an excellent idea. In any case, you should visit at least one of these unique sights in Rome! 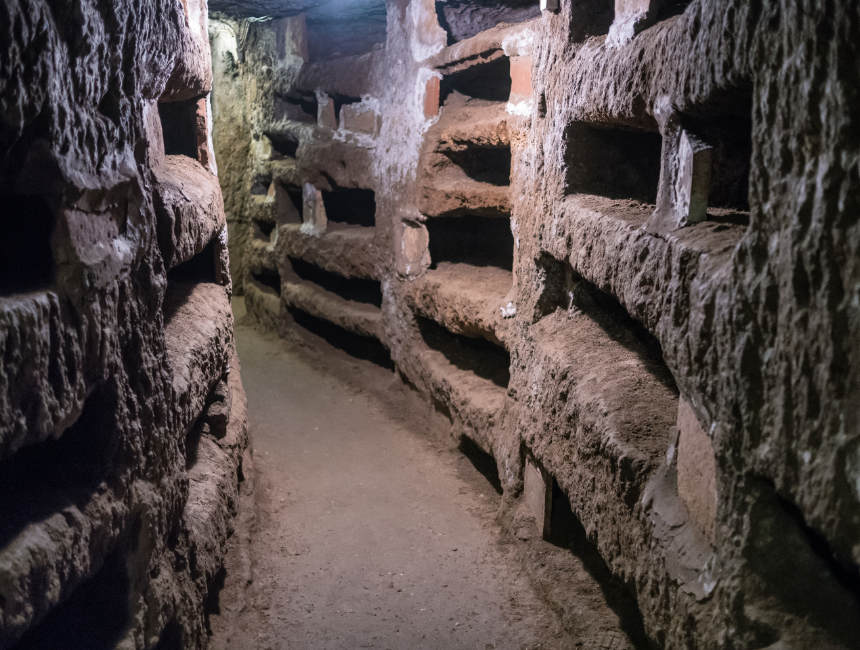 You’ll definitely get to learn new facts that you never thought of while strolling through the catacombs.

The Roman catacombs in Valkenburg

Have you been to Rome before, or do you currently have no plans to go and visit the eternal city? No problem! You can also visit the Roman catacombs in the Netherlands.
In Valkenburg, one of the marlstone caves was transformed into a perfect copy of the Roman catacombs (read more about these catacombs at the bottom of this article).
With a candle you enter the caves and get to see the Roman catacombs which are impossible to distinguish from the real ones.

The frescoes, wall drawings and some graves have been preserved much better because they are only about a century old. So… Perhaps, it’s even better to visit the Roman catacombs instead!
Another advantage of visiting these catacombs is that you can take photos here! 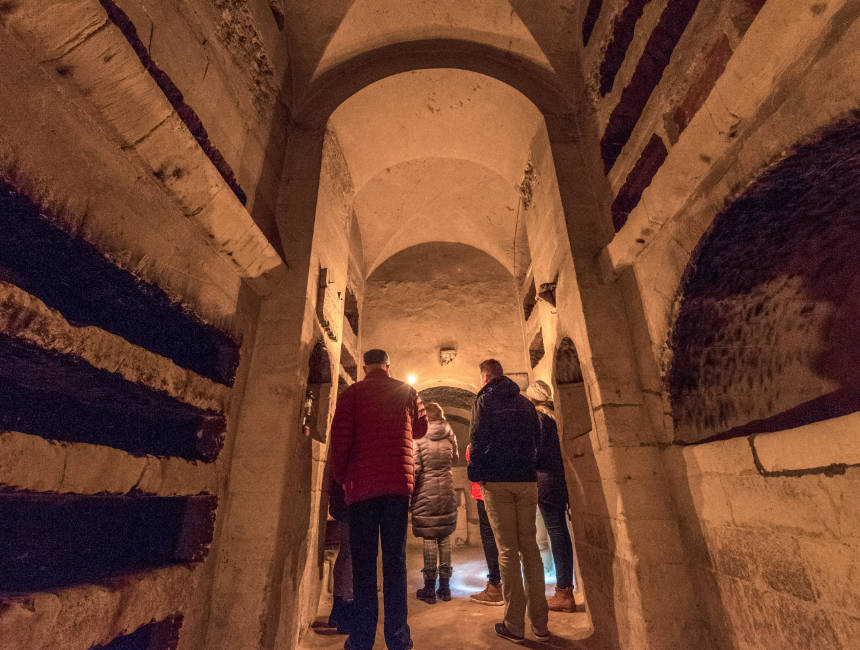 A copy of the real catacombs of Rome can be found in the Dutch Valkenburg.

Other catacombs in Italy

The catacombs of Rome are very interesting, but throughout Italy you can find many more underground networks!

Even more impressive are -in my opinion- the Catacombs of Naples.
These catacombs were used by the Romans and Christians, but much later in history they were still being used; to seek shelter from air bombardments during world war two. These corridors give a completely different view of life in this city, and each catacomb is unique in itself. You can plan several guided tours.

There are catacombs where you can find Christian graves, but also underground cemeteries in which you can visit Roman excavations. My favorite was the Galleria Borbonica and of course also Il Cimitero delle Fontanelle, where you can find thousands of bones and skulls. 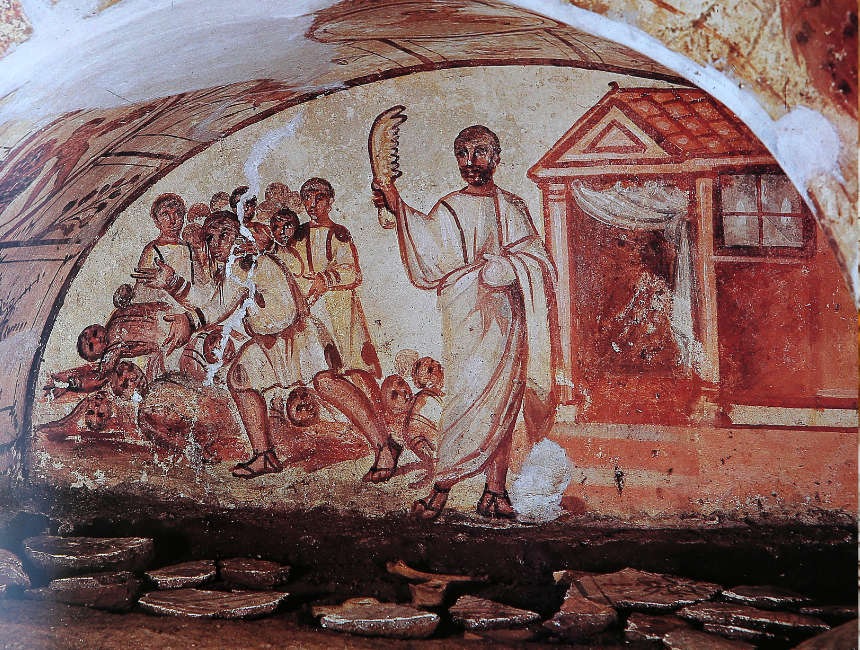 In some graves you can find some beautiful murals. The dead must also love art, I think!