During a road trip through Scotland, people think in the first place of the beautiful nature that the country has. However, culture should certainly not be forgotten and therefore a visit to Edinburgh Castle is an obligatory excursion during your visit to the Scottish capital. 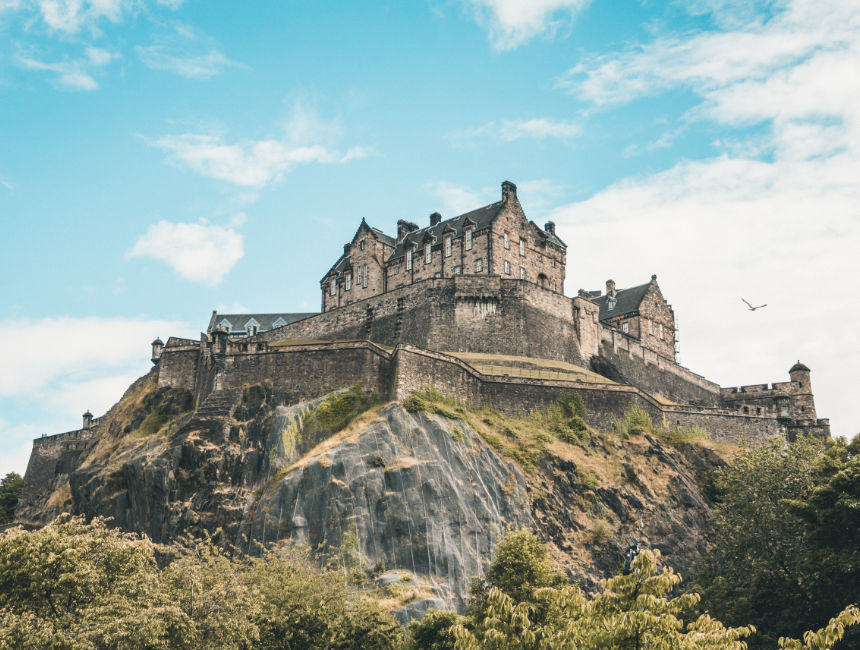 The history of Edinburgh Castle in a nutshell

Already in the Bronze Age they built a settlement on Castle Rock for the first time, but it is thought that a castle was only built in the twelfth century. Since the reign of David I until 1633 it was a royal residence. Afterwards it was used as military barracks, until it was recognized in the nineteenth century as an essential part of the Scottish national heritage. Today it’s the most visited landmark of the country, which yields two million visitors per year. 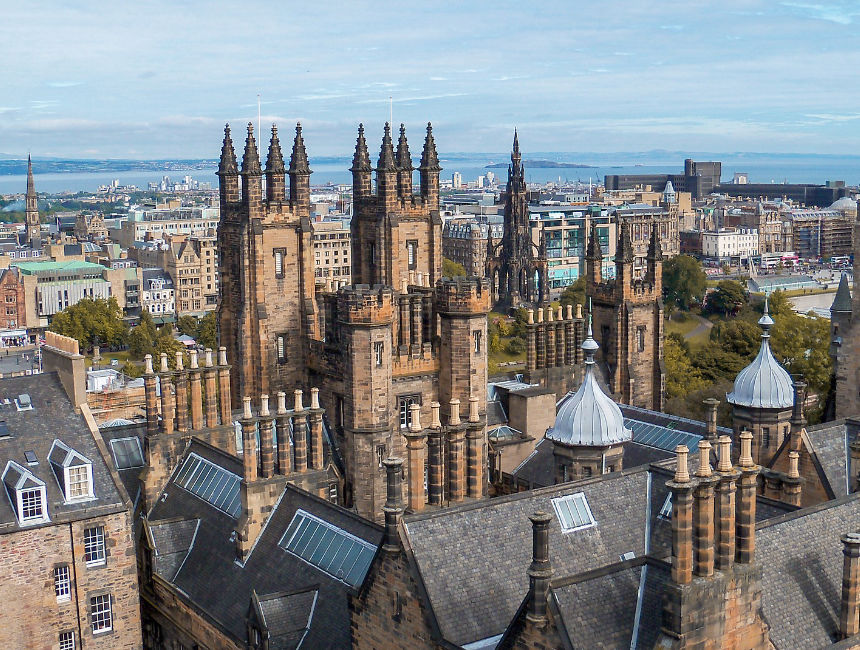 The main sights of the Edinburgh Castle

Of course, Edinburgh Castle is so much more than just a (very beautiful) pile of stones, because there is so much to discover within the walls. Once you have bought tickets (£17) to enter the inside of this famous castle, you’ll be surrounded by many beautiful rooms.
If you would like some more information about everything you see, it might not be a bad idea to book a guided tour either. A priority ticket with guide costs £29 per person.
In any case, you should not miss the following places when you visit Edinburgh Castle:

You should visit the royal palace not only for the rich interior, but also for its historical value. Many important events have taken place within these walls. Queen Mary of Guise (who vigorously fought against the Protestant reform) died here in 1560. But at the same time (six years later) her daughter Mary, Queen of Scots, gave birth to her son James VI at this location. This boy actually became king at barely one year old and united Scotland and England in 1603. His importance for the country can’t be underestimated and the tiny room where he first saw the light of day can also be visited.

In terms of fame, these crown jewels may be less popular when compared to those in the Tower of London, but in terms of splendor they are at least equal. The scepter was given to James IV by Pope Alexander VI and the crown was worn for the first time during the coronation of the aforementioned Mary of Guise in 1540.
It wasn’t until three years later that they were combined for the first time, when Mary Queen of Scots was crowned in 1543.
For years they were hidden (against the army of Oliver Cromwell for example), but in 1818 they were rediscovered by Sir Walter Scott, the famous writer who wrote Ivanhoe.

This hall isn’t only “great” to Trumpian standards, but also objectively one of the most beautiful rooms in the United Kingdom. In 1511 the works were completed in honor of James IV and the room is located in the heart of the castle.
The king couldn’t enjoy this beautiful room for very long, because he lost his life during the Battle of Flodden in 1513 when he was fighting the troops of Henry VIII (yes, the Henry VIII!). The walls are decorated with weapons and shields, and the beautiful wooden roof is supported by beams with engraved stones. If you look closely you can see thistles, the national symbol of Scotland. 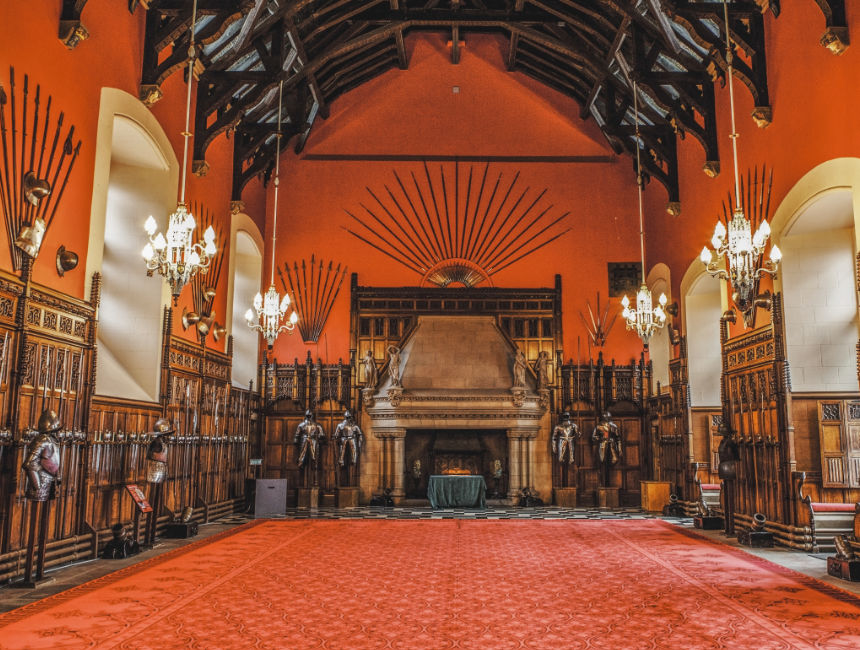 The Stone of Destiny

This epic-sounding stone is a powerful and ancient symbol of the Scottish monarchy, as it has witnessed the coronation of many kings. According to legend, it was used as a pillow by the patriarch Jacob when he dreamed of Jacob’s ladder (which reached to heaven). This holy object ended up in Scotland via Ireland.
In 1296 Edward I added it to his own throne and since then it has been used in the coronation ceremonies of the monarchs of England and afterwards of the whole of Great Britain.
800 years later the stone was brought back to Scotland, so you can now see it in Edinburgh Castle. Only when a coronation takes place in Westminster Abbey the stone can leave the castle (for a little while).

This chapel was built around 1130 by David I in honor of his mother Queen Margaret, making it the oldest building in Edinburgh. Nowadays, the chapel is still used for baptisms and weddings.

The one o’clock gun

Already in 1861 they fired this cannon so that ships could change their maritime clocks to the right time (which they needed to sail the oceans). Nowadays, the one o’clock gun is fired every day at one o’clock (except on Sundays, Christmas or Good Friday). 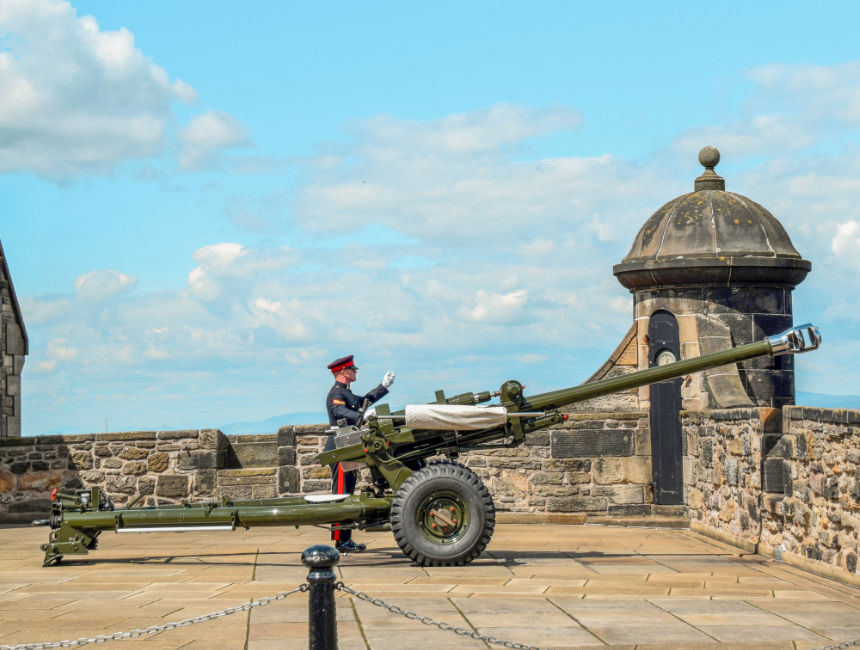 Are you ready for a loud bang? Don’t forget to cover your ears!

The Military Tattoo and Edinburgh Castle

Contrary to what the name suggests, this has nothing to do with permanently putting ink on your body. A Military Tattoo is in fact a military procession that is accompanied by a lot of music and in which the various army forces present themselves to the public.
In the Scottish capital this tattoo is part of the Edinburgh Festival, which takes place every year in August before the eyes of about 220,000 spectators. 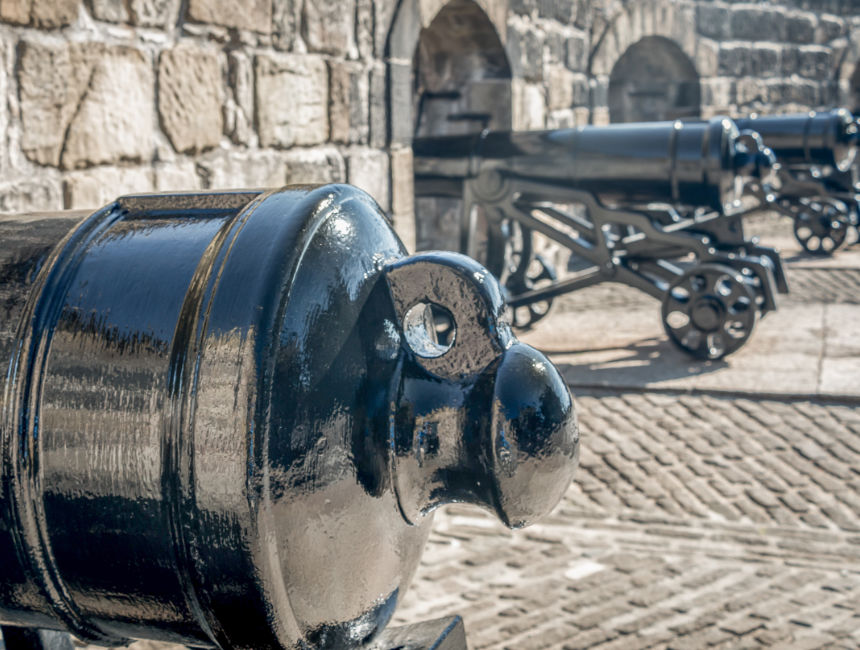 Fireworks, lots of bagpipes and a real spectacle. The Military Tattoo is impressive!

If you want to visit Edinburgh Castle, you’ll need to have a ticket. The entrance works with a timed ticket system. To be guaranteed to enter on the date and time of your choice, you must book your tickets in advance. On the spot you can also buy tickets, but then you can only visit Edinburgh Castle in the afternoon. To enter in the morning you must reserve at least one day in advance.

Tickets can be purchased through official partners of the Edinburgh Castle (including GetYourGuide, Tiqets and Ticketbar) and you pay the following prizes:

Audio guides are available in English, French, German, Spanish, Italian, … and you pay 3.5 pounds as an adult. Children pay 1.50 pounds.

Do you prefer a real-life guide? Then book one for £29 per person with priority tickets included.

During the summer months (March 26 to September 30) the castle is open from 9:30 am until 6 pm. During the winter months (1 October to 25 March) you can enter from 9:30 am to 5 pm. The last access is always one hour before closing time, but you need at least two hours to get the most out of your visit. So you should go in a bit earlier.
On 25 and 26 December the castle is closed, on January 1 it is open from 11 am to 5 pm. 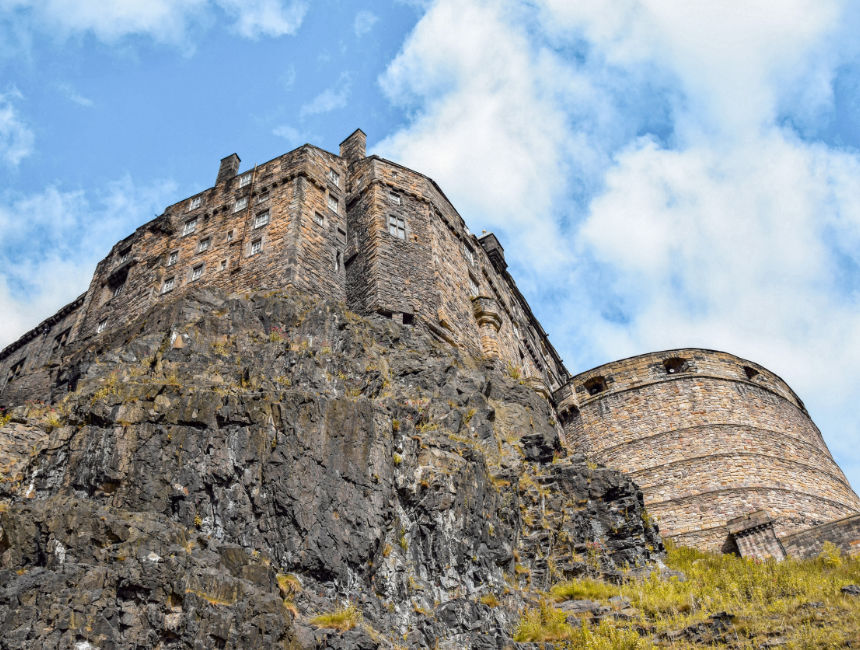 It’s a steep climb up to the castle of Edinburgh, but once you are there the views are beautiful!

Are you excited to visit Edinburgh Castle on your own? I promise that it’ll be one of the best experiences that you can have in Edinburgh! Be sure to take your time to take in every room and don’t forget to watch out for the ghost of the bagpipe player… 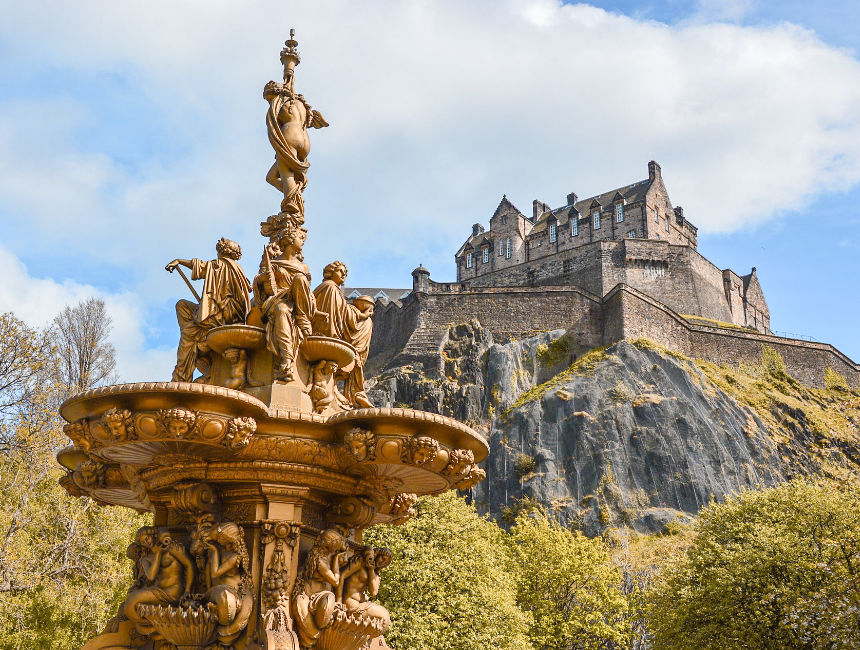 Whether you visit Edinburgh Castle or not, you see it from almost everywhere in the city!