The view from the Empire State building. Only then you can see how huge New York really is!

Most tourists are only interested in visiting the observation platform of the ESB. Of course, the view of the Empire State Building is breathtaking but this tourist attraction offers a lot more. In the lobby you can admire the beautiful art deco murals and there are also two interesting exhibitions: the ‘Dare To Dream‘ and ‘Sustainability’ Exhibit. And of course you should also visit the observation platform. Did you know that there even are two options?

The observation platform on the 86th floor is the tallest open-air platform in New York and has been seen in many films and TV shows. Here you can enjoy a 360° view of New York and beyond. Central Park, The Hudson River, Times Square, the Statue of Liberty, the Brooklyn Bridge, … you can admire all the important locations of New York City.
You can also go sixteen floors higher, up to the 102nd floor where you (if possible) get even more spectacular views. From here the whole city is visible and on a clear day you can see almost 130 kilometers / 80 miles far!

Tip: download the official Observatory Experience app that gives you more information about the view from any direction. 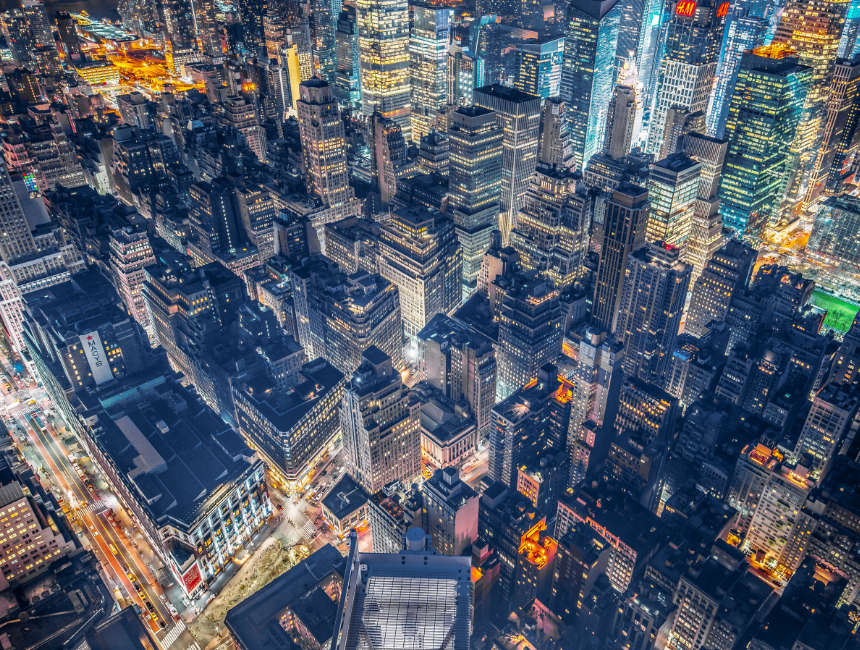 Day or night… The view from the ESB in New York is always phenomenal!

Empire State Building or Top of the Rock?

If you have booked a cheap city trip to New York, you must of course make some plans as well. Because there is a lot to see and do in NYC!
Next to the Empire State Building you can also visit the Top of the Rock. The Top of the Rock is part of the Rockefeller Center. Another iconic skyscraper located in New York. This building can also be climbed, so that from here you also get a phenomenal view of the Big Apple.

A question that almost certainly will occur during your trip to New York is: “Where do you get the best views over New York? Is it from the Empire State Building or from the Top of the Rock?”
And the answer to that questions differs from person to person… So I can’t make that choice for you. But… I can give you some facts and insights which will make the choice a lot easier!

The view from both buildings

Personally, I have to admit that I like the view from the Top of the Rock most.
From the Rockefeller Center you get an unobstructed view of the city. There are several viewing platforms that you can visit. From the lowest point you can lurk behind the glass walls to the city. One floor higher you can even look at the city without any hindrance. Do you have fear of hights? That’s not necessary at all! Because this top floor is only a few meters higher than the large viewing platform, but then without the scary views if you look straight down.
From the top level of the Top of the Rock you can see: Empire State Building, Chrysler Building, One World Trade Center, Central Park, Bank of America Tower, Flatiron Building, …

The viewing platform of the Empire State Building may be slightly higher, but your view is obstructed a little more. The entire platform is covered with metal fencing so that no accidents can happen. Good for safety, but unfortunately less great for your selfies!
From the Empire State Building you can see the following iconic buildings: Rockefeller Plaza Center, Chrysler Building, One World Trade Center, Central Park, Times Square, Statue of Liberty, Brooklyn Bridge, …

For a photo of you with NYC as your background, I would therefore choose the Top of the Rock.

The location of both skyscrapers

Both buildings are located in the city center, about one mile apart. The Empire State Building is closer to the financial district of New York, while Top of the Rock is much closer to Central Park and Times Square.

The price of both viewpoints

Tickets for the Empire State Building cost $36 per person. An admission ticket for the Rockefeller Center viewing platform costs $34.

Do you find it difficult to make a choice? Then think of buying the New York Pass. A useful solution if you plan to visit multiple sights and museums. For about $90 / £62 / €70 you get access to dozens of attractions, including the ESB and the TofR.

If you want to read more about the Rockefeller Center, read this article with pictures and tips. 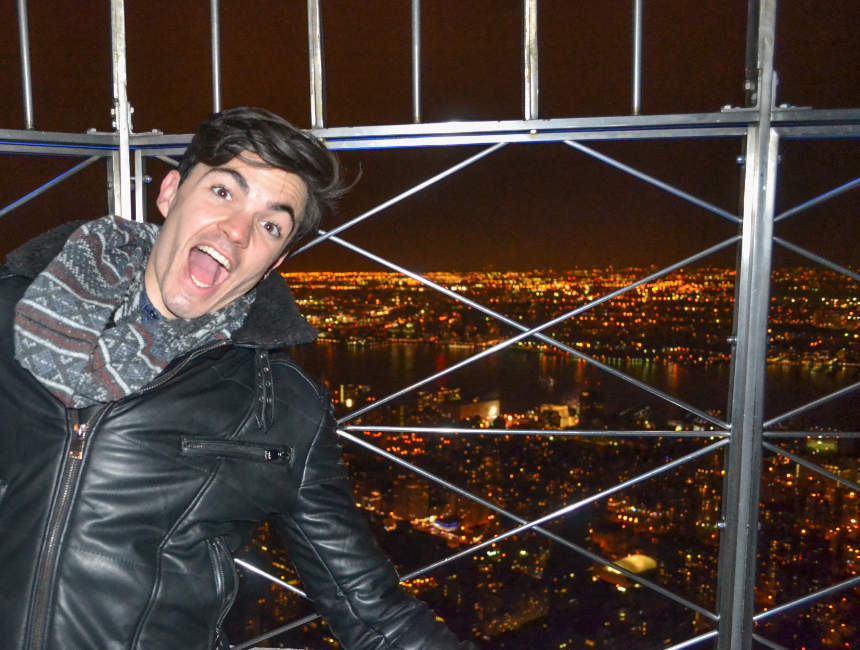 A little crazy has never hurt nobody! Or… Perhaps I’m making funny faces because of the thin air up so high?

A brief history of the Empire State Building

In the early eighteenth century there wasn’t a 102-storey giant towering over NYC yet. On this location there stood a farm owned by a certain John Thompson. In the late twenties of the nineteenth century he sold the land to the Astor family, who set up a Waldof-Astoria hotel here at the end of the nineteenth century. It wasn’t until the twenties of the nineteenth century that it became the property of Empire State Inc., a business in the name of businessman John J. Raskob and Al Smith, the former governor of New York. They dreamed of a skyscraper of (barely) 50 floors, but these plans were revised no less than fifteen times. They started construction on March 17, 1930 and they completed (!) one floor a day! Eventually the building became 380 meters high (443.2 meters if you count in the antenna) with which it was the tallest building in the world for almost 40 years. At that time, the creation of Shreve, Lamb & Harmon had become an absolute symbol, thanks in part to appearances in many films and television shows. The most legendary scene is undoubtedly the one in which King Kong climbs the Empire State Building. The name from the building derived from Empire State, the nickname of New York. 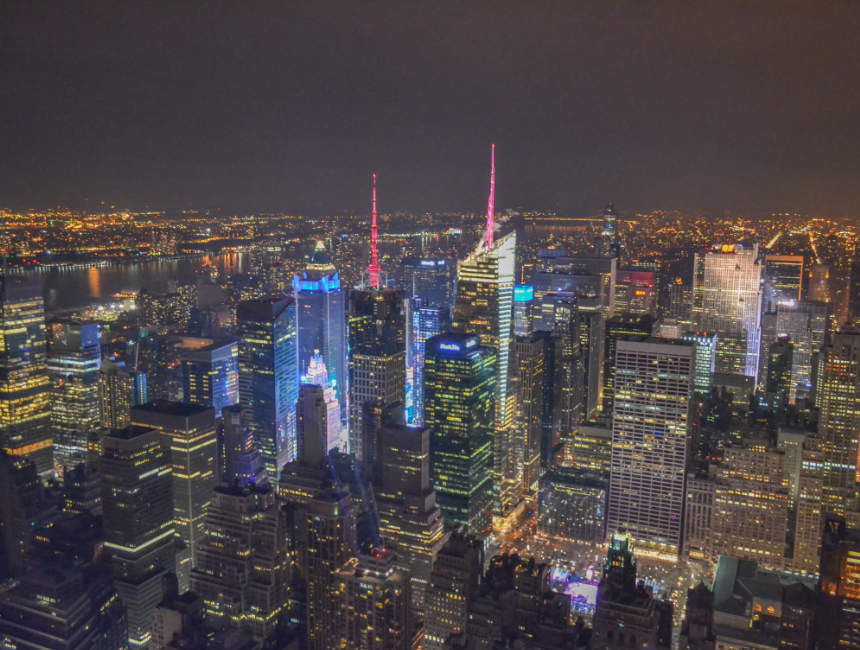 The viewing platform of the ESB gives an amazing viewpoint over NYC!

You have many choices when you visit the Empire State Building. You can choose from the following options:

You can purchase all these tickets from various tour operators. I always buy my tickets from GetYourGuide, Viator or Tiqets, because they never have to worry about a cancellation if your plans have changed.
If you’re planning to visit many tourist attractions in New York City, you may want to purchase a New York CityPASS. For €70 to €100 / £62 to £90 / $83 to $125 (adults and kids have other entrance fees) you get access to the following sights of NYC:

Since you’re most likely planning to visit several of these attractions, it would be rather unwise to spend a lot of money on separate tickets.
You should book your New York CityPASS online because they often give quite big reductions on the world wide web.

Visit the Empire State Building around the evening. So you can see NYC during the day, at sunset and when the city is all dark. Three views for the price of one!

The Empire State Building is open every day of the year. You should arrive at eight o’clock in the morning when the observation platform just opens to avoid the crowds. If you prefer to sleep a bit longer, it’s best to come around noon when most people have lunch.
Surprisingly, this skyscraper is always open until two o’clock at night! The last lift elevator up leaves at 1:15 AM. Towards the end there are obviously fewer people. From Thursday to Saturday there is always a live saxophonist up high from 9 PM to 1 AM. And yes, he plays request numbers!
From April to June and from September to early November it is the quietest period to visit the Empire State Building and by extension New York City. The weather is still very pleasant and there aren’t too many tourists.

Together with the Rockefeller Center, the Empire State Building is the skyscraper you shouldn’t miss during your visit to NYC. A good tip is indeed to visit the first during daytime and the second in the evening, so you always get a different and equally impressive panoramic view of this fantastic city.

Your view will be blocked a little, but it still is incredibly impressive to visit this gorgeous skyscraper.

Tip: Book your tickets in advance online. This way you won’t have sold-out tours or long waiting lines. Online tickets can be booked with these recognized tour operators.

» All tours in NYC

» All hotels in New York.