What the Eiffel Tower means for Paris and the Burj Khalifa for Dubai, that's what the Petronas Twin Towers are for Kuala Lumpur. A visit to the Malaysian capital is therefore not complete without having seen these imposing towers. That's why I tell you everything you need to know, so that your visit of the Petronas Towers will be perfectly planned.

Do you want to climb the Petronas Towers? 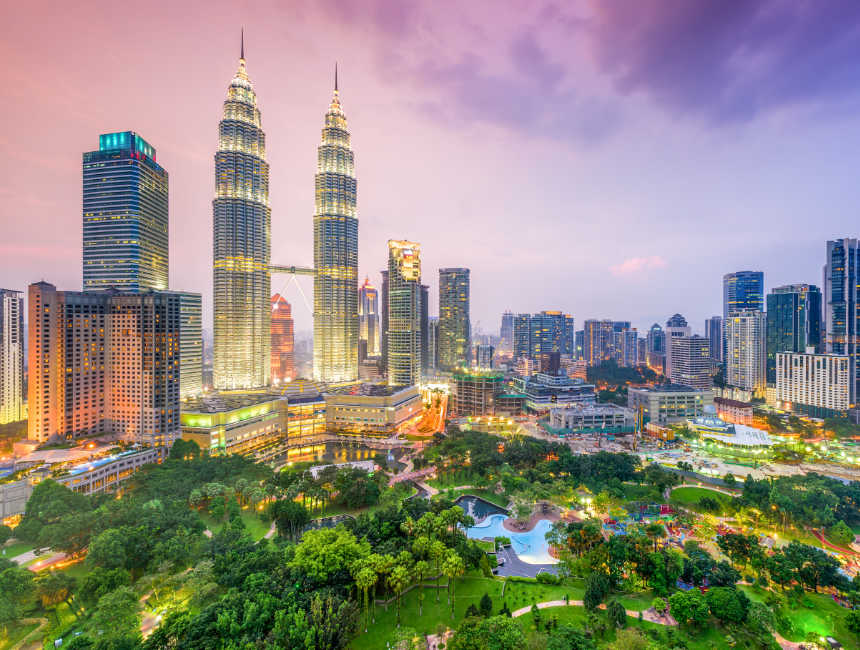 A beautiful panorama over the petronas twin towers at sunset.

The Argentinian architect Cesar Pelli was given the honor to design a tower complex with which Kuala Lumpur could enter the 21st century. His first sketch was rejected by the Prime Minister because it was not ‘Malaysian’ enough. After some reflection he was inspired by the Islam (the national religion of Malaysia) and this is reflected in the steel and glass façade. This is constructed to resemble the motives from Islamic art.
Another Islamic influence is the cross-section of the towers based on a Rub el Hizb, a Muslim symbol that consists of two squares that overlap. Thus they form an octagon together with a circle in the middle. Although the architect added some circular sectors, so that more office space became available.

On 1 March 1993 the work was started and exactly three years later the construction was complete. In total, the national symbol cost 1.8 billion dollars.
On 1 August 1996 the Petronas Twin Towers were officially inaugurated. During the opening, the towers, with their height of 451.9 meters or 1482 feet, were the highest building in the world. This would remain so until 2004 when Taipei 101 took the first place from the twin towers. Today, the Petronas Towers are the twelfth tallest construction in the world. As for identical buildings, the towers are still number one.

Since the buildings are called the Petronas Towers, you can already guess who they are named after. Petronas is the abbreviation of Petroliam Nasional Berhad and this is the largest oil company in Malaysia which is also owned by the state. It’s no wonder that the headquarters are located in the Twin Towers. In the second tower there are offices of, among others, Huawei, Boeing, IBM, Reuters and Microsoft.

With such a view I would also like to have an office here! Fortunately, you can also just visit the Petronas towers.

What is there to see in the Petronas Twin Towers?

The Twin Towers of Kuala Lumpur are more than just towers. In the building you will find the following points of interest:

At the foot of the Petronas Towers lies Suria KLCC, a shopping center with an area of ​​no less than 140,000 square meters. This makes it one of the largest shopping centers in the country. It consists not only of luxury shops but also of an art gallery, the national philharmonic theater, a science center and an aquarium. Especially the latter is very nice to visit. Adults pay just under fourteen euros for a ticket, children up to twelve years pay twelve euros.

The surrounding area is a very cool park where you can jog and walk. But the absolute attraction here is the fountain. Every evening a special light and water show takes place here, accompanied by appropriate music. Sit down on one of the benches and enjoy the spectacle!

This is the absolute top attraction and the only thing you have to pay for when you visit the Petronas Towers. On the 41st and 42nd floor there is a double decker air bridge that connects the two towers. This makes it the highest bridge in the world consisting of two floors. In order to ensure that the bridge wouldn’t break, it was designed to slide in and out of the towers instead of directly attaching them. This also provides extra support for the Petronas Twin Towers.
The air bridge is hanging 170 meters (558 ft) above the ground and is 58.4 meters (192 ft) long. In total it weighs 750 tons. 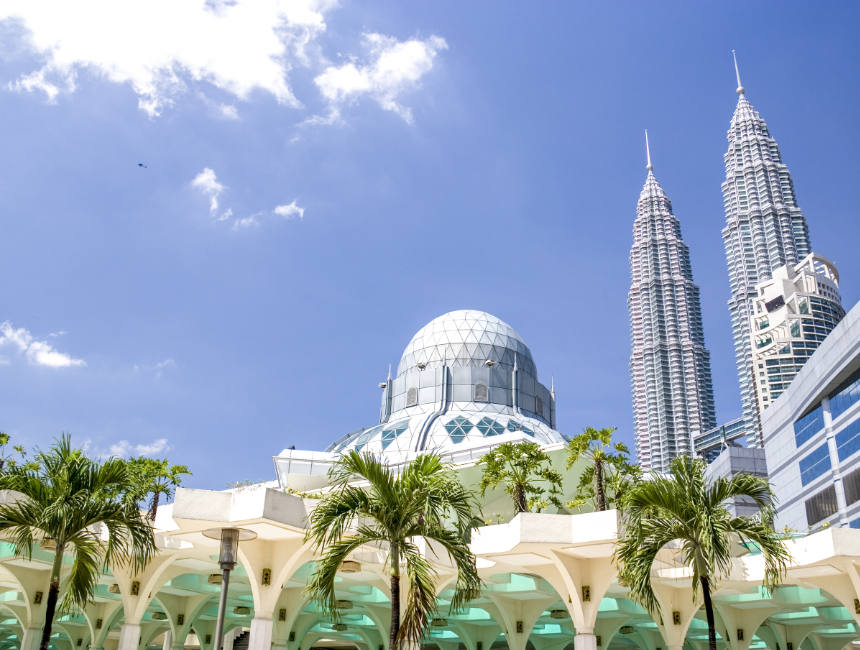 KLCC Park completes the Petronas Towers according to me! A beautiful green oasis, near a beautiful piece of technology!

» All guided tours and tickets in Kuala Lumpur

What to expect during your visit?

You start your tour with interactive screens that tell the whole story from abstract idea to concrete construction. You then step into a futuristic elevator that brings you to the skybridge. To finish the visit you go even further to the 86th floor, where you can enjoy a truly breathtaking view from the observation platform. 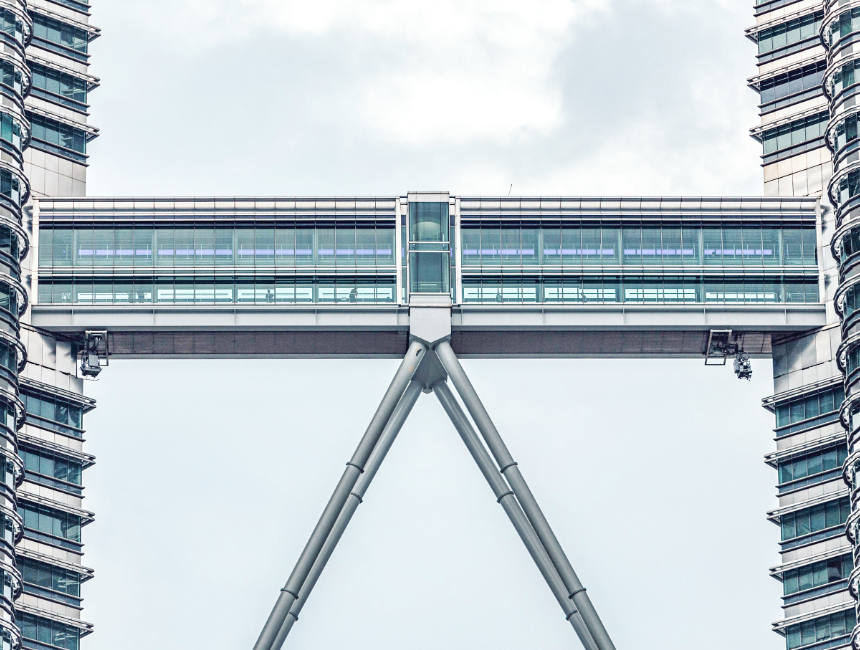 If you’re going to visit the Petronas Towers, you’ll also walk on this Sky Bridge. A beautiful panorama from a dazzling height! 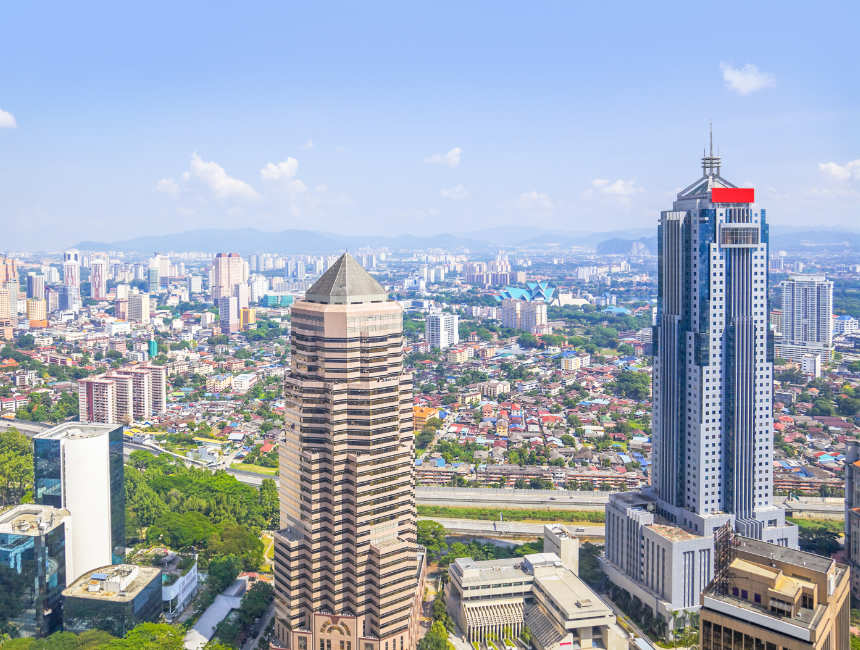 And the view from the Petronas Towers isn’t bad either, right? 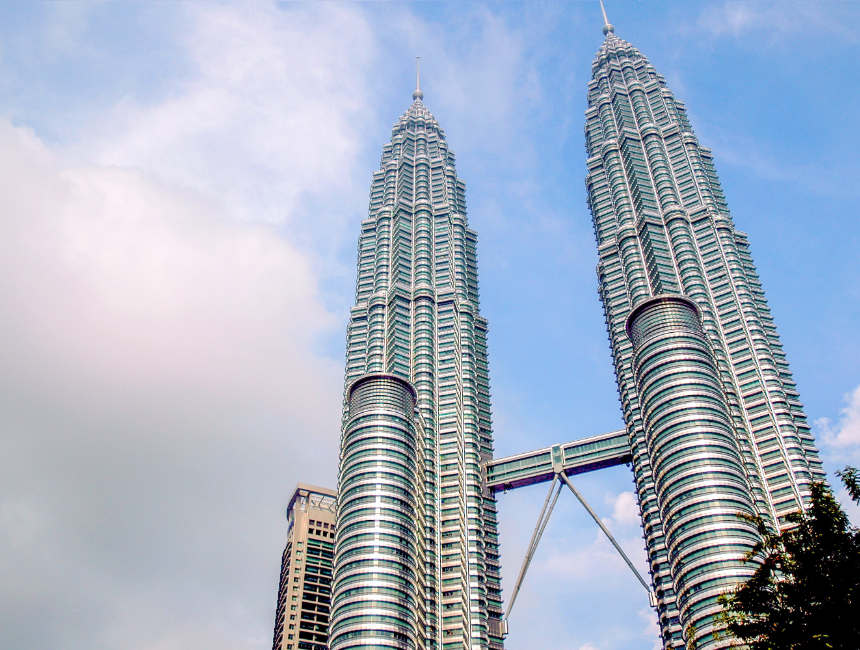 Inside or out… These identical towers look stunningly beautiful!

Ten fun facts about the Twin Towers of Kuala Lumpur 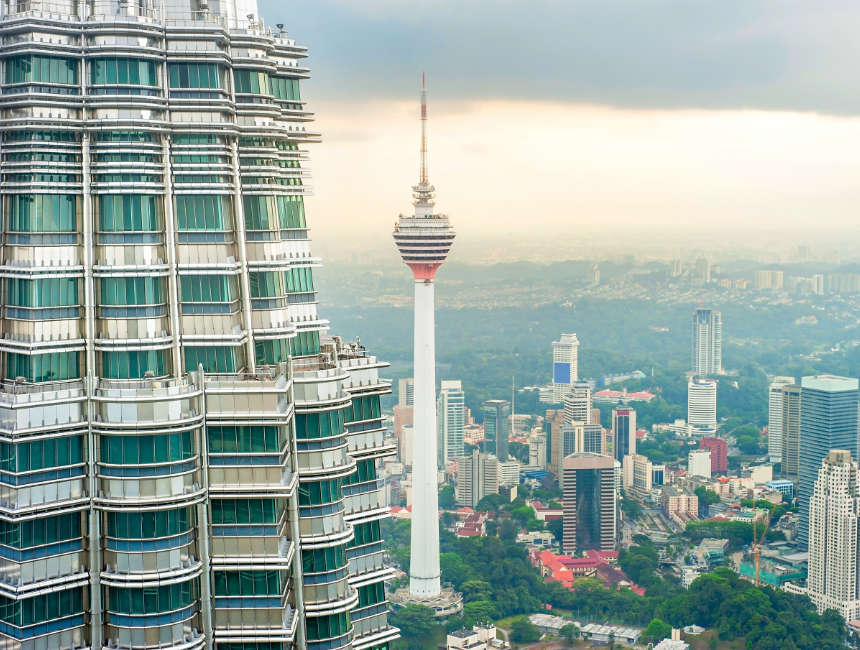 From the Sky Bridge you also get to see some other attractions of Kuala Lumpur!

The Petronas Twin Towers are an absolute landmark of Malaysia and have put the country on the map. You don’t necessarily have to buy a ticket for the sky bridge, because walking in the shopping center and in the surrounding park is just as nice. The nicest selfies or photos are taken at the back entrance of the building (not on the side of the park).

9 places to see in Malaysia