Did you know that Santa has an official place of residence? And that you can visit him? You can find him in Rovaniemi, Finnish Lapland, where there are also many other fun things to do. You can go reindeer or husky sleighing while looking for the northern lights and during the winter months you can have a whole lot of fun in the snow. Quickly read on and discover everything about Santa Claus and Finland and more tips for an unforgettable holiday to Lapland. 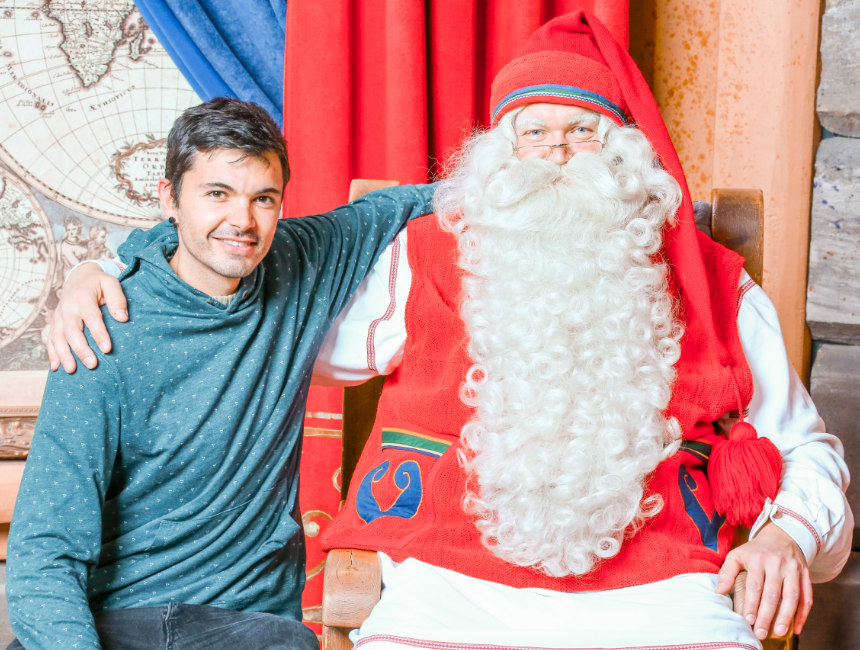 I got to see Santa in Lapland and I’ll tell you in this article how you can to!

Where does Santa live? In Rovaniemi!

Rovaniemi has been the official hometown of Father Christmas since 2010 and you can visit Santa in Lapland on every day of the year. His original home is in the so-called Korvatunturi (“Ear mountain”) in Finnish Lapland. But only a couple lucky people know the exact location, which made Santa decide to move to Rovaniemi, the capital of Lapland.
The city was however almost completely destroyed during the Second World War and five years after the end of it, Eleanor Roosevelt (the wife of Franklin D. Roosevelt, the American president at the time) came for a visit to see how the rebuilding process was going. She also wanted to check out the Arctic Circle and that’s why they decided to build a cabin eight kilometers north of the town. This put things in motion for the village of Santa Claus in Rovaniemi. The original hut can still be seen next to the post office in the home of Santa Claus in Finland.
More than half a million visitors from all over the world have visited Santa in Lapland ever since. Most of them get there a month before Christmas, when the charitable man with the beard officially kicks off the Christmas season.

Santa Claus Village in Rovaniemi is magical during the winter season.

It won’t come as a shock that the village of Father Christmas in Lapland is the most famous attraction in the country. Apart from restaurants, shops, cafés and hotels you’ll also find the following things here, which are guaranteed to put a smile on your face:

Since 1985 Santa has received over fifteen million letters from almost 200 countries. In the post office in Santa’s Village you can’t only write letters to Santa Claus in Rovaniemi, but also to the home front. That’s how your letter gets a special Arctic Circle stamp which can’t be found anywhere else in the world.
8,5 euros will by the way get you a letter written by Santa himself, which is a great way to surprise your friends. 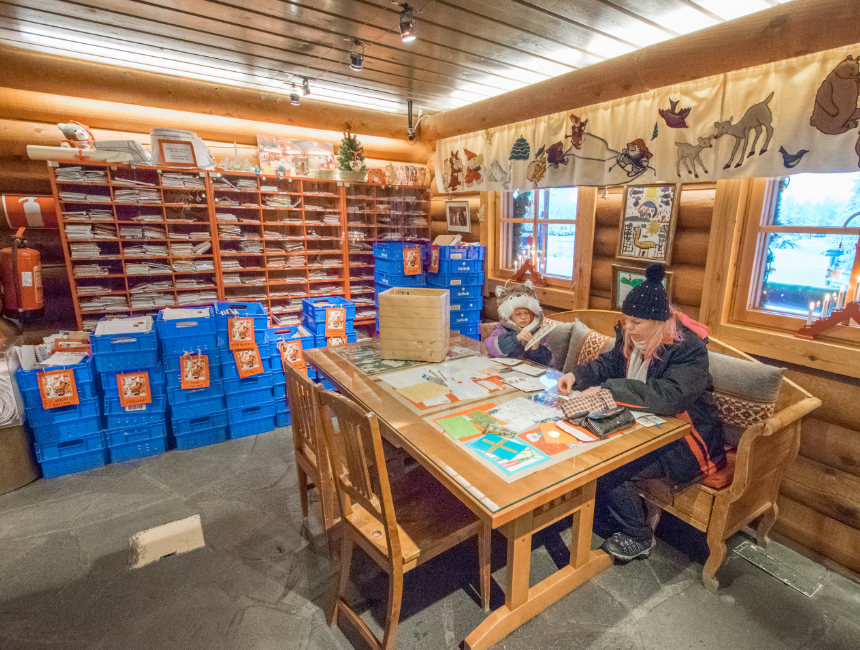 One thing I know for sure: Santa will have a lot of work sending out all those letters on time!

When you’re walking around in the village of Santa in Lapland, the little elves will undoubtedly catch your eye. They work for Father Christmas and ensure that everything is going accordingly. You can even take a class in Elf school to earn a magical degree. Which is always an added bonus on your résumé, isn’t it?

Unfortunately, there are no flying reindeers to be visited, but (in winter and spring) you can go for a ride on a regular reindeer sleigh and visit a reindeer farm.
You can book the following rides:

Five euros will also get you an official reindeer driver’s license.

If you prefer going to an actual reindeer farm (where you’re also being hauled around by the animals), you can also book other field trips in Rovaniemi: 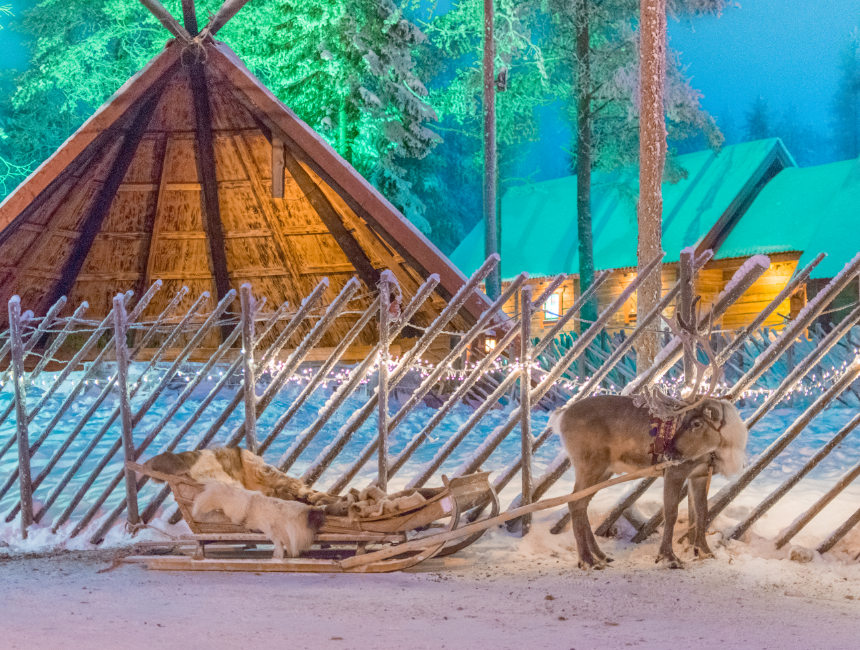 Let yourself be taken in tow by these magnificent animals.

You will also find almost 100 Siberian huskies in the village of Santa in Rovaniemi. You can take them for a walk in summer and go sledding in winter.
You can either just visit the park and then you’ll pay 10 euros for a ticket as an adult and 5 euros for children (from four to twelve years). This includes a guided tour of 30 minutes.
If you want to take the huskies for a walk, it will cost 50 euros per person (1 husky for 2 people) or 70 euros per person (1 husky per person). This allows you a total time of 90 minutes which you can spend walking in the forest.
If you want to go for a ride on a husky sleigh, you’ll have to cough up 30 euros for an adult and 15 euros for a kid, which will get you a tour of half a kilometer. Of course you can cover longer distances and then you’ll pay almost triple the amount when sharing the sleigh with two people. Book your husky adventure already online to make sure this fun activity isn’t sold out when you get there. You can also do it online through this official tour operator.

What does a visit to Santa in Lapland look like?

All these awesome activities are fantastic of course, but meeting Santa up close is needless to say the ultimate thing to do on your trip to Lapland.

You enter a room, where the smiley man is awaiting you on his throne/chair. Next he asks you where you’re from, shakes your hand and says hello in Finnish (which is “mooi”). Then you pose for a picture and after a little chat your child gets a certificate which says he or she has been good boy or girl (because of course he or she has?!).

Do bear in mind that you can’t take pictures yourself, but there’s the possibility to pay for videos and photos which are taken of you. This will cost you 40 euros. If you don’t want any pictures and just want to meet Santa, you don’t have to pay for the privilege. 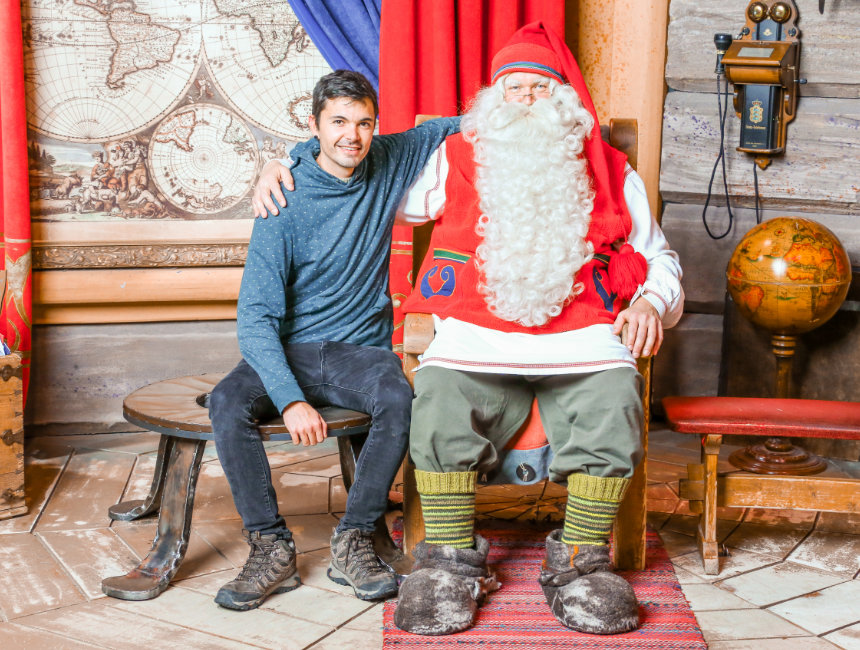 Yipee! I got to meet Father Christmas in Lapland!

Great places to spend the night in Rovaniemi

Of course you can spend the night in Santa Village itself, in the Santa Claus Holiday Village to be precise. For a standard room you’ll pay 149 euros for two adults. Traveling with two children? Then it will cost you 209 euros.
Do pay attention to the fact that during the high season (from the 13th of November until the 31st of March) you’ll have to stay for at least two and sometimes even three nights.

To complete your visit to Santa in Lapland, there are quite a few other great ways to spend the night.

In the Arctic SnowHotel you can (as the name suggests) be in the arms of Morpheus between walls of snow. Moreover, you can dine in the ice restaurant! You’ll easily pay (depending on the period) 350 euros per night for the experience.

A slightly cheaper and yet at the same time a lot more luxurious option is the Arctic TreeHouse Hotel, where you also get to experience the northern lights in a unique way. It gives you a spectacular view over the tops of the trees and this on only a ten-minute drive from the center of Rovaniemi.

Another way to enjoy the aurora borealis is a glass igloo, like the Arctic Glass Igloos. For this you’ll also easily pay 350 euros per night, but it is an unforgettable experience. Do keep in mind that you’re not guaranteed to see the northern lights, this depends on a great number of factors. 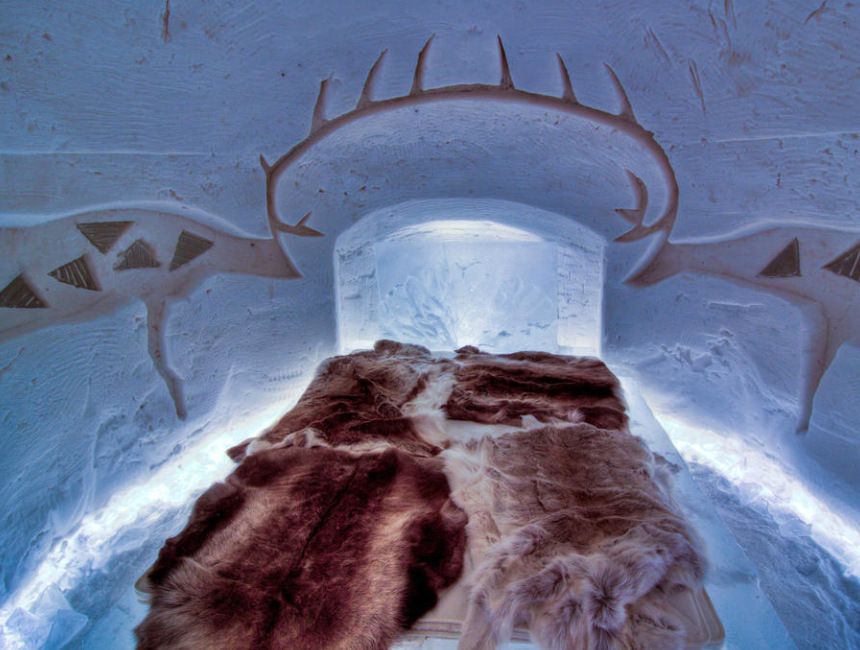 Other activities during a holiday in Lapland near Rovaniemi

It’s not just about Santa Claus in Finland, but also about the aforementioned aurora borealis. There are different ways to discover this spectacular light show, ranging from a car to a snowmobile to a reindeer sleigh. From the end of August until the beginning of April you have the best chance to see the northern lights in Lapland. You can get a fun field trip to the aurora borealis starting from €75 per person. If you want to have a look at every possibility (and prices), you can do so here. 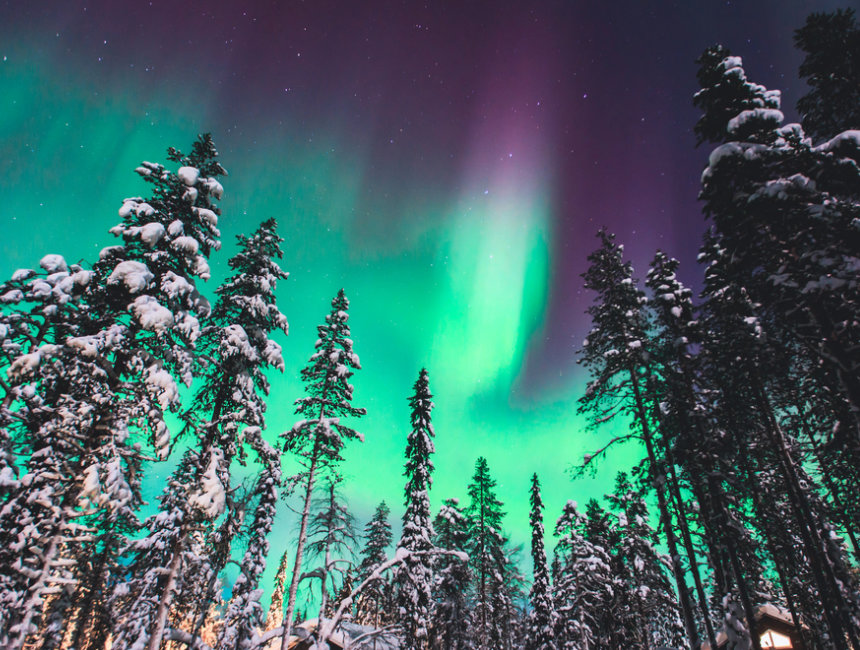 In my opinion the northern lights will always be one of the most beautiful natural phenomena.

Fun on the snowmobile

Adrenaline junkies can have a field day during a tour by snowmobile. Racing through this astonishing nature is an adventure you’ll never forget.
For an hour on a snowmobile you’ll pay 79 euros per person. For longer rides (3 to 4 hours) prices start at 100 euros per person. 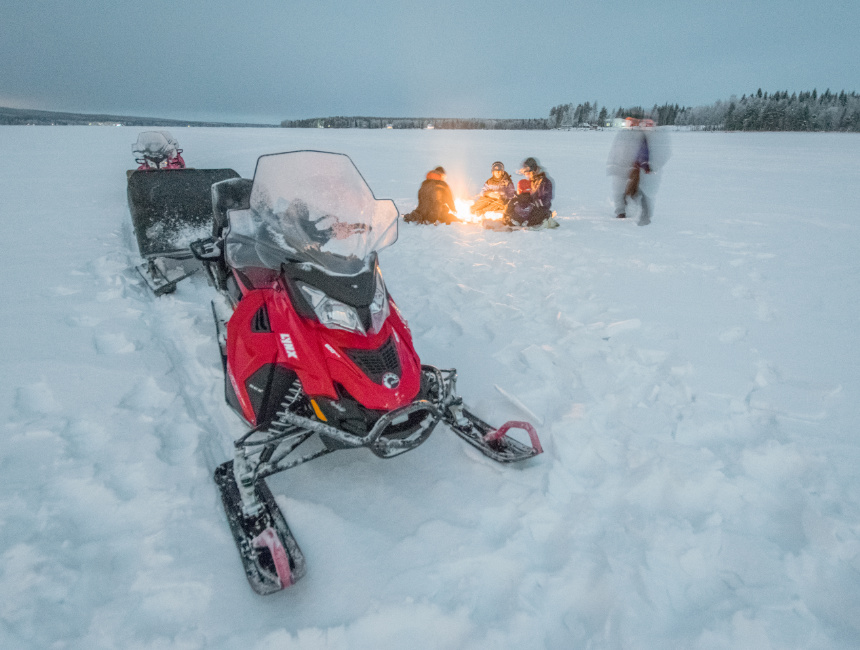 How fast do you dare to go?

And a lot more…

During winter you can go snowshoeing, skiing, fatbiking, Arctic Ice Floating, ice climbing, sail with an icebreaker, experience the world-famous Finnish sauna or have an amazing dinner in an actual igloo and so much more.

During the warmer summer months, you can go kayaking, stand up paddle boarding, jet skiing, horseback riding, cycling, … You’ve already understood that you’ll never get bored during a holiday in Lapland. 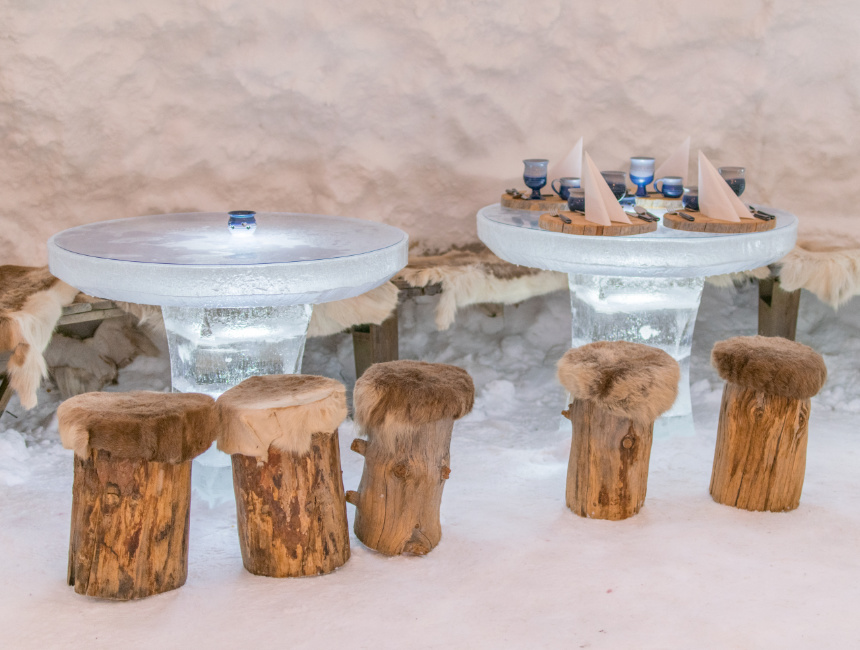 Going to see Santa in Lapland for Christmas? Then a Christmas menu in this igloo might be a fun idea!

Opening hours and how to reach Santa’s Village in Rovaniemi

You can go see Santa in Lapland on every day of the year and there’s no entrance fee to get into Santa’s Village. You only have to take the following opening hours into account:

From Rovaniemi you can take the local bus 8 or the Santa Express and they leave every hour from the center. Sporty types can also walk the total distance of 8 kilometers or you can also drive yourself.
When arriving by plane, you’re even closer because Santa’s Village is barely three kilometers from the airport. 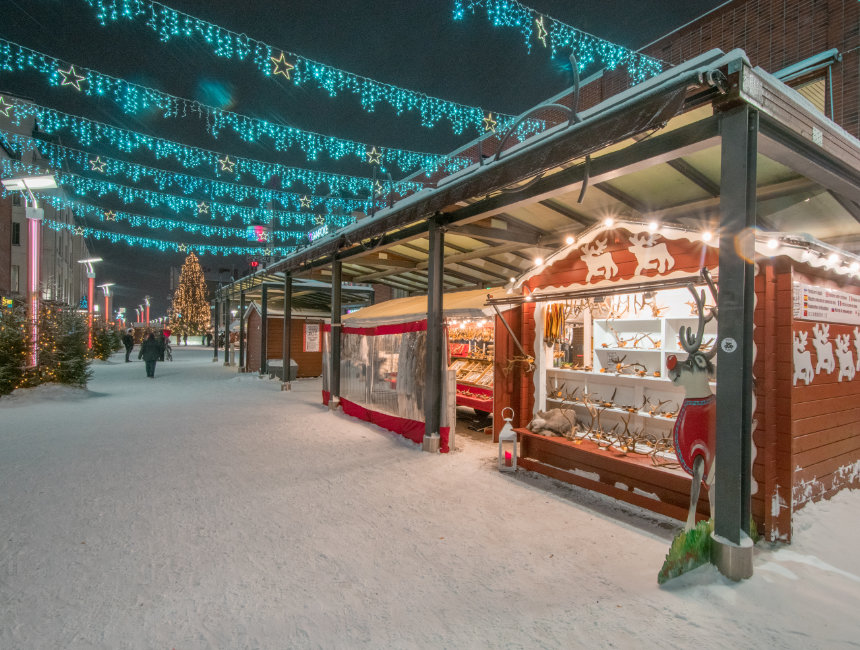 A holiday to Rovaniemi isn’t complete without visiting Santa in Lapland! 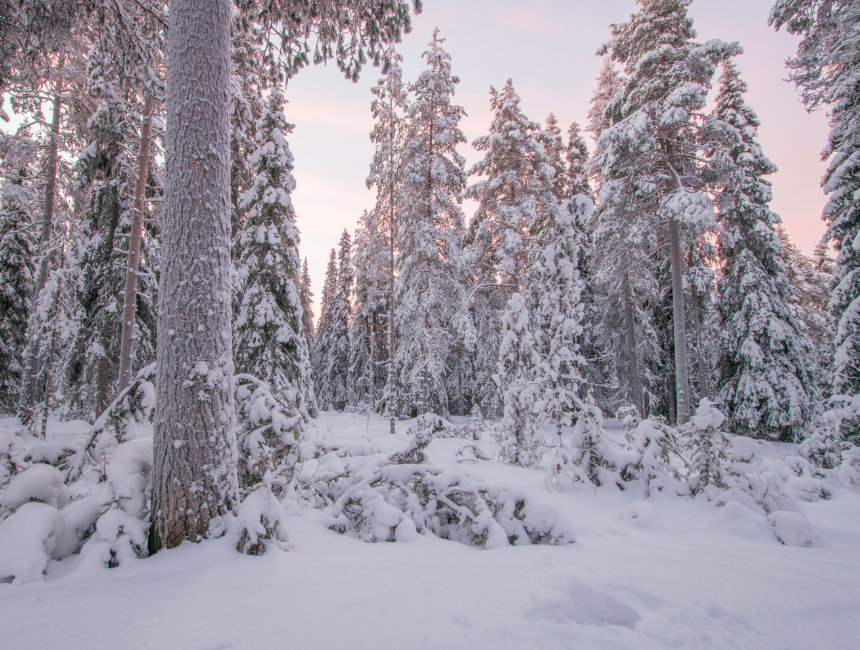 During a trip to Rovaniemi the wintry landscapes are also really worth discovering.

If you’re still looking for an original idea to spend a holiday, you don’t have to look any further than Finnish Lapland. The village of Father Christmas in Lapland doesn’t only offer fun for the little ones, you can also have a blast here as an adult.
Add the countless other activities and the potential presence of the northern lights to the mix, and you can already book your flight to Finland and go meet Santa in Lapland.

Helsinki to Tallinn as a day trip: How to take the ferry and what to do?

11 Things to do in Helsinki

Dining in the Ice Restaurant of Rovaniemi