When planning a visit to the amazing New York City, the sky literally and figuratively the limit. Nowhere else in the world you have so many things to see and so little time. The Rockefeller Center, and to be more precise; the Top of the Rock is one of the sights that you shouldn't miss. Let me tell you why visiting the Top of the Rock is a must.

Buy Top of the Rock tickets and skip the lines! 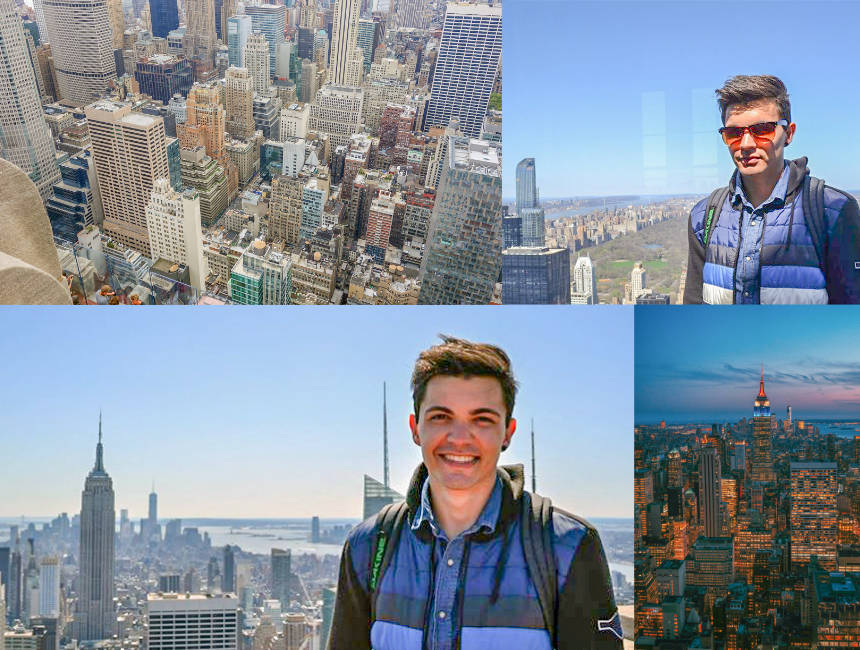 Almost no name is so inextricably linked to the American Dream as that of Rockefeller. His legacy has also manifested itself in the streets and even the skyline of New York City: the imposing Rockefeller Center and more specifically the Top of the Rock is the ideal place to take in the grandeur of NYC.
The first question posed by aspiring travelers to New York is often: “Do I pick the Top of the Rock or Empire State Building”? My answer from my personal experience tells me that during the day you should visit the Top of the Rock and in the evening the Empire State Building. Many tourists do the opposite, making it a lot calmer in both skyscrapers at those specific moments.

A brief history of the Rockefeller Center

How exactly did this impressive mastodon come about? The businessman, billionaire and philanthropist John D. Rockefeller had long dreamed of a “city within a city”. It was his wish that the Rockefeller Center would become the center of art, culture, style and entertainment in the Big Apple.
In 1931, constructions began amidst the Great Depression, which employed more than 40,000 people. Only two years later the first buildings in the skyscraper were opened, although it was only completely finished in 1939.
Nowadays, the Rockefeller Center is one of the most popular attractions in NYC and there is also a lot to do: there is a skating rink, the Tonight Show Starring Jimmy Fallon is found here, there are a lot of shops … but the absolute attraction remains the observation deck: the Top of the Rock. 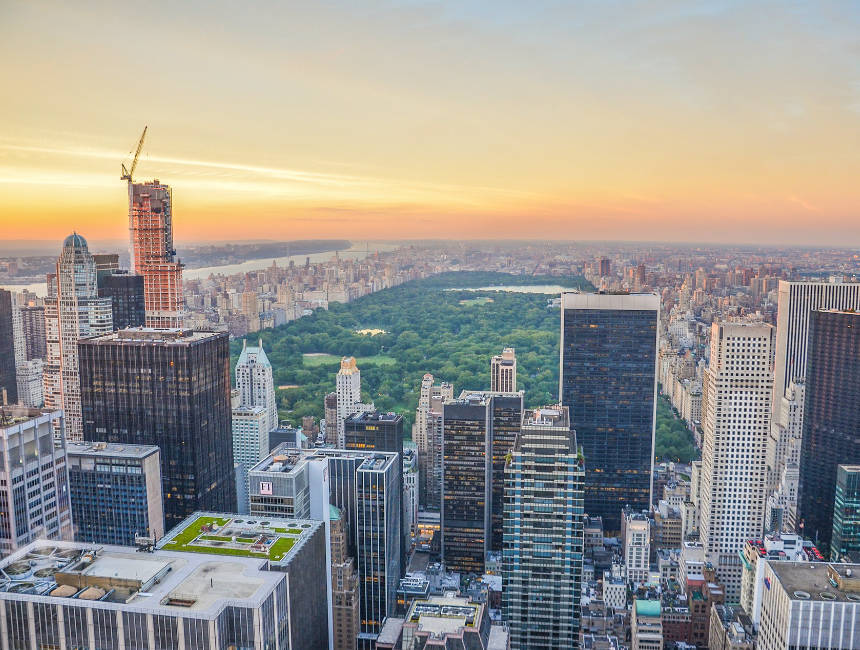 The views from the Top of the Rock are probably the best ones you can have over NYC!

The observation deck of Top of the Rock 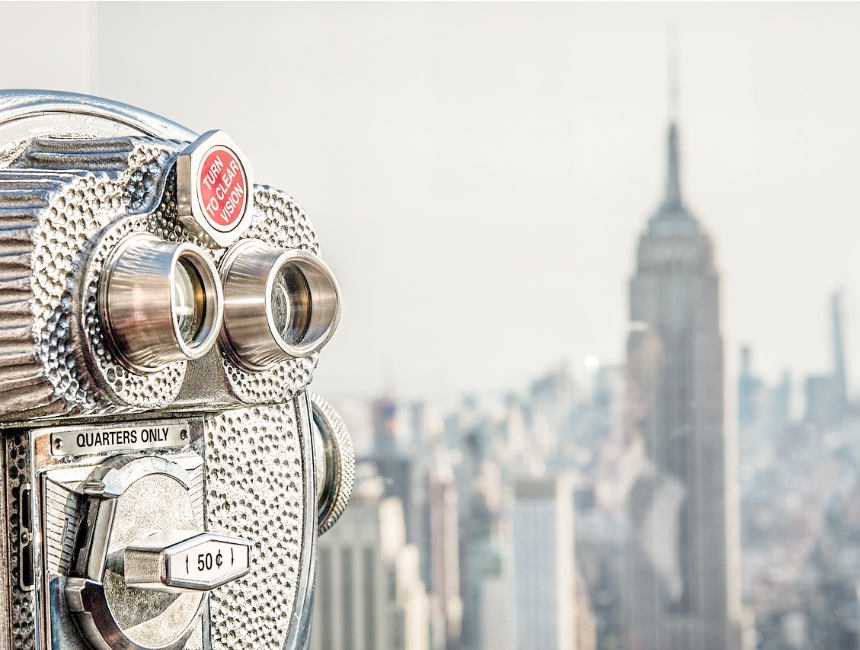 You want an even better view from the Top of the Rock? Toss two quarters in the binoculars and you’ll be amazed by what you can see!

Visiting Top of the Rock

Upon entering the building you’ll be welcomed by a chandelier of Swarovski crystals spanning over three stories high so that you’ll immediately know that there is something in store for you. You first walk through a multimedia exhibition about the history, art and architecture of the Rockefeller Center and then you arrive at the elevators. Although you should never just say elevator to the ones in the Rockefeller Center. They have a glass ceiling and travel at a speed of 366 meters per minute (1200 feet per minute) to the Top of the Rock, where you arrive only 42 seconds later. With the height of the Top of The Rock in mind, this is also an absolute requirement.
In total there can fit sixteen people in every lift and daily there are two to four of them operating non-stop. As a result, 600 people per hour can be brought up by using two lifts, and about 1090 people per hour can be transported with four elevators. Perhaps this is good to bring things in perspective, if you’re getting impatient from the waiting line… 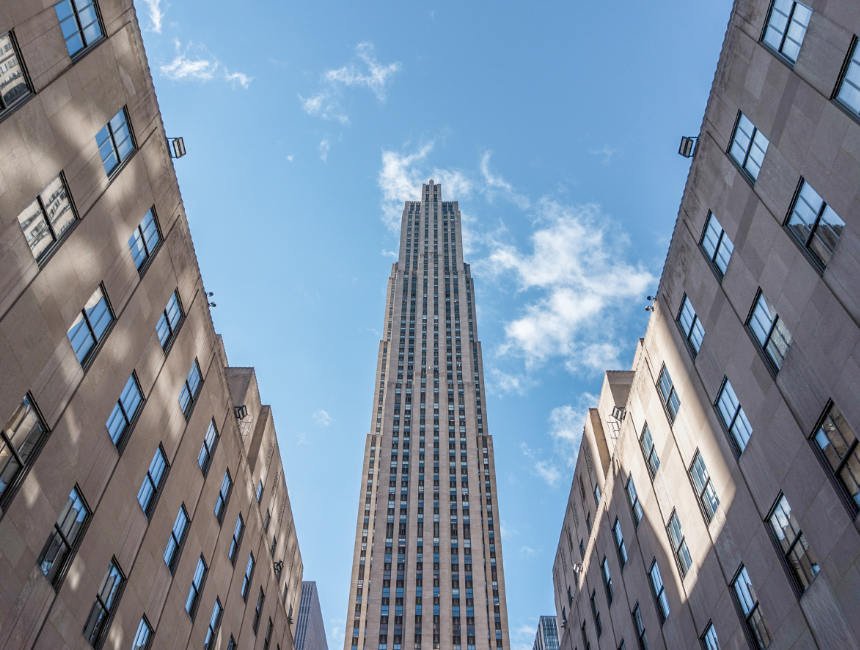 If you’re visiting the Top of the Rock, you’ll first need to get all the way up to the Rockefeller Center. Luckily this is possible with the extremely fast elevators!

Top of the Rock tickets

If you’re planning to visit the Top of the Rock, you should buy your tickets online in advance, so that you can also choose your day and time of visit so that you don’t lose time with queuing. Top of The Rock tickets cost $34 (about €29 or £25) for an adult, $28 (€23 or £21) for kids between six and twelve (under six you can enter for free) and $32 for seniors. For $15 extra per ticket you can also enter again in the evening/night.
A better alternative is perhaps to purchase a New York pass (There are several: the New York City Explorer Pass, the New York Pass and the New York Sightseeing Pass). For about $100 per adult and $80 for children between six and seventeen you get access to the following sights of NYC:

Since you are most likely planning to visit several of these monuments, it would be silly to pay the full price for the Top of the Rock tickets.
You buy these handy cards for New York online, and they’ll save you a lot of money. The nice thing is that you no longer have to choose between the Top of the Rock or the Empire State Building because they are both included.

» All Top of the Rock tickets and excursions

Top of the Rock or the Empire State Building?

Choosing between the Top of the Rock or the Empire State Building is not easy. Both sky scrapers are world famous, and from every viewing platform you get incredibly beautiful vistas.
I can’t make the choice for you, but I can try to make it a little easier.

I think you have a better view on the Top of the Rock. Here you look through glass walls, and if you go a block higher, they aren’t even there anymore. In other words, you get an unobstructed view of the big apple.
From the Top of the Rock you can see: Empire State Building, Chrysler Building, One World Trade Center, Central Park, Bank of America Tower, Flatiron Building, …

At the Empire State Building your view is limited by the bars. For beautiful pictures you have to put your camera through these iron holes all the time and a picture of you with the skyline of NYC is actually a bit ruined because of the fencing…
From the Empire State Building you can see: Rockefeller Plaza Center, Chrysler Building, One World Trade Center, Central Park, Times Square, Statue of Liberty, Brooklyn Bridge, …

Both buildings are in the middle of Manhattan, about a mile away from each other. The Top of The Rock is closest to Central Park and Times Square. The Empire State Building lies to the south and gives better views of the One World Trade Center and the Financial District of New York.

Top of the Rock tickets cost $34 per person, for the Empire State Building you pay $36.

Is it still too difficult to make a choice? Then do both! If you purchase a New York pass, you’ll receive entry tickets for both observation platforms, making all of your visits a lot cheaper. 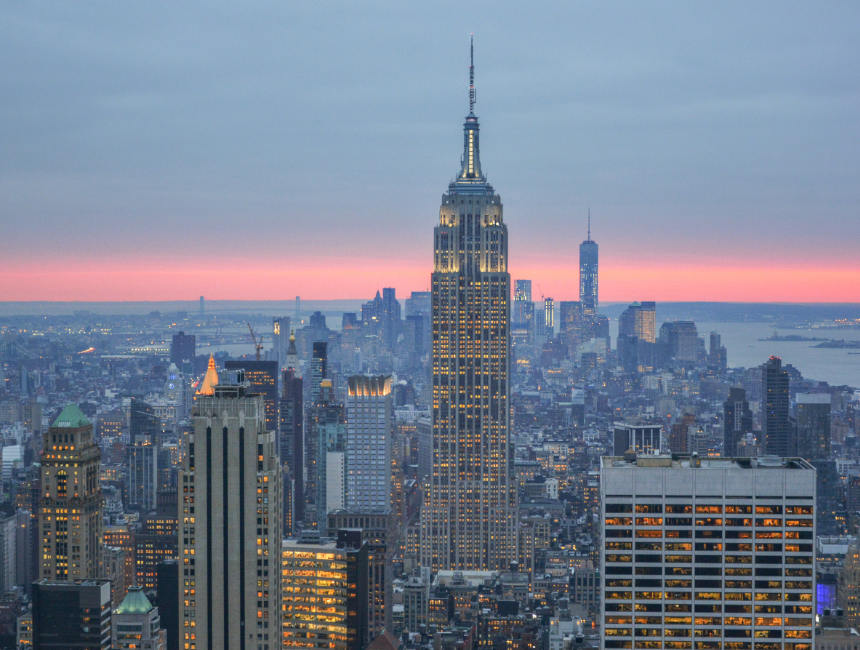 How do you get to the Rockefeller Center?

The RC is located in midtown Manhattan between 48th and 51st street and Fifth and Sixth Avenue. The nearest metro stop is 47-50 Streets Rockefeller Center. Via the website you can calculate the best route for you. Laziness is an American virtue!

Opening hours Top of the Rock

The Rockefeller Center is open 24 hours a day and 365 (or 366) days a year. The observation deck of the Top of the Rock is open from 8 in the morning until midnight, although opening hours may vary on public holidays. It’s best to look at the official website.

A good idea can be to visit the Rockefeller on the first day of your trip so that you get a good idea of the size of NYC. Ending your trip, you then do on the roof of the Empire State Building in the evening because then you’ll hopefully know where to find all of the neighborhoods. Anyway… A visit to the Top of the Rock is always a great idea! 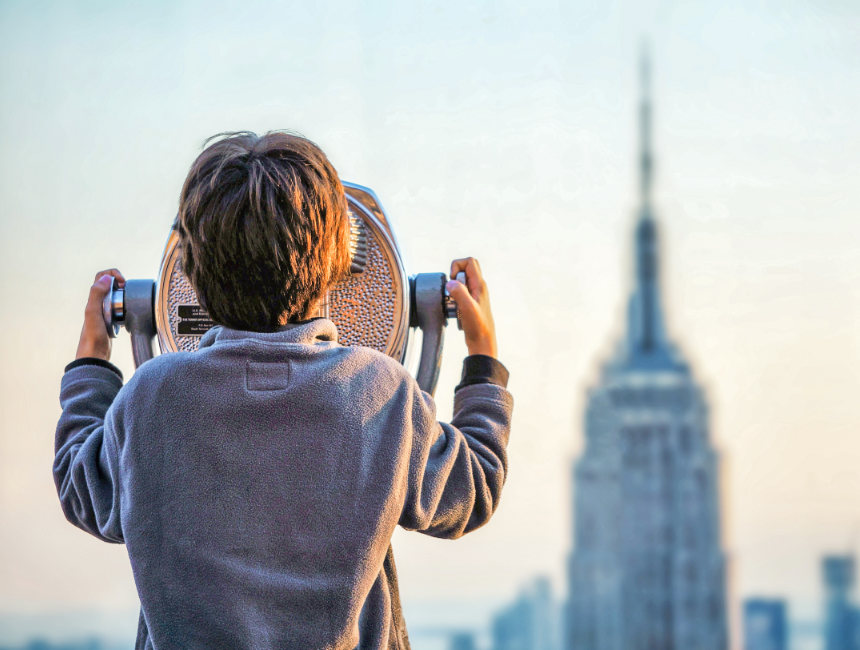 It’s quite expensive to visit the Top of the Rock, but it’s definitely worth its money! You won’t regret it, I promise!