Angkor Wat is a place that is on the bucket list of many avid travelers. This architectural miracle was both adored by musicians and immortalized by Hollywood in several blockbusters. So, what do you do when traveling in South-East Asia? Right! You go to Cambodia to watch the Angkor Wat temple with your own eyes!
This amazing building is the largest religious monument in the world and it should therefore not come as a surprise that people travel to Cambodia just to visit Angkor Wat. Angkor Wat is for the country what the Chinese Wall is for China, and the Taj Mahal for India: a showpiece that you absolutely need to see. 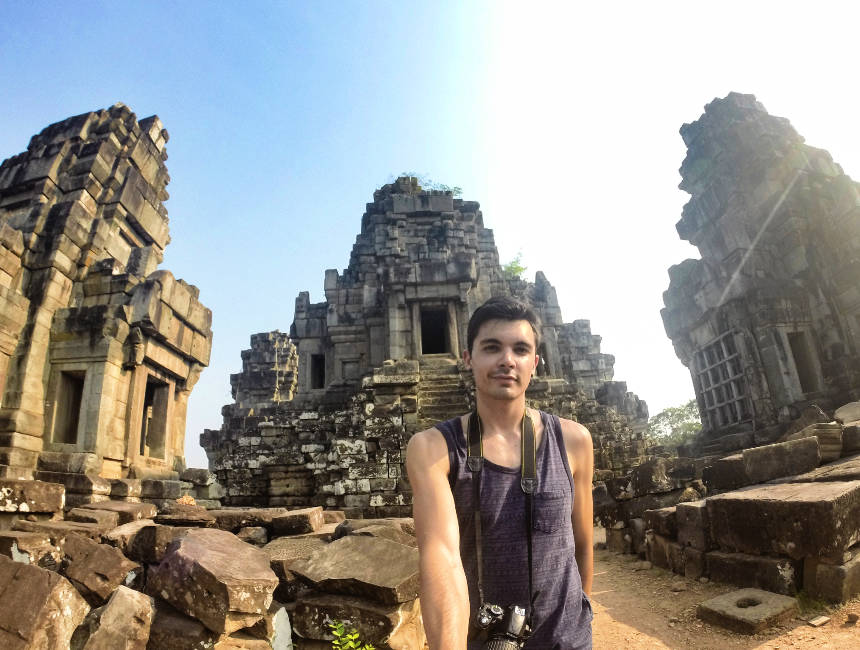 When I was visiting the Angkor Wat temple I couldn’t resist taking a lot of selfies! I recommend you do the same. I love these memories!

The name ‘Angkor Wat’ in Khmer (the official language of Cambodia) means as much as “Temple of the Holy City” and was originally built as a Hindu temple for the god of Vishnu in the twelfth century. At the end of the same century, it changed into a Buddhist temple.
Angkor itself was built by the Khmer king Suryavarnam II in Yasodharapura (contemporary Angkor) as the Khmer Kingdom’s capital. Here he also built a (possible) mausoleum. The temple of Angkor Wat is the best preserved temple of the Khmer architecture complex and therefore also its crown jewel. It has become a symbol of Cambodia and is even shown on the national flag.

The most beautiful temples of Angkor

The entire area of ​​this impressive temple complex amounts to no less than 1,626,000 square meters, containing 72 temples and other buildings. Since 1992 it was added to the list of the UNESCO World Heritage sights.
Let’s take a look at Angkor’s most important sights:

We can of course not start with a temple other than Angkor Wat. The buildings represents ‘Mount Meroe’ and is the home of the gods (such as Olympus was for the Greek gods). Therefore, most of the temples of Angkor (Angkor Wat included) are surrounded by canals, built in a mountainy pyramid form and with exactly five towers (representing the five summits of Mount Meroe). In Angkor Wat alone you can spend hours, so definitely take your time to visit all of the temples! 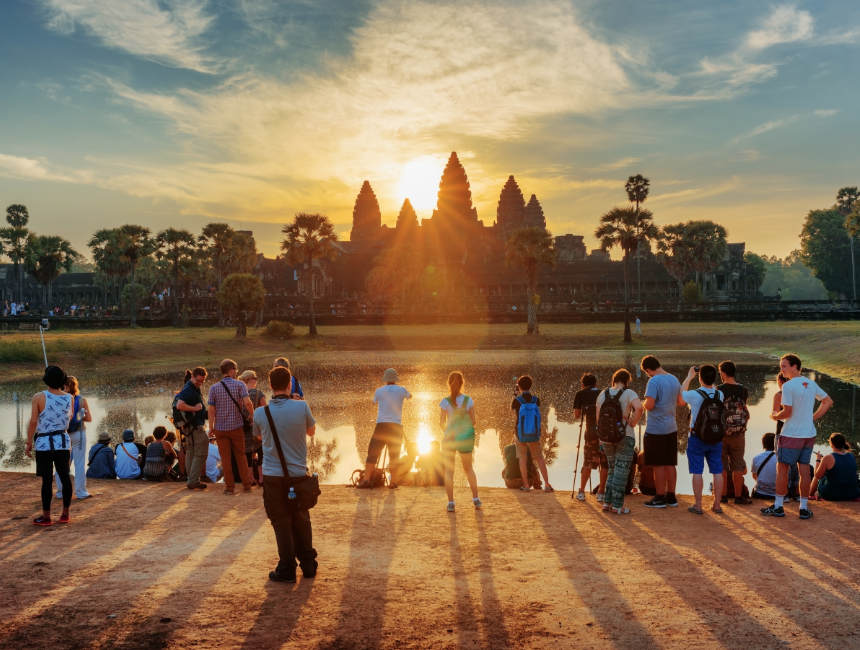 Seeing a sunrise above Angkor Wat is absolutely magical!

This walled city is located just next to Angkor Wat and is almost as famous. The name literally means “Big City” and the area covers an area of ​​nine square kilometers (five and a half square miles). The walls are more than twelve kilometers (seven and a half miles) long and you have five impressive entrance gates. 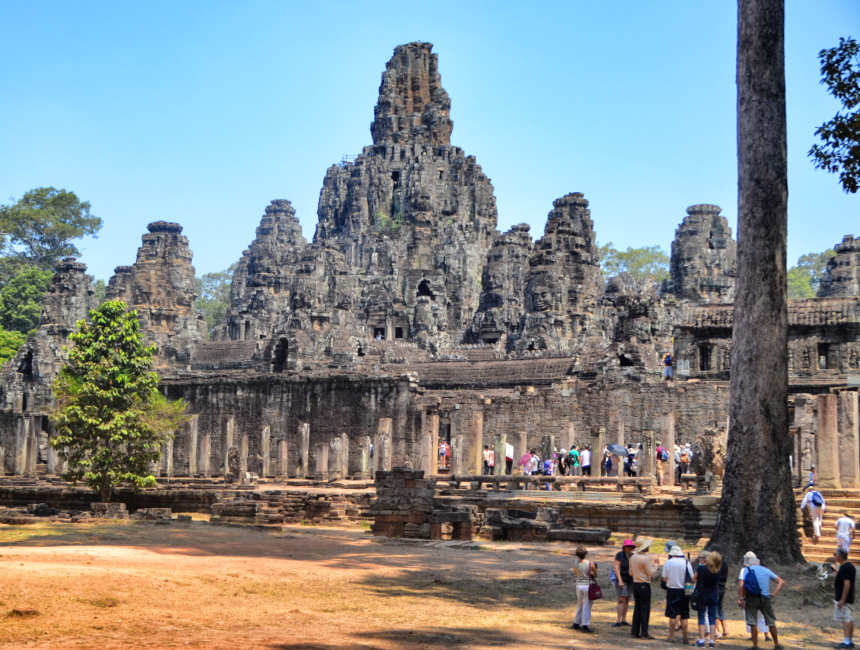 Make sure to leave early if you want to escape the crowds at Angkor Thom!

This breathtaking temple is located in the heart of Angkor Thom. The temple is famous because of the many giant stone faces with which the towers are decorated here. In total there are 54 towers each with four faces, bringing the total to 216 faces. It’s not certain who is pictured here, but it is believed that it is a combination of King Suryavarnam II and Buddha. 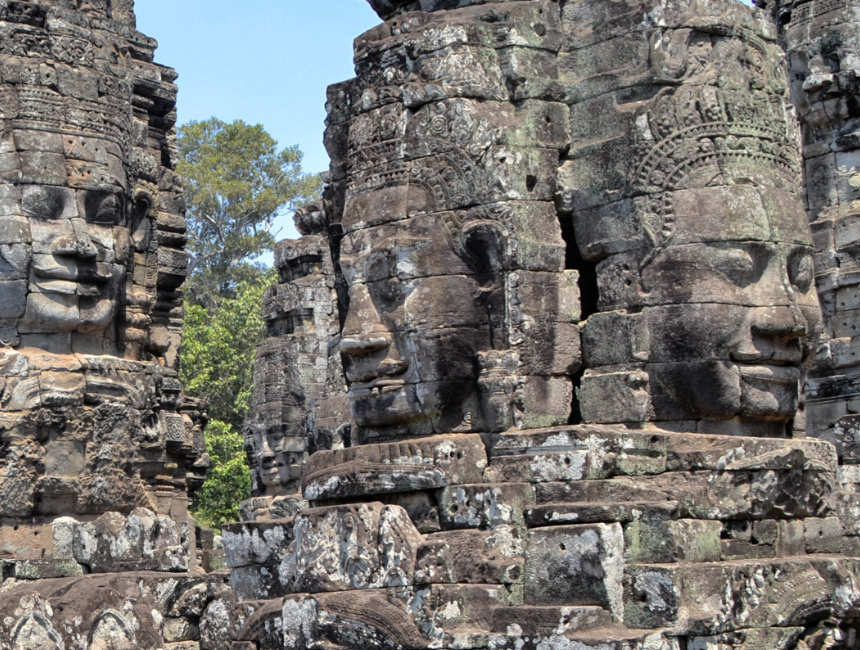 The beautiful sculptures made me dream away!

This temple is also one of Angkor’s most beautiful eye-catchers. Ta Phrom is known because the brickwork is intertwined with trees. It looks as though the jungle is trying to devour the temple. Movie lovers will immediately recognize this location from Angelina Jolie’s Lara Croft: Tomb Raider movie. This gem shouldn’t be missed during your visit to Angkor. 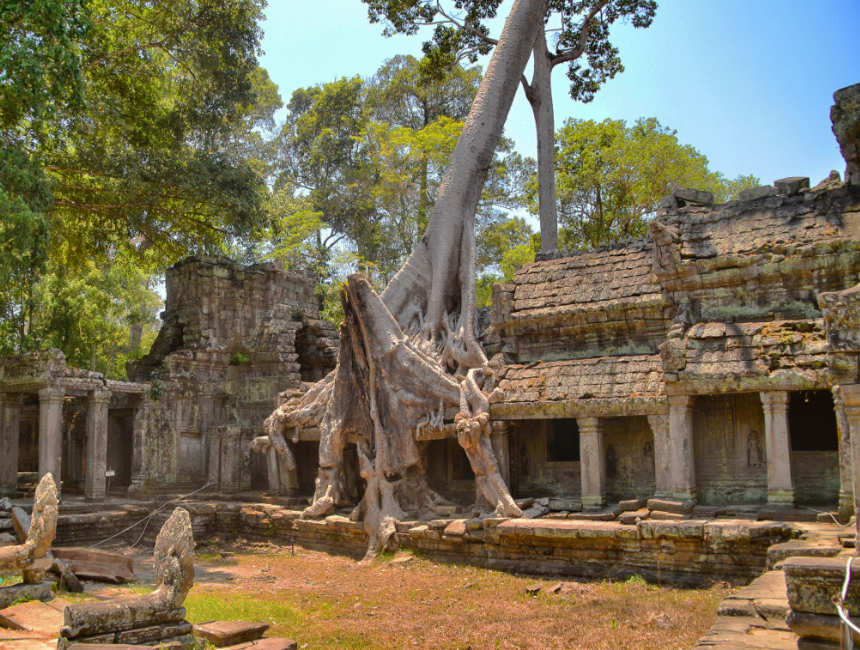 The Ta Prohm temple is overgrown with small bushes and giant trees!

This temple mountain made out of three parts was built as a tribute to the Hindu god Shiva. Later it was transformed into a Buddhist temple. You will also find a 70 meter (230 ft) long (and nine meter high or thirty feet) lying Buddha. This reclining Buddha is longer but less high than the most famous reclining Buddha; Wat Pho in Bangkok.

The Baphuon temple is a lot less known, but definitely worth seeing.

This is the first mountain temple that was built in Angkor and looks like a kind of pyramid. Because it’s on a hill (count half an hour to get to the top) you have a beautiful view of Angkor. This makes it a particularly popular place to enjoy the sunset and unfortunately brings the necessary hassle with it. 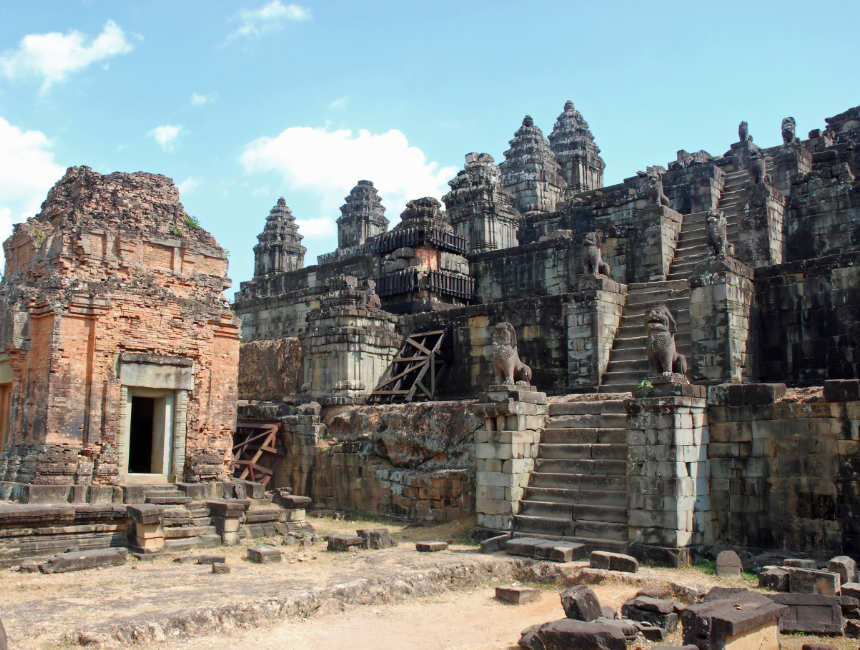 Phnom Bakheng is a Hindu temple and is just as beautiful as the other temples of this gigantic domain.

Here too, the trees grow through the ruins and there are fewer visitors here than at Ta Phrom, which can result in a lot of beautiful pictures. In addition, it’s one of Angkor’s largest temples. 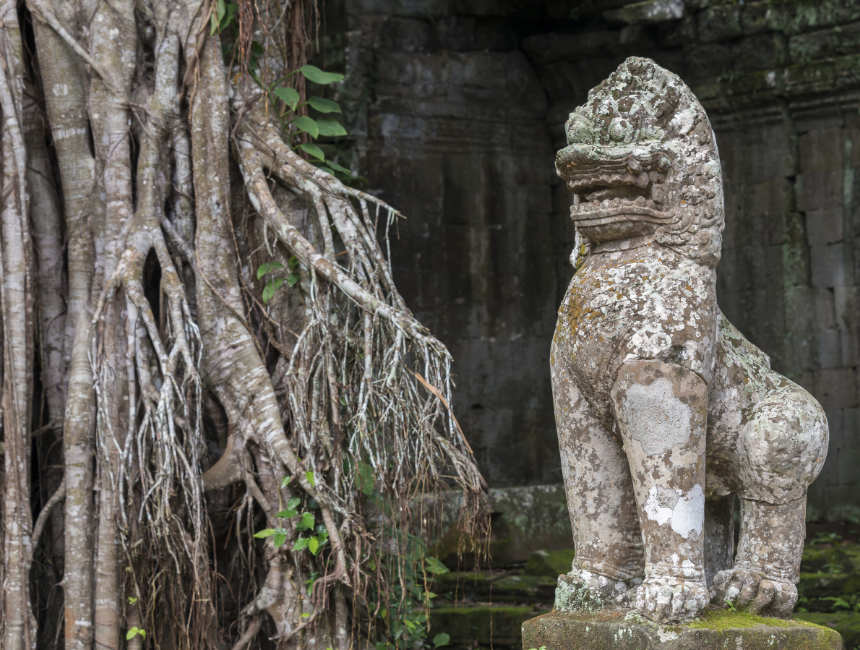 Preah Khan is one of my favorite temples. Nature overtook the entire temple after it was no longer used, and that is just what makes it so beautiful.

Beside the fact that it’s an amazingly beautiful temple, you can also see the sun sink into the Cambodian jungle from here. An excellent alternative for Phnom Bakheng.

In addition to all of these, there are some temples that are a little further away from Angkor Wat, but definitely worth the visit if you have the time. In particular, Banteay Srei is especially beautiful. This red colored temple has beautiful low-reliefs. If you’re impressed with Ta Phrom, don’t miss Beng Mealea. Here the trees are even more intertwined with the ruins. Unlike the temples in Angkor, you can climb up the walls here. 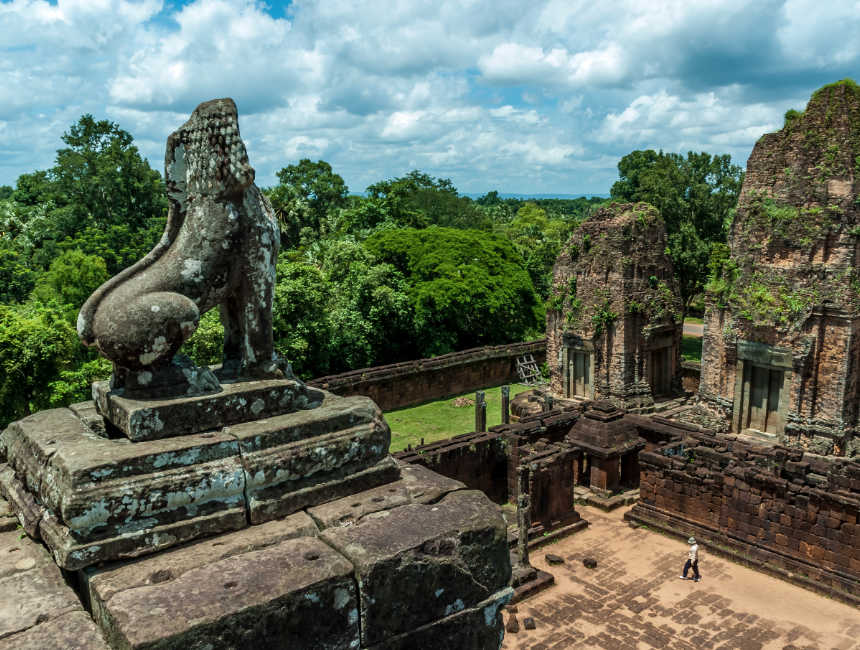 Climb Pre Rup for a nice view of this and many other temples in the area.

How to visit the temples in Angkor?

In the mean time, you have probably already noticed that Angkor is a giant temple complex that you can’t just walk through. If you don’t want to navigate yourself, you can rent a taxi, tuk tuk or motortaxi. The driver brings you to all temples. If you are quite sporty, a bike may be an even better choice. In Siem Reap you can rent a bike for a dollar a day and then it’s about six kilometers until you reach Angkor Wat.
If you want to do extravagant, you can always book a helicopter flight or go ballooning over the temples. What you absolutely shouldn’t do is book a ride on an elephant. In 2017, an elephant died of exhaustion after bringing tourists to Angkor Wat for decades. 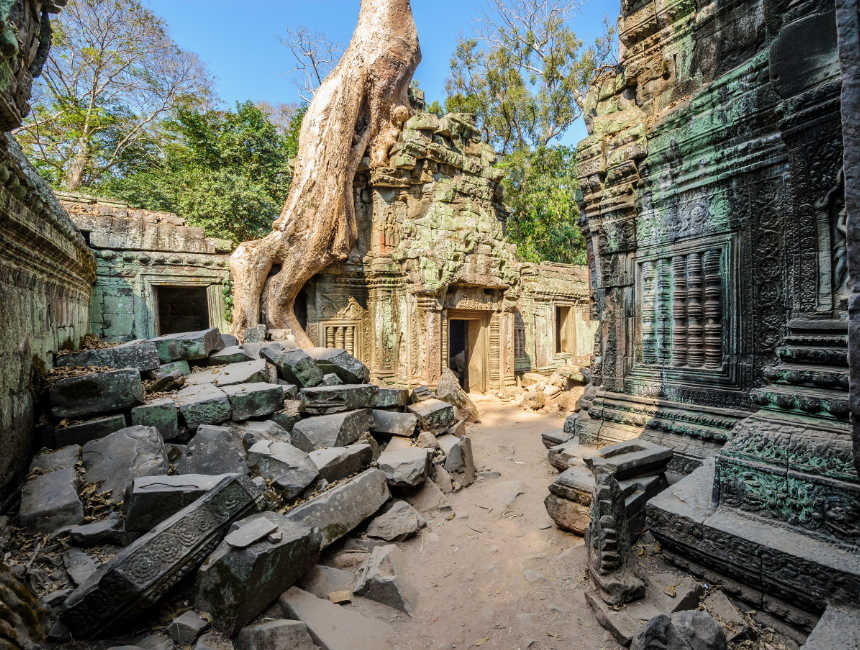 Large parts of the temples have already been reduced to ruins. Don’t climb the temples as indicated that this is not allowed.

Angkor Wat is big business and, unfortunately, it also brings the necessary price increases every year. Let’s compare for a moment: in 1993, almost 7650 visitors came to this wonder, twenty years later, there were no less than two million!
Since this year you pay $37 for a single day ticket, $62 for a three day ticket (it’s valid for ten days) and $72 for a one-week ticket. For a local guide you pay about $20.
Online you can book tours starting from €15 or $16.

You can also always buy a guide book if you wish to explore the Angkor Wat temple on your own. I can highly recommend Ancient Angkor

First of all, always try to come early. You can enter the park already at 5am and the temples are opening at dawn. When you arrive early enough, it’s not yet that hot and there are fewer visitors. The drier, cooler months (November to March) are the busiest months. From June to October it’s a lot calmer but also warmer and wetter. In April, it’s Khmer New Year, which also brings the necessary hassle. 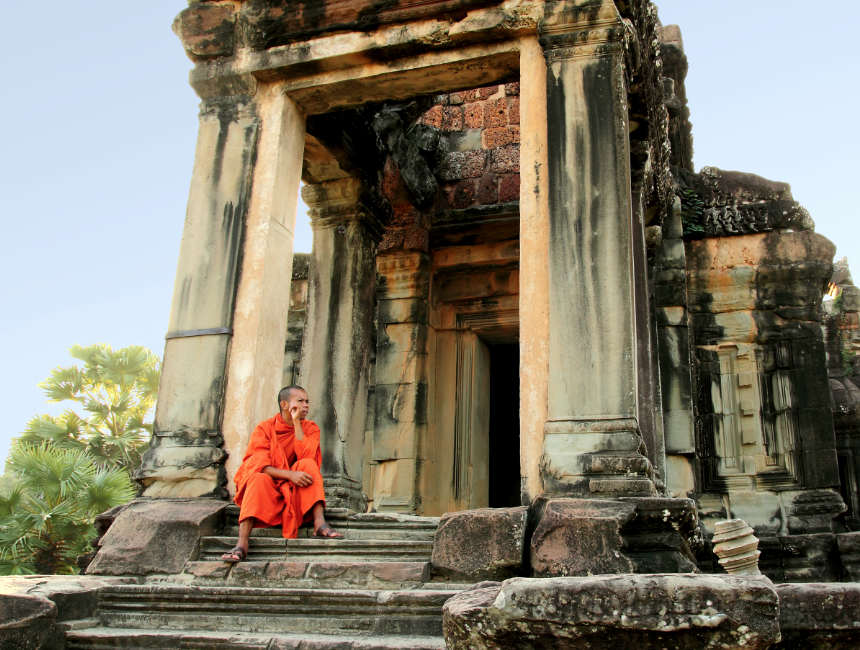 Every day there are some monks who enter the temples of Angkor. Their bright orange garment stands out against the natural colors of Angkor Wat. 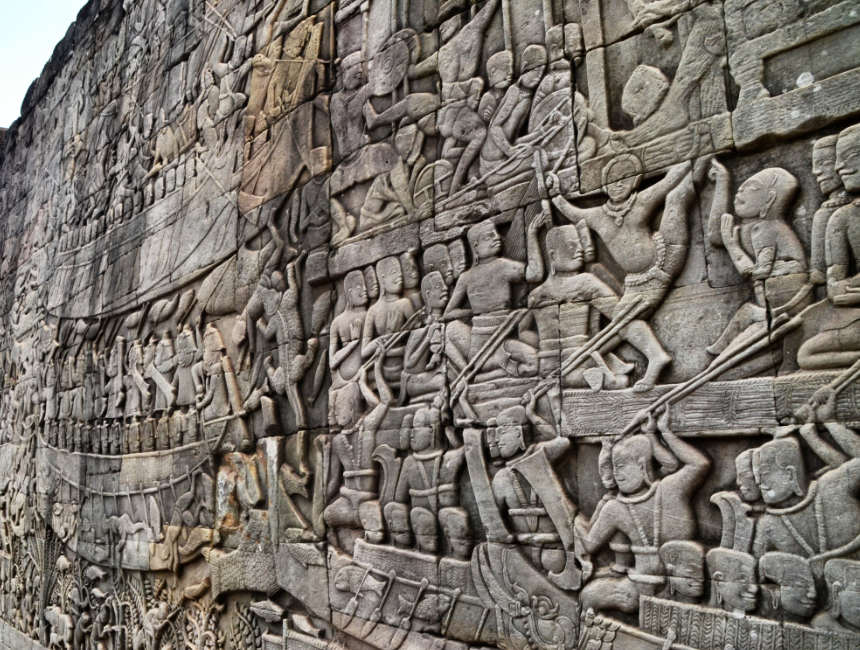 Are you visiting Cambodia soon and would you like to know more about the temples and the its original inhabitants? Then hire a guide! Cambodia is dirt cheap, and for a full day you won’t pay a lot of money. Take a look at these guided tours:

» All tours and excursions in Siem Reap

10 amazing places to visit in Cambodia

Tip: Arrange your tour in advance and avoid queues or sold-out tours. You can order tickets online
with these recognized tour operators.

» All tours to Angkor Wat

» All hotels in Siem Reap.