Sainte-Chapelle is an impressive chapel on the île de la Cité, an island in the middle of the Seine where the famous Notre Dame was built on. This impressive church has been built close to the Palais de Justice (check out the gold decorated gate of this building) and isn't very impressive at first sight. But wait until you enter! The colorful stained glass windows of Sainte Chapelle are, in my opinion, one of the most impressive sights in Paris! 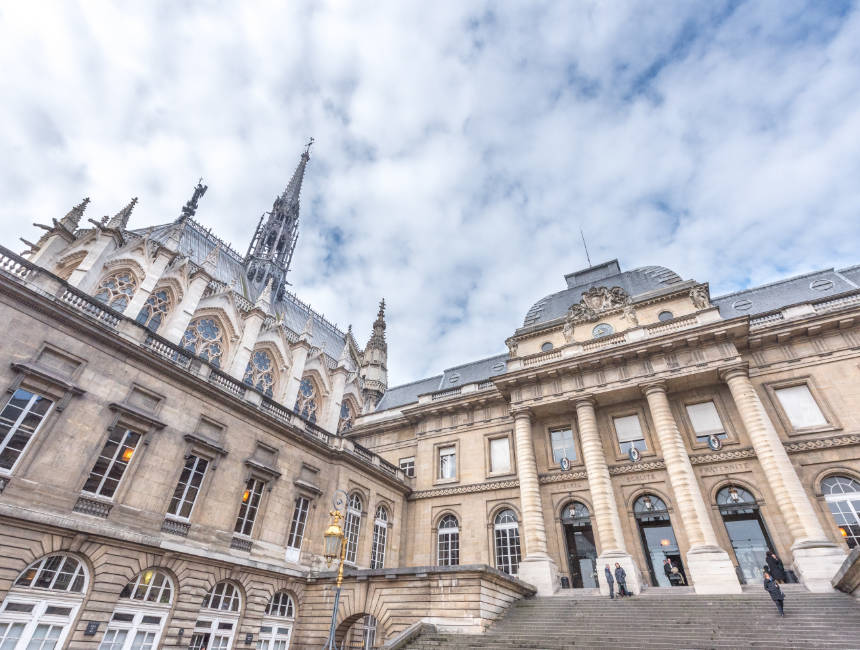 In 1242, Louis IX started the construction of the Sainte-Chapelle. Only six years later (1248) this structure was completed. A few years earlier, Louis IX had purchased some very valuable relics (including the crown of thorns of Jesus Christ), and now he wished to find a suitable place to exhibit these valuable objects.

All this splendor was intended to prove to the rest of Europe that France was a very important and powerful nation. Louis IX even wanted Paris, after Rome, to become the most important city of Christianity.

During the French Revolution, many centuries later, this chapel was seen as a sign of royal and divine power. Hundreds of revolutionaries stormed the chapel and most of the relics and the interior of the chapel was destroyed. As if by miracle, the beautiful stained glass glass remained unharmed! 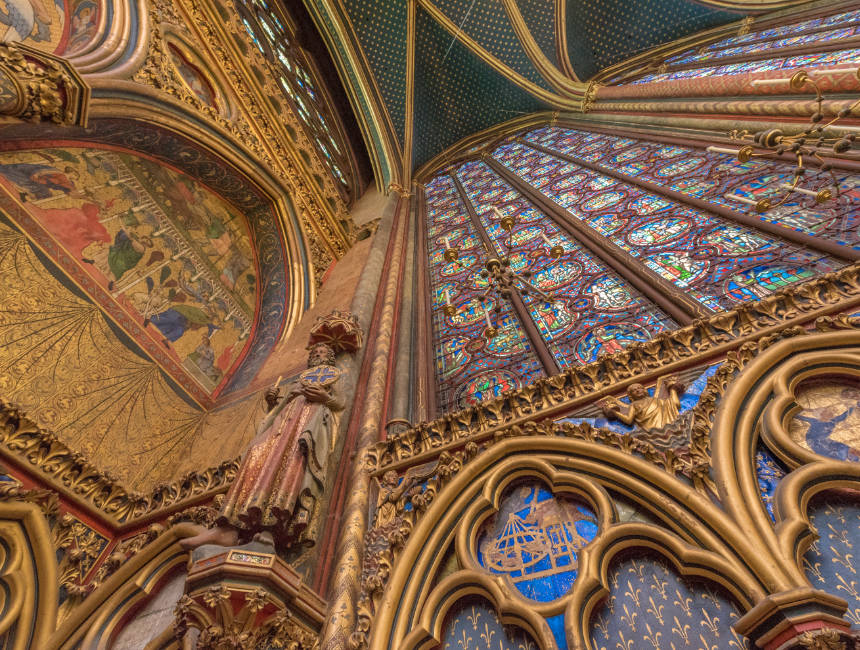 One of the twelve apostle figurines in this beautiful church.

The chapel is rather hidden, and from the outside you don’t actually see it immediately. That’s because this church is actually located in the courtyard of the Palais de Justice (the French courthouse). Amidst gigantic legal buildings lies the beautiful chapel, but at first glance you probably wouldn’t think that it’s really worth a visit.

To get to this courtyard you have to enter through one of the entrances of the courthouse, where you are strictly controlled for weapons and such.
There are indeed decorations on the outside, but they are very sober compared to the inside. The exterior has many typical features of Rayonnant architecture, including the clear distinction between the lower and upper chapel.

What also immediately struck me was that the stained glass windows aren’t visible from the outside. They look almost completely black! 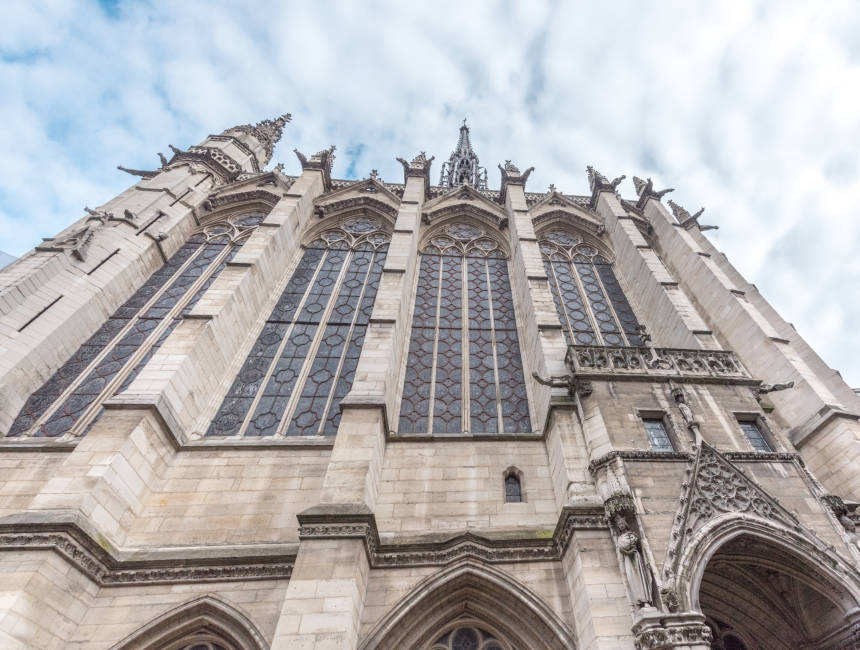 The outside of Sainte-Chapelle looks quite ordinary. Especially when you compare it with the interior!

After you’ve shown your tickets (or purchased them) you end up in the colorful lower chapel of Sainte Chapelle.
Here you can also see some impressive stained glass windows, but here they are rather modest. The beautiful wall and ceiling paintings are beautiful as well! On the vaulted ceiling that beautifully flows into the columns, you see French fleur-de-lis and a beautiful starry sky. On the right side of this lower chapel you can also see some gravestones of clergymen. This floor is completely dedicated to the Virgin Mary. 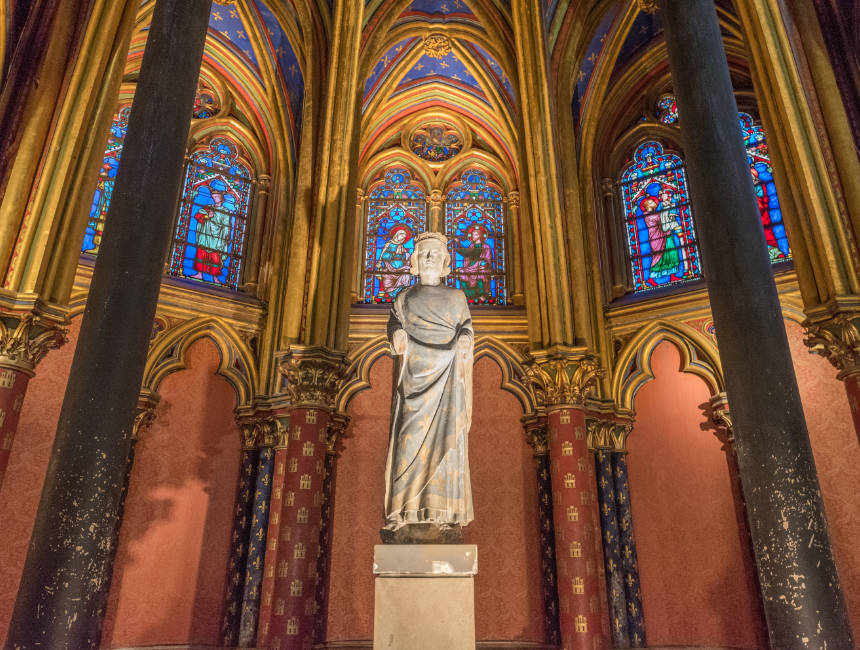 The first floor. Sober compared to the higher chapel, but still breathtakingly beautiful. 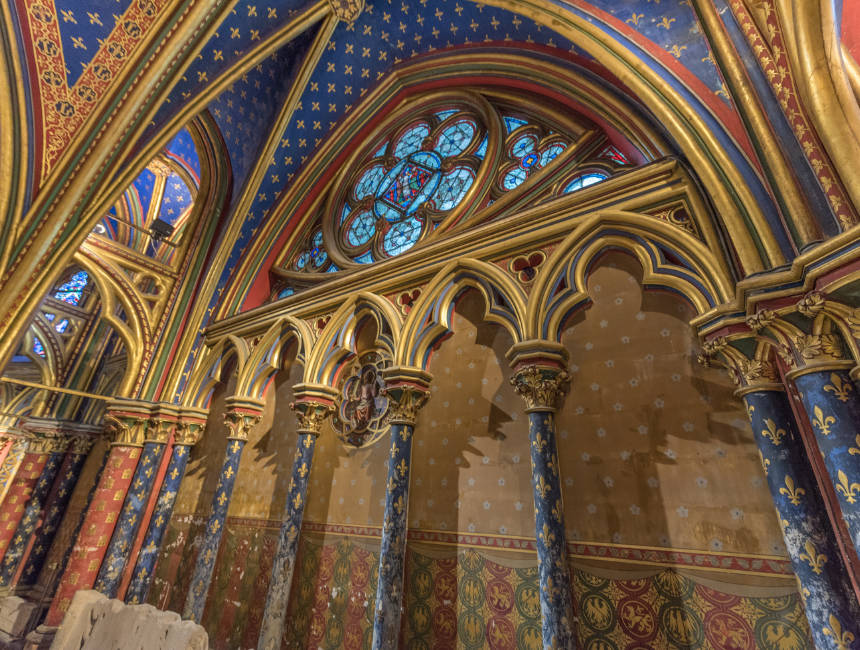 When you visit Sainte-Chapelle, you’ll first see this impressive color palette of the lower chapel.

From the lower chapel you take the spiral staircase to the second floor. Once you arrive, I guarantee you that your jaw will drop open. Fifteen gigantic windows create a light and color spectacle like you’ve never seen before! This masterpiece was only accessible to the king, his family and his friends during the Middle Ages. So you’re quite fortunate that you can look at this masterpiece nowadays!

You can see dozens of biblical stories on these beautiful stained glass windows.
Fragments can be seen from the New Testament and the Old Testament. You can actually read the windows as a story in the direction of the clock. On the last window (on the right) you see a scene where the relics of Jesus Christ are rediscovered, the miracles they did and their relocation to Paris in the hands of King Louis IX (to this chapel).

If you would like some more clarification, I recommend that you consult the pamphlets at the back of the chapel. They tell you everything you need to know about these biblical stories. 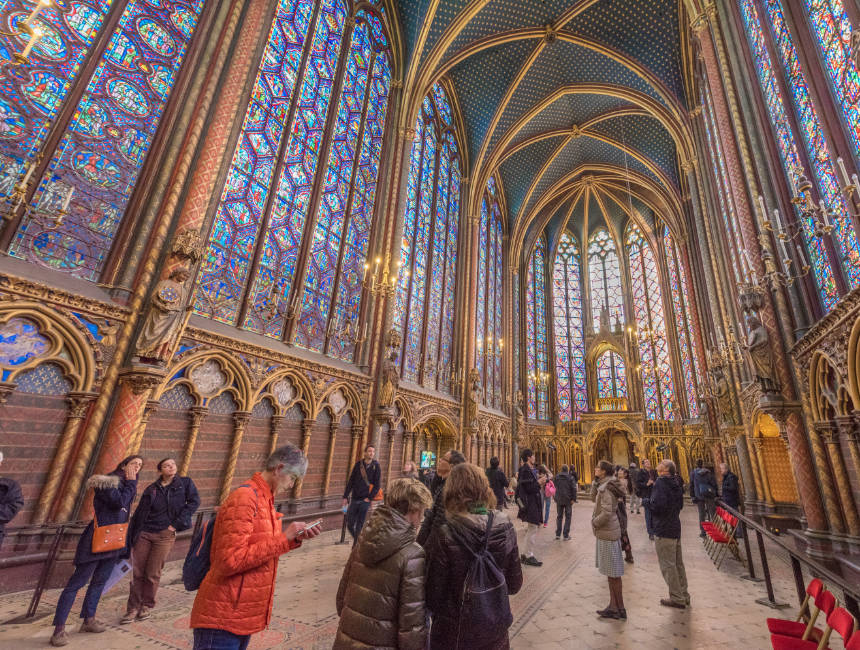 The second floor of Sainte-Chapelle. Divinely beautiful is the least you can say about this place… 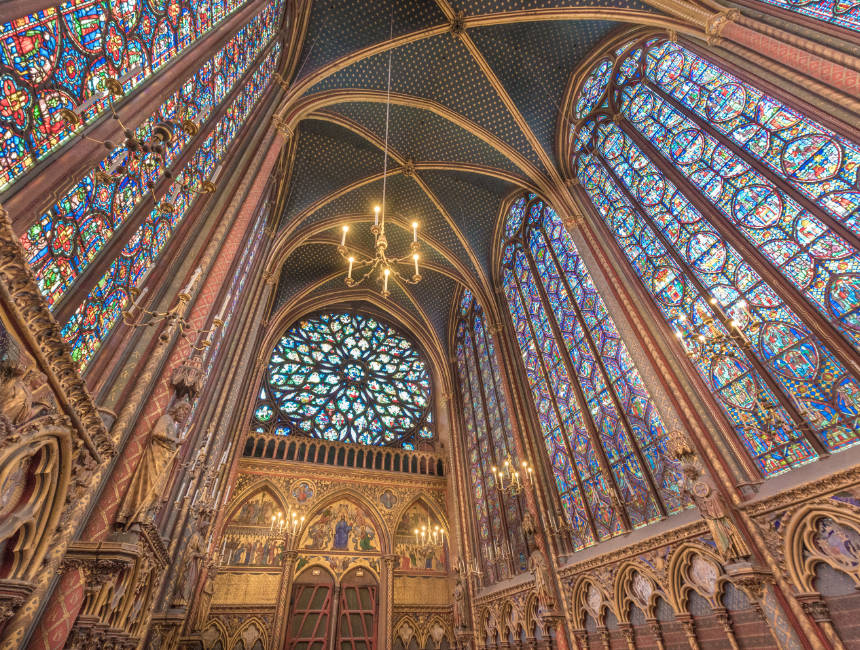 The ‘rose’ at the back of the chapel.

Once you have left the chapel and the courtyard, you can also visit the Concierge or the Conciergerie. These spaces are part of Sainte-Chapelle, but you won’t actually see beautiful stained glass windows here anymore. These vaults and rooms do tell a lot about the French Revolution.

The Conciergerie is the only thing that remains of the once powerful Palais de la Cité. This is the place where all powerful French kings lived and reigned, until Charles V appointed the Louvre as the official residence of the king. As a result, the Concierge was set up as the highest court in France and a (terrible) prison was made out of the other rooms. During the French Revolution, this building was mainly used as a base for the terror of Robespierre. At that time, thousands of people were imprisoned here, including Marie Antoinette. 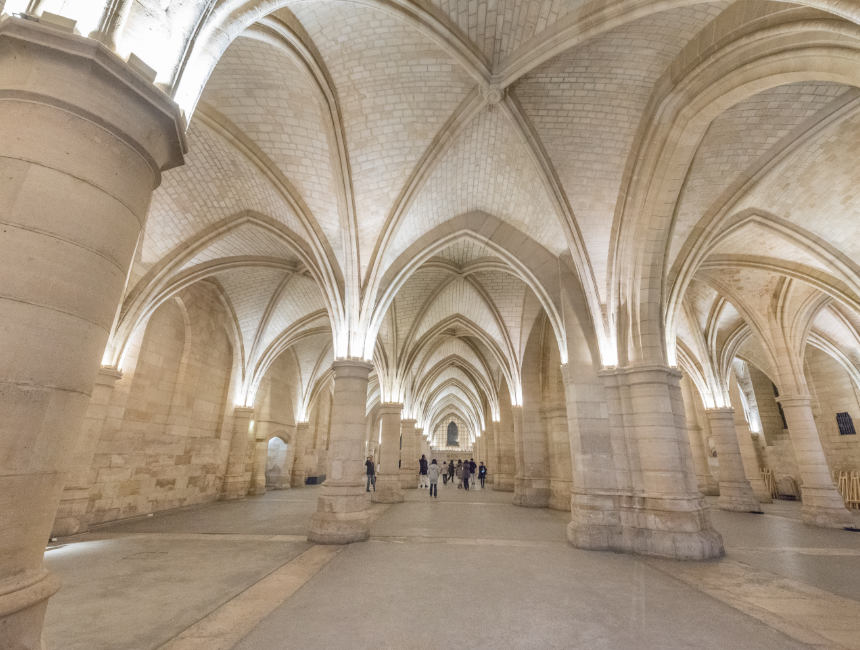 The vaults of the Concierge, a rather impressive prison during the French Revolution. 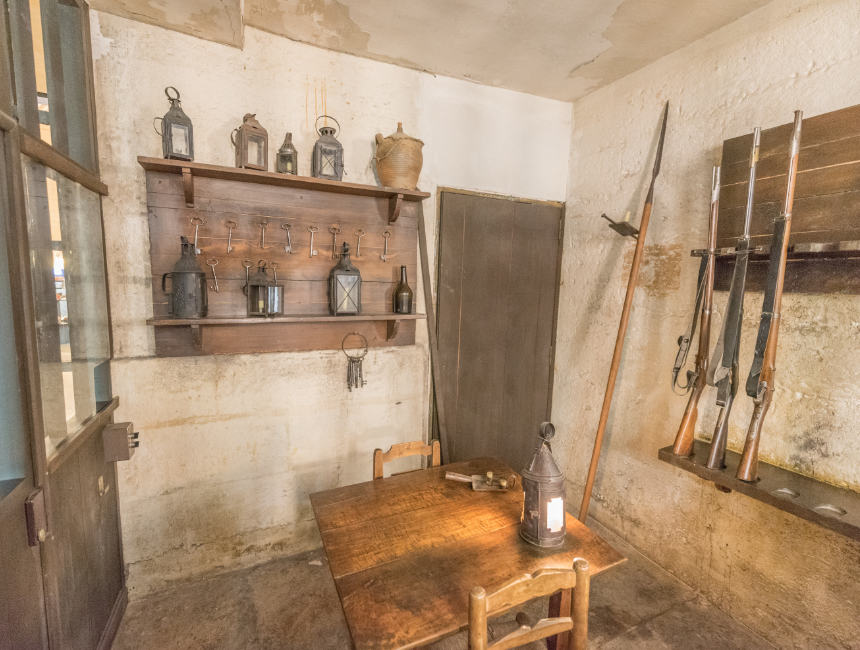 The guards of the Conciergerie must have sat here once, not too long ago.

If there is one church that you have to see in Paris, it is Sainte Chapelle. The beautiful stained glass windows made me dream away!
A ticket for Sainte Chapelle costs €10 per person. If you also want to visit the Concierge, you can buy a combined ticket for €15.

If you plan to visit several places of interest, I recommend buying a Paris Museum pass. For €53 you can visit more than 60 museums, churches and places of interest (including Sainte Chapelle, the Notre-Dame tower, the Louvre, the Musée d’Orsay, the Arc de Triomphe, …) during two days. Do you need more time? Then you can buy a museum pass for 4 or 6 days as well.

You can also visit Sainte Chapelle for free!

Anyone with a European identity card who is -26 years old can enter the chapel free of charge, and from Monday to Friday there is free admission between 1:00 pm and 2:15 pm. However, long queues are to be expected.

Sainte Chapelle is open daily with the exception of 1 January, 1 May and 25 December. 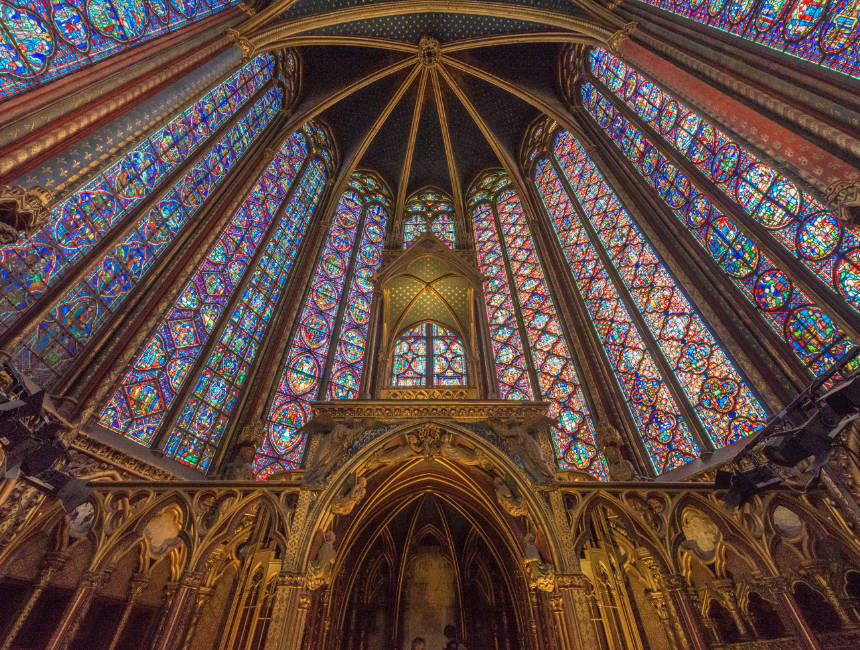 Tickets for this chapel are more than worth their money! I hardly ever saw anything more beautiful than the stained glass windows of Sainte-Chapelle!

A visit to Disneyland Paris: what to expect? Cheap tickets + more info

This was the Notre Dame before the fire…

Winter sports in Valmeinier: the perfect ski area in France for families