Technically speaking, the St. Peter's Basilica is located in the Vatican City, yet this gorgeous building is counted among the most beautiful of sights of Rome. You can't miss it during a visit to the Eternal City. In this article you'll find more information on how to visit St Peter's Basilica (without standing in line) and some fun facts about this famous building. 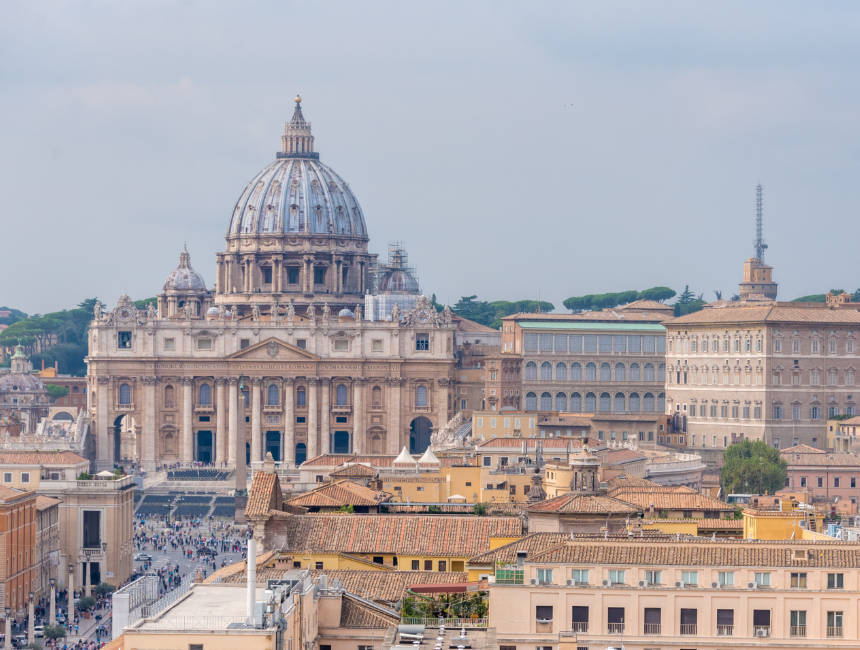 The most important and biggest church of Christianity

La Basilica Papale di San Pietro in Vaticano is a mouthful, but it suddenly perfectly covers the importance of this church. Not only is this the most famous work of renaissance architecture, it’s also the biggest Christian church in the world! This religious building is what Mecca is for Muslims and is often described as “the most important of all churches of Christianity”, although that should actually be the Archbishopric of St John Lateran.
It’s not surprising that tens of thousands of believers gather here every year to listen to one of the Pope’s liturgies. They do this either inside the basilica or on the breathtaking Saint-Peter’s square.

In 1506 they started construction and it would last until 1626 until this whopper was finally finished. Originally there was a basilica on this location which Constantine I had built in the fourth century, but because of its bad conditions, it was demolished. No less than five different architects worked on the design, of which Michelangelo is the best known. Obviously the construction cost a lot of money, which was obtained by selling indulgences to the people (a paper with which sins were waived so that one could go to heaven instead of hell). On November 18, 1626, after 120 years of building, St. Peter’s Basilica was finally completed. The basilica was named after the apostle Peter, who was one of the founders of Christianity. You can even admire his remains in a tomb. 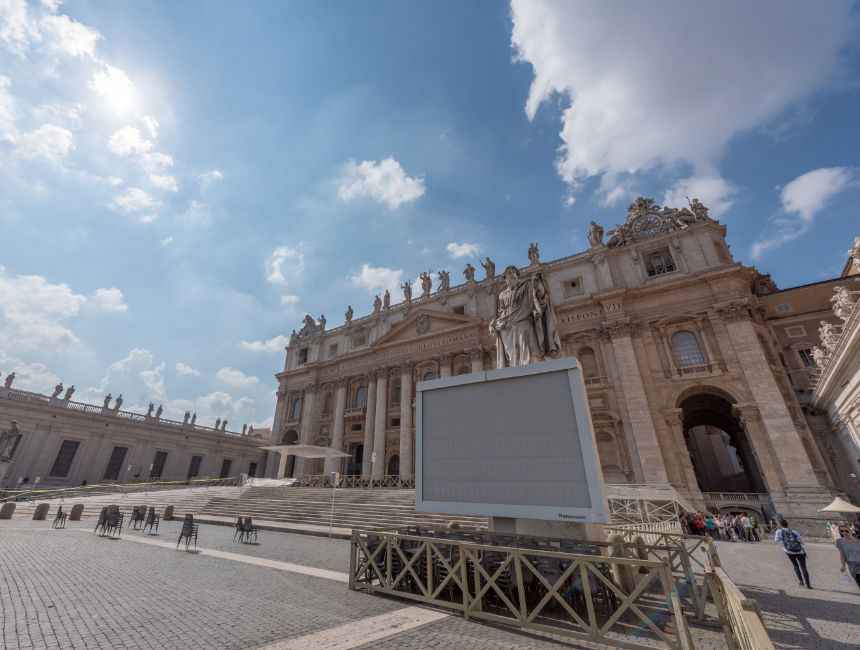 The St Peter’s square, where you can see the pope on regular times.

What can you see in the St. Peter’s Basilica?

When you arrive at the St. Peter’s square, you’ll certainly need some time to take in everything for a moment. Even if you’re not a fan of churches, this magnificent design will not leave you unmoved. You’ll immediately notice the gigantic dome of the St. Peter’s Basilica (with a diameter of 42 meters or 138 feet), which dominates the skyline of Rome. After that you’ll really start to notice how incredibly big this building is. To give you an idea: the height is 136.6 meters (448 ft), the width is 150 meters (492 ft) and the length is 220 meters (722 ft). Quite different from your local parish church, I immagine. Of course there is a lot to see, but to make it a little easier for you I’ve made a list of four things that you shouldn’t skip when you’re visiting St Peter’s Basilica.

The baldachin of Bernini

The name Bernini might ring a bell thanks to the book “The Bernini Mystery” by Dan Brown. Bernini helped design the St. Peter’s Basilica, but also the famous baldachin inside the church. This sort of canopy is used for the preparation of the Sacrament before the Eucharist is celebrated. 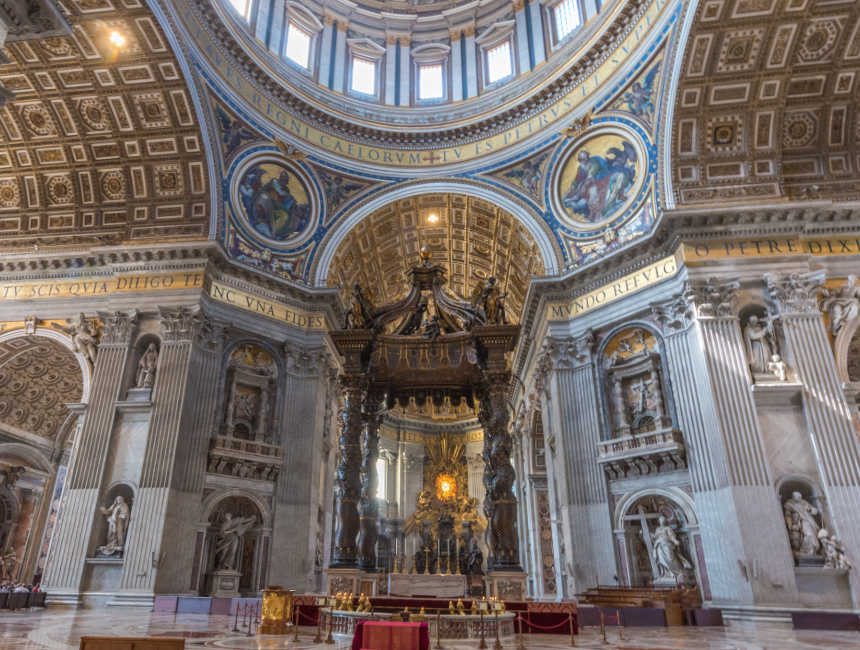 The baldachin of Bernini. A gigantic lectern that makes you gasp for breath!

There are no less than 395 statues in the basilica. Of course I will not list them all here and I won’t try to bore you with a whole bunch of names, but if there’s one sculpture that you should see, then it is the Pietà by Michelangelo. A beautiful picture of the Madonna with child.

The body of Pope John XXIII

In addition to many monumental works of art, you’ll also find a somewhat stranger landmark! In a beautifully decorated glass coffin you can admire the body of Pope John XXIII. 38 years after his death, this pope was taken out of his tomb and exhibited in St. Peter’s Basilica. A phenomenon that only two popes did before him . Some think it’s a miracle that he’s been so well preserved, but nothing is less true. When Pope John died, he was injected with a special liquid that stores bodies incredibly well. 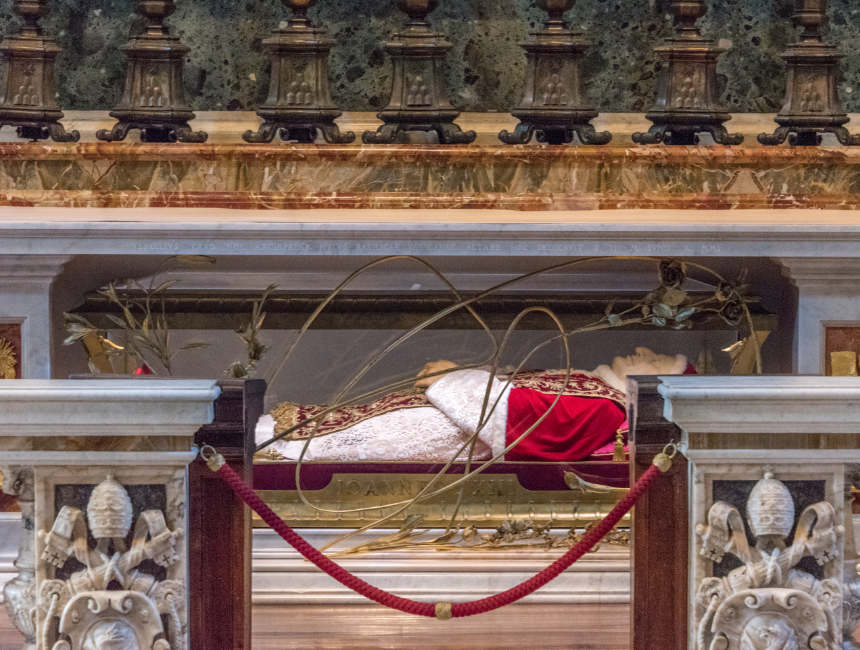 The body of Pope John XXIII is not very noticeable when you’re visiting St. Peter’s Basilica. So make sure to look out for it!

There are more than 100 tombs in the St. Peter’s Basilica, of which 91 belong to former popes. If you want to see the relics of Saint Peter, you must be in the crypt. Only since 1979 (thanks to Pope John Paul II) you can actually visit this location. It’s therefore a place where many pilgrims come together. It’s forbidden to take photos here, out of respect.

The dome of St Peter’s Basilica is one of the absolute eye-catchers of the building and you can even climb it! This gorgeous cupola lies right above the tomb of Peter and is carried by four gigantic columns. At the foot of this are statues of Saint Veronica, Saint Andrew, Saint Longinus and Saint Helena. Make sure to climb the roof of the basilica (551 steps!) And enjoy a well-deserved and spectacular panoramic view of Rome. From here you can also see the Castel Sant’Angelo and the Vatican Gardens. 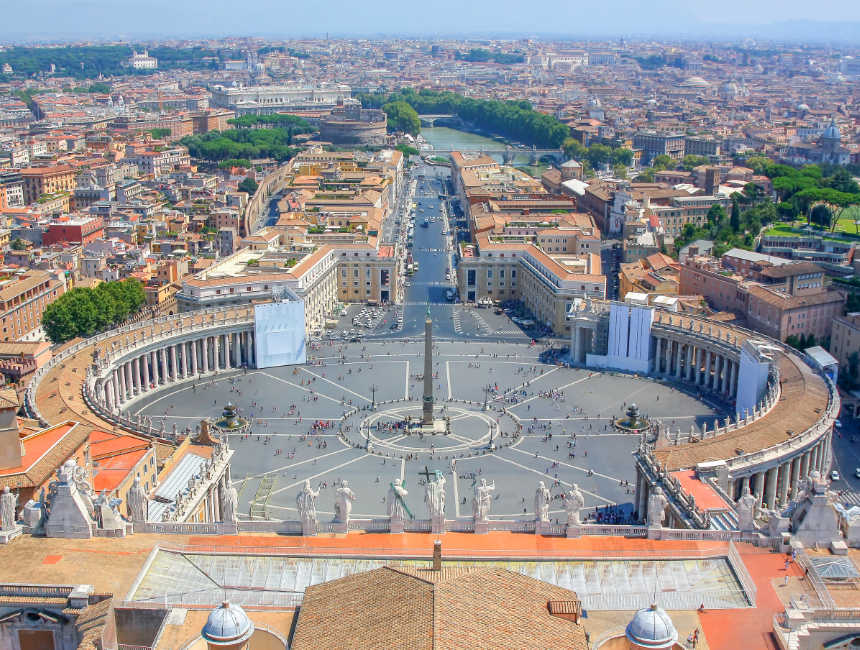 You have to do some effort, but the view from the dome in St. Peter’s Basilica is breathtakingly beautiful!

What does visiting the St. Peter’s Basilica cost?

A visit to St. Peter’s Basilica doesn’t cost you anything… Well, it does cost a lot of time. You can enter for free, but for some things you have to pay, including access to the dome. Here are the two options:

You probably don’t want to be in the queue for hours (and no, that’s not exaggerated…), so I give you the advice to book a priority ticket for €19.50. If you also want a guide to accompany you, you pay €27.

The dome of St Peter’s Basilica has different opening hours: 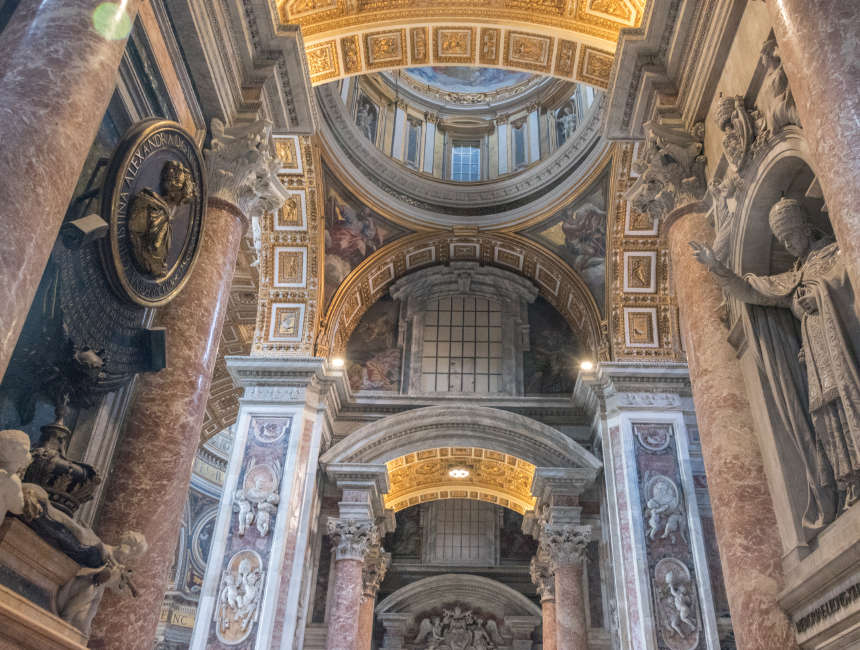 The whole church is lavishly decorated with marble statues and pillars, gold foil and beautiful paintings. 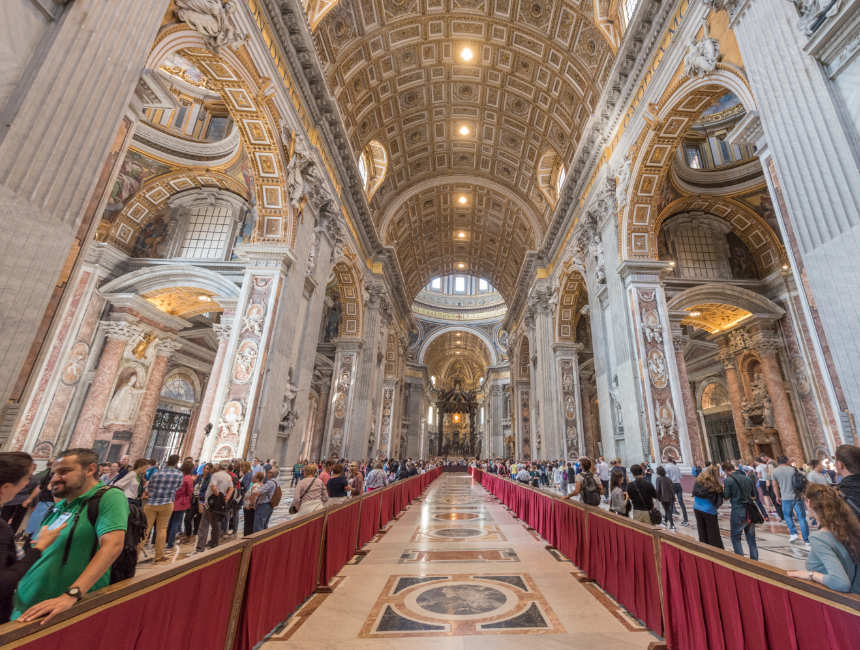 Prepare yourself for a huge crowd of people! It’s one of the most beautiful sights of Italy!

Even if you’re not religious, you shouldn’t miss visiting St. Peter’s Basilica during your visit to Rome. Together with the Coliseum, this is perhaps the most impressive building of the Italian capital.

Try to visit St. Peter’s Basilica with a guide. So you get to hear nice stories and juicy gossip! Highly recommended.

When I saw the queues in front of St. Peter’s Basilica, I got completely discouraged. I heard that the queues could sometimes take up to three hours, and that is definitely not an exaggeration… Normally, access to St. Peter’s Basilica is free, but for a small fee you can also buy skip-the-line tickets. Luckily! Because standing in a queue for three hours isn’t really why I came to Rome for…

Another way to stop for a long time is to combine your visit to the Basilica with the Vatican museums. Book your tickets online and combine them with a guided tour in St. Peter’s Basilica. This way you can bypass the queues twice! Once for the museums and once for the basilica.

These are some options:

» All tours and tickets

Tip: Arrange your tour in advance and avoid queues or sold-out tours. Online tickets can be ordered from these recognized tour operators.

» All tours in the Vatican

» All hotels in Rome.

» All hotels near the Vatican.