What the Louvre means to Paris is the Uffizi for Florence. Together with the Vatican Museums, these are the two most visited Italian museums, and that obviously says something. Masterpieces of the best artists this world has ever known such as Botticelli, Michelangelo, Leonardo da Vinci and Raffaello can be admired in all their originality and splendor in the wonderful Uffizi gallery of Florence.

Book your tickets online to skip the long lines!

In the heart of Florence you can find the Galleria degli Uffizi, which already was open to public on request in the sixteenth century. Only in 1765 it was officially opened to a broader spectrum of citizens and another hundred years later it became an actual museum.
What began with a collection of artwork given by the influential Medici family to the city of Florence, has eventually become a world-class museum.

Last year, two million visitors visited this jewel, so the waiting times in the high season can sometimes take five hours or more… Fortunately, you can skip queueing by buying online tickets for the Uffizi gallery in Florence. You’ll need all the time you can get to inspect these beautiful works of art! 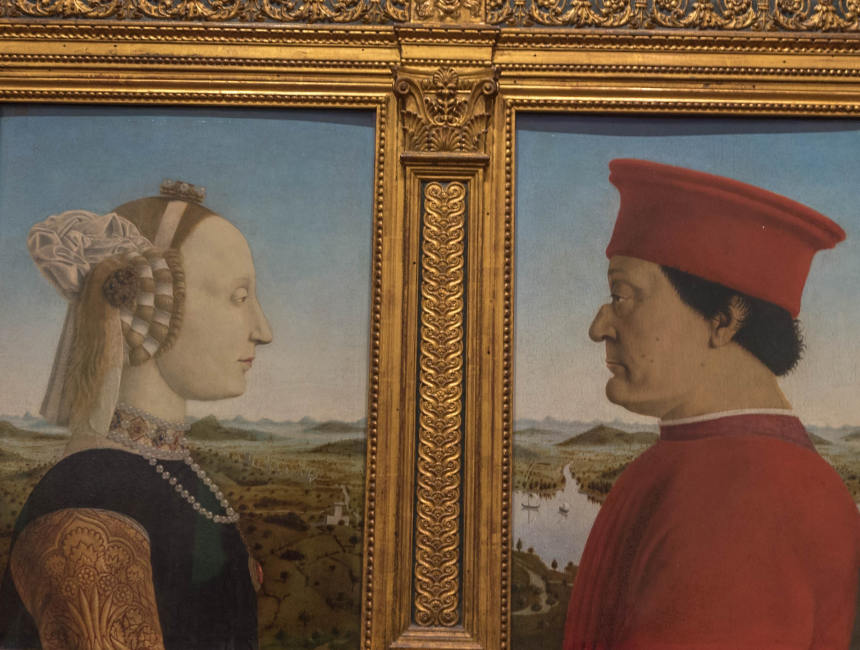 A lot of people come to Florence just to visit the Uffizi gallery. And why not? There’s plenty to see!

Short history of the Uffizi

As you could previously read, it wasn’t the original intention that the Uffizi gallery would become a world-famous museum.
The building that houses the Uffizi was first used for other purposes. Cosimo I De’ Medici commissioned his favorite artist Giorgio Vasari to design a building that could accommodate the administrative and judicial offices (thus called the “Uffizi” – Office) of the Medici. Vasari also designed a secret corridor connecting the Uffizi with the Ponte Vecchio!

When you visit the Uffizi, you’ll see that there are 45 rooms spread out over two floors. In order to avoid seeing everything but in fact not seeing anything, I will try to at least tell you about which halls or artworks that you definitely shouldn’t miss.

Hall 2: Giotto and the thirteenth century

At the end of the thirteenth century, a revolution took place in Italian paintings and you can’t miss this room to fully understand it.
Most of the paintings that hang here are characteristic of Byzantine art that dominated until then: two-dimensional bodies with sharp contours.

When you look at Cimabue’s oeuvre, you notice that something is slightly changing. In one of his last works (before, he was also influenced by the Byzantine school) you already see traces of experimentation with space. His pupil Giotto would experiment even more and thus lay the foundation of modern painting. Giotto created perspective especially by using human figures. 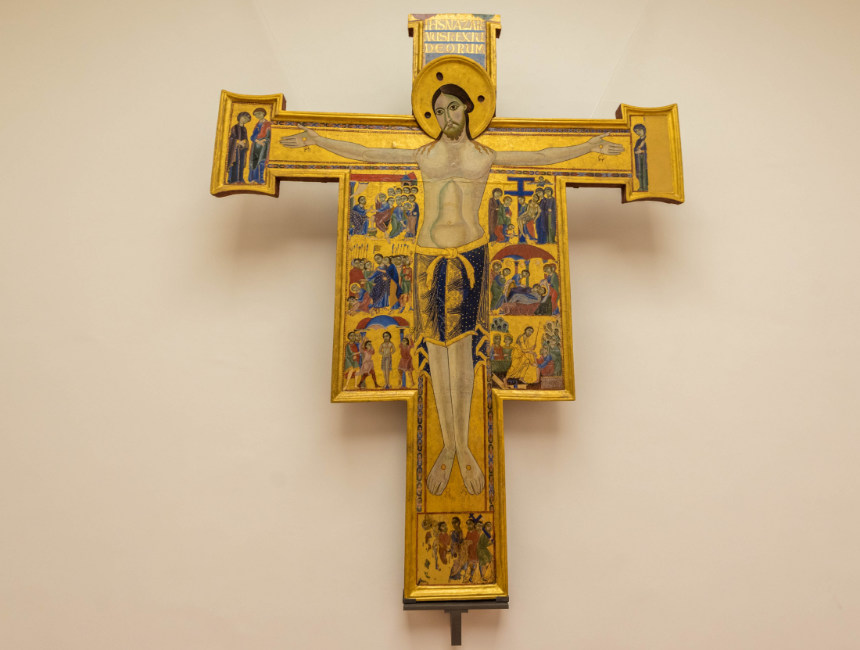 In these rooms you’ll see a lot of beautiful crucifixes in the typical painting style of the thirteenth century.

This is perhaps the most famous hall of the Uffizi museum: this where the works of Alessandro Filipepi are exhibited. This name probably doesn’t sound familiar because we all know him by his artist name: Sandro Botticelli. Two of his masterpieces summarize the essence of the Renaissance: ‘The Birth of Venus’ and ‘Spring’.

The first is also one of the most iconic paintings in the world and was inspired by the Ovidius Metamorphosis. Venus is sitting naked on a shell while the wind gently blows her hair with a rain of roses. To her right, her maid Ora is pictured besides her and a little shy she’s helping her get dressed. In the meadow we see a lot of violets, a symbol of modesty but at the same time often used in love potions. One can spend almost one day at the Uffizi gallery in Florence just to admire this masterpiece. 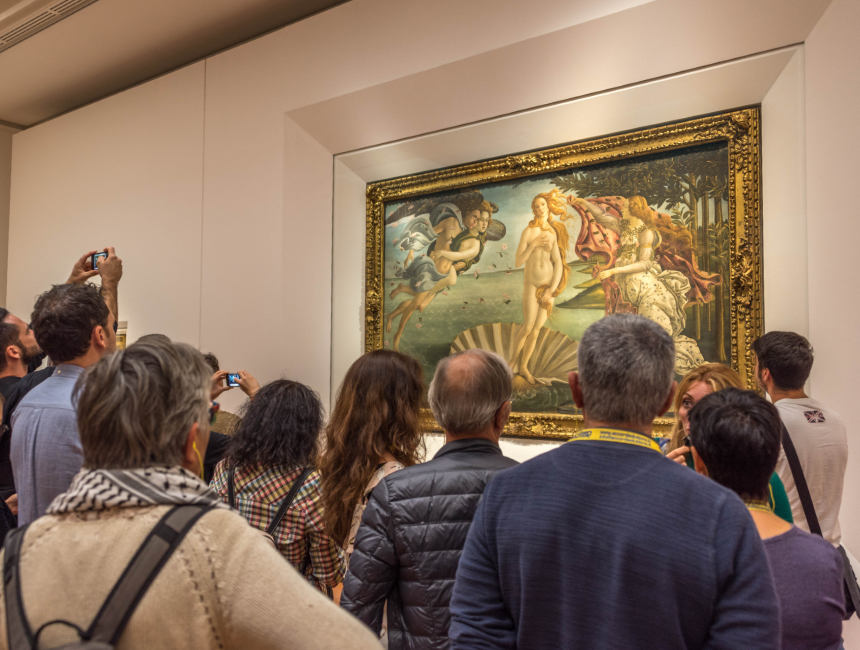 The ‘Birth of Venus’ by Botticelli. Probably the best known work of art in the Uffizi gallery! 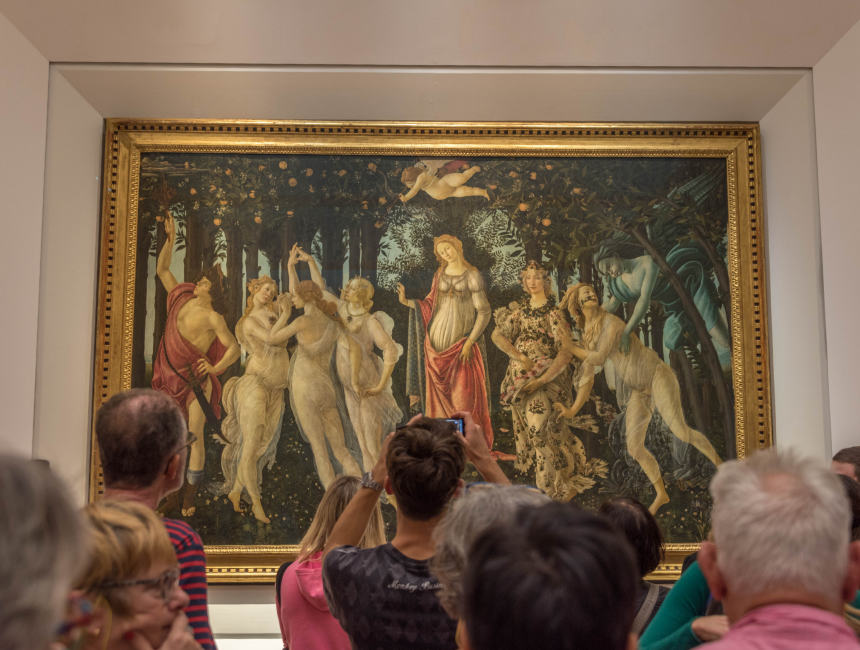 Another masterpiece! ‘La Primavera’ or ‘Spring’. 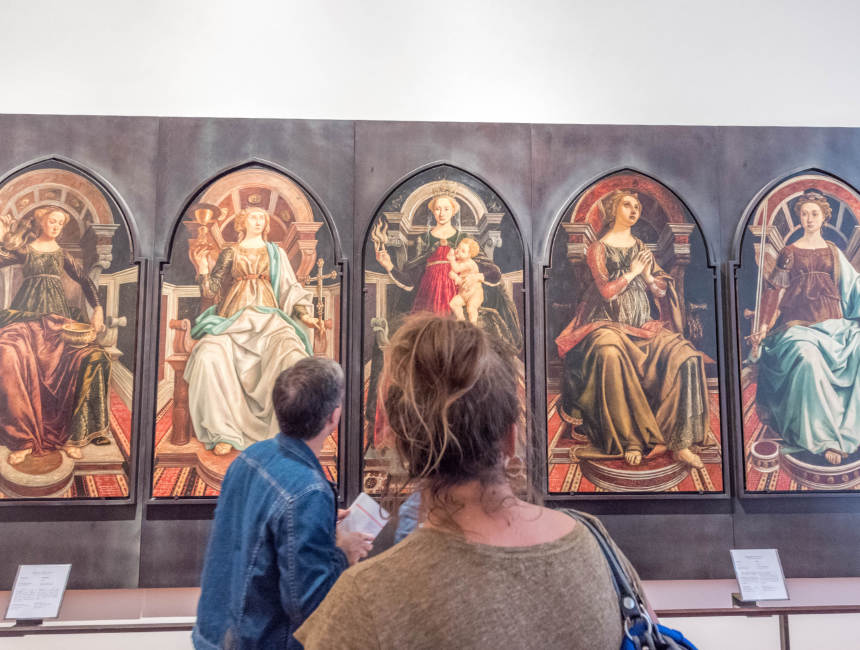 My personal favorite of Sandro Botticelli. A painting made out of seven panels, which portray the seven virtues. In fact only ‘Fortitude’ is painted by Botticelli. All the others are painted by his pupil; Pietro Pollaiolo.

Leonardo da Vinci is perhaps one of the most brilliant people that ever walked on this globe. He had hundreds of specialties and talents and is thus the perfect symbol of the uomo universale.
Next to being an architect, scientist and inventor, he was (among other things) a loved artist.
His Mona Lisa is probably the most famous painting in the world. This piece of art can be admired at the Louvre, but fortunately there are some other works of art which are located in the Uffizi which are definitely worth a visit. I immediately think of ‘The Baptism of Christ’ or ‘Annunciation’. This room should definitely not be missed when visiting the Uffizi museum. 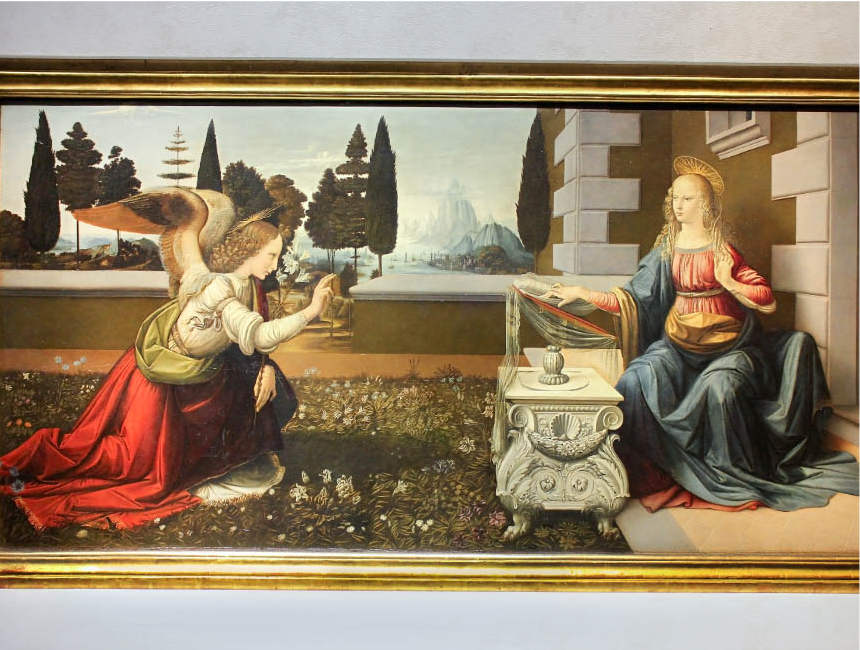 Hall 35: Michelangelo and the Florentines

Culture barbarians (and kids) associate the name Michelangelo in the first place with one of the Teenage Mutant Ninja Turtles and not with the Italian artist who basically created Renaissance art.
World famous are his frescoes in the Sistine Chapel and the dome of St. Peter’s Basilica. But the Uffizi gallery in Florence also houses a masterpiece of his: the Tondo Doni, the only painting of him that is still in Florence. It’s also the only artwork he ever created that can be moved (and isn’t painted on a wall). 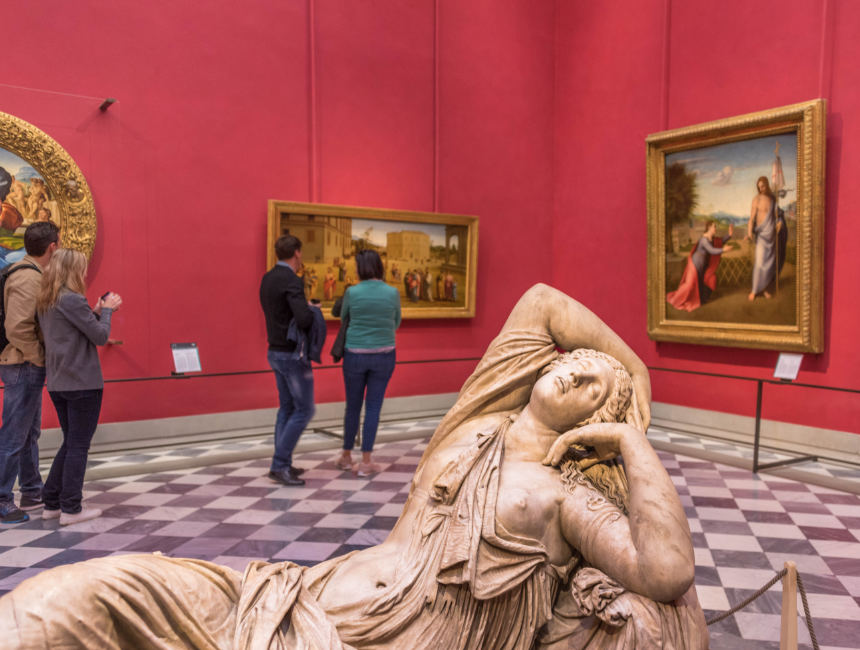 Hall 35 of the Uffizi museum. On the left you can see Michelangelo’s painting. (Sorry that you only see it half, but I forgot to take a picture of it…)

Titian or Tiziano was a great portraitist and therefore all the wealthy and famous European nobles wanted to be immortalized by him on the white canvas. Titian belonged to the Venetian school, which puts more emphasis on the colors, rather than the drawing like the Florentine school. You can clearly see this in his beautiful Venus of Urbino, just like nine other paintings of him that are exhibited here.

Raffaello Sanzio is better known as Raphael and is one of the most renowned Italian Renaissance artists.
Famed for his portraits, ‘Madonna del Cardellino’ is a beautiful and elegant work. It’s a pity that he died at the age of 37, because he could have given us so many other masterpieces. Some may find him overvalued, but you that doesn’t change the fact that he obviously possessed quite some talent. 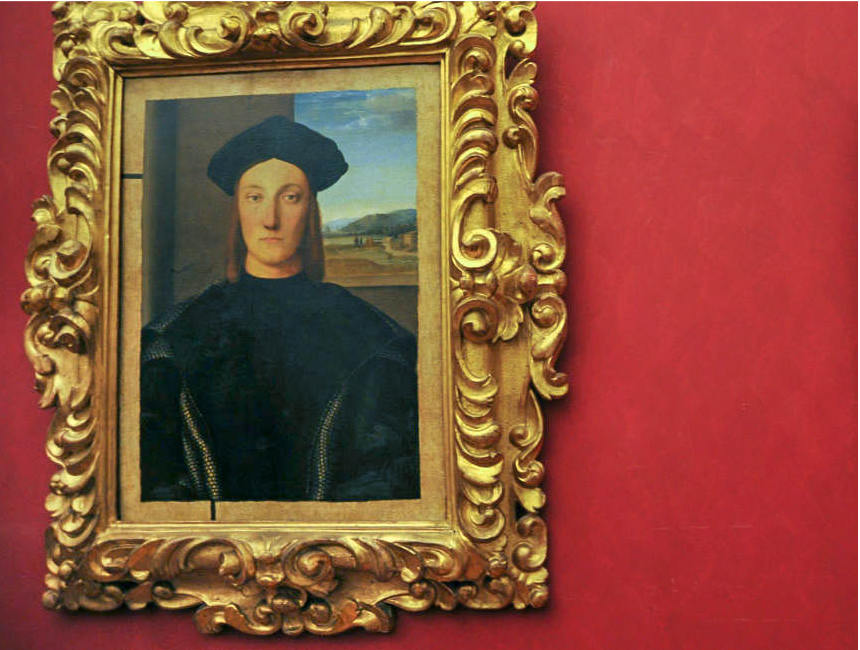 Raphael of course can’t be missed in this giant art collection.

Michelangelo Merisi dal Caravaggio has become famous worldwide for making the technology of chiaroscuro (clair obscur) a true art. He controls the contrast between light and dark as no other.
In the Uffizi museum you can admire three of his masterpieces and his Medusa is perhaps the most famous. You know her as the mythological monster with snake hair and those who she looks at immediately change into stone. Fortunately, the hero Perseus cut off her head so that she could no longer wreak havoc. According to the myth, Medusa’s face is Caravaggio’s self-portrait when he was younger. Whatever the truth is, it’s a particularly beautiful piece of art. 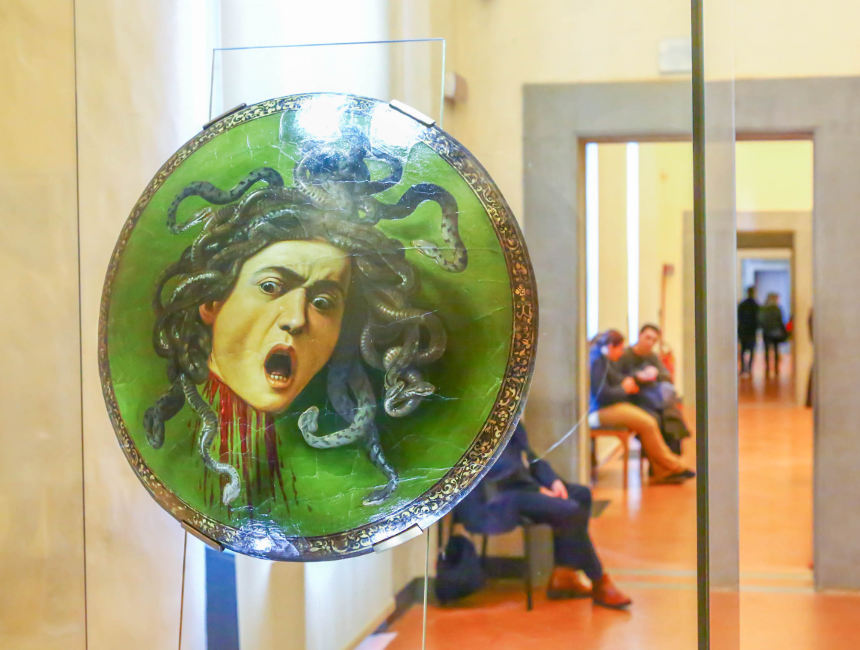 Another grand work of art in the Uffizi. The Medusa of Caravaggio.

Of course there are many more halls that are worth the effort to discover. In addition to these spaces packed with priceless art, the corridors and hallways that connect all of this with each other are also particularly beautiful. Thousands of statues are sculpted in beautiful poses as if it were nothing. The white marble figures are by no means the only beauty in these rooms! Look at the beautiful ceilings and walls. They’re occupied with precious frescoes and paintings. This is an art gallery in itself!

Additionally, these walkways provide very nice views of other sights in Florence. At some point, for example, you get a nice view of the Ponte Vecchio. 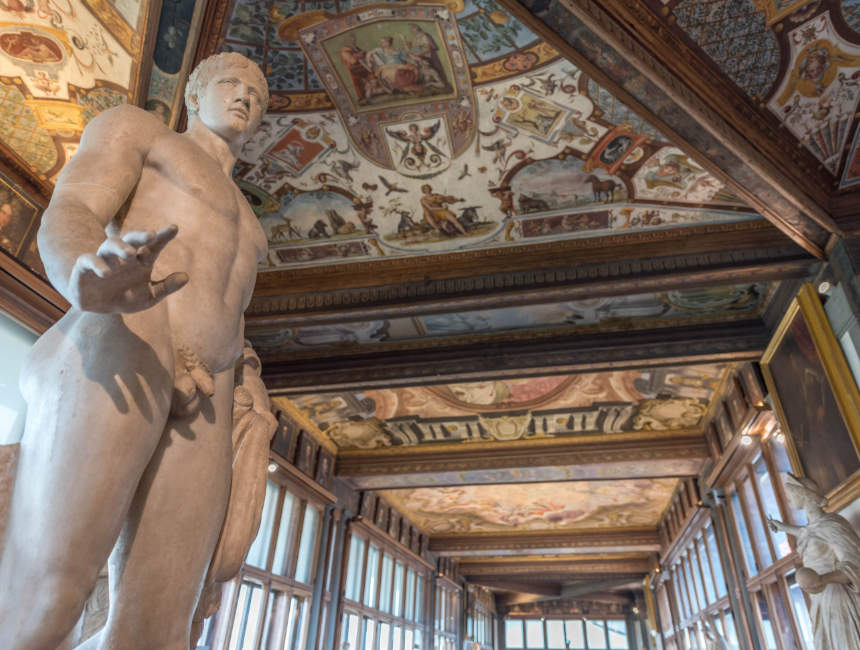 At least equally impressive are the hundreds of statues scattered throughout this huge building. 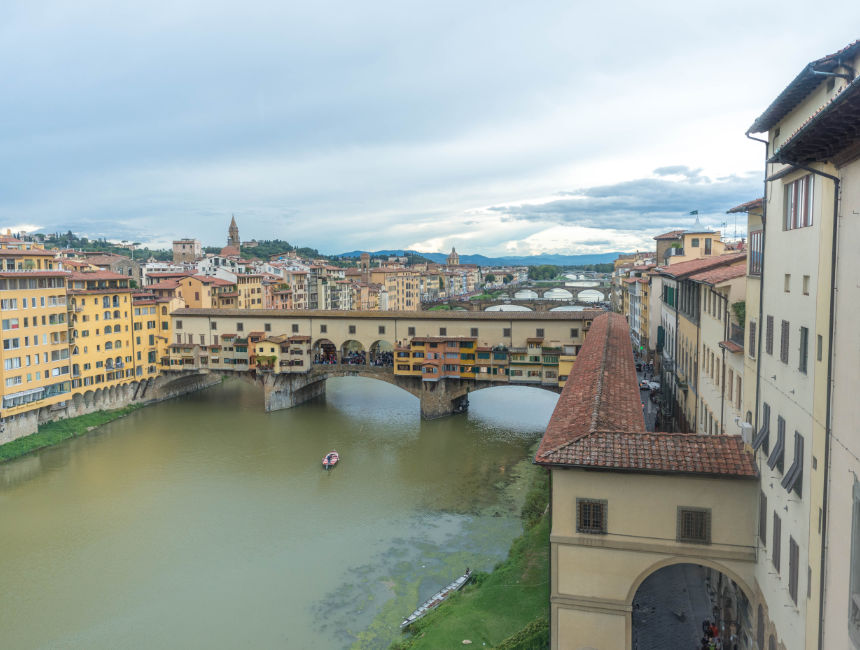 The view on the Ponte Vecchio from the Uffizi.

Tickets for the Uffizi in Florence

You can buy the tickets very easily via this website, which costs you 16.5 euro plus 6.5 euro service charge (total €23). Curiously, online ticket vendors offer the same tickets for a lower price (€20.50). Of course you can also book a guided tour. For this you pay about ten euros extra.
If you reserve online tickets for the Uffizi in Florence in advance, you don’t have to wait in line anymore.
If you don’t mind losing precious time, you can also buy tickets at the Uffizi itself. Here it costs 12.5 euros per person. If you are a citizen of the EU and between 18 and 25 years, you pay only half.

Another thing to keep in mind: Every first Sunday of the month you can enter for free! It sounds nice, but be warned: the Uffizi will be even more crowded on these Sundays!

An audio guide is available in Italian, English, French, Spanish, German and Japanese and costs six euros for one piece and 10 euros for two devices.

Would you like to book online? Whether to arrange tour tours, guided tours or skip-the-line tickets? Then look below:

» All tickets for the Uffizi 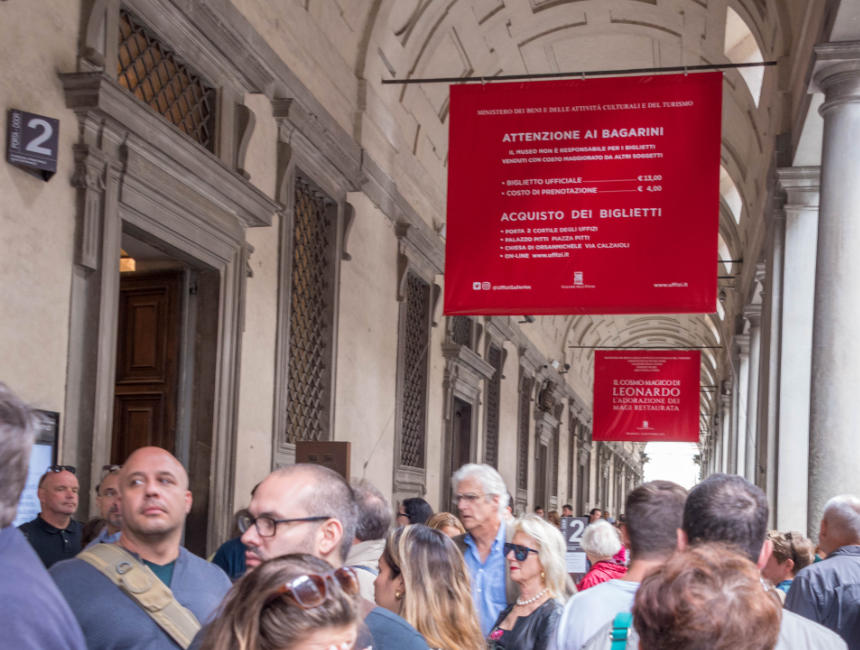 The waiting lines for the Uffizi can get very long… For only a small surcharge you can buy skip-the-line tickets, and I honestly recommend that.

Best time to visit the Uffizi

It’s always very busy in the museum, but the peak months are undoubtedly the holiday months of July and August. Just after lunch (1 pm-3pm) and the end of the day are perhaps the ‘calmest’ moments.

You can spend a whole day in this fantastic museum, but if you just want to see the most famous works, you’ll need about two hours.

If you stay in Florence for at least three days and are planning to visit a number of museums, it may be interesting to invest in a Firenze Card.
This card gives you priority access (so you don’t need to queue up anywhere) in no less than 72 sights of Florence! It’s valid for 72 hours and costs 72 euros (and is free for EU citizens under 18).
You only have to make reservations if you want to visit the dome of the Cathedral, so reserving a spot to get in the Uffizi is not necessary. All other top attractions (Uffizi, Galleria dell’Accadamia, Giardino di Boboli, …) are also included. You can buy this handy card both in shops throughout the city as with online ticket sellers. 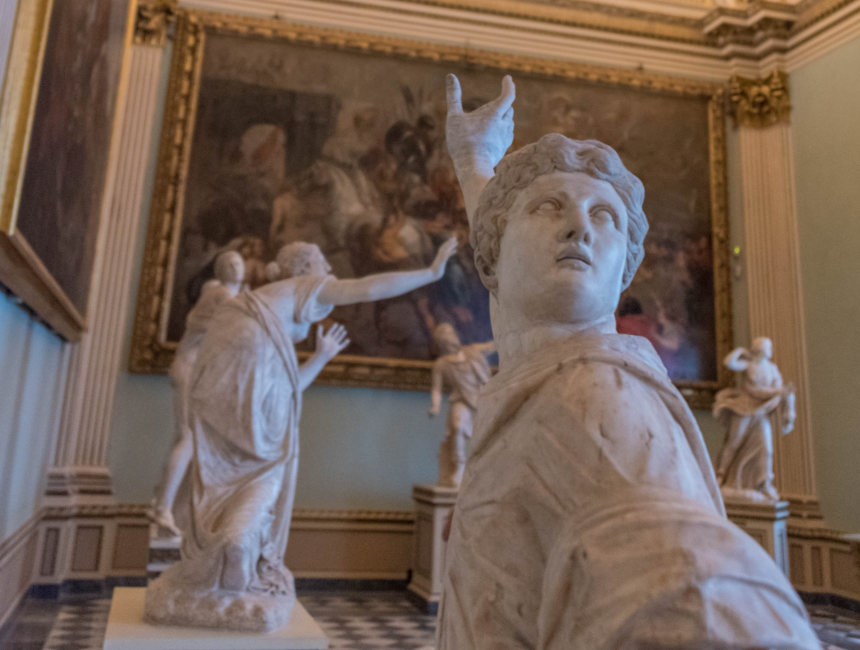 One thing is certain… You can spend hours in the Uffizi!

After reading this article, I don’t think you can skip the Uffizi when visiting Florence anymore. Even if you’re not an art lover, with so much beautiful art there must be something that you like.
Florence is a fantastic city and once you visit it, you’ll soon know why! 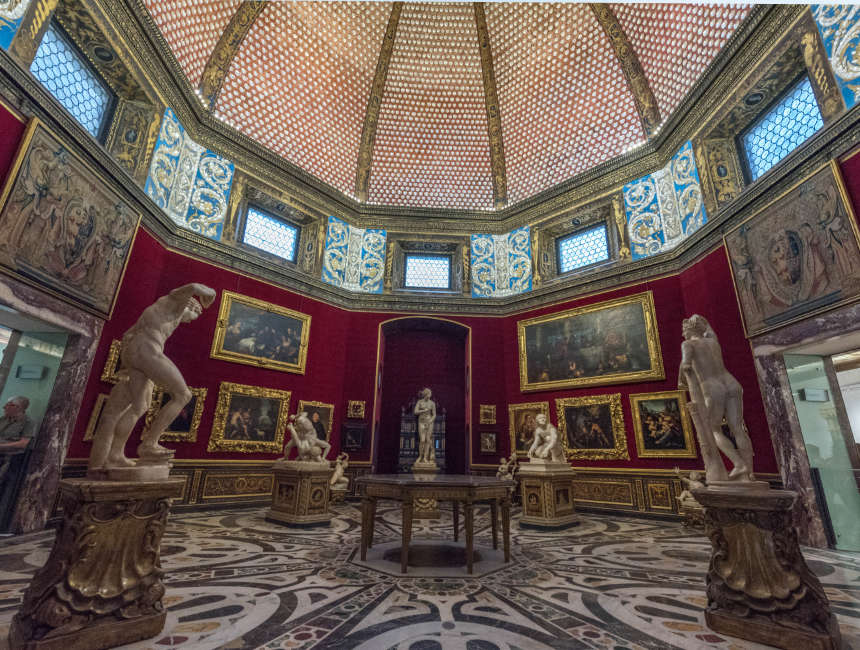 The Uffizi gallery of Florence breathes art! Even the building itself is magnificent!