Luxembourg has many castles, but none is as known as Castle Vianden. This gigantic fortress towers over the Luxembourg Ardennes and has an interesting history. Even if you don't like these medieval castles, I still recommend a visit to Vianden. The village around it is beautiful and without a doubt one of the most beautiful places in Luxembourg! 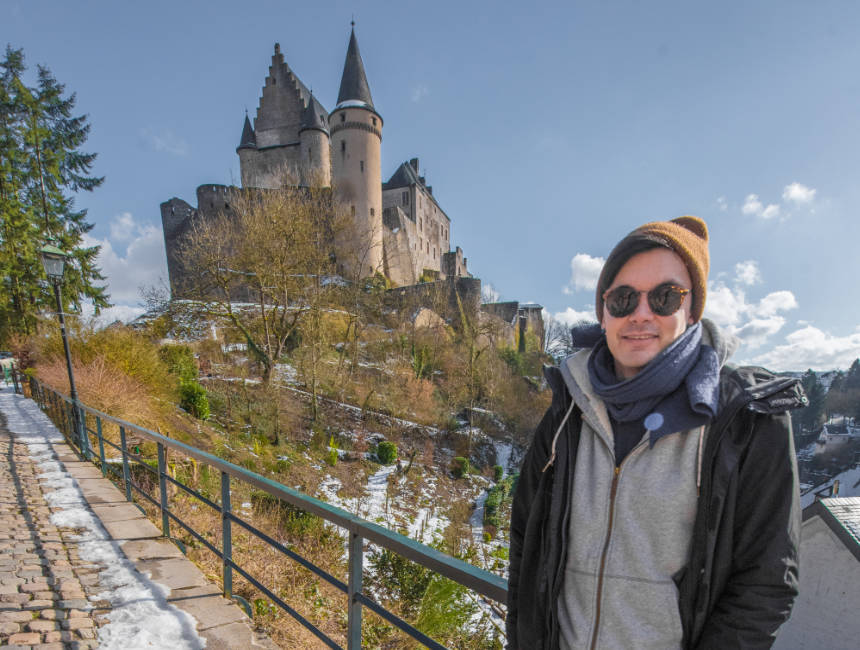 Vianden Castle had a very turbulent existence. It endured several dynasties, some natural disasters, a lot of construction work and quite a few wars. It might be called a wonder that you can still visit this beautiful castle today!

The base of the castle was created by the Romans many centuries ago. Later on, a refugium was built at the same location, a sort of refuge for people from an abbey or monastery.
Actually, it was only from the eleventh to the fourteenth century that much changed in the castle. In the beginning it was still the Romanesque building style that influenced the construction of the castle, but a few centuries later it was mainly adorned with gothic influences.

After the sixteenth century, very little happened with the castle, causing it to fall into disrepair. King Philip II of Spain had conquered the castle from William of Orange, but didn’t do much with it and decided to give it to the Counts of Luxembourg as a gift.

Fast forward to the nineteenth century. The castle had already fallen into disrepair and the then owner decided to sell the castle for a penny. The savvy buyer sold almost all the valuables that were in the castle (even roof tiles, doors and windows were pawned!), so that the once powerful fort was actually turned into a ruin.

That was not to the liking of the then count of Vianden, at the same time also a king, and so he bought up the dilapidated building and started to redecorate it. The Belgian revolution, the first world war and the second world war ceased a quick renovation, but in the end all eventually was restored. In 1982 the castle was finally finished and eight years later Castle Vianden was also decorated with an interior made as authentically as possible. 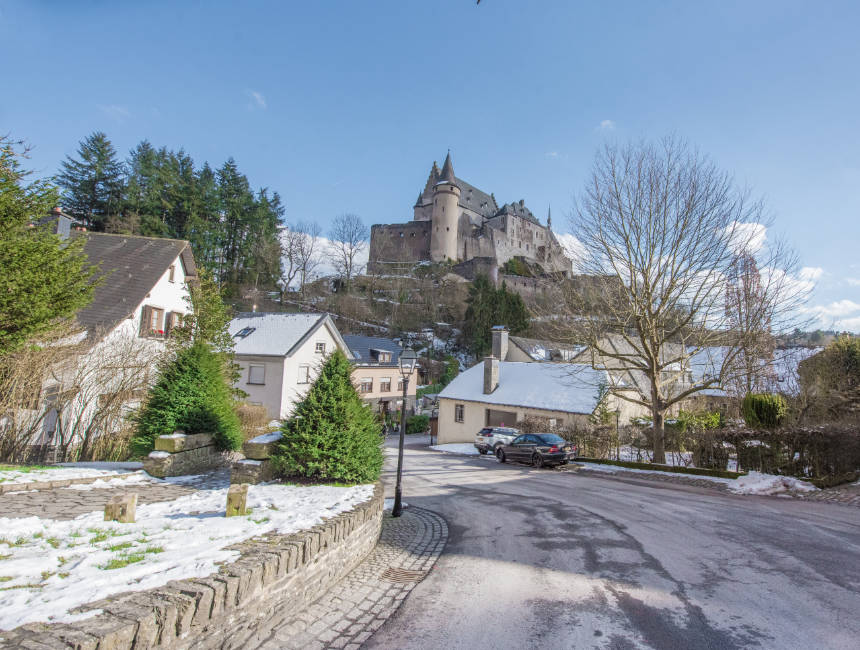 From wherever you look at Castle Vianden, it always looks breathtakingly beautiful!

The exterior is of course the most striking. The stately castle is places in a beautiful setting and it therefore emerges as a full-fledged supermodel. From wherever you take pictures of the fort, it’ll always look beautiful.
There is a lot to see inside the castle as well, of course. I scribbled down the nicest sights:

The courtyard – From here, you enter the castle and leave again. The 90 meters (295 ft) long courtyard encircles the castle, and while you walk here you also pass some beautiful doors and gates. To get to the courtyard you first have to cross the castle bridge. Fortunately, it’s now permanently opened and you don’t have to find another way to climb into the castle.

The weapons hall – After you have bought your admission ticket, this is the first door you can enter. This large space is characterized by the beautiful columns that turn into arches in the ceiling. You’ll see a big scrapheap between these concrete mastodons. No really! The metal harnesses that you see here are from the Middle Ages! The stately statues immediately welcome you. In the adjoining room you can also see some sharp weapons with which they fought in the Middle Ages, but also some beautiful muskets and other detailed weapons of times long gone. 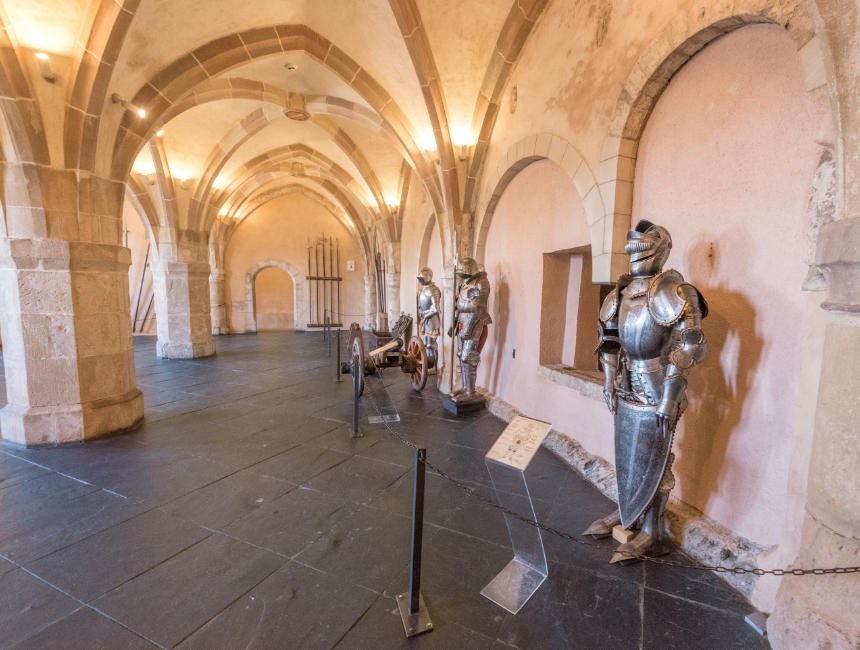 The weapons hall is the first large room that you can visit.

The chapel – On the site where the roman ‘castellum’ once stood, a stately chapel was later built. I noticed the colorful columns and ceiling immediately, but the audio guide also tells you some fun facts. For example, the wealthy nobility was cleverly separated from the ordinary mob by means of a level difference in the chapel. Once the church in Vianden had been built, the ordinary people couldn’t come here any more.

The large kitchen – This was my personal favorite room in Vianden castle. This strange kitchen is filled with all kinds of authentic appliances where the food was prepared in former times. It reminded me a bit of the kitchen in the Downton Abbey TV series. Or maybe it looked a bit like Harry Potter? In any case, the fake food all looked damn delicious!

The archaeological crypt – From the weapons hall you walk into the archaeological crypt. Here you can see the foundations of the original castle. Personally I found this very interesting because there are different models (and drawings) that show you how the castle has evolved over time. So you see that the original fort was much smaller than the stately castle that it eventually became.
In addition to these models, you can also gaze into the depths of the excavations, but I myself didn’t get much wiser from that. At the back of this room you can also see some utensils that were excavated from the different periods that Castle Vianden was inhabited. 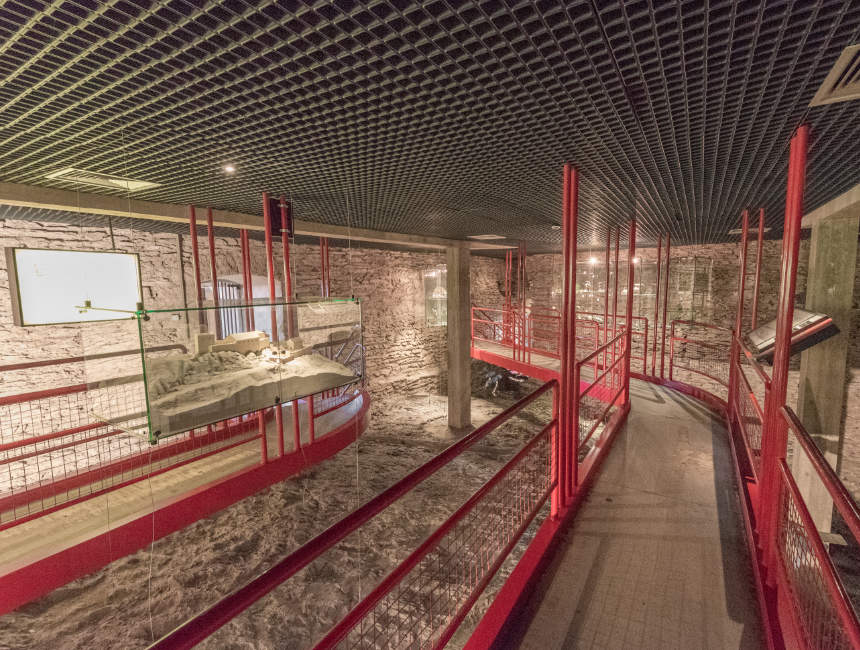 The archaeological crypt. On the left you can see one of the models of the castle in former times.

The courtyard on the second floor – When you have climbed the narrow stairs, you reach a second courtyard. From here you get the best view from Vianden Castle. In good weather you can easily look a few miles over Luxembourg. During the winter it can get very slippery here, so watch out!

The Byzantine gallery – After walking through the courtyard through a bright white corridor, you reach the Byzantine gallery. The beautiful open windows reminded me a bit of a fairytale of a thousand and one night. Although I found this space very beautiful, it was a pity that the right side (from where you have a beautiful view over Vianden) was closed off for safety reasons. It would of course be a deep drop if you lean too far out of such a window…

The bedroom – The nobility must of course also sleep! Don’t visit this room if you’re drowsy, because the four-poster bed looks incredibly comfortable! Besides the beautiful bed you can also see some other furniture from the Middle Ages, as well as a book and some paintings and tapestries. 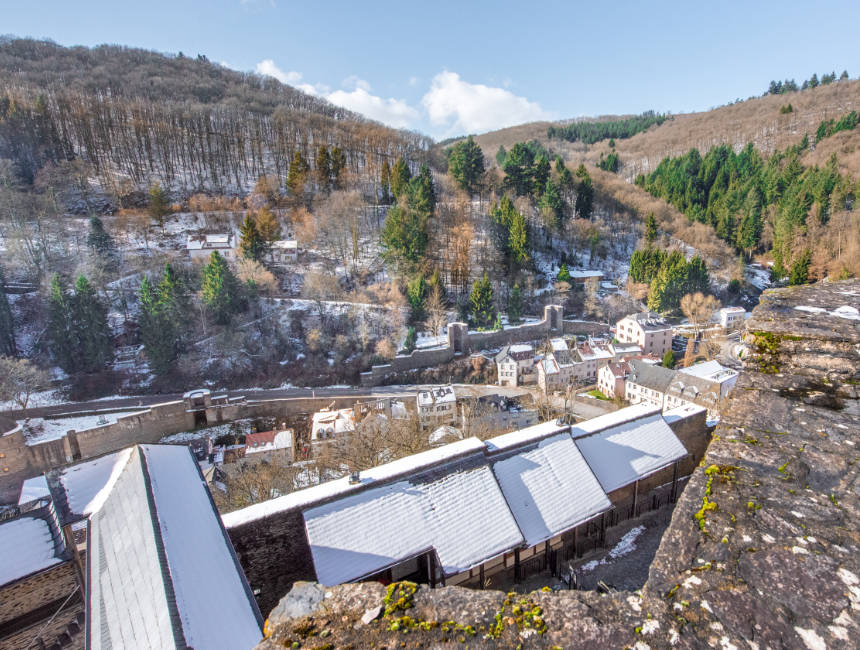 The view from the courtyard on the second floor.

At the top you’ll find a large room with all kinds of historical photographs and models of Castle Vianden. You’ll see, among other things, the reconstruction process of the fort, some paintings and drawings of what the castle looked like in the Middle Ages and how strongly the castle was battered after years of being unused.
Here are also some windows through which you can (try to) look. But you don’t really see much here. 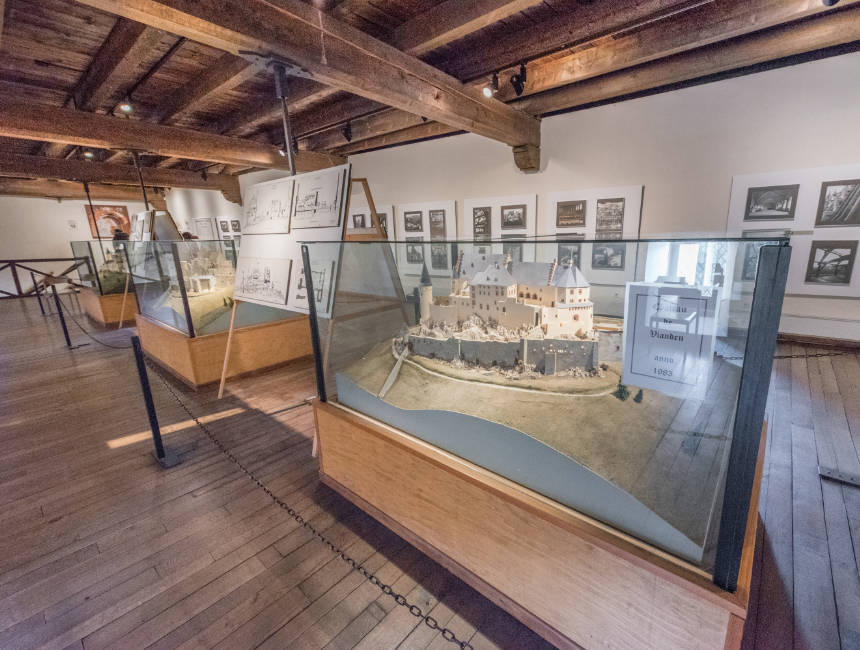 On the third floor you’ll find an interesting presentation about the history of the castle.

When you descend from the higher levels of the castle, you end up back on the courtyard. Don’t forget to also visit the cellar. This large space is behind a door that you easily walk past! Formerly this basement was used to house everything and everything, but nowadays it has been transformed into a kind of medieval banquet hall. I immediately had to think of a medieval pub, and next to the stairs you see some gigantic beer kegs that only confirm that atmosphere. 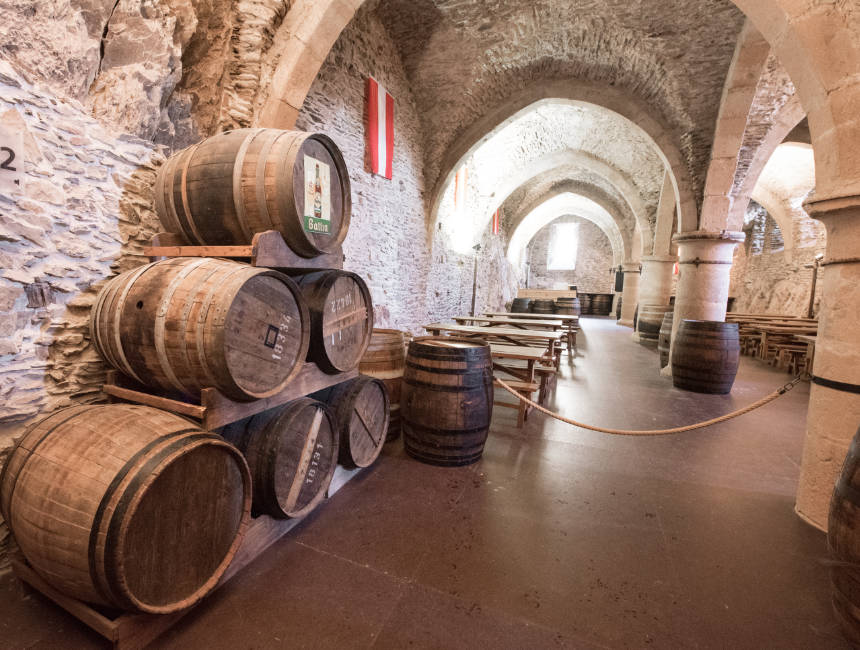 Are you thirsty? Then you shouldn’t skip the cellar!

You pay €7 per person to get in (cards are accepted, but only with a minimum amount of €10).
For an audioguide you pay €2 extra. These are available in a lot of languages; English, French German, Dutch, … One audio guide for a family is enough, because you can also just put it on loudspeaker.

Whoever got hungry or thirsty after their visit can take a break in the restaurant close to the exit. For €2.50 you get a soft drink or coffee and for a grilled ham and cheese sandwich or a small pizza you pay €3.20. 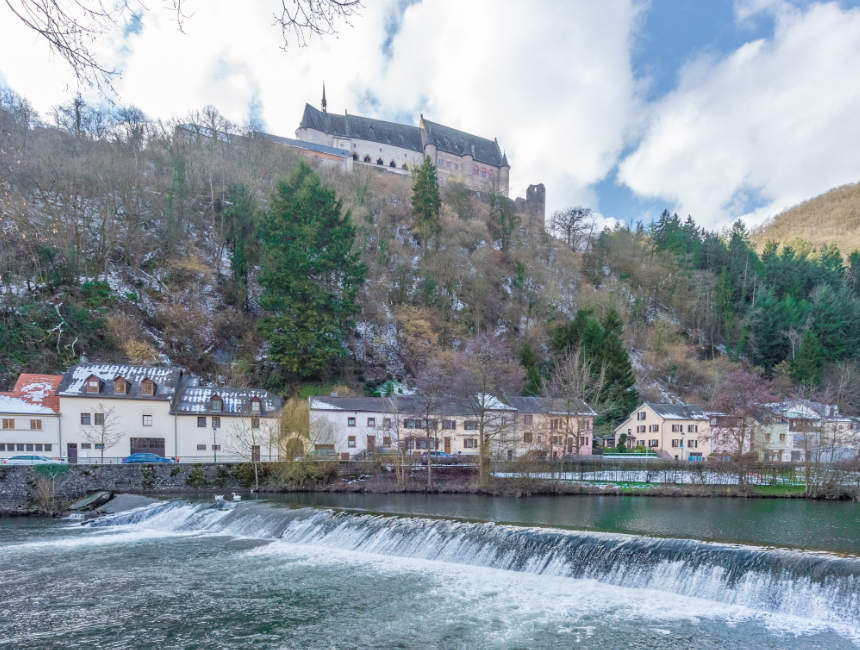 Don’t forget to walk around the village after your tour. From everywhere you get an amazing view of the beautiful fort!

The 5 best places to visit in Luxembourg