During our road trip through Birmingham some Belgian bloggers and I also went to the beautiful Warwick Castle near Stratford-Upon-Avon.
This spectacular castle was already built in 1068 by William the Conqueror. The building survived wars, looting and all kinds of natural disasters, but is still standing. It may be a few centuries old, it's anything but a dusty old thing! You'll find a lot of historical splendor, but also fun activities for the kids. So it's actually the perfect day trip for a family!
Once the base of the world's most powerful man, now a great tourist attraction in the beautiful England. I would like to tell you more about this beautiful castle.

Check out prices and availability here. 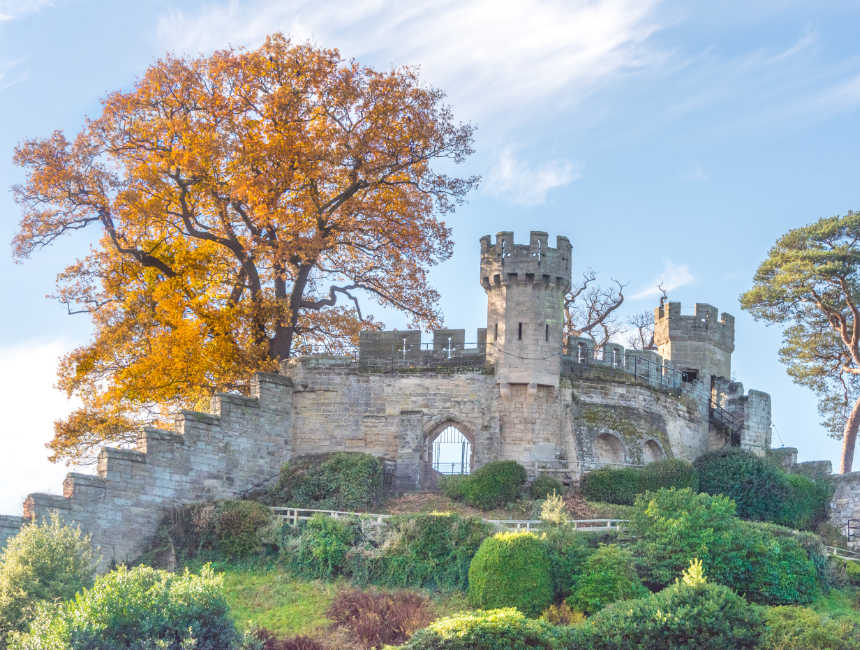 In 1068, William the Conqueror ordered a motte-and-bailey castle to be built on the spot where an old fort once stood. Within the fortress walls there was once even a church! But a pious bishop didn’t think it belonged here and had it broken down again in 1127. The stone castle was actually only built under King Henry II. There were added a lot of extras later on, mainly to boost the security of the castle.

Warwick Castle pretty much was involved in all the wars in which England was involved. As a result, it has known a lot of (over)rulers, and has thus left its mark on European history.

The castle has been opened to visitors since the seventeenth century. In 1978 it was bought by ‘the Tussauds Group’ (yes, the same as that of Madame Tussauds!), who transformed it into the tourist attraction that it is today. 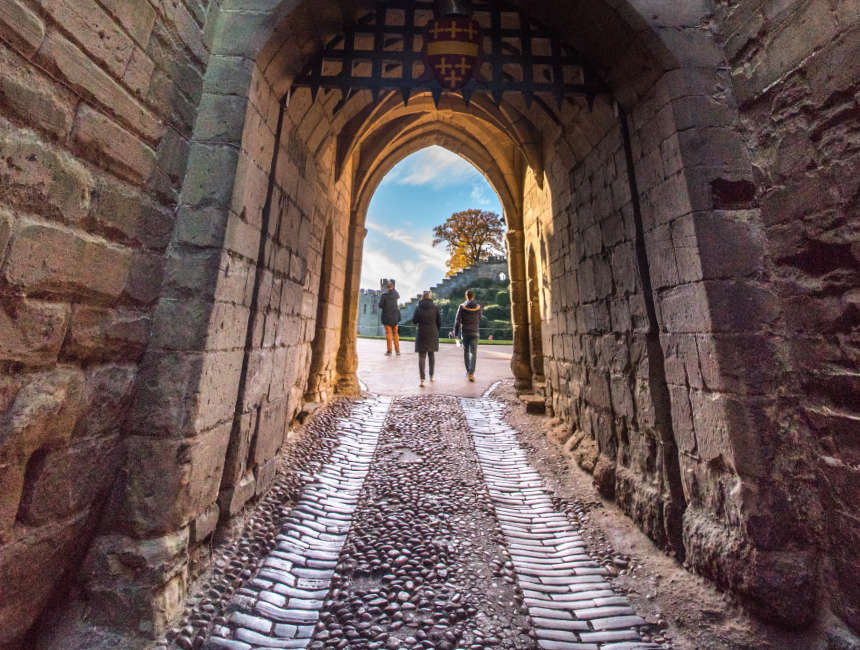 Nowadays you can visit the castle, but this entrance gate was inaccessible for a very long time for the hoi polloi!

The whole castle complex is filled with various things to see and activities for young and old.

In the castle you’ll find beautiful exhibitions that perfectly represent different periods. Luxuriously decorated rooms with valuable objects, shiny candlesticks, gigantic chandeliers and wax figures dressed up according to the fashion of that time, grace the interior of Warwick Castle. But also the gardens of the castle, the watchtowers and of course the dungeons can be visited. 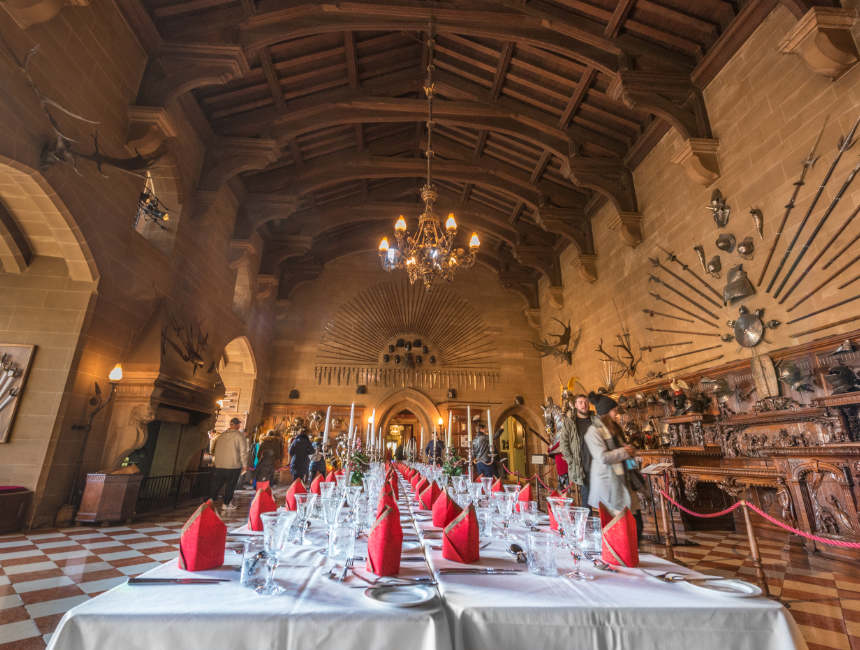 Sometimes, Warwick Castle made me think a bit of Harry Potter!

There are four exhibitions to be visited, each time on a different subject and in a different period of time: Death or Glory, Kingmaker, Royal Weekend Party and Ghost Tower.

Death or Glory
In this exhibition you’ll learn everything about the history of warfare. For example, you can see some painful-looking torture devices, you can hold a sword yourself (damn heavy!) or you can just watch some other medieval weapons.

Kingmaker
This exhibition reflects well what it was like to live in the castle in times of war. The tour guides takes you past the stables where horses whinny, the smithy where sharp weapons are made, but also laundries, tailors and tentmakers were important during wartime!

Royal weekend party
Slightly less medieval is the Royal Weekend Party exhibition. In 1898 a large dinner was held for some prominent guests at Warwick Castle. To make it feel as if you were there, twelve rooms are decorated with wax statues that make this nifty party look perfect. Compare the wax statues with the real guests, which you can view at the end of this tour on photo’s taken back then.

Ghost tower
A huge chateau like Warwick Castle must of course have a few ghost stories as well. The best known phantom of Warwick Castle even got his own exhibition! Fulk Greville was a former count of the castle and was murdered cold-blooded by one of his servants. During this live-action show you’ll hear all bloody details. Exciting! 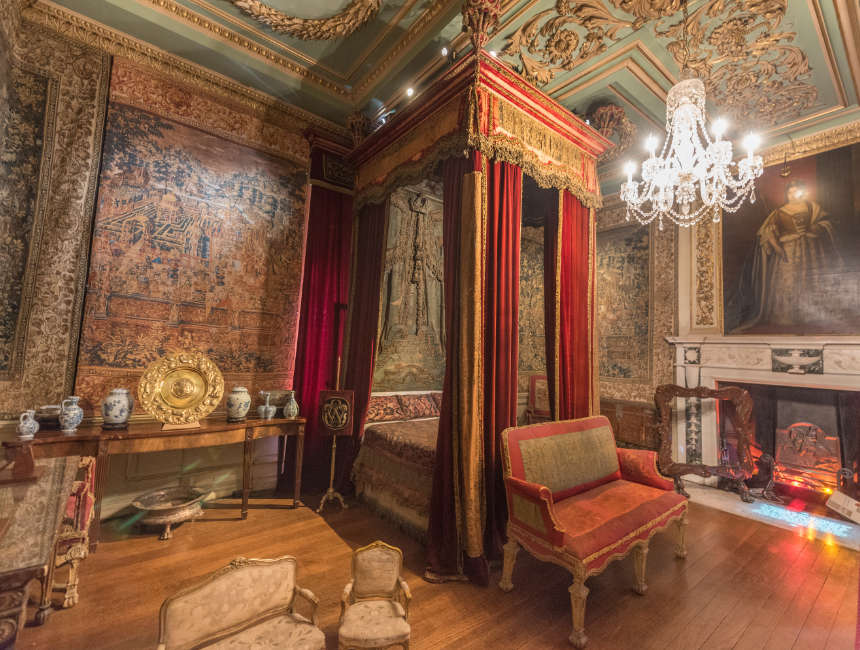 Luckily I didn’t get too sleepy in the castle. Because otherwise I would never want to get out of this comfortable bed anymore!

If you like to get a great viewing point on the castle grounds, then you shouldn’t skip the watchtowers and ramparts. Climb the armory for a phenomenal view over the castle, the Avon river and the town next to Warwick Castle. From here you only really realize how big this domain is.

When you have visited the watchtowers, you end up in the dungeons under Caesar’s Tower. Here, prisoners of war from the Hundred Years’ War and the Rose Wars weren’t treated so well… The torture devices with which they were tormented are exhibited here.
People can be so cruel!

The gardens of Warwick Castle

The domain of Warwick Castle is colossal! Around the castle there’s several square miles of green grass, and the Avon river even flows through the domain. The most beautiful green part of Warwick Castle is the courtyard. There you can see beautifully manicured gardens and you can also climb the landscaped hill, from where you get a nice view over the castle.

Activities for children (and adults)

If you’re traveling with children, there’s also a lot to do in and around the castle. The beautifully decorated halls make Warwick Castle resemble scenes from the Harry Potter movies. With a little bit of imagination your kids will have a magical time!
On the castle grounds you’ll also find a spectacular maze and a thrilling bird of prey show. And honestly…They’re fun for both young and old. 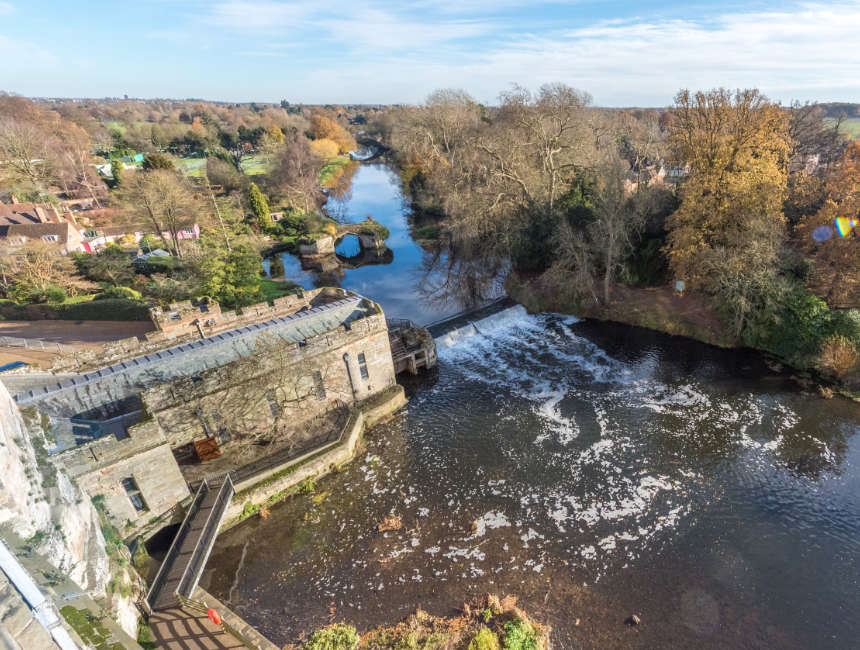 The domain around Warwick Castle is huge! You’ll almost need a full day to explore everything here!

Warwick Castle is a very popular sight in England. Therefore there’s plenty of possibilities to visit the fort. I sum up the best ways to get there:

With our rental car from Sunnycars we did a road trip to some attractions around Birmingham, including Warwick Castle.
Driving on the left is easy, and renting a car in Birmingham is certainly not unaffordable. The big advantage is that you can see much more in one day instead of public transport.
We parked in the parking lot of Warwick Castle and a few minutes later we stepped through the entrance gate of the castle. The rest of the day we could also easily plan in some other sights.

From London, or just about every major city, several trains a day travel to Warwick. From Warwick Station it’s a half hour walk to this imposing castle.
If you prefer not to waste too much time with queuing for tickets, you can purchase your ticket online or buy a combi ticket with your train ticket. Pay attention, because there are several train companies that ride the train tracks of England! Only ‘Central Trains’ offers this combi-ticket.

From London you can also visit Warwick Castle on a day trip. The advantage of these tours is that they can often be combined with other attractions in the area. Think of Shakespeare’s Stratford-Upon-Avon, beautiful Oxford and the picturesque Cotswolds.
A combined ticket costs between €60 and €100 / $72 and $120 / £53 and £89 per person, and all transport and admission tickets are included. 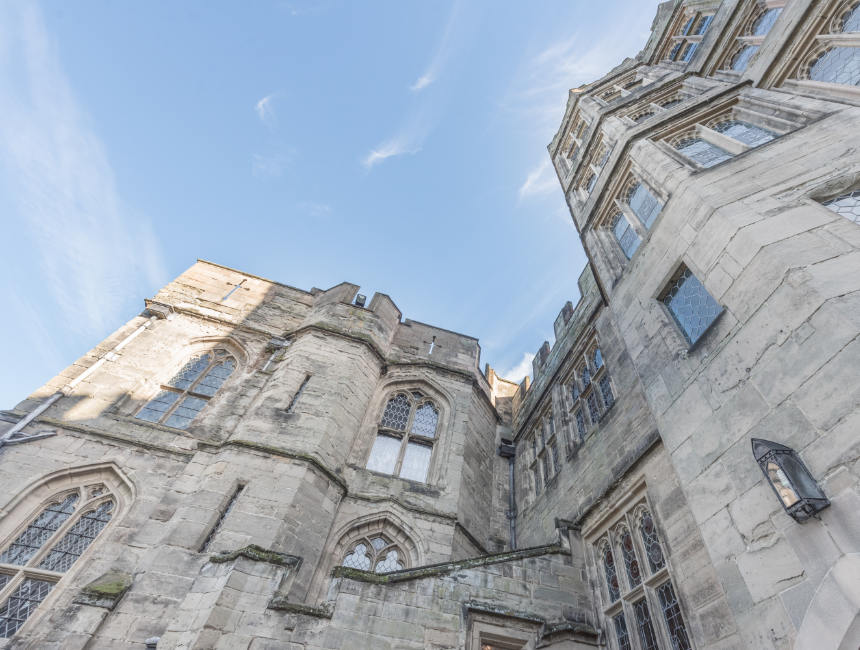 The big castle now has a lot of exhibitions and rooms that you can visit. In these chambers it’s beautifully displayed how the interior must’ve looked like quite some time ago.

Would you like to visit Warwick? Take a look at these offers, as well as tours to some other places of interest nearby:

» All tours and excursions to Warwick Castle

Spend the night in Warwick Castle

Do you want to have the complete experience? Then you should book an overnight stay at Warwick Castle!
You have three options. Either you sleep in the ‘woodland lodges’, go glamping in a medieval tent camp or get a luxurious room in the Tower Suites, located on the fourteenth floor of the Caesar’s Tower.

If you are fond of the Middle Ages, then you should combine your visit to Warwick Castle with Stratford-Upon-Avon, the birthplace of William Shakespeare.
Both villages are a few kilometers apart from each other and can easily be visited in one day.

The easiest way to go from one place to another is by car, but there are also possibilities by train. Are you taking public transportation? Then plan in advance, because the connections are not very good.

Of course you can also arrange a day tour from London to both Warwick Castle and Stratford-Upon-Avon. This can be done by car, train or tour. 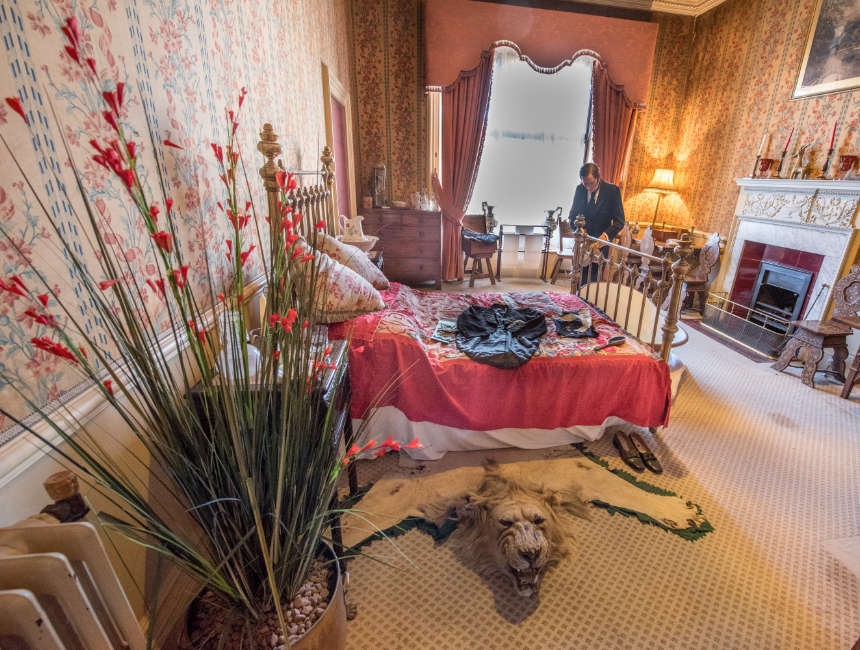 It’s crazy how amazing these wax sculptures look! A couple of times I actually thought it was a real person!

Some fun facts about Warwick Castle 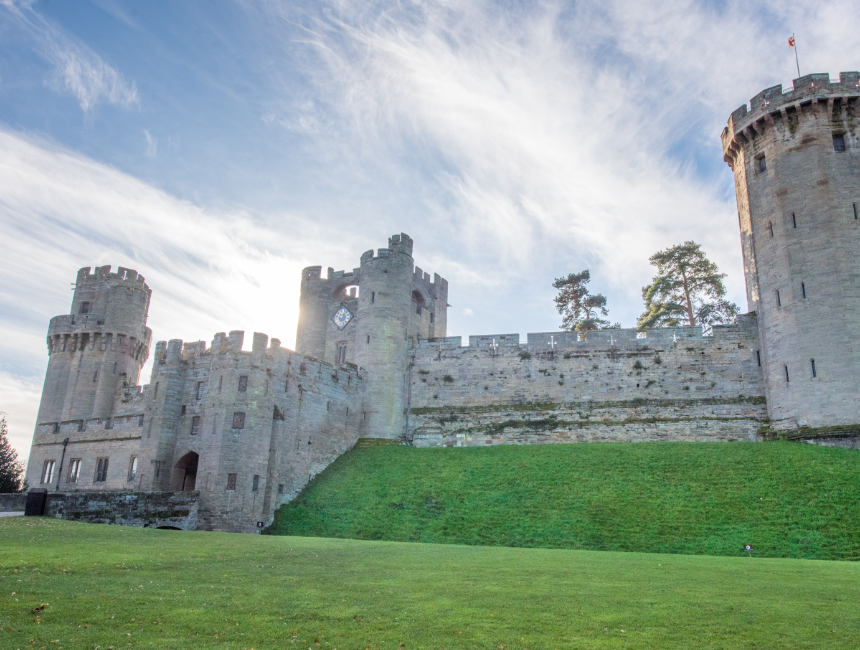 A day tour to Warwick Castle is fun for young and old!